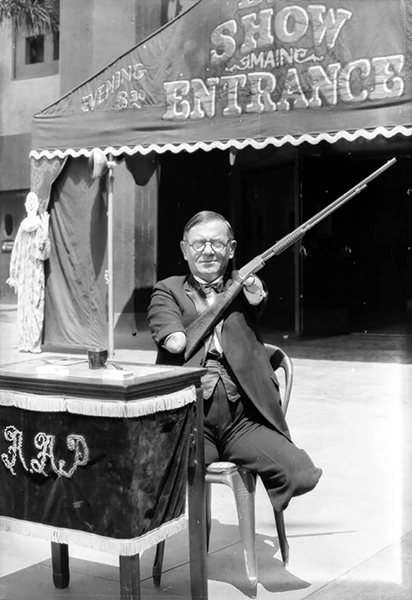 Albert A. Pilgrim was born with stubs for arms and legs around 1880-81, His birthplace was Shippensburg, Pennsylvania. At the age of ten, his mother briefly booked him in freak shows in his home state. However, his mother’s participation did not last. In 1891, Pilgrim signed with a “freak manager,” who booked him at carnivals, fairs, and “dime museums” across middle America.

As a young man, Albert Pilgrim briefly toured with a wild west show as “Willie the Wonder.” In 1904, he met and married Kansas native Emma Frye, an attractive horseback rider also working at the same show.

After the wild west tour ended, Pilgrim operated his own peep show and worked as a street performer. His peep show featured photographs of tornadoes and other natural disasters caught on film. However, as a street performer, Pilgrim amazed crowds by embroidering with a needle clenched between his teeth. He could also draw pictures and sign cards with a pen in his mouth.

Pligrim also promoted himself as a sharpshooter! However, in 1909, he accidentally shot his 18-year-old male assistant in the shoulder with a .22 during a stage performances in Kansas. At the time, he was trying to use a mirror reflection to shoot an object off of his assistant’s shoulder.

Albert and Emma bore two daughters: Jenelle (more likely spelled Janelle) (b. 1906) and Evelyn (b. 1909). Details about their family life are not known. However, Emma probably worked regular jobs to help support the family.

By 1920, the Pilgrims had moved to Los Angeles. While there, Emma worked as a salesperson for a dry goods store, and Albert worked “vaudeville.” Three years later, the family moved to Long Beach, where Albert likely performed at the Pike Amusement Park’s carnival section.

By 1930, Albert A. Pilgrim was dead and Emma lived in Brawley, California.