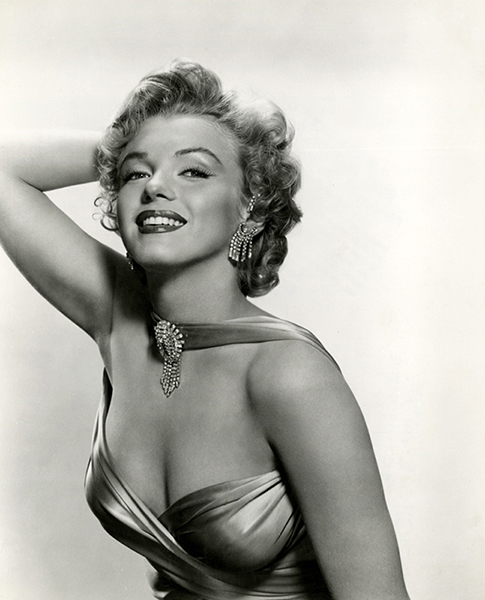 “All this publicity makes me a little shy and afraid. I’m afraid that people will expect too much of me, right now when I’ve only started my acting career.” — Marilyn Monroe in 1952.

“My father’s occupation is listed as ‘baker’ on my birth certificate, but that isn’t why they called me Norma Jeane Baker. My mother was married when she was 15, in Mexico, and Baker was her first husband’s name. My grandfather was a housepainter.” — Marilyn Monroe 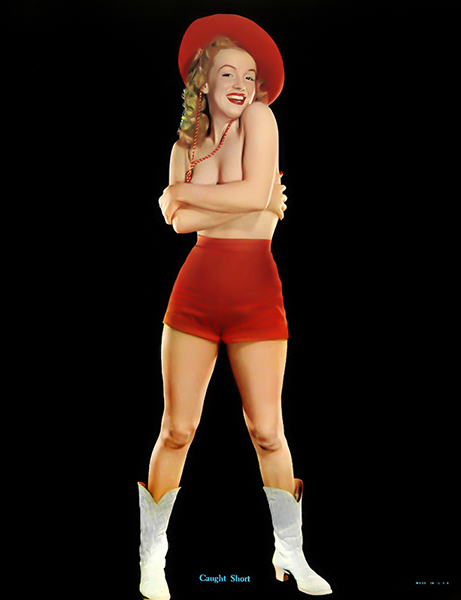 “I only did 35 words a minute and didn’t do them very well, so they gave me a job inspecting parachutes. One day some photographers came in and they said, ‘Where have you been hiding?'” — Marilyn Monroe

“I worked in one picture, ‘Scudda Hoo, Scudda Hay’ – a little tiny part, but they cut me out.” — Marilyn Monroe 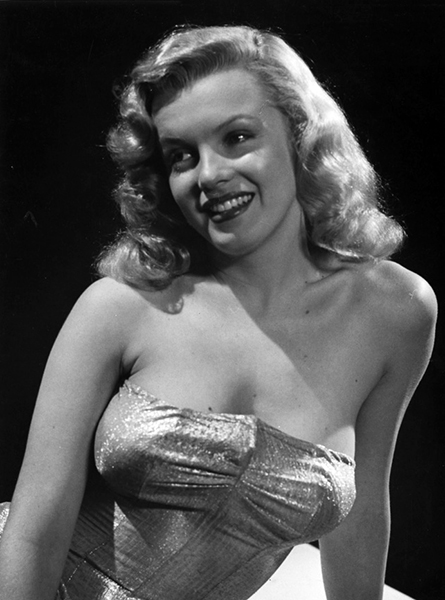 “But I’m not sure none of the girls ever got hurt by being called such names.” — Marilyn Monroe, when asked about her 1949 publicity name “The Mmmmm Girl.” 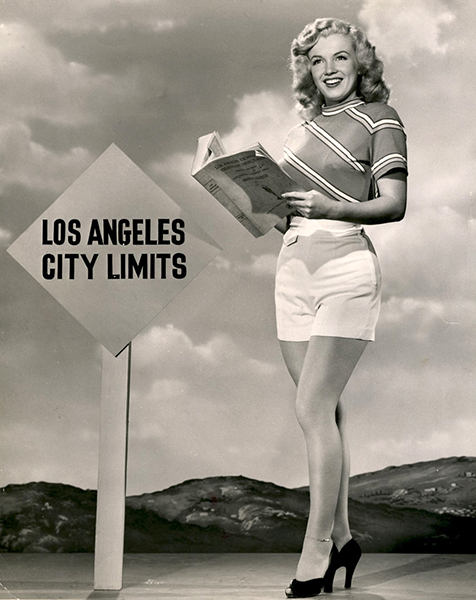 “Even though I was born there, I still can’t think of one good thing to say about it. If I close my eyes, and picture L.A., all I see is one big varicose vein.” — Marilyn Monroe 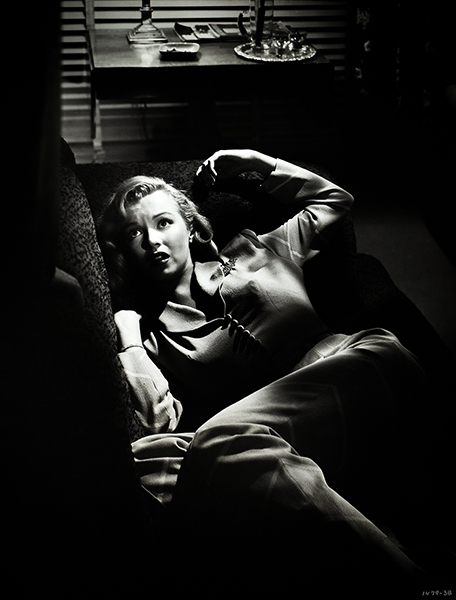 “You know that when a producer calls an actress into his office to discuss a script that isn’t all he has in mind. And a part in a picture, or any kind of stock contract is the most important thing in the world to the girl, more than eating. She can go hungry, and she might have to sleep in her car, but she doesn’t mind that a bit – if she can only get the part. I know, because I’ve done both, lots of times. And I’ve slept with producers. I’d be a liar if I said I didn’t…” — Marilyn Monroe 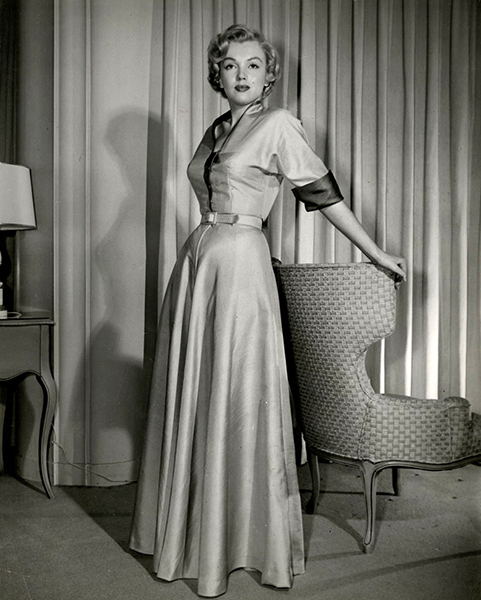 “I am naturally shy and I was so frightened when I first started to act that the words wouldn’t come out of my mouth. I was so impossible that after I finished school on the 20th lot I was fired.” — Marilyn Monroe 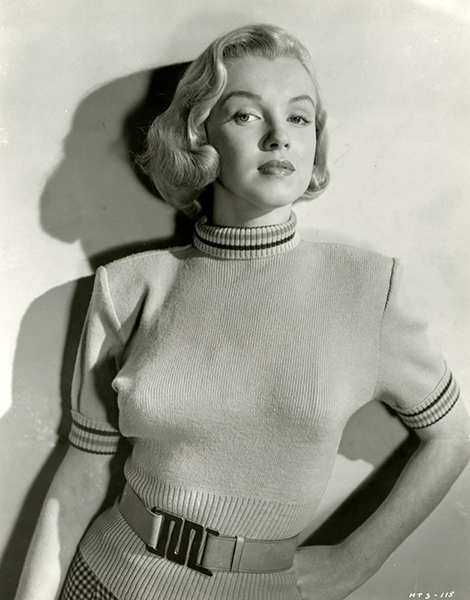 “People keep asking me if I don’t hate having the wolves pester me. I don’t. I like it. I like men. Lots better than women. And I like having them like me.” — Marilyn Monroe

“She could overcome her sense of inferiority only by feeling desired. When she was placed before a camera, she would try to seduce the lens. As pathetic as it was, her effort to excite and desire for her always made a wonderful picture.” — Philippe Halsman.

“I guess I’m the first man here to get to first base with her.” — Ralph Edwards (pictured), host of This is Your Life, announced to the crowd after Marilyn threw the first pitch.

Photo taken at the “Out of This World” charity baseball game in September 1952. 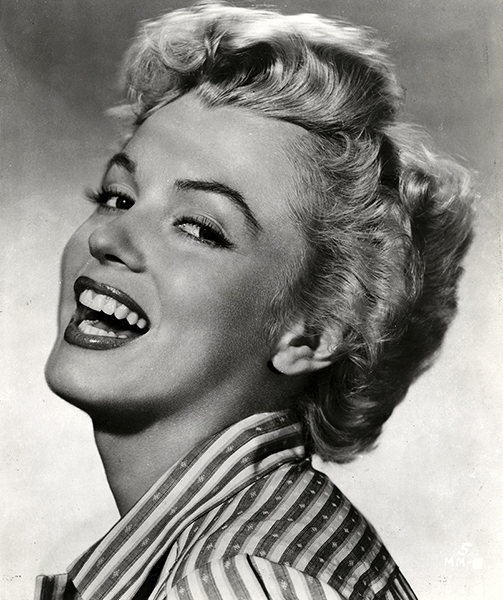 “Marilyn had it her way; she did what she wanted to do. Hollywood didn’t ruin her. She was brought up in Hollywood. Her mother worked at RKO as a cutter.” — Mamie Van Doren 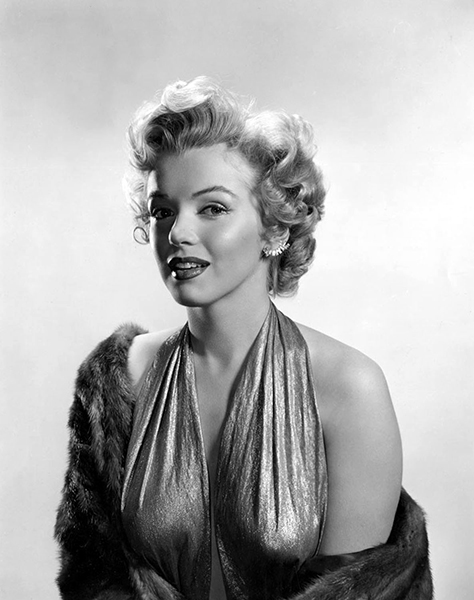 “People expect to find me one of two things. Either a tart or a dumb blonde. I’m neither.” — Marilyn Monroe 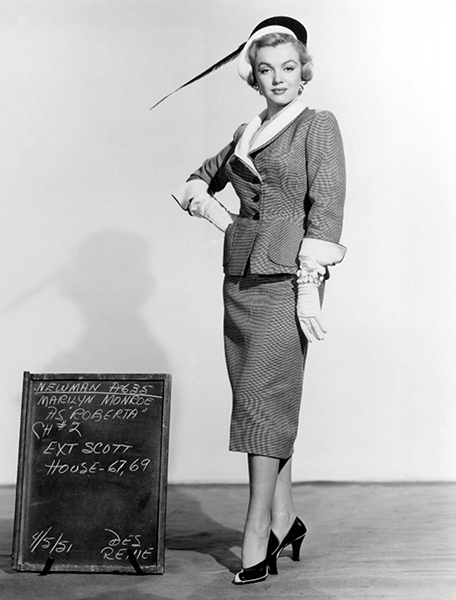 “In Hollywood a girl’s virtue is much less important than her hairdo. You’re judged by how you look, not by what you are. Hollywood’s a place where they’ll pay you a thousand dollars for a kiss, and fifty cents for your soul. I know, because I turned down the first offer often enough and held out for the fifty.” – Marilyn Monroe 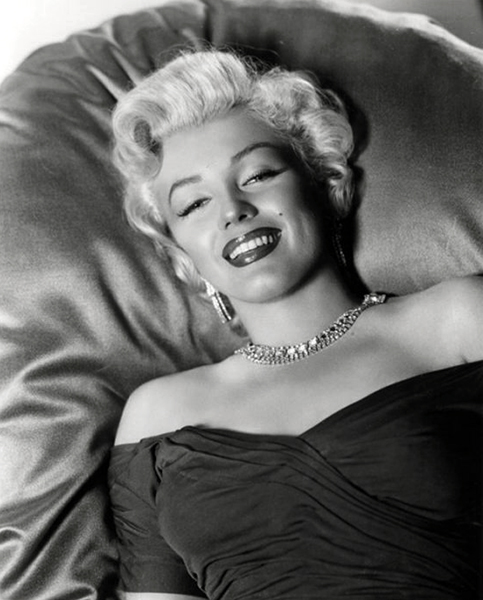 “I knew I belonged to the public and to the world, not because I was talented or even beautiful, but because I had never belonged to anything or anyone else.” — Marilyn Monroe

With Lauren Bacall and Betty Grable on a 20th Century Fox sound stage during the production of How to Marry a Millionaire (1953). Photographer: Frank Worth 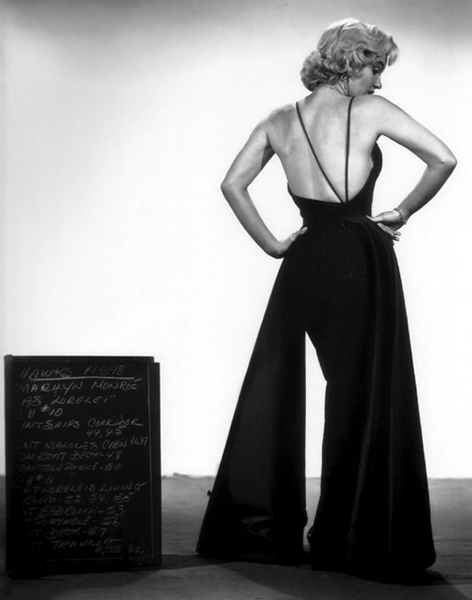 “Dreaming about being an actress is more exciting than being one.” ― Marilyn Monroe 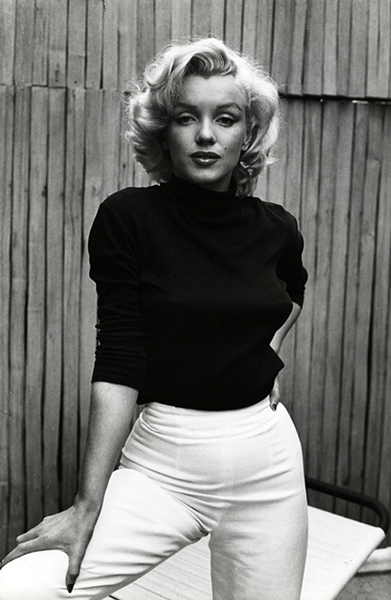 “Too much publicity makes you lonely. Suddenly you see people speaking to you and being nice to you. But they never did before, and you feel it’s happening only because you’re now a ‘personality.'” — Marilyn Monroe 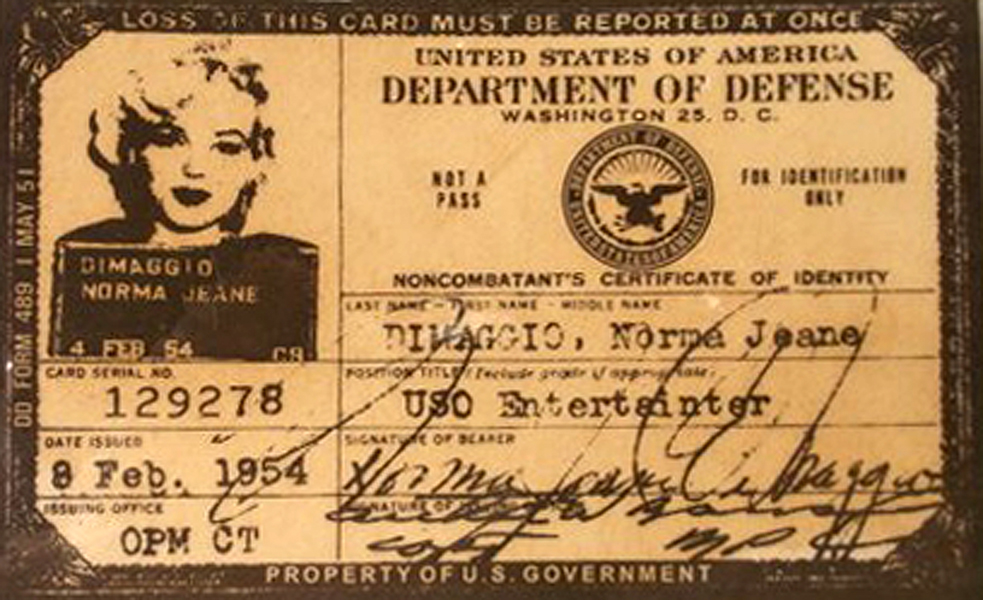 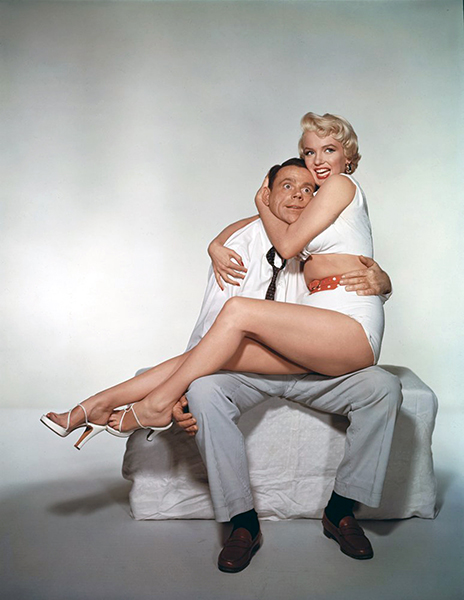 “I don’t know about my sex appeal. I know I like men. Maybe they like ME because I like THEM so much.” — Marilyn Monroe
Source: Maurice Zolotow (1955)
Photo: The Seven Year Itch (1955). With Tom Ewell. 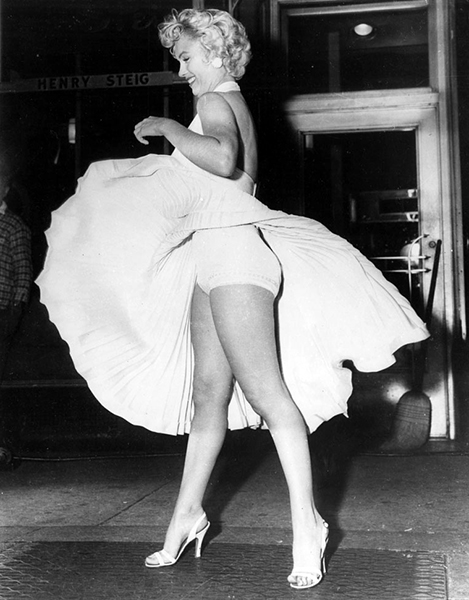 “I never felt better or looked better in my life.” — Marilyn Monroe
Source: 1955
Photo: The Seven Year Itch (1955)
Disclosure: The link below is an affiliate link, meaning, at no additional cost to you, we will earn a commission if you click through and make a purchase. We don’t make much — enough to buy a coffee here and there so that we can continue posting cool stuff at all hours of the day and night for your enjoyment.  We also only try to provide recommended products relevant to the post.

“I bumped into Marilyn Monroe at a party. While other people drank and danced, she sat by herself in a corner almost unnoticed, playing the piano.” — Marlon Brando

“Personally, I react to Marlon Brando. He’s a favorite of mine.” — Marilyn Monroe

“She was a very experienced film actress, but she could forget so many of the mechanical techniques. She would constantly miss her marks so she would be out of focus or out of the light or in a shadow. I think it was a lack of confidence. For somebody who the camera loved, she was still terrified of going before the camera and broke out in a rash all over her body.” — Don Murray 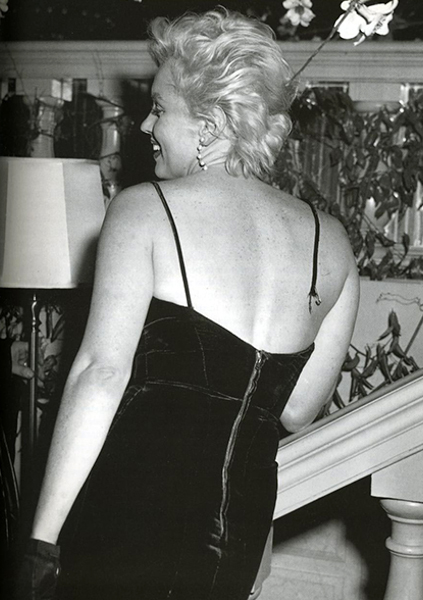 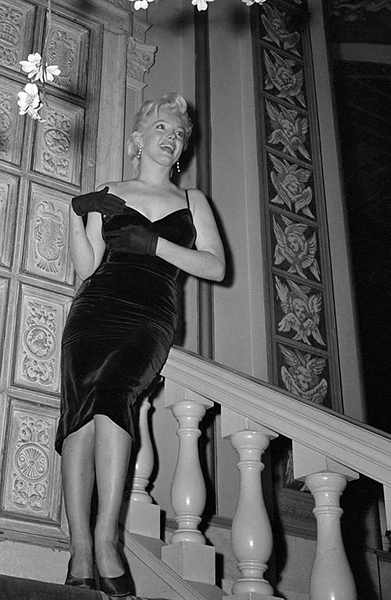 “I want to grow and mature as an actress. I want to be a good actress.” — Marilyn Monroe

“I feel a queer satisfaction in punishing the people who are wanting me now. But it’s not them I’m really punishing. It’s the long ago people who didn’t want Norma Jeane. It isn’t only punishment I feel. I get thrilled as if I were Norma Jeane going to a party and not Miss Monroe. The later I am, the happier Norma Jeane grows. People dislike me for such tardiness. They scold me and explain to me it’s because I want to seem important and make a spectacular entrance. That’s partly true, except it’s Norma that longs for importance— and not me.” — Marilyn Monroe

“I feel sexy. But not the way I have to play it on the screen. It’s just that I want to be a glamour girl and an actress combined. I am trying to find myself as a person. And sometimes that’s not easy to do. Millions of people live their entire lives without finding themselves. The best way for me to find myself is to prove I’m an actress.” — Marilyn Monroe

“She gave more to the still camera than any actress — any woman — I’ve ever photographed.” — Richard Avedon. In this photo, Monroe poses as Clara Bow.

“You know they ask you questions. Just an example: ‘What do you wear to bed? Do you wear a pajama top, the bottoms of the pajamas, or a nightgown?’ So I said, ‘Chanel No. 5!’ Because it’s the truth! And yet I don’t want to say ‘nude,’ you know? But it’s the truth.” — Marilyn Monroe

“The nicest thing for me is sleep, then at least I can dream.” — Marilyn Monroe 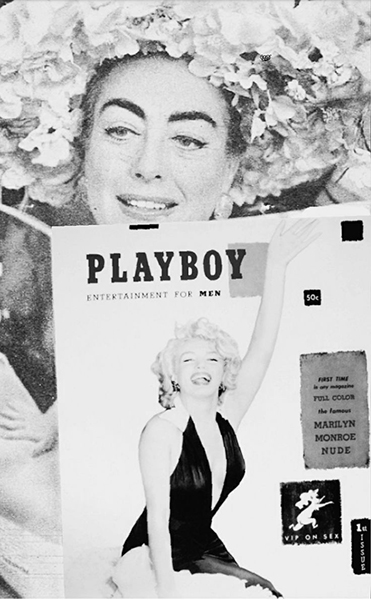 “Look, there’s nothing wrong with my tits, but I don’t go around throwing them in people’s faces!” — Joan Crawford on Marilyn Monroe

“You miss so much when you’re young. It’s fine to be old. So exciting. And I’m not going to retire.” — Marilyn Monroe

“If you see the movie carefully, you’ll see how vulnerable, how unhappy she was for various reasons.” — Eli Wallach

“She went right down into her personal experience for everything, reached down and pulled something out of herself that was unique and extraordinary. She had no techniques. It was all truth, it was only Marilyn. But it was Marilyn plus. She found things, found things about womankind in herself.” — Director John Huston 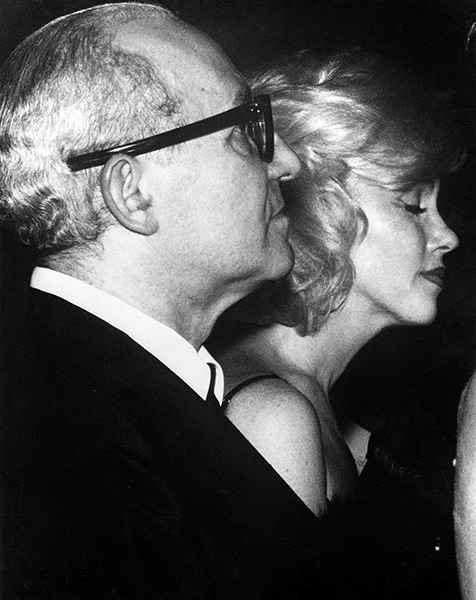 “The dream of her talent, which she had nurtured as a child, was not a mirage. When she first came to me I was amazed at the startling sensitivity which she possessed and which had remained fresh and undimmed, struggling to express itself despite the life to which she had been subjected. Others were as physically beautiful as she was, but there was obviously something more in her, something that people saw and recognized in her performances and with which they identified. She had a luminous quality – a combination of wistfulness, radiance, yearning – to set her apart and yet make everyone wish to be a part of it, to share in the childish naïveté which was so shy and yet so vibrant.” — Lee Strasberg 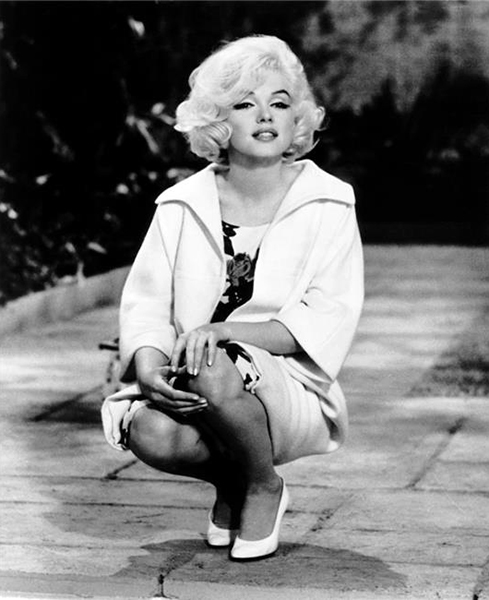 “I was proud to be part of this industry when Marilyn was fired [for Something’s Got to Give]. I don’t think she has a friend in this industry. And many people have tried to befriend her….I think Miss Monroe deserved what she got.” — Joan Crawford

Photo: Something’s Got to Give

“Marilyn Monroe‘s name, like those of her legendary predecessors, will have a place – as firm a place as any perhaps – in Hollywood history.” — London Daily Telegraph in 1962.

Photo: Bert Sixx (1962). It is from the last photo session before death.

An unimpressive waxwork that was retired from the Hollywood Wax Museum.