“I’ve always played sexy roles. My voice always has been low and what they call ‘fetching.’ I’ve always put my hands on my hips and rolled my eyes.” – Clara Bow

“I hate being called a flapper. For a long time, they made me play such punk parts, that I was afraid they would kill me with the public. But I thought it over and decided it would be best to play each part as well as I could instead of sulking over my bad luck.” – Clara Bow in 1926, just before the release of her hit film, It.

“I know I look like I am having a lot of fun to people. I know that’s how I come across and I suppose I am sometimes, but I live like each day is going to be the last. If you grew up the way I did, when you didn’t know what was going to happen tomorrow and I’m not trying to blame anybody but you took your happiness as you found it day by day.” – Clara Bow

“I used to slip down to the beach and hold my head under the water just long enough to decide to come up again…it seemed so ironical to feel like that, just when I was made a star.” – Clara Bow

“I don’t care how I look, so long as my action appears convincing.” — Clara Bow

“There are really two kinds, the ideal flapper, and what I call the flopper, because her act is usually a flop.” — Clara Bow “I’m just dying to play heavy dramatic roles, but I’ll never be able to. The world wants Clara Bow to make them laugh and be happy, so Clara has to do the best she can about it and some of the sincere letters I get make it all very much worth while.” — Clara Bow

“You see, I know we can only be king-pins for about six years in this profession. No, all that fan mail doesn’t turn my head. I know these people write the same letters to others. Of course, I am as nice and friendly with people as I can be. It would be silly to be upstage and make enemies. When my six years of glory are over, I shall need every friend. If I haven’t snubbed anybody, nobody will want to snub me…” – Clara Bow

“Clara is the total nonconformist. What she wants she gets, if she can. What she desires to do she does. She has a big heart, a remarkable brain, and the most utter contempt for the world in general. Time doesn’t exist for her, except that she thinks it will stop tomorrow. She has real courage, because she lives boldly. Who are we, after all, to say she is wrong?” — Adela St. Rogers

“I smile, but my eyes never smile.” – Clara Bow

“I think that wildly gay people are usually hiding from something in themselves. They dare not be quiet, for there is no peace nor serenity in their soul. The best life has taught them is to snatch at every moment of fun and excitement, because they feel that fate is going to hit them over the head with a club at the first opportunity.” — Clara Bow

“I feel that I can never throw off the unhappiness of my childhood.” — Clara Bow

“Six months ago, I didn’t like talking pictures–thought I’d never appear in them. I was afraid of something which seemed to be so different from the profession I learned. But now I know it was all because I had never worked before a microphone. Today, I am crazy about talking pictures and I hope I never have to go back to silent films.” – Clara Bow

“I was the wrong type to play engenues. I was too small for a leading woman and too kiddish for heavies. I had too much of what Elinor Glyn calls ‘it’ apparently, for the average second role of anything of that sort. I got turned down for more jobs. I guess, than any girl who ever tried to break into pictures.” — Clara Bow

“I believe I’m better at emotional parts because I’m really naturally sad. All this pep I put on isn’t the real me. I assume it as I would a cloak, and that is what it is to me – a cloak for my actual feelings. When I’m alone I cry more than is good for me. Nobody likes to have a weepy person with them, so when there are people around I’m gay.” – Clara Bow

HOLLYWOOD, July 25, 1929 (UP) – And gentlemen, the way to win one of those “it” girls is to trot out the caveman act. The authority for that method is Harry Richman, New York stage actor and night club owner, who really ought to know since he is about to be wedded to Clara Bow, the original “it” girl of the screen.

“I got tough with her,” he told the United Press in an exclusive interview today. “She was accustomed to being ‘yessed’ by everyone.

“Instead of saying ‘yes,’ I said what I pleased and I won the greatest little girl that ever lived.

“The first time I telephoned her I asked her if I could come over that night.

“She said I couldn’t, that she had been working hard in a picture and didn’t feel well.

“But I was over to her house in ten minutes and 15 minutes later I persuaded her to marry me.”

Richman, here to make one picture for United Artists, waved his hand by way of illustration and revealed thereon a beautiful gold slave bracelet.

“She gave it to me,” he said. “Would you like to read what she had engraved on it?”

And without warning for an answer, he read: “To Harry of my heart,” and it was signed “Clarita.”

Apparently, the cave man routine didn’t work so well in the end. Bow and Richman never married. According to a few biographies, she was never faithful, often entertaining other “suitors” including a young Gary Cooper during her “engagement” to Richman.

Richman shot a documentary newsreel in 1929 and in 1930, made his starring movie, Puttin’ on the Ritz. No one seemed particularly impressed with his skills as a screen actor, but he would remain popular the rest of his life as a vaudeville and nightclub performer.

“In my era, we had individuality. We did as we pleased. We stayed up late. We dressed the way we wanted. I’d whiz down Sunset Boulevard in my open Kissel (flaming red, of course) with seven red chow dogs to match my hair. Today they’re sensible and end up with better health-but we had more fun.” — Clara Bow

“I was thinking, and I have learned that pictures take away more than they give. You spend all your youth and all your energy to attain the thing you thought you wanted more than anything in the world, and when you get it, you find you don’t want it. It not only doesn’t bring you happiness, but you find it has robbed you of all the other things that might have given you happiness.” — Clara Bow

“I’d like to find happiness. I certainly haven’t found it in pictures.” — Clara Bow

“I’m sick of the whole thing. Of course, there’s nothing wrong with Hollywood. I’m just fed up, that’s all. I want to do as I please for awhile and quit taking orders.” — Clara Bow

“They said they would give me a good break in the talkies. Yeah! They sure did. What they did to me has almost been enough to break my reputation as an actress right in two.” — Clara Bow

“Reporters would come to me. I’d always receive them. I’d tell them the truth. But they never printed it. They never even quoted what I had said, but made up something different. Everyone tried to picture me as tough. They tried to make me seem to talk out of the side of my mouth. What could I do?” — Clara Bow 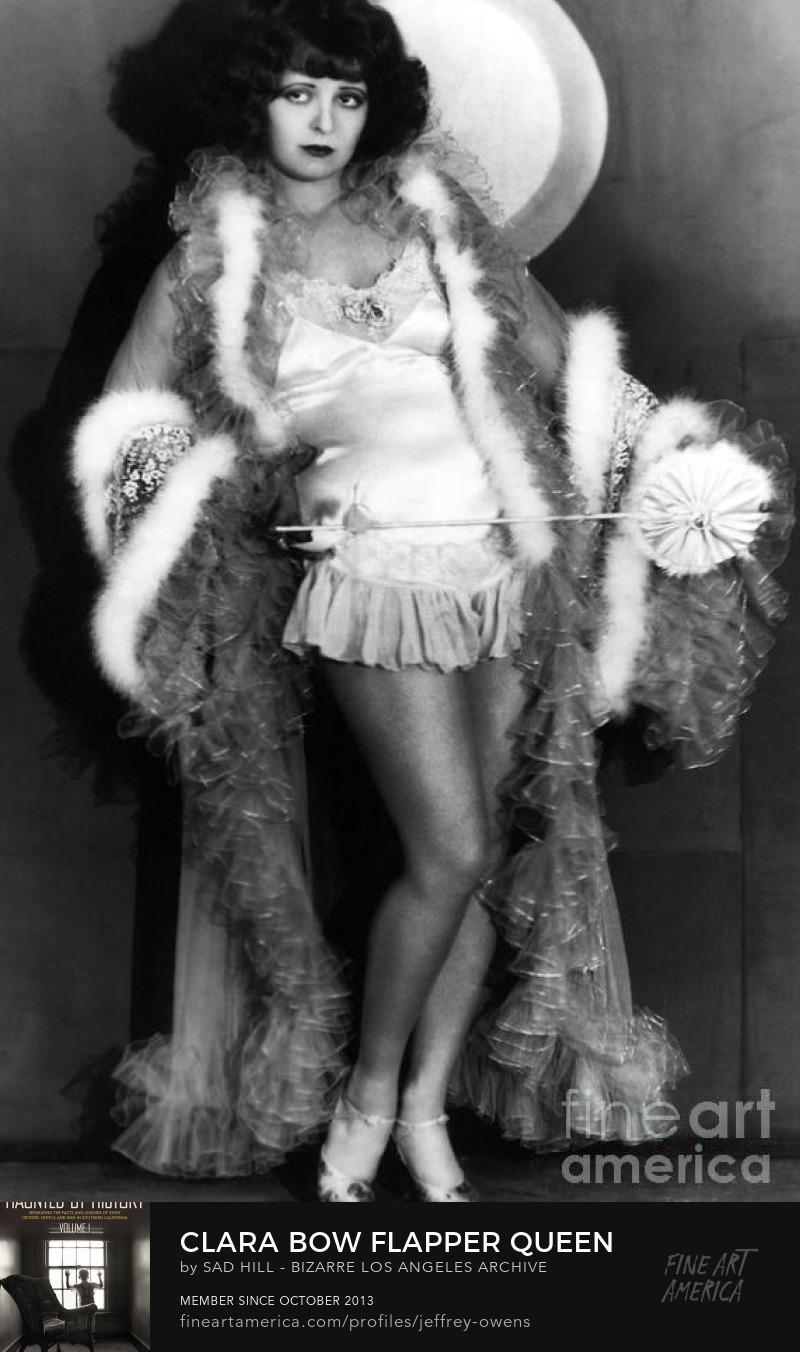 “I liked Clara. A very warm, sweet, generous girl. What great potential! But she wasn’t a finisher. Her mind was like a sponge, but she didn’t have the concentration or ability to see it through. She was quite ingenuous. People would go into shock over her salty language.” — Colleen Moore

“Fame is a funny thing. I cannot reckon with it. It is supposed to make people very, very happy – otherwise why do they strive so hard for it? It is supposed to mean money, and the power of doing what you want to do, and being admired and having things your own way. I used to think that, too. But it hasn’t worked out that way. Not since the day they told me I had won the contest and Clara Bow became Clara Bow have I known what it means to do what I wanted to do with any peace of mind.” – Clara Bow in 1931.

“Even now I can’t trust life. It did too many awful things to me as a kid.” – Clara Bow

“I don’t mind a little of that wild stuff if the story gives me a chance to do real emotional acting, but no more harlots!” — Clara Bow

Directions: Place 40 marshmallows and 2 cups whole milk in a double boiler or a bowl placed over a saucepan of simmering water. Once the marshmallows have melted, stir in 2 Tbsp. vanilla, then let cool. When the mixture starts to stiffen (about 30 minutes), combine with 1 pint heavy cream that has been whipped to stiff peaks. Pour the mixture into a plastic container (or trays) with a lid, and place in the freezer until frozen, about 2 hours. Serve in bowls like ice cream. This recipe serves 8 but can be halved.

Note: This was created for Bow. She did not create it herself.

Photographer: John Dennis, who took the photo inside Bow’s It Cafe in 1938.