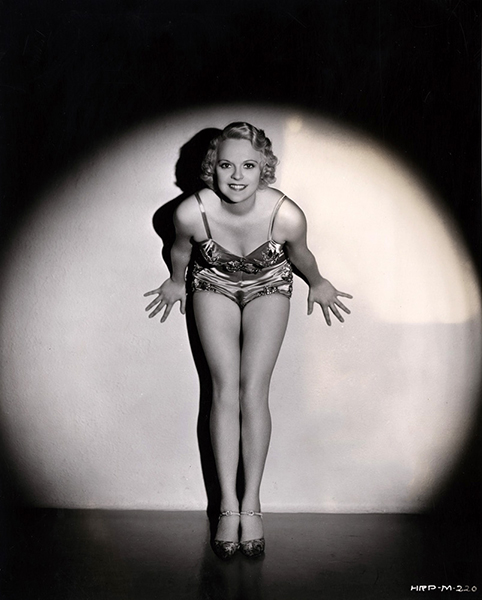 Lillian Miles, famous for her manic piano playing in Reefer Madness (1936), came to Hollywood in 1931 to try her luck in films.

Her background isn’t terribly exciting. She was born Lillian Bradley in Oskaloosa, Iowa, in 1907. As a young performer, she toured with musical theater stock companies in Des Moine, New York City, St. Louis, and Minneapolis.

At the age of 24, Miles got her break as a torch singer for KHJ A.M. radio. At that time, she performed at the Hollywood Roosevelt’s Blossom Room in late 1931. Columbia Pictures quickly signed Miles to a contract and awarded her the female lead role in Man Against Woman (1932), starring Jack Holt.

Columbia then selected her for the WAMPAS baby stars of 1932. However, the studio quickly dropped Miles from her contract in 1932, and chose Toshia Mori as its official WAMPAS selection.

Miles’ name briefly remained on the 1932 WAMPAS list as an independent (meaning that she was free-lance). However, the WAMPAS organization soon dropped her from that list after Miles failed to show up at one of its events. She had married instead.

Lillian Miles’ career never took off. She co-starred with Patsy Kelly and Billy Gilbert in a few Hal Roach comedy shorts in 1933-34, and she also sang “The Continental,” in the Astaire-Rogers film, The Gay Divorcee (1934). However, she spent most of her Hollywood years, working for poverty row studios until she gave up her career around 1939.

Here is a very revealing blurb about Miles, written by Dave Thomas in 1931, just at the beginning of her film career:

“Lillian makes no bones about her ambition. She wants to get in the movies and her desire is prompted solely by the opportunity they afford to earn big money. Artistic temperament doesn’t enter into things. The majority go arty – give ‘emotional outlet’ as their reason for wanting to be in pictures. Just which attack is best is rather hard to say. The movie moguls might like Lillian’s honesty. Then, too, she has ability…

“But then there’s that toe-stubbing business to be taken into consideration. The near-blonde singer is a little too anxious for a film contract. Her friends include only those who might be able to give her a helping hand.

“There’s an old story in Hollywood: ‘You had better be nice to that office boy because he might be general manager tomorrow.’ Never was such a statement truer than right now. Hollywood’s moguls all are sitting on tottering thrones. Others are waiting to take their places any day. And Lillian is apt to find that her attentions have been centered on the wrong persons.

“Watching her future will be like witnessing an interesting experiment. Her fan mail already exceeds that of a good many film players. Apparently, she has all the requisites for film success – except a knowledge of what makes the wheels go around. Few persons have succeeded without it.”