“The beauty of a woman must be seen from in her eyes, because that is the doorway to her heart, the place where love resides.” – Audrey Hepburn

“I have an opinion of myself which doesn’t change. Everything happens around and outside that. These other things are exciting, wonderful and pleasant to hear. But I don’t think for one minute I’m the greatest since Garbo.” – Audrey Hepburn in 1954, after winning critical praise for her role in the 1954 Broadway play, Ondine.

“I’m an introvert… I love being by myself, love being outdoors, love taking a long walk with my dogs and looking at the trees, flowers, the sky.” ― Audrey Hepburn 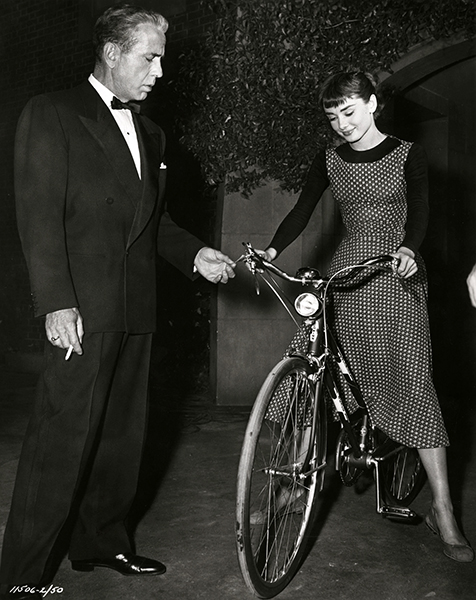 Not everyone enjoyed working with Audrey Hepburn. One of them was Humphrey Bogart, who starred with her in Sabrina (1954).  When asked to comment on her, Bogart dismissively replied that she was “OK if you like doing 36 takes.”

However, Bogart eventually softened by saying, “You take the Monroes and the Terry Moores, and you know just what you’re going to get every time. With Audrey it’s kind of unpredictable. She’s like a good tennis player—she varies her shots.”

Audrey Hepburn and Grace Kelly wait backstage at the Pantages Theater during the 1956 Academy Awards.

Audrey Hepburn poses as Pearl White in The Perils of Pauline.