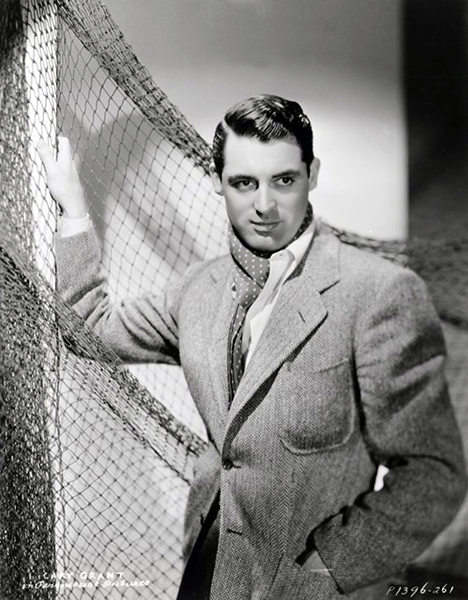 “I had only one contract in Hollywood. That was at Paramount, where I stayed five years. Adolph Zukor wanted me to stay and offered me $2,500 a week. I said I would sign if I could decide what pictures I would do. He said if he gave that right to all his stars, he might never make a picture all year. So I free-lanced, the first star to do so I believe. It worked out well for me.” – Cary Grant 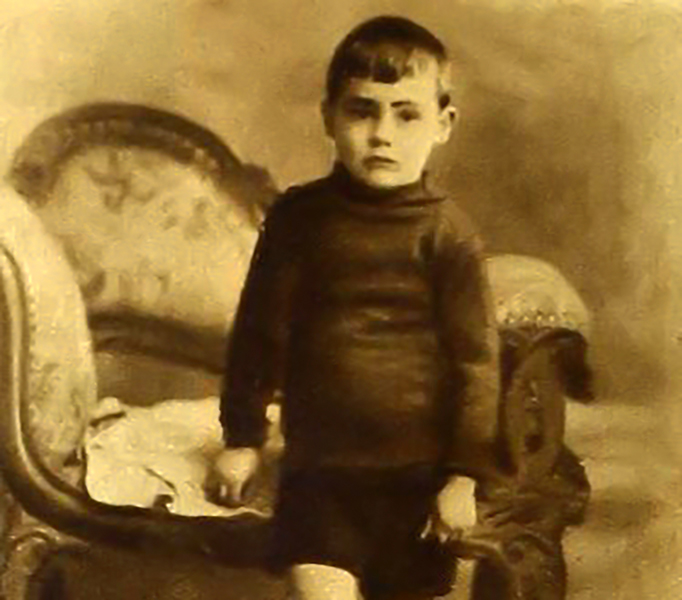 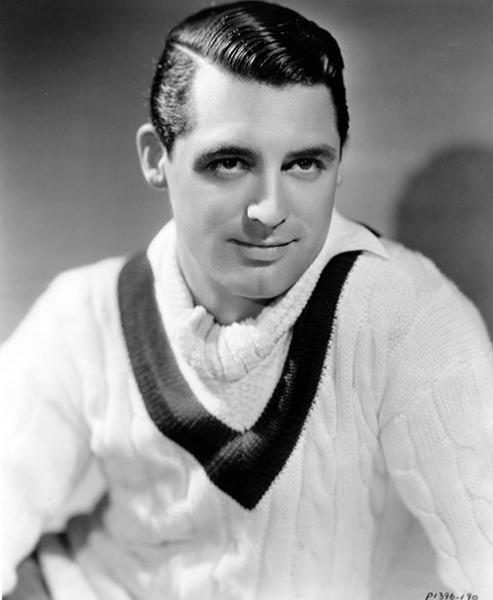 “Whenever I see myself on the screen, I always think how good all the rest of the actors are, and how bad I am. I seem to see the word ‘Ham’ written all over me.” – Cary Grant 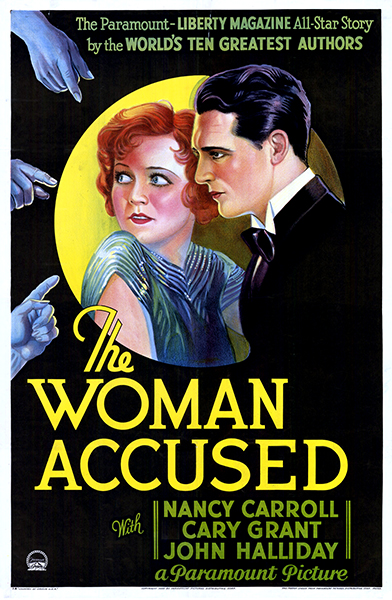 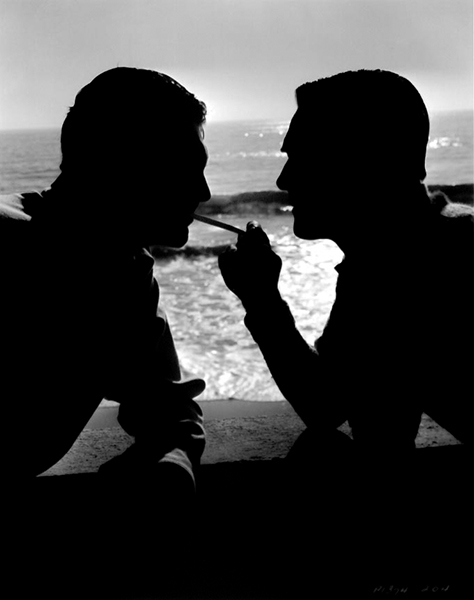 “Oh, Cary won’t talk about it. At most, he’ll say they did some wonderful pictures together. But Randolph will admit it—to a friend.” — George Cukor 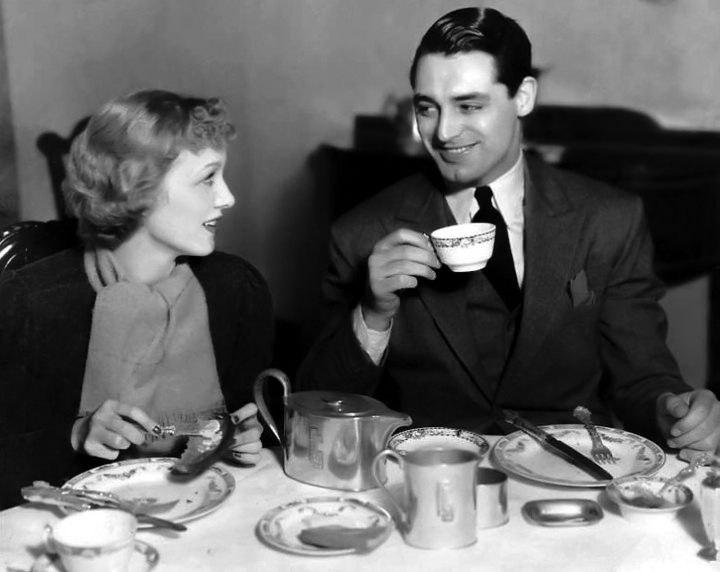 “Cary was married to his career.” — Virginia Cherrill

A honeymoon breakfast for both of them in 1934. 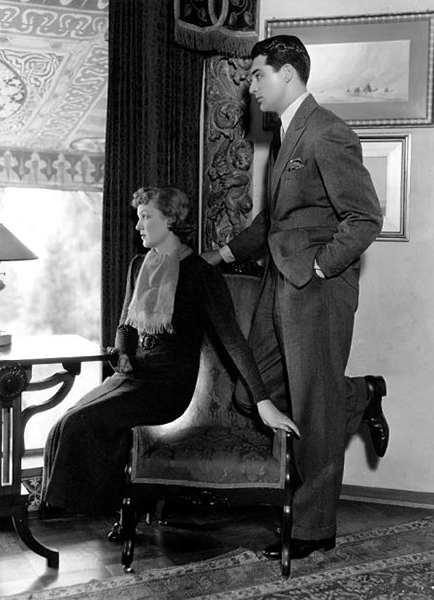 HOLLYWOOD, Cal. – What will become known in future as the Cary Grant hoax seems to have come off without any particular harm, save unpleasant publicity to the dark and handsome star, who was reported to have taken poison over a fight with Virginia Cherrill, his wife.

Close scrutiny of the facts reveals the Grant tragedy to be primarily a huge binge with Mr. Grant playing the identical role he has just finished in a picture. In the story, Grant, the young sweetheart, quarrels with his fiancee and phones her that he is about to take poison. The girl rushes to him and all is forgiven.

When the Cary Grants separated a few days ago, the husband seemed to be of the opinion that his wife would return to him in a few days. His wife voiced a contrary idea. When reconciliation seemed not so easy as Grant had expected, he resorted to a bottle of whiskey, it is reported, and then sought the telephone.

HIS VARIED and somewhat hysterical calls gave the girl at the apartment house telephone some misgivings. His threat to end it all gave Virginia Cherrill, who was at her mother’s house, considerable worry. She rang back the apartment and told the telephone girl to check on Cary.

The phone girl did, with a call to the receiving hospital. Came the men in white and the stomach pump. All stories must have their sordid moments and this is the dark spot in the Cary Grant hoax. An hour later Cary Grant, considerably shaken but much more himself, was ready to be taken home.

The doctor insisted that Cary Grant had played the scene well in every respect but one. He had forgotten to take the poison about which he had been so dramatic.

“Perhaps I forgot the poison,” said Grant, “but I certainly didn’t forget the whisky, and I am ashamed of myself. Only a comedian should get drunk. It doesn’t help a straight actor out any.”

PROPPED UP IN BED with blue polka dot pajamas sat Cary Grant in the final scene of the comedy. Into the room came his lovely blond wife but not into his waiting arms. She stood rather diffidently at the foot of the bed and smiled wanly:

“Hello. Can I do anything?”

“Well-you know where to find me,” was her retort, and she was on her way.

Both Cary Grant and Virginia Cherrill have admitted that there is no other man or woman. Their friends have shamelessly admitted that money differences keep them apart. Grant‘s idea of spending his salary and Virginia‘s don’t exactly tally, say their intimates. Virginia Cherrill, before her marriage, was beaued about by a young American millionaire with steam yachts ‘n’ everything. A Hollywood apartment may seem flat after all that. 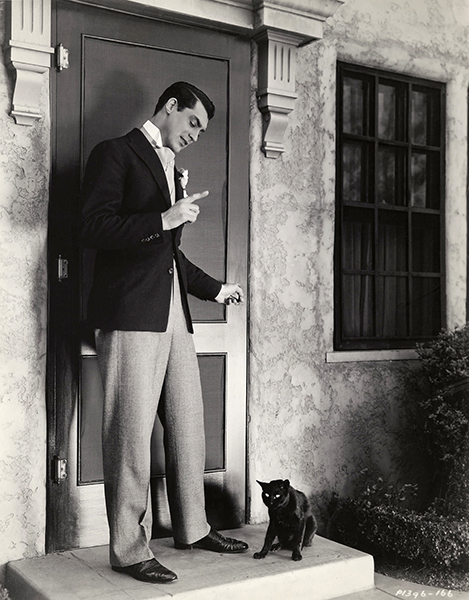 Here he is, standing outside his Paramount Studios dressing room, trying to convince a black cat not to cross his path in this gag publicity still from 1934. 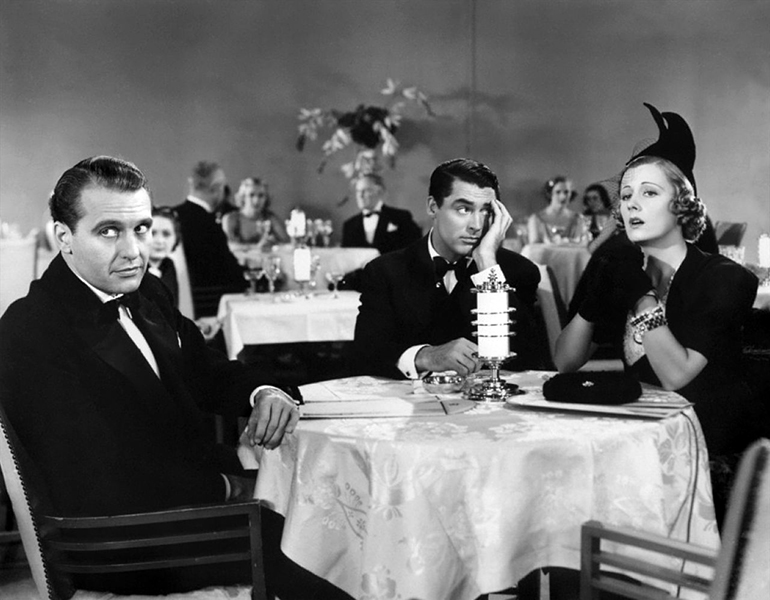 Although the script for The Awful Truth (1937) had been rewritten numerous times, the best draft was discarded the day before principal photography began. The studio rushed the film into production anyway due to Irene Dunne‘s contractual commitment. Director Leo McCarey and its three main stars, Dunne, Cary Grant and Ralph Bellamy,  relied largely on improvisation, making the behind the scenes antics almost as screwball as the ones onscreen. Thanks to all the talent involved, the film became a hit and was nominated for six Academy Awards, including Best Picture, Best Director and, believe it or not, Best Screenplay. McCarey took home the only Oscar. 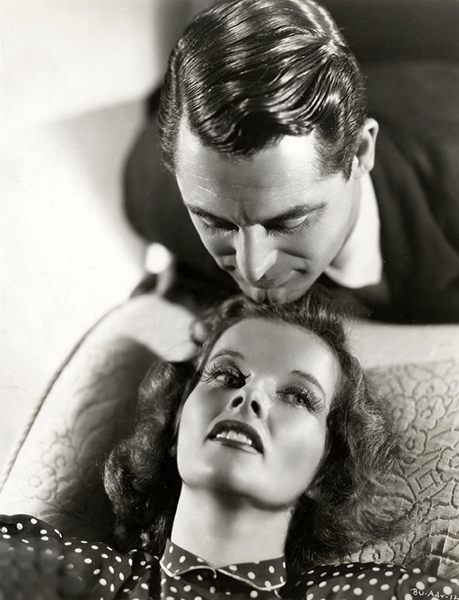 “Cary was a witty man and would think of a lot of funny things to do. We had great fun….Everyone says he’s handsome. I never thought Cary was particularly good looking.” — Katharine Hepburn 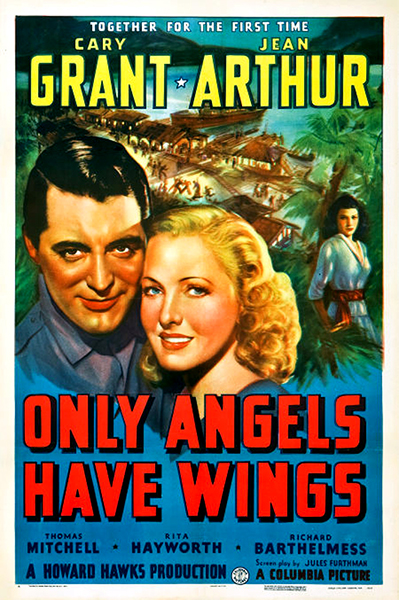 Only Angels Have Wings (1939). With Jean Arthur and Rita Hayworth. 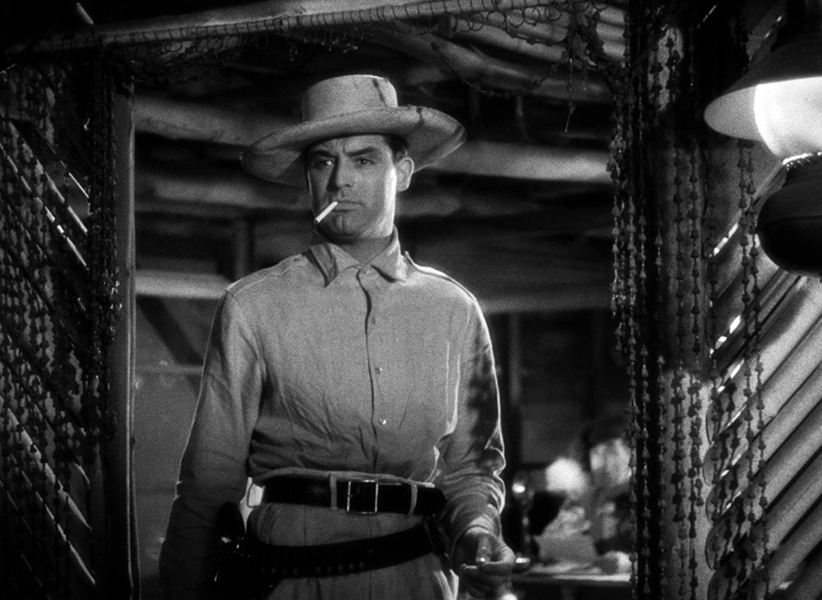 “I have no desire ever to make a Western. I’ll leave them to the great, big outdoor guys. I’m strictly an ‘inside’ actor, myself!” — Cary Grant 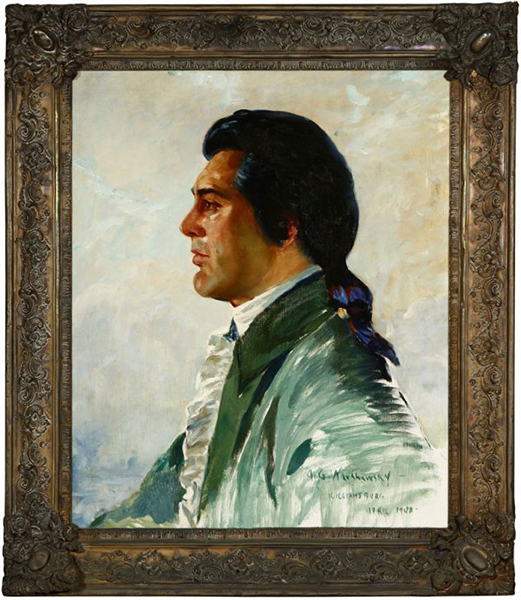 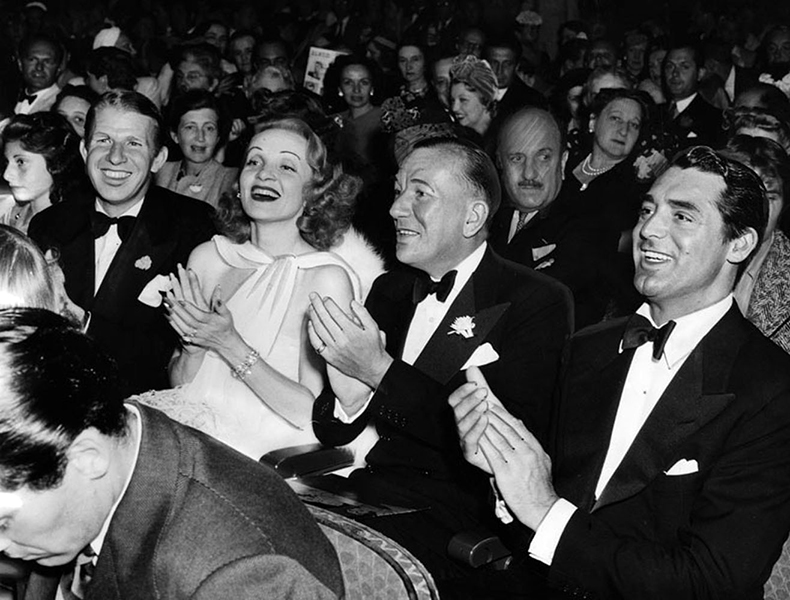 Marlene Dietrich, Noel Coward and Cary Grant attending an evening of live playlets at the El Capitan Theatre (6838 Hollywood Boulevard) in 1940. The special event, entitled “Tonight at 8:30” was a fundraiser for the British Red Cross. (LAPL 00057121) 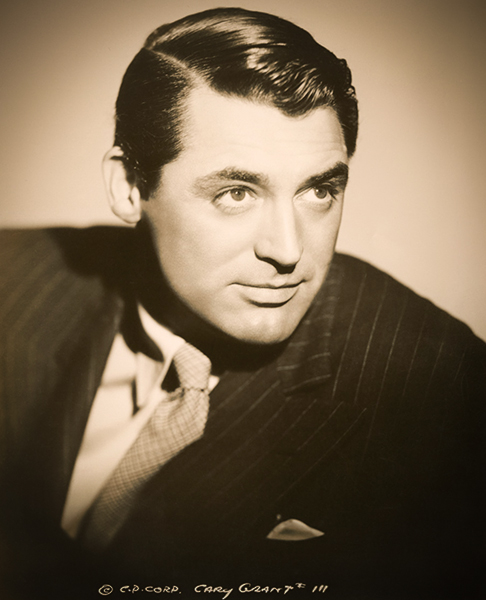 “It seems to me if the interest in a star as a person was genuine, and not in what he represented, there would be no such thing as a faded and forgotten star. The actor hasn’t changed as a person; only his status and what he symbolizes is different.” — Cary Grant 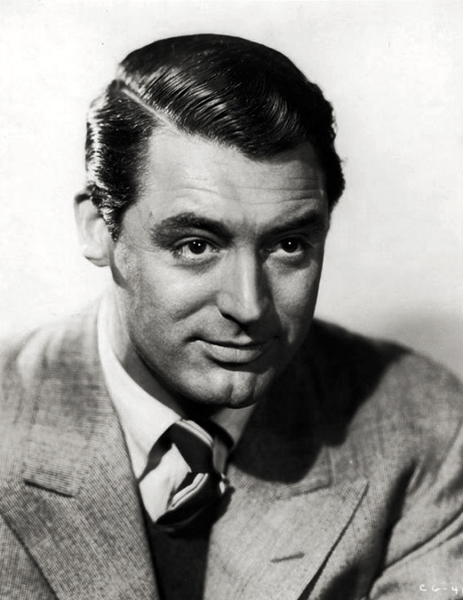 “I have spent the greater part of my life fluctuating between Archie Leach and Cary Grant, unsure of each, suspecting each.” — Cary Grant 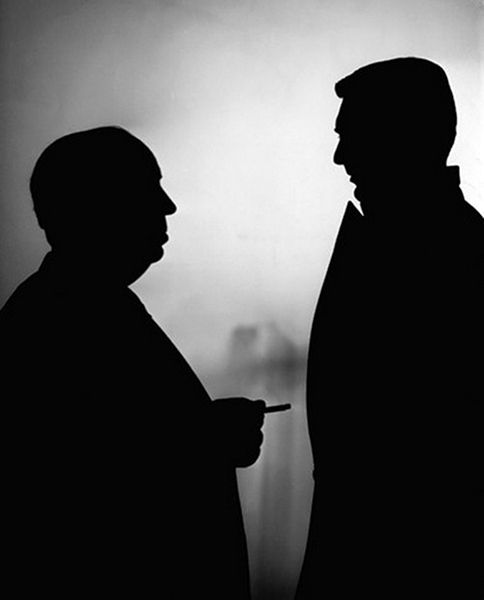 “Cary Grant is the only actor I ever loved in my whole life.” — Alfred Hitchcock

“To get one of those, you’ve got to black your teeth and play drunk scenes. I play me in films – so Oscars are out.” — Cary Grant

“Always allow the woman to come to you in the love scene. Don’t make the move on her. It puts you in a very commanding position.” — Cary Grant 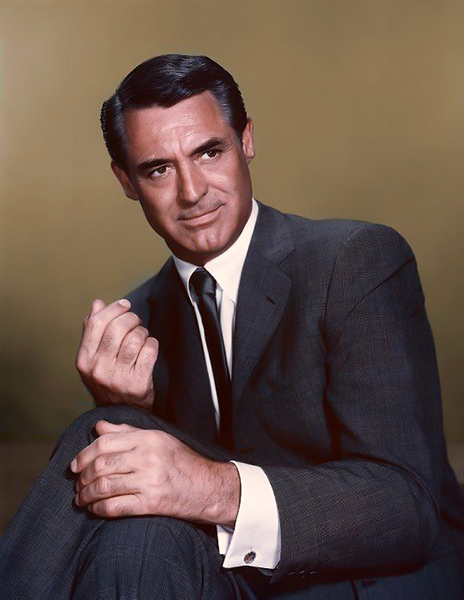 “Quite honestly, we’re better than the others. All those method actors are so busy rolling their eyes and pulling faces they have no opportunities to build up their personalities – as we did. Even Brando admits that. He started off full of gimmicks – splendid for the parts he had to play. But there came a day when he had to put on a suit and stand still. That was the day he realized what Cooper and Gable and the rest of us were up against.” — Cary Grant 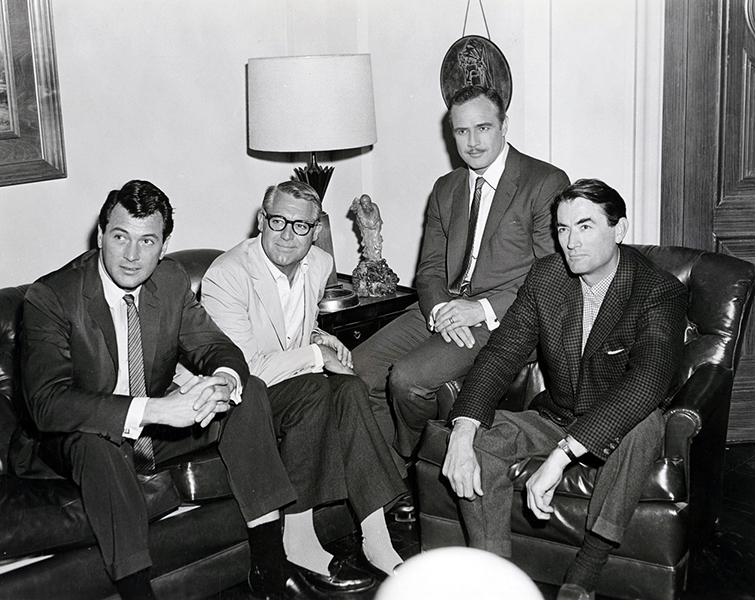 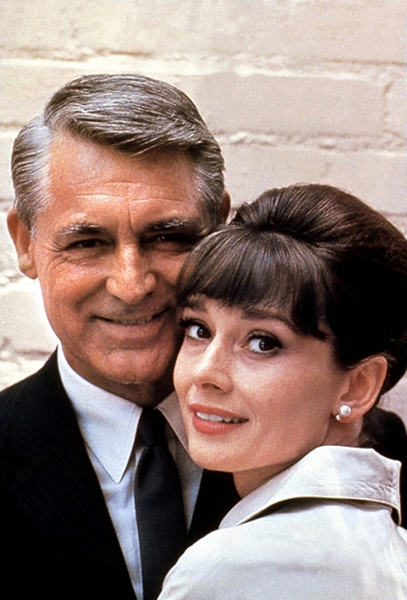 “He is quite remarkable, you know. I think [Audrey Hepburn] is now too old for him, and in his next picture he will be making love to someone like Jane Fonda.” — Ingrid Bergman 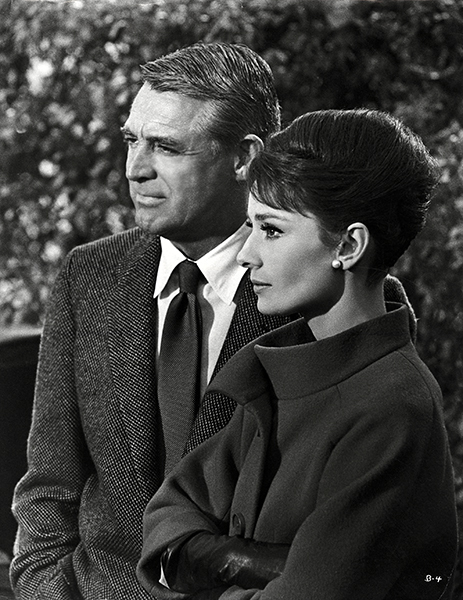 “I think he knew me better that I did myself….I had this great affection for him because I knew he understood me. It was an unspoken friendship, which was wonderful. He would open up his arms wide when he saw you, and hug you, and smile, and let you know how he felt about you. We lived at other ends of the world, but it was always the same.” — Audrey Hepburn

Source: Evenings with Cary Grant: Recollections in His Own Words and by Those Who Knew Him Best by Nancy Nelson (1991) 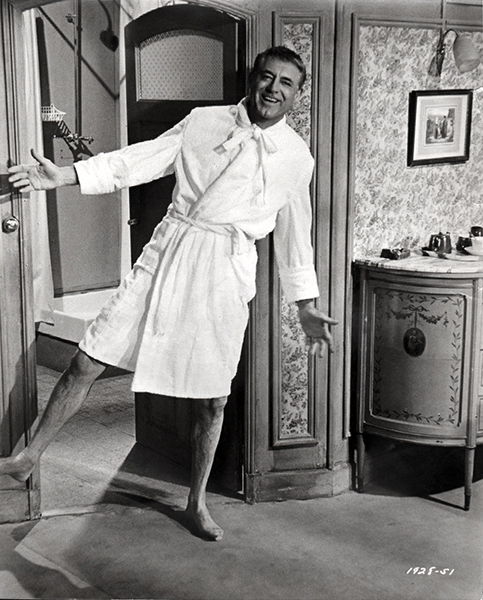 “I’m so sick and tired of being questioned about why I look young for my age and why I keep trim. Why do some idiots make so much of it – and why don’t they go out and try to emulate it? Every one wants to keep fit, but what do they do? – they poison themselves with the wrong foods; contaminate their lungs with smoking; clog their pores with makeup; poison their bodies with alcohol.” — Cary Grant 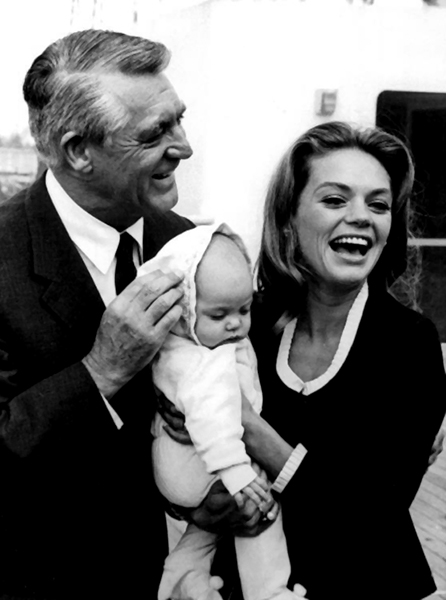 “I was a nice-looking girl, but there were girls who were drop-dead gorgeous! What was it about me that he was attracted to? Because when he got it, he tried to change it. I think it was that he wanted someone to trust. Really trust. And he told me, more than once, that I was the only woman he ever knew who he could trust enough to have a child. And he was right. He could trust me. That’s why the marriage was such a shattering experience. But if you’re not going to deal with the demons, nothing else matters.” — Dyann Cannon 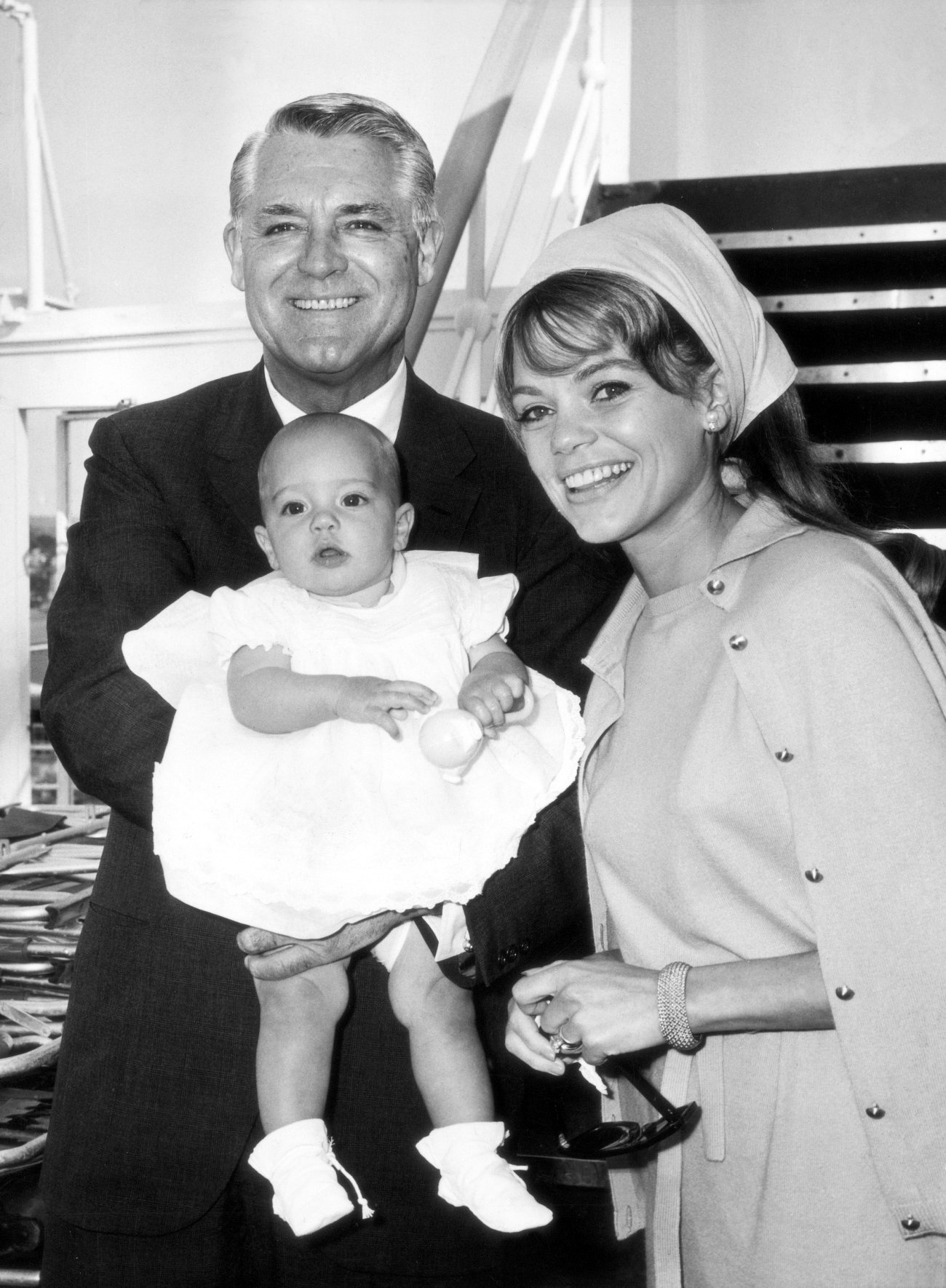 “For him, LSD was the gateway to God – it would save him and the marriage. But drugs can’t do that.” — Dyann Cannon 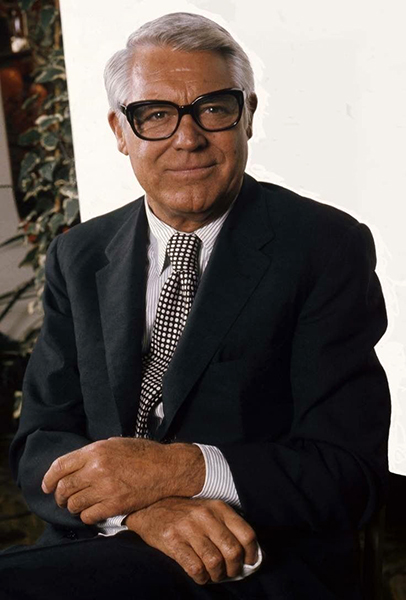 “I’m ancient. I’m sure I’m a disappointment to everybody. I find that when I meet people they say, ‘Oh, you still look great.’ That word ‘still’ means something, connotes something.” — Cary Grant

“And…Whew! They all repeat the rumor that I’m a tightwad and that I’m homosexual. Now I don’t feel that either of those is an insult, but it’s all nonsense.” — Cary Grant