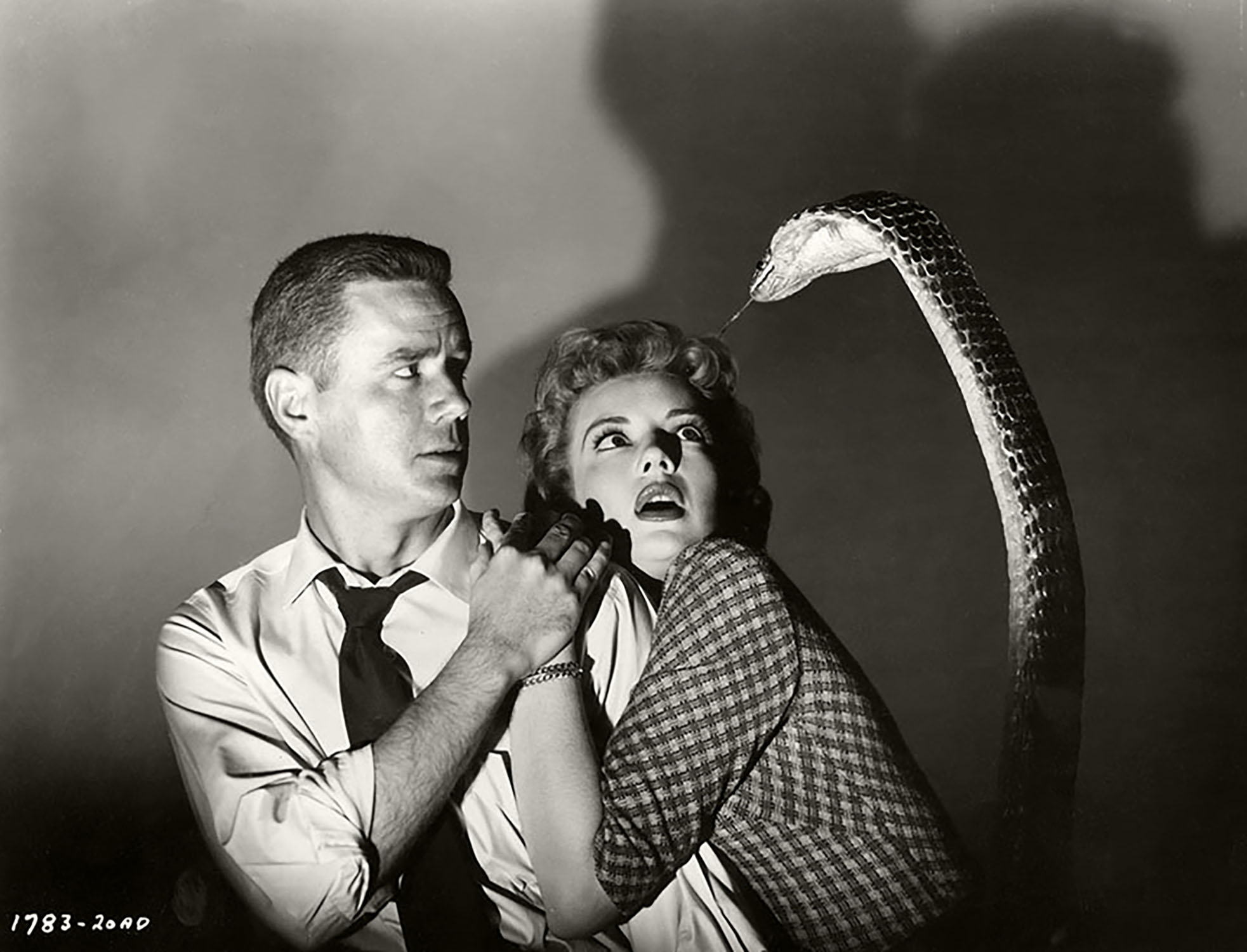 Here’s a collection of campy horror films from the 1950s. 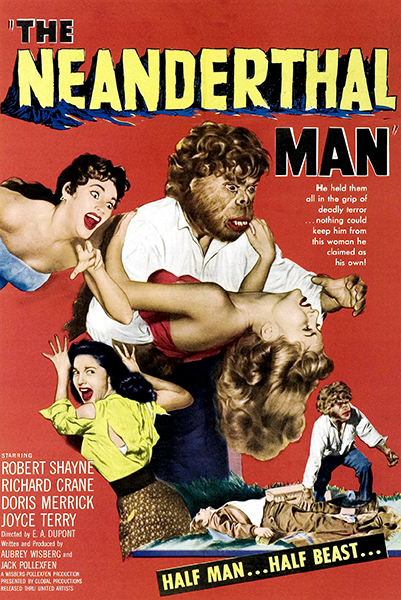 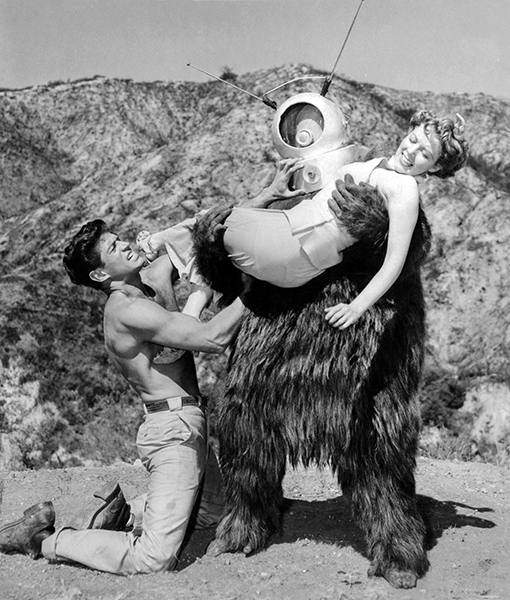 “Humans, listen to me. Due to an error in calculation, there are still a few of you left.” — Ro-Man from Robot Monster (1953) 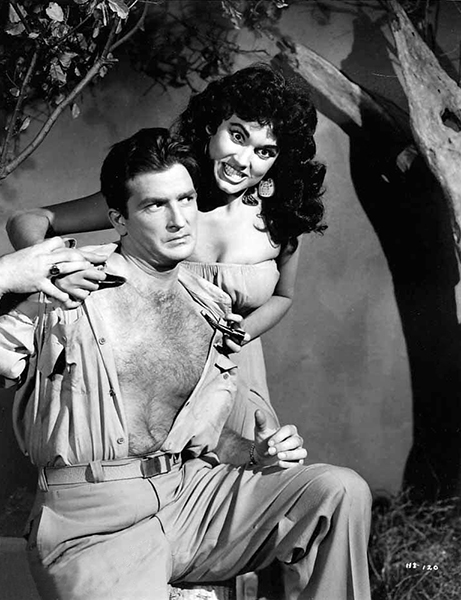 “If we are successful, I shall have a super female spider with a thinking and reasoning brain. A creature that may someday control the world.” — line from Mesa of Lost Women (1953). With Robert Knapp and Tandra Quinn. 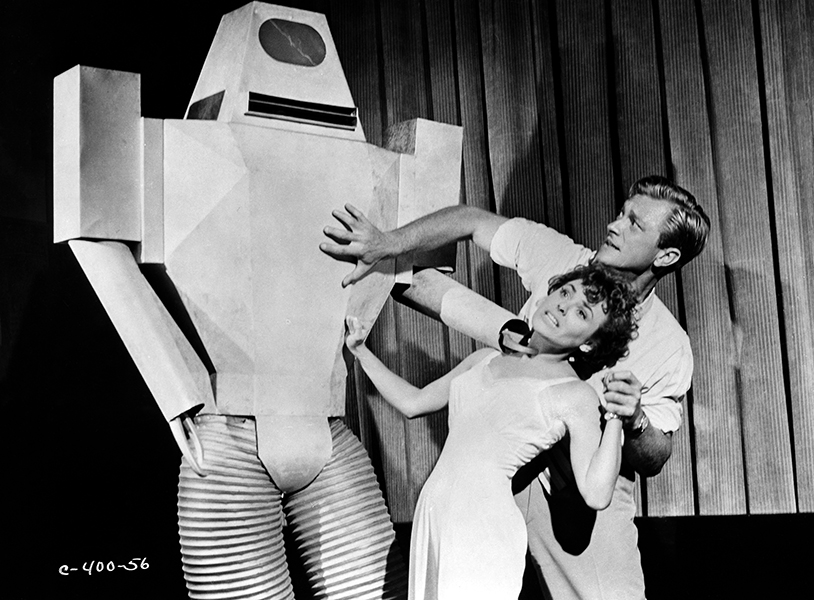 “It’s horrible! They must have weapons we’ve never even dreamed of!” — Target Earth (1954). With Richard Denny and Kathleen Crowley. 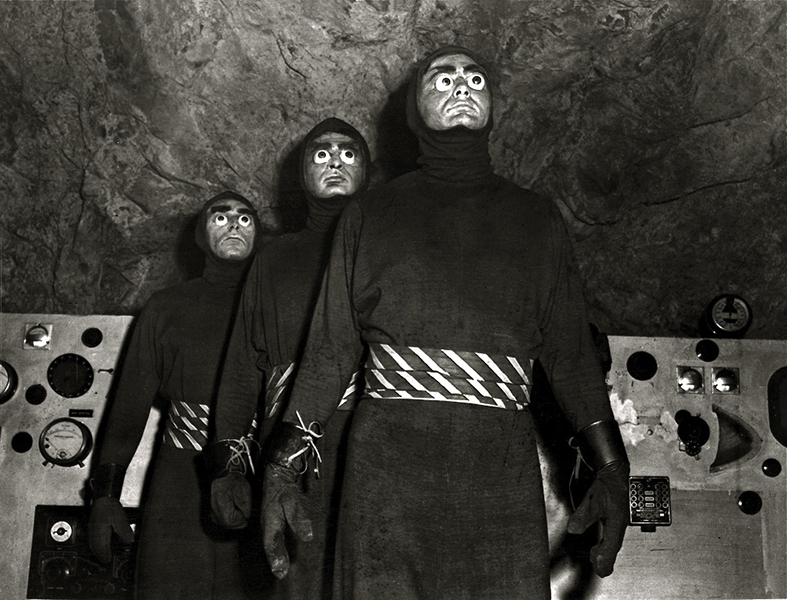 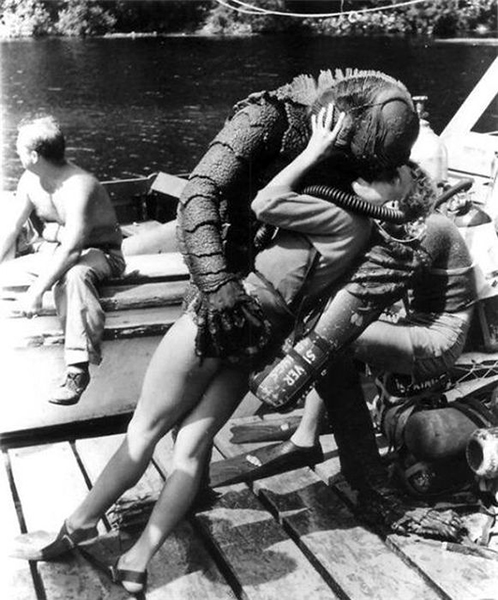 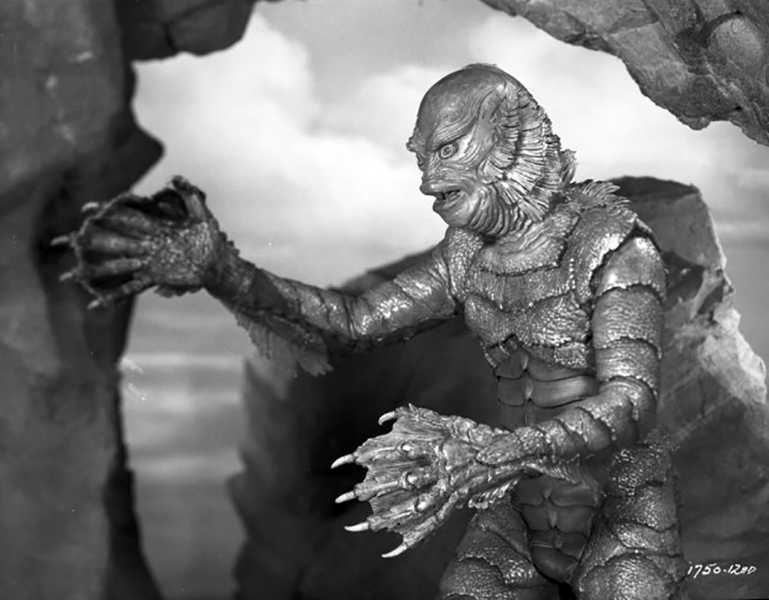 Notice the Gill-Man’s eyes? They were a fixed permanent part of the suit in the original film, which made Ben Chapman’s peripheral vision almost non-existent. 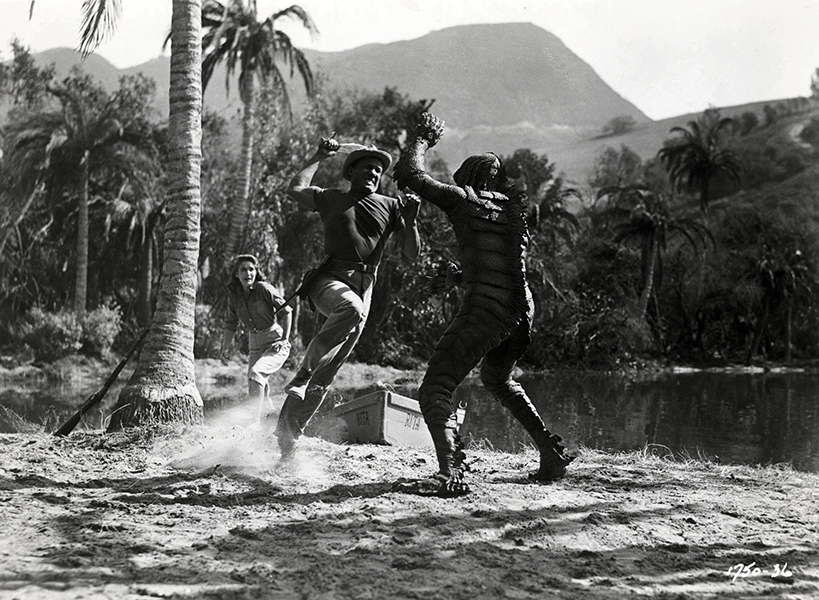 “We didn’t come here to fight with monsters. We’re not equipped for it. We came here to find fossils.” — Creature from the Black Lagoon (1954) 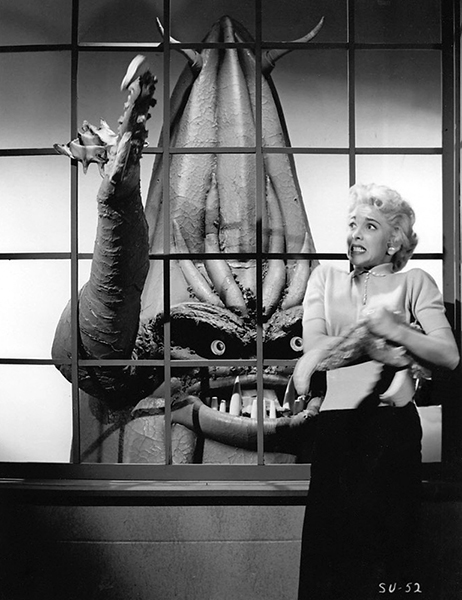 “You think you’re gonna make a slave of the world… I’ll see you in Hell first!” — movie quote from It Conquered the World (1956). With Beverly Garland. 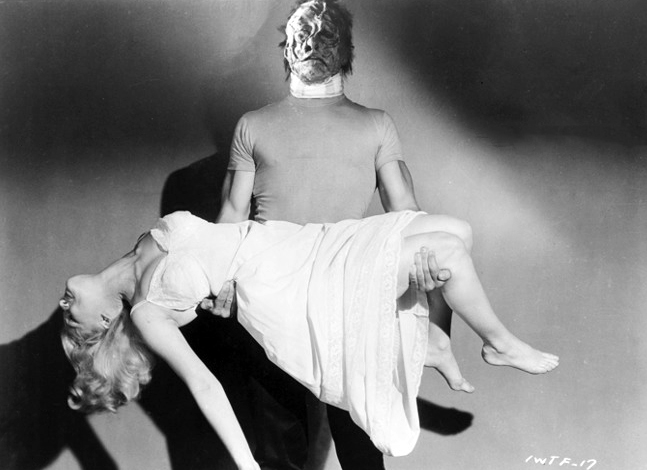 “Speak. I know you have a civil tongue in your head because I sewed it back myself.” — Line from I Was a Teenage Frankenstein (1957). With Gary Conway and Phyllis Coates. 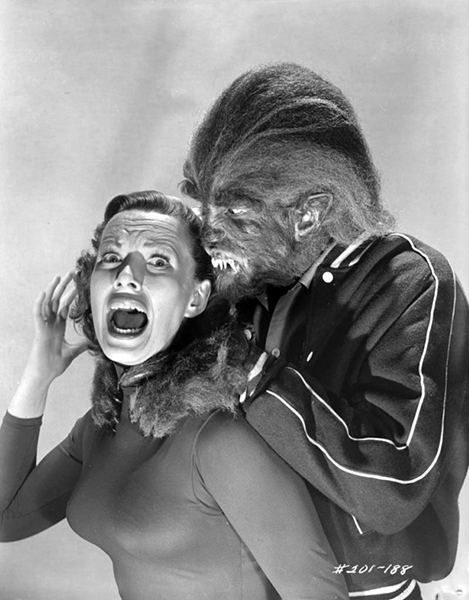 “I’m going to transform him, and unleash the savage instincts that lie hidden within.” — Line from I Was a Teenage Werewolf (1957). With Michael Landon. 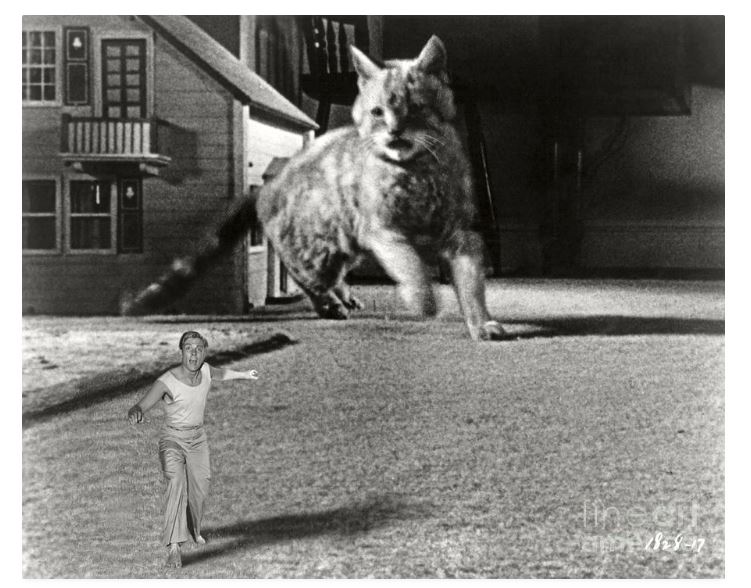 Grant Williams runs for his life from a cat in the science fiction classic THE INCREDIBLE SHRINKING MAN (1957). 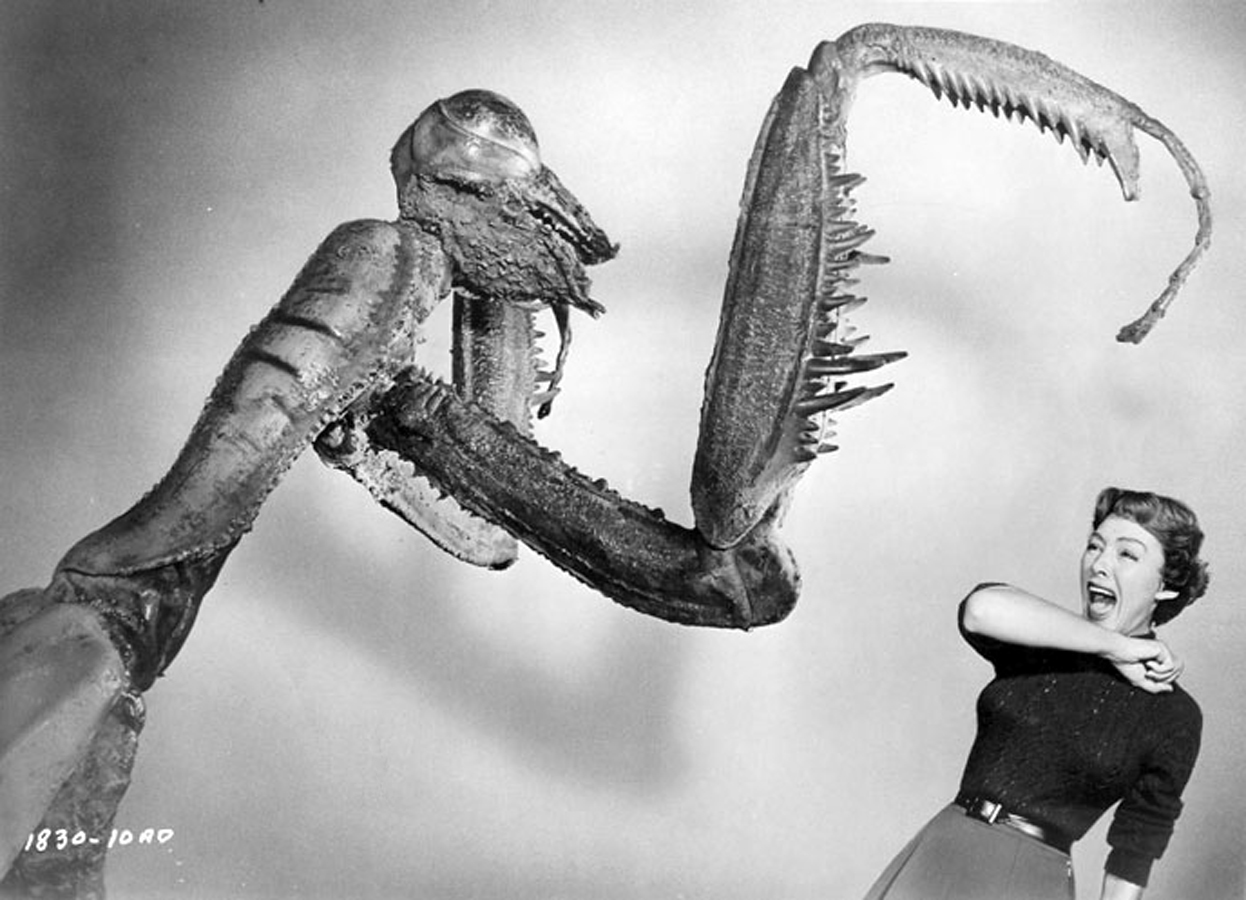 “In all the kingdom of the living, there is no more deadly or voracious creature than the Preying Mantis.” – The Deadly Mantis (1957) 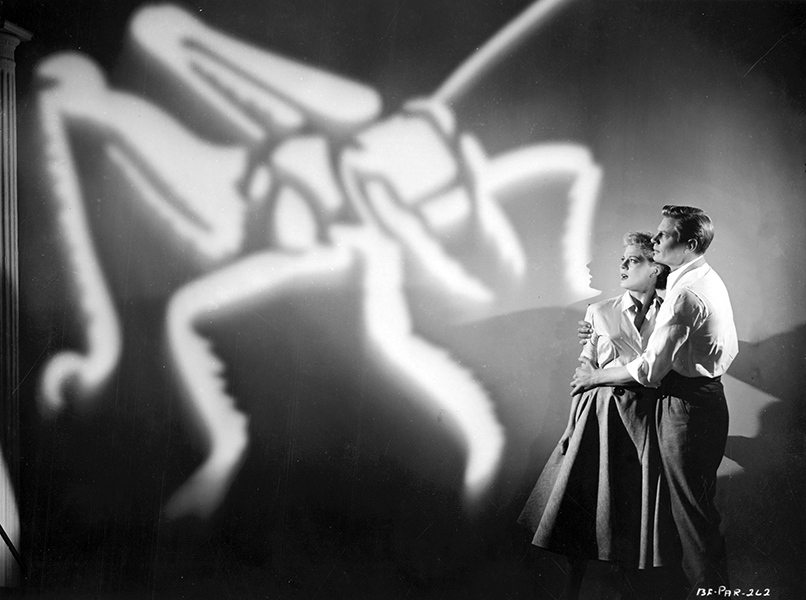 “Where do I get off asking the Regular Army for help with a bunch of oversize grasshoppers?” — line from Beginning of the End, starring Peggie Castle and Peter Graves 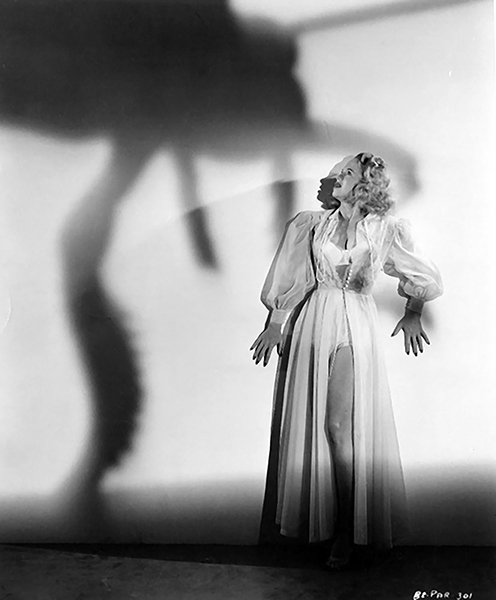 Peggie Castle is menaced by the shadow of an oversized grasshopper in The Beginning of the End (1957). 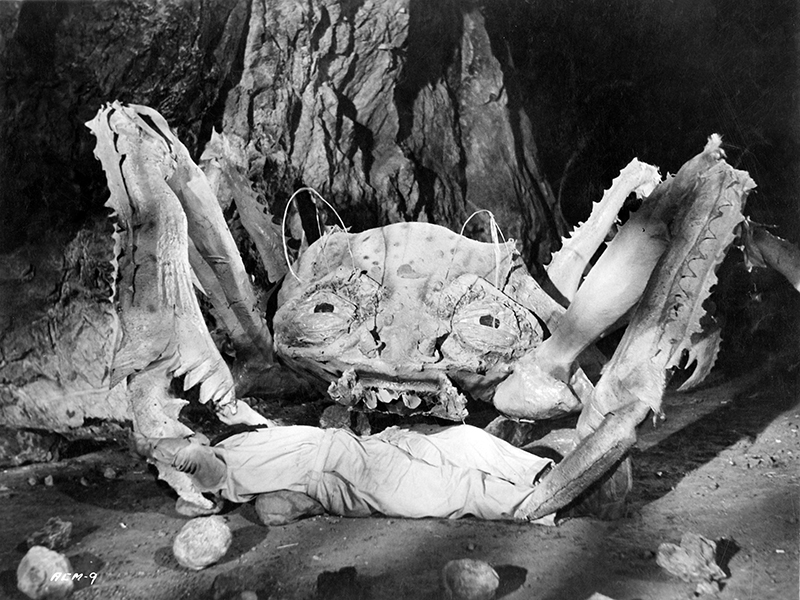 “And the Lord said, I will destroy man whom I have created from the face of the earth; both man, and beast, and the creeping thing, and the fowls of the air; for it repenteth me that I have made them.” — Attack of the Crab Monsters (1957) 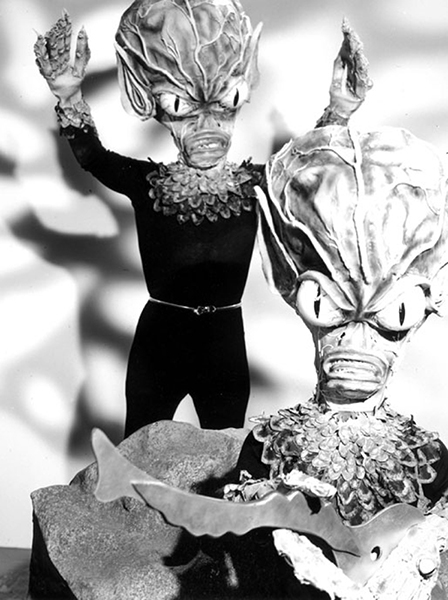 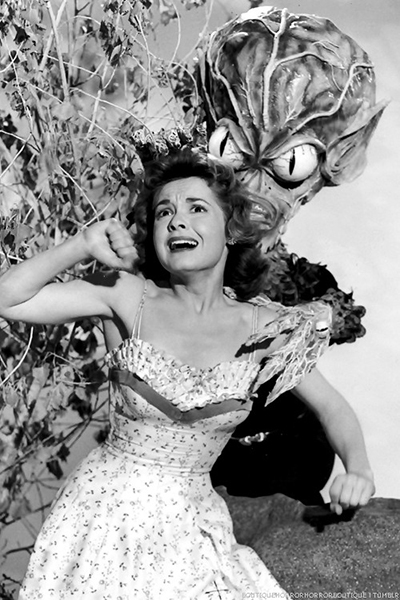 “Our job is to prevent a possible nationwide panic by keeping the information from the public.” — Invasion of the Saucer Men (1957) 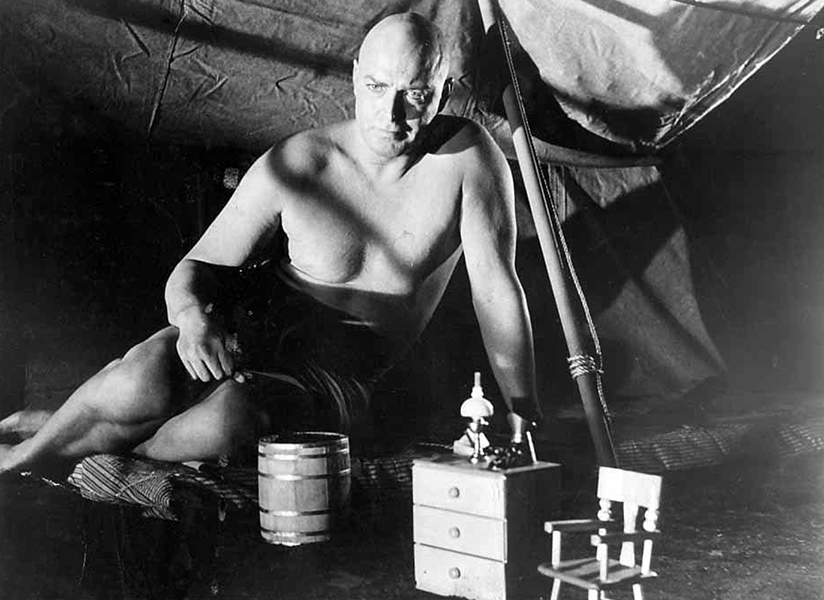 “Perhaps it isn’t I who’s growing, but it’s everyone who’s shrinking!” – The Amazing Colossal Man (1957) 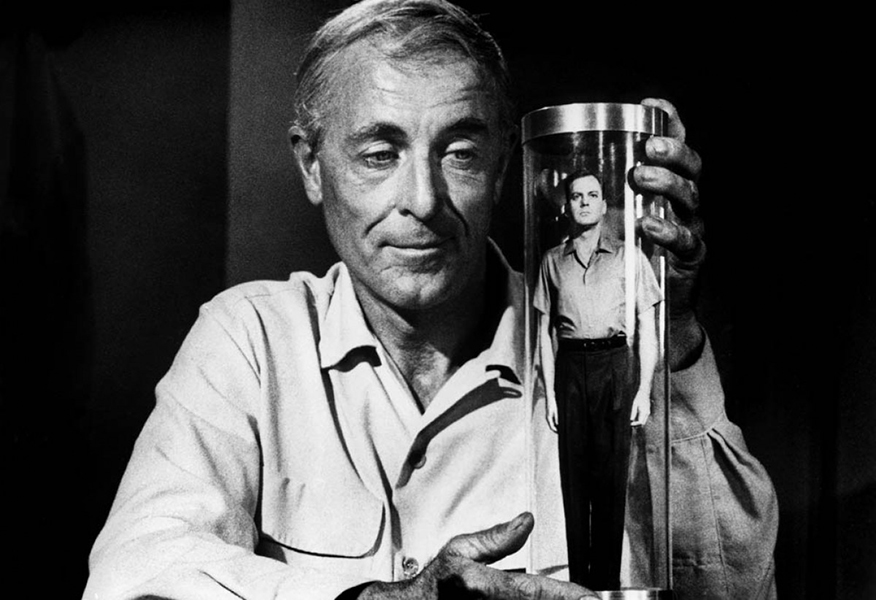 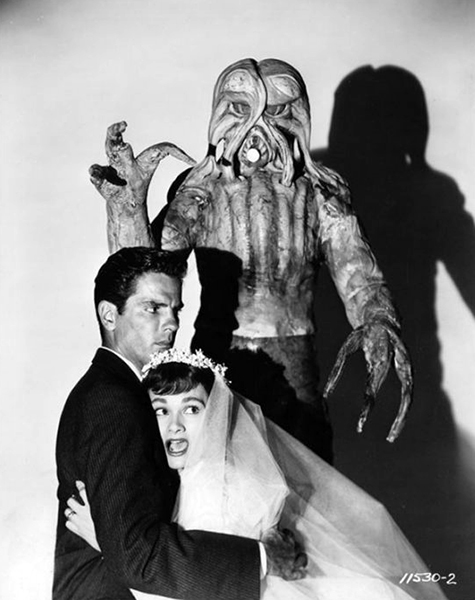 “Don’t you worry Marge. I know where to get our men. Human men!” — line from I Married a Monster from Outer Space (1958) 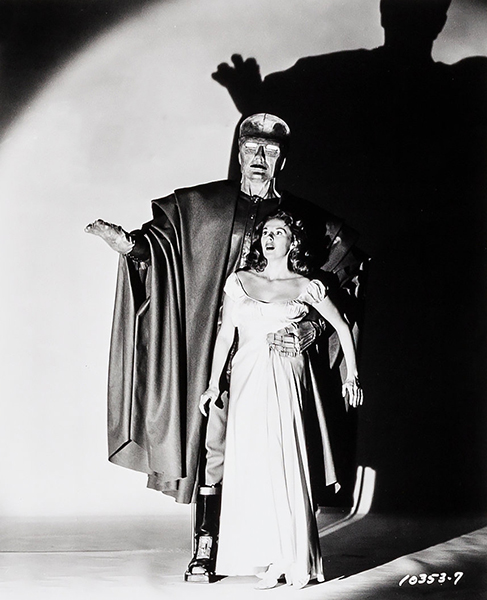 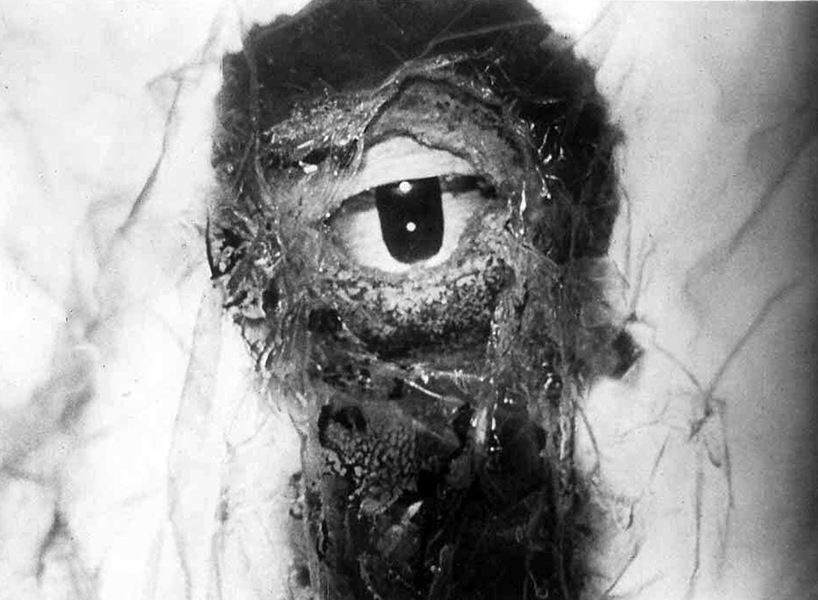 “You do not hear me. Our individual brain frequencies are now attuned, and we exchange wave thoughts.” — The Atomic Submarine (1959) 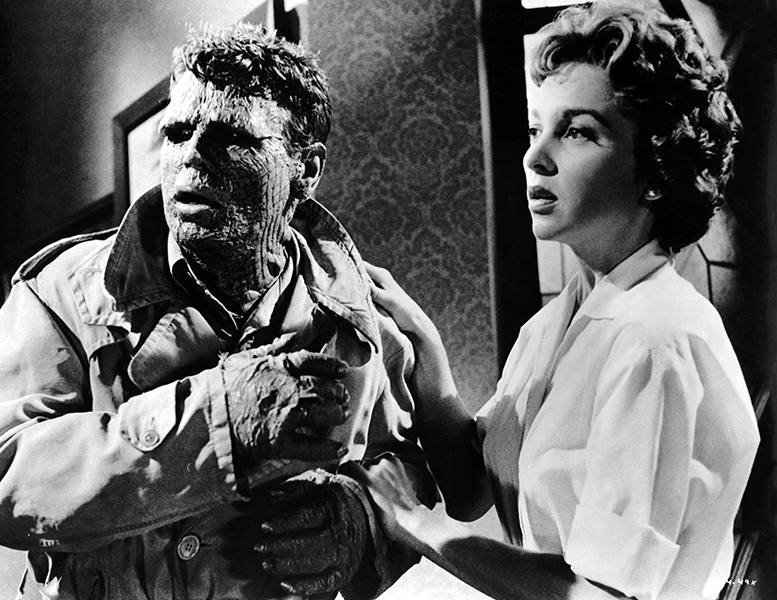 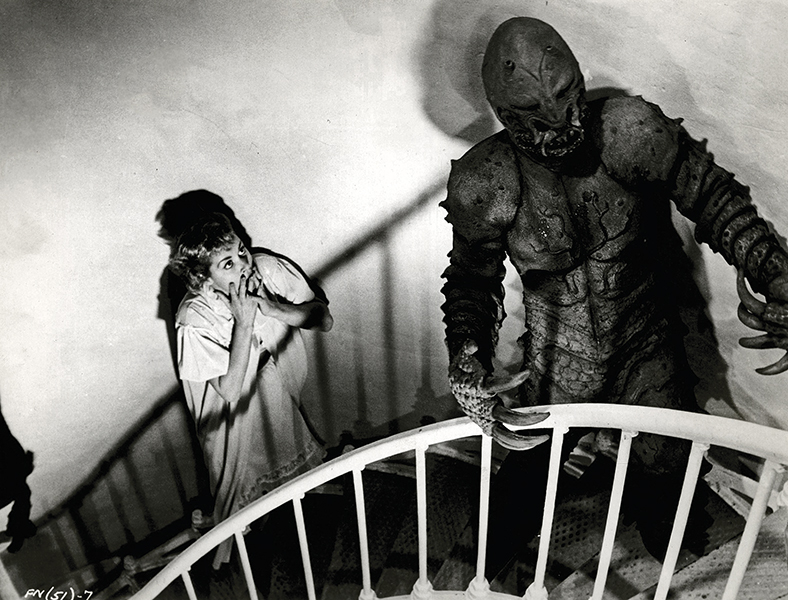 “Does he have a brain that’s capable of rational thinking, or is he just a beast? If he can think, we’re in real trouble.” — line from The Monster of Piedras Blancas (1959) 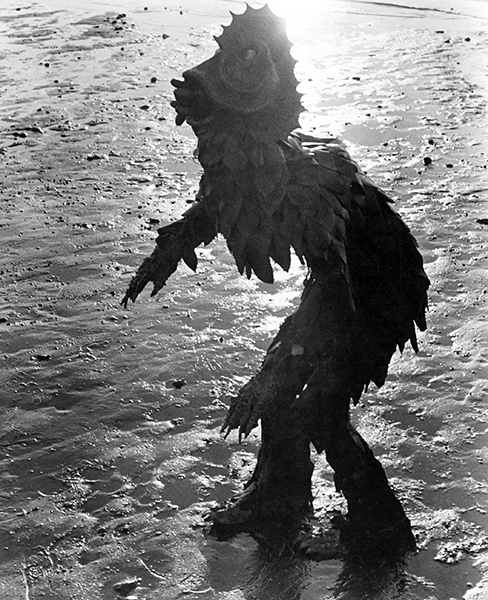 “Yeah, ever since Tina got killed, no action around here.” — line from The Horror of Party Beach (1964)