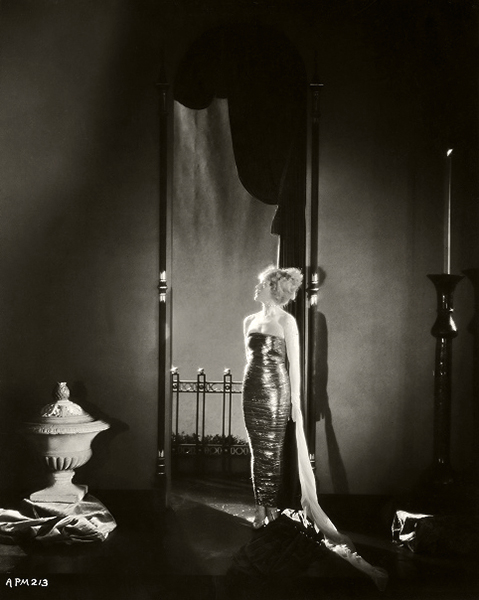 “I believe, just now at any rate, that pictures are the bigger, more important medium.” — Mae Murray 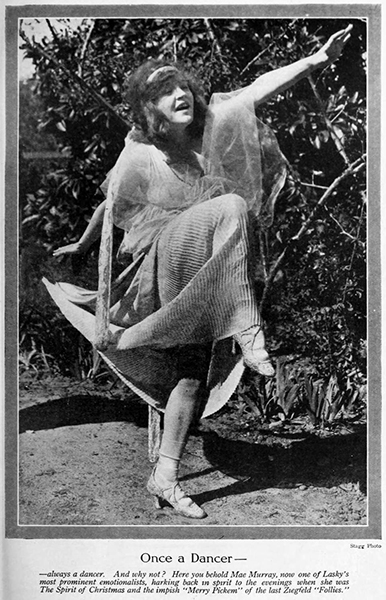 “My opportunities on the stage were always rather limited, for I was never permitted to do much but sing and dance. And I want to act! Oh, yes, indeed, I do.” — Mae Murray 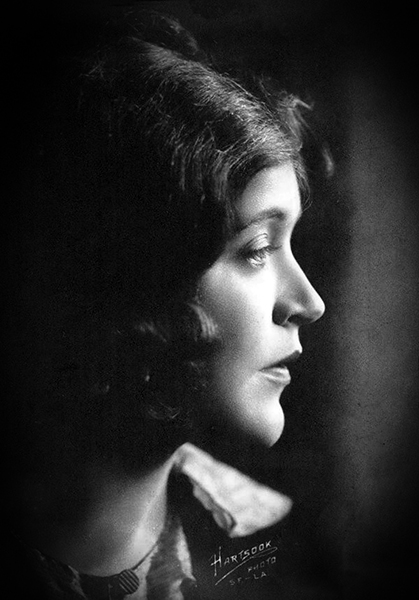 “I’m quite serious in my determination some day to be a dramatic actress, and, meanwhile, pictures are a happy field in which to grow and develop. Then, there is the opportunity of getting established more quickly, of being better, more generally known. On the stage you simply appear before a theaterful of people, while on the screen, tens of thousands may see you every night.” — Mae Murray 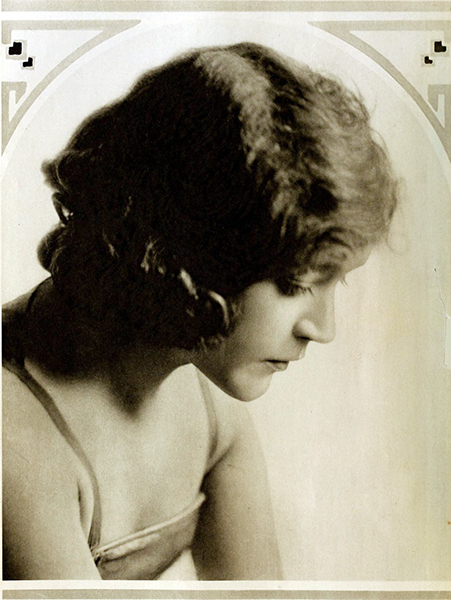 “My name is better known today, after a season in pictures, than in all the years I was on the stage. When the day comes that I shall return to the spoken drama, can’t you see what a valuable asset all this will be to me? People will be more curious than ever to see me in the flesh. And think of the change and variety in a single day’s work; you come in touch with so many phases of humanity, from smart society to the poorest slums. Why, would you believe it until I went into pictures I had never even visited the slums of a city! In a single year in pictures I’ve gained more knowledge of life than all the rest of my days put together.” — Mae Murray 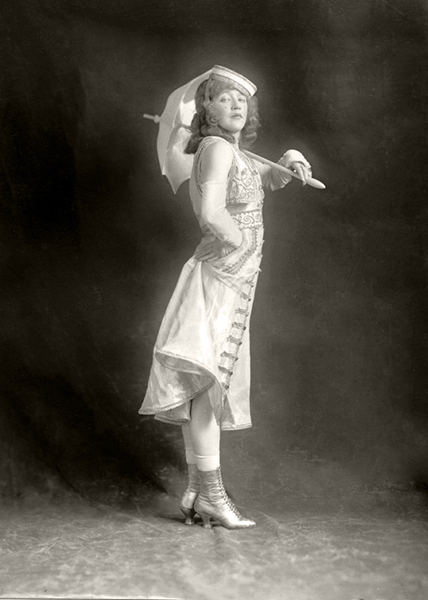 “How did it all come about that I was able to begin at the very top in pictures? Well, firmly believing that I am a child of fortune, you may remember the little, comedy screen appearance I made in ‘The Follies of 1915.’ Apparently I was more successful at that than I knew, for immediately I received dozens of offers from the various manufacturers. And I accepted Mr. Lasky’s. Nervous at first? Well, I should say I was! In my initial picture, ‘To Have and to Hold,’ I scarcely knew what I was doing at all, I felt so strange and frightened and self-conscious – that people around the studio; the noise, bustle and confusion, and the absence of an audience and footlights. I sort of gripped myself tensely, humped up my shoulders, so to speak, and plunged ahead. But all this wore off with the second picture – thanks largely to the tact, consideration and helpful suggestions of my director, James Young.” — Mae Murray 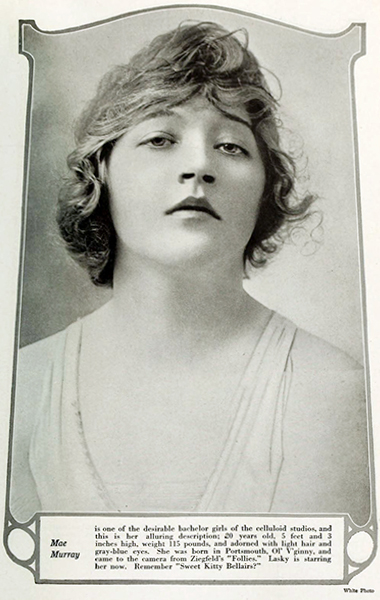 “I have never really liked Broadway nightlife, for my dreams and ambitions were centered upon something above that. The greatest difficulty I had was to readjust myself to the working hours; you see, now I arise at about the same hour at which I formerly went to bed! We have to be in the studio, ready and made up, at nine o’clock. But I don’t mind that, either, because I got used to the new order of things in the wonderful California air. Oh, California, how I love it, and how glad I shall be to return there again! You see, the picture-player’s colony at Los Angeles is really much like a touch of Paris in its freedom and gaiety and good fellowship. Oh, and the parties they give there! I had such an attractive bungalow out there that I hated to give it up.” — Mae Murray 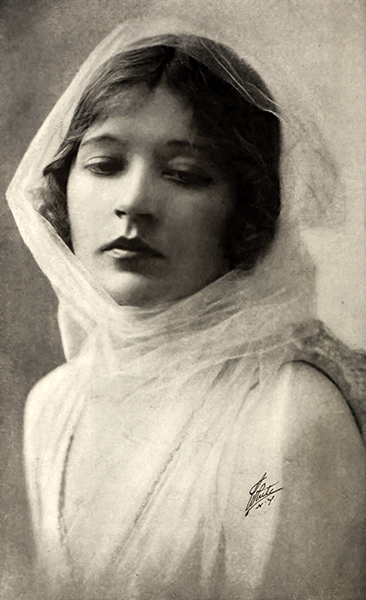 “It is very seldom that I receive a letter from a man. My audience is made up pf girls, of all ages. Little girls seem to be the same all over the world. They send me letters from Australia and New Zealand, Canada and the Philippines, England and Scotland, where my pictures are shown, and these letters are curiously alike….American girls seem to know I won’t be a bit annoyed by admiration and affection, and most of their letters close by telling me to ‘be sure to answer by return mail.’ Many of them specify ‘I’d like a letter written by hand with ink – just to show to the other girls’….This is my public. I visualize them, little schoolgirls, as they say, hurrying home to see if there’s a letter or a photograph from Mae! They call me Mae, even if they do sign themselves ‘Miss So-and-So.’ I love ’em. I shall never play in a story that would offend the mother of any of my little girls. They are my girls. I’ve come to know just the kind of play they like best. You see, they keep me informed. When I don’t answer their letters promptly they forgive me, for they know when I don’t write I’m working on my next picture, and it is always for them – my dear little schoolgirl chums!” — Mae Murray 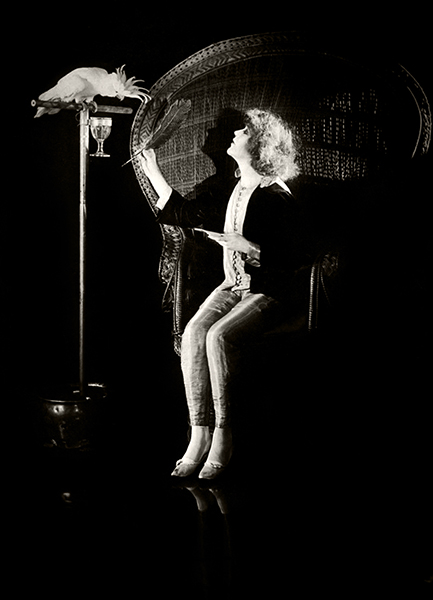 “I am assuming that a critic who knows as little as he does can’t read. Among people who know, VARIETY is a very stupid paper. That may be your fault or your staff’s. I suppose it’s 50-50.” — Mae Murray.

The excerpt came from an angry letter she sent to VARIETY‘s editor-in-chief after one of its critics panned her film Princess Virtue (1917). 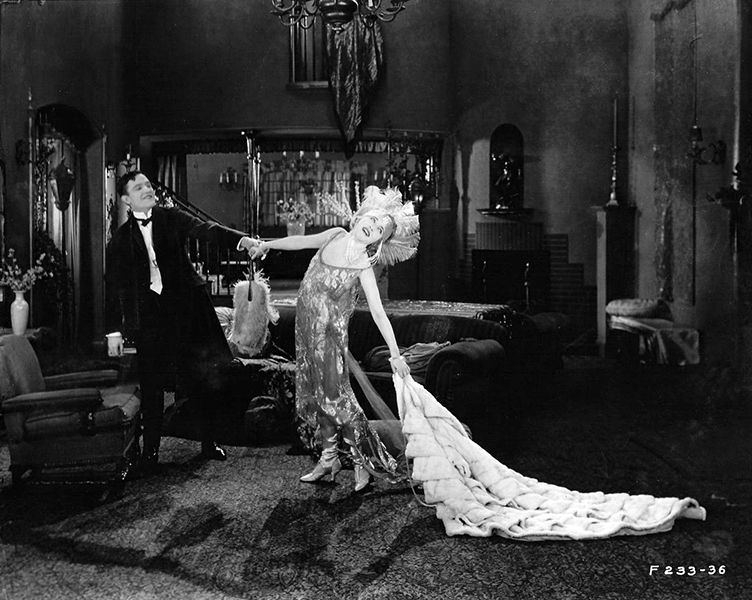 “To the American public I stand for jazz and gayety and a certain bizarre slant on life. For me to try to be Norma Shearer or Mary Pickford would be as tho the makers of Ivory Soap were to begin making gasoline. Whatever I may be like off the screen, that is what I am like on the screen and shall continue to be until the public taste changes.” – Mae Murray in 1923. 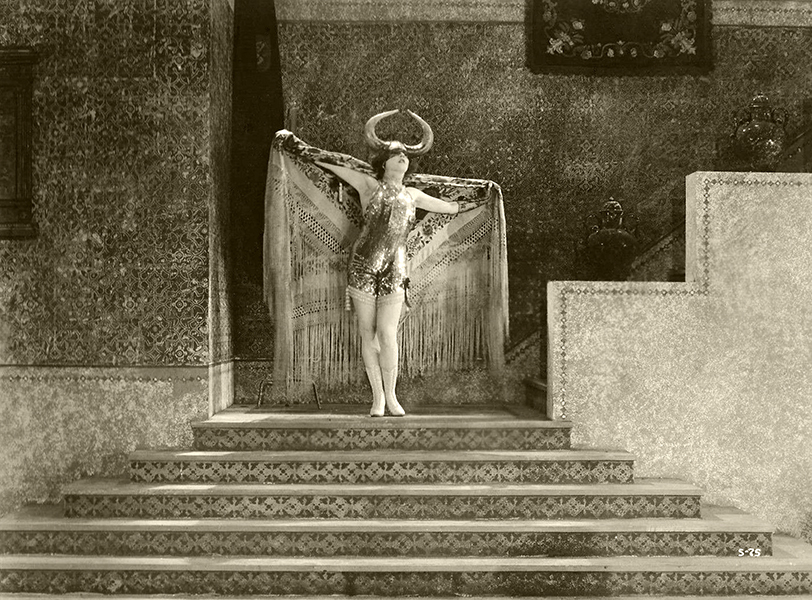 “Every picture I make must give me distinctively different parts.” — Mae Murray 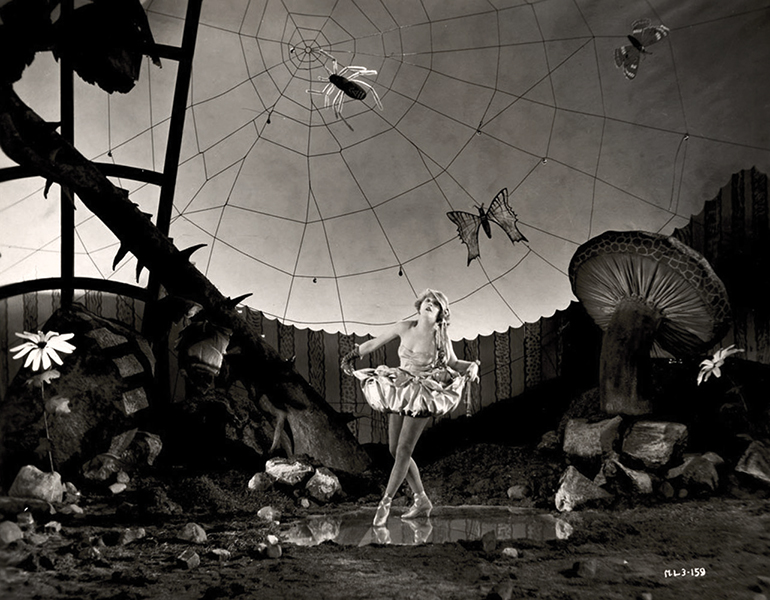 “People sometimes call my pictures trash, and ask why I don’t do big things, real things. But what are big things, after all? Bigness and reality aren’t found in one type of picture, and both these elements may be lacking in a film without taking away from its appeal: without, I mean, making the public like it less.” — Mae Murray in 1923. 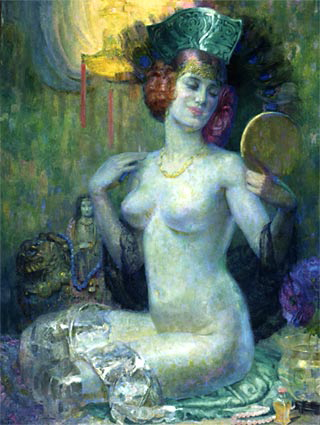 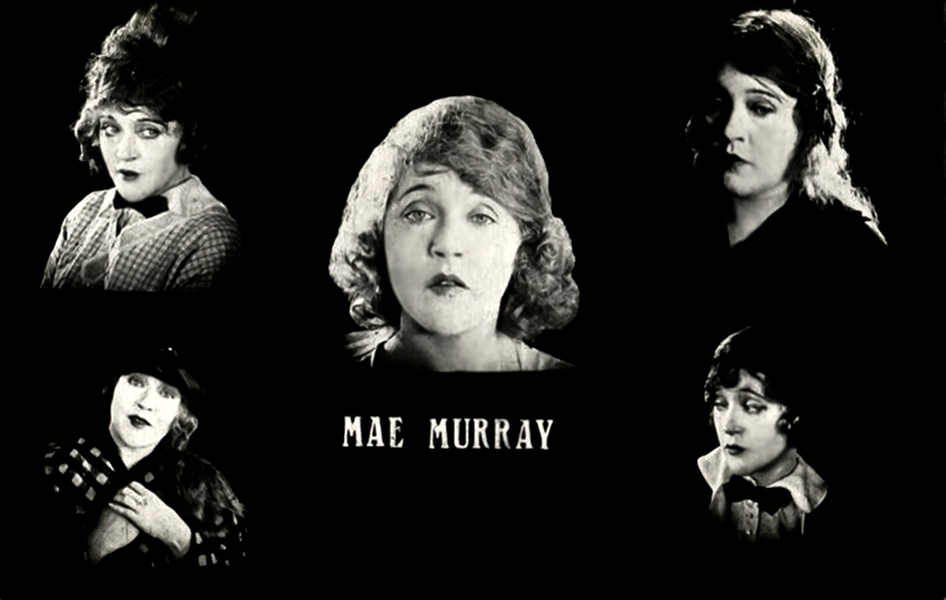 “I am not a realist by nature, and for me to try and become one would only make me acutely unhappy. All my life I have tried to rise above external situations, if they were unsatisfactory. And often they have been. Since I was thirteen and first went on the stage, I have lived as much as possible in a world of fantasy — seen only those things in life I have wanted to see — avoided the things which would pull me down and make me miserable. My dreams have always been a jump ahead of the interesting events which have befallen me. I think my dreams have actually made them possible. When grief has come for me, I have been able, because of the imaginary world I built for myself, to climb out of its reach mentally — to protect myself to the happy ending.” — Mae Murray 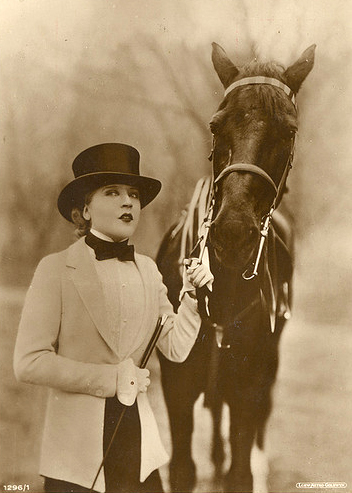 “I have found that working for the screen develops character. For one thing it is disciplinary and you become self-critical. Every two months you have a different part, wear different clothes, do different characterizations. You feel your parts intensely and really become a being of many facets. I stay right with my pictures all the time, go to the studio day after day, whether I am needed or not, and follow the whole process. It is surprising how much one learns that way. You realize some of the stupid little tricks, you have that you never suspected before.” — Mae Murray 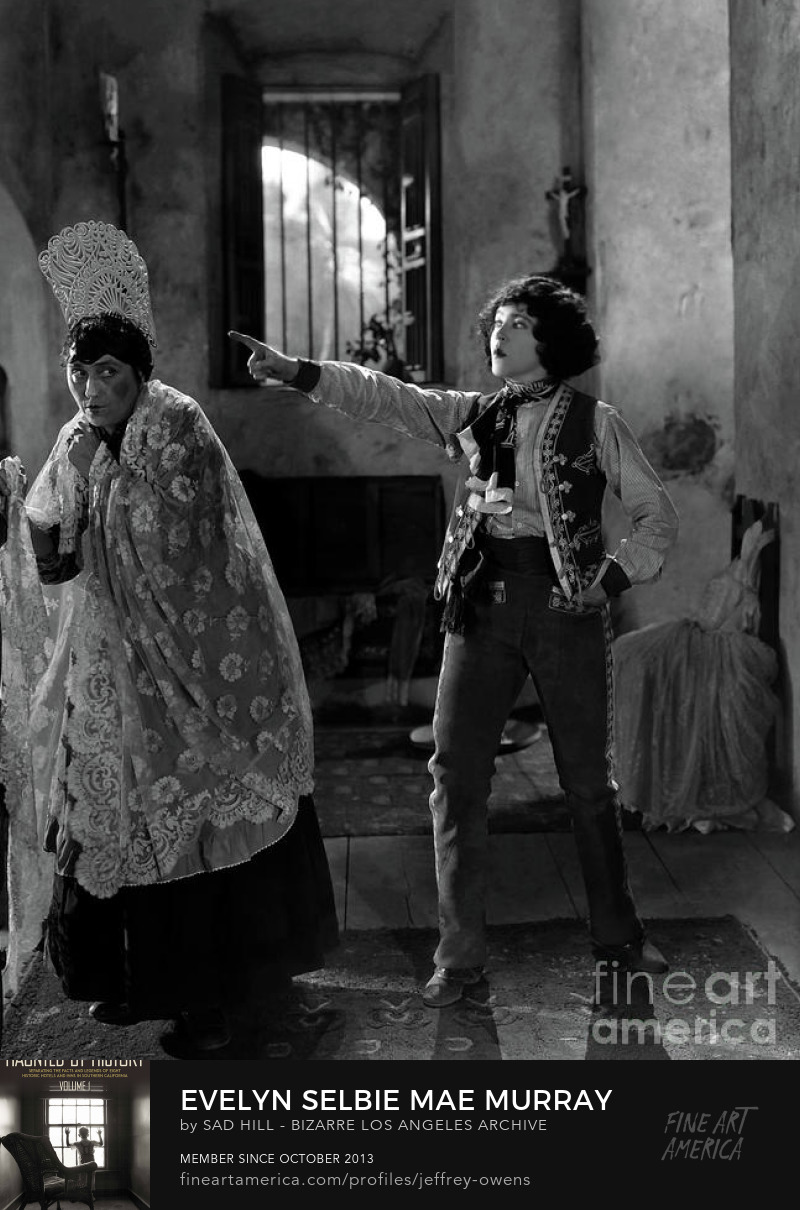 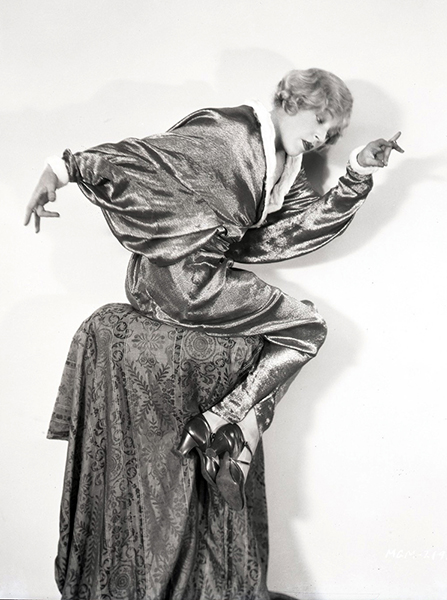 “I think that you’re only someone when people see you. Mae Murray is just a name, until you begin to be seen. Then, people say, ‘That is Mae Murray,’ then you become an entity. They can picture you, and you’re there, in their vision. Otherwise, you’re non-existent. That’s how I feel about myself.” – Mae Murray 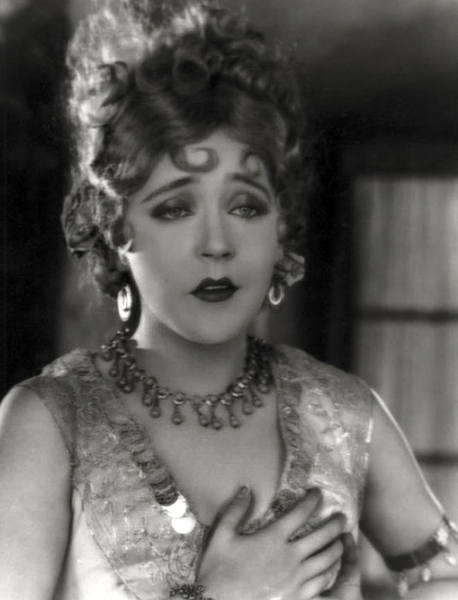 “All my life I have tried to rise above external situations, if they were unsatisfactory. And often they have been. Since I was thirteen and first went on the stage, I have lived as much as possible in a world of fantasy – seen only those things in life I have wanted to see – avoiding the things which would pull me down and make me miserable.” – Mae Murray 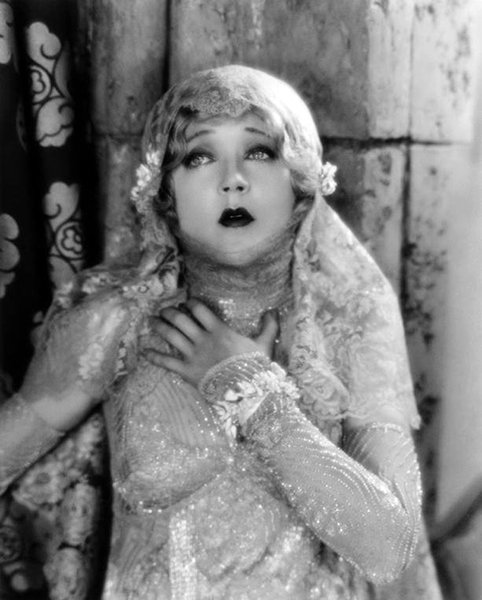 “Nothing is more nonsensical or more hideous than a couple bound together by law when love has ceased to be a divine link. Marriage should be made much more difficult, and divorce much easier. That would go a long way toward solving the present wedlock crisis in America.” – Mae Murray 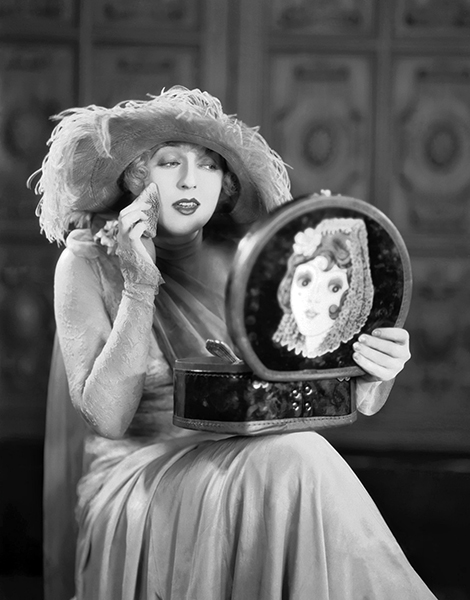 “Glamour, luxury, flaming beauty serve the purpose of taking people out of themselves and of making them forget, for a moment, real life and its cars. This, I think, is why my pictures are liked; because there’s the old Cinderella legend in them all, a story most people won’t outgrow any more than they would cease to be thrilled by riches and bizarre backgrounds. I admit I try to give them more than that, but my first thought lies in pleasing the eye.” — Mae Murray 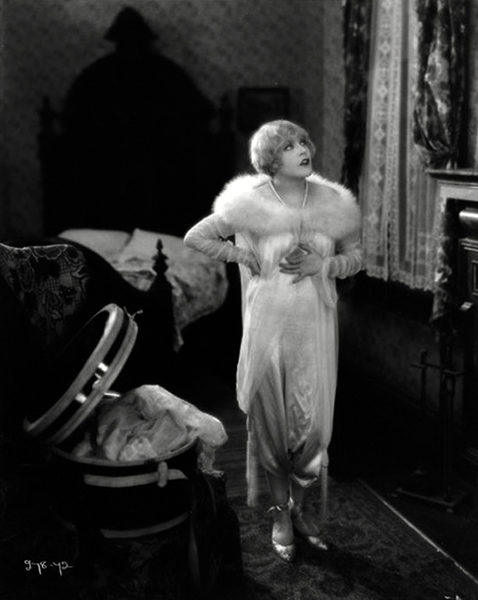 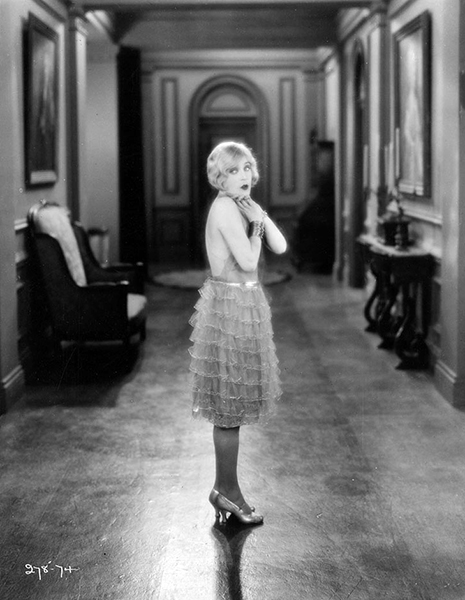 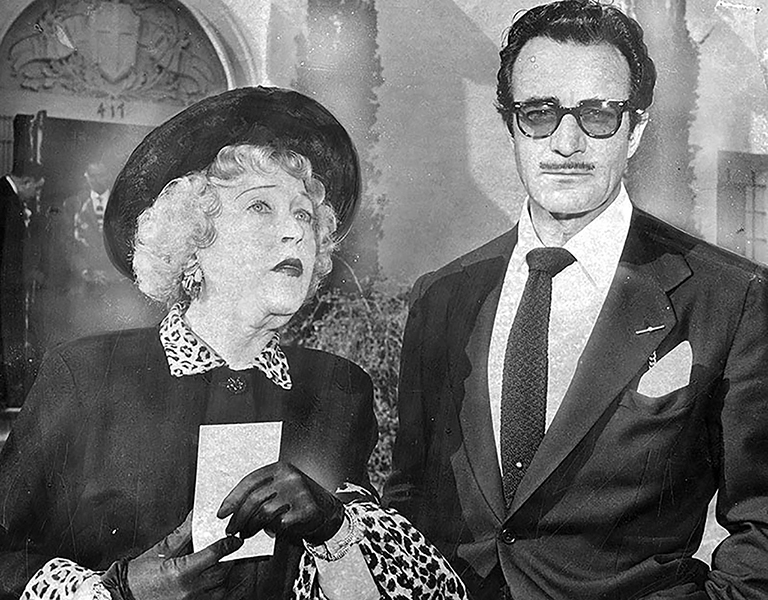 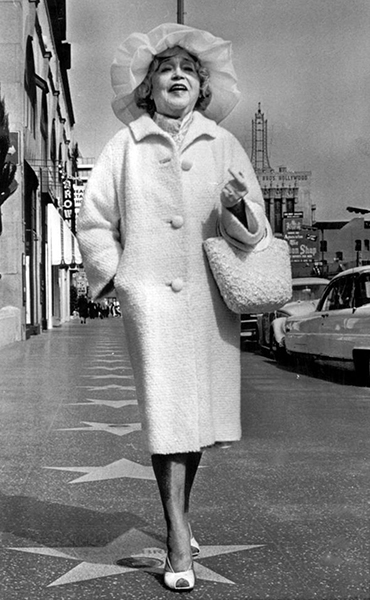 “Once you are a star, you are forever a star.” – Mae Murray, walking along Hollywood Boulevard in 1964, the year before she died.