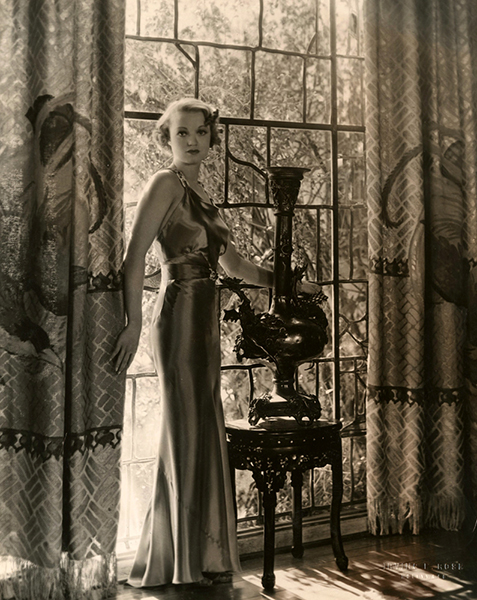 “Most of my work is dancing. When I’m in a picture, I’m either rehearsing or working in a scene. This requires approximately eight hours a day. If that isn’t plenty strenuous, just try it some time.” — Mozelle Britton

Originally from Oklahoma, Mozelle Britton came to Los Angeles in the early 1930s. She worked a number of secretarial jobs, including a stint as a casting assistant for Columbia Pictures. While there, Columbia signed Mozelle to a contract as a film player. She then appeared in a handful of films.

In 1933, Mozelle married character actor Alan Dinehart, and for the remainder of the 1930s, she devoted her energy helping his career. Three years later, she gave birth to a son, Mason.

In 1939, the Dineharts were involved in a head-on collision while driving home from a dinner party. Mozelle’s head and shoulders went through a windshield. In fact, the accident nearly decapitated her. After being rushed to the hospital, she received over a hundred stitches and underwent extensive plastic surgery.

Mozelle never fully regained her health after the accident. In 1940, she dropped out of her husband’s stage production of “Separate Rooms” due to poor health. She then spent a year in a sanitarium for an undisclosed illness. In 1942, she once again underwent surgery.

Mozelle penned the songs “When I Listen to a Love Song” and “Only You Have Kissed My Heart” in the 1940s. Both songs were intended for a Broadway musical that she and her husband were developing.

In 1944, Alan Dinehart passed away from a heart attack while fighting a case of double pneumonia. In his will, he left an estate worth $2 million, divided between Mozelle and his children. However, Mozelle’s portion of the community property amounted to approximately $50,000.

In 1945, Mozelle Britton briefly managed welterweight boxer named Gene “Spider” Jensen. The following year, she staged a production of Dinehart’s play “Separate Rooms” in Hollywood, before undergoing additional plastic surgery. In 1947, she hosted her own local radio show on KWIK, and eventually found work as a syndicated Hollywood newspaper columnist.

Around this time, she married Thomas W. Gosser, a recently divorced aeronautical engineer. During their honeymoon, a five-year-old child of one of her neighbors drowned in Mozelle’s swimming pool while trying to rescue a toy boat.

Their marriage was unhappy. In early 1953, the Gossers separated. Months after the split, Mozelle’s underage son, Mason, and his girlfriend, attempted to elope while Mozelle was in the hospital for nervous exhaustion. The teenagers returned to Mozelle’s bedside after failing to find a justice of the peace to marry them. Days later, Mozelle passed away from a heart attack at the age of 41.

Eight days before her passing, Mozelle revised her will. She left her estate of $60,000 to her mother to care for Mason until he reached adulthood. She then gave her son and her estranged husband $1 each.

Mozelle Britton was interred at Forest Lawn Glendale next to her husband, Alan Dinehart.

In 1954, Mason eloped with the same girl only to have his marriage annulled by his grandmother. The couple then successfully married a second time. However, the couple divorced around 1956.

Mason (under the name Alan Dinehart III) went on to play Bat Masterson in the 1950s television series, The Life and Legend of Wyatt Earp.