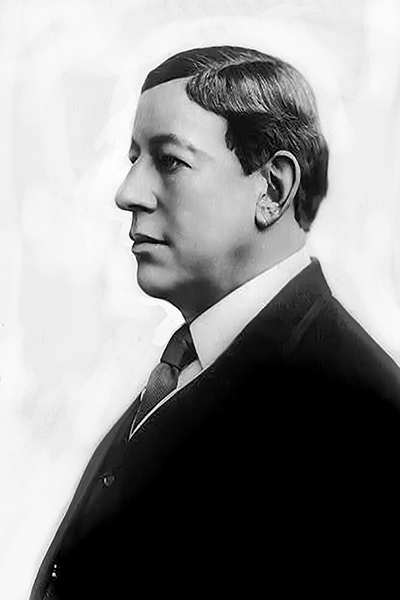 “Few stars I have know are so well loved by their companies. We all called him Wolfie, though he seldom barked or growled, and I never knew him to bite. He was a wonderful entertainer and thoughtful for the comfort of each member of his company. Many, many nights after the performance, we would sit around the stove in the lobby of a small town, listening to the wonderful stories Wolfie could tell. It was a remarkable fact that he never repeated himself. Sleeping late was one of the things he liked best to do. She always had a not put on his door, ‘Please do not disturb,’ and would make an appearance only in time for the performance or to catch the train. One morning, however, getting down to breakfast at 10 o’clock, I was startled to find Mr. Hopper, his breakfast already finished and he reading a newspaper. With a proud smile, he announced that he had been up since 6 o’clock, adding the explanation that a little child in the next room had waked him at that hour with the repeated inquiry of its parents, ‘Is beakfust ‘eddy?’ I passed several Christmases with Hopper on the road. One that comes to mind was celebrated on a private car between Cheyenne and Denver. Getting into Cheyenne, I had delegated to go out and get a Christmas tree. So before the evening performance, I sought a grocery store, bought an eight-foot tree and all the ready-to-eat groceries available, and marched down Cheyenne’s main street to the train with the tree over my shoulder.  Mr. Hopper bought out the five-and-ten-cent store, and after the performance that night, we had a wonderful celebration.” — Edward Earle

Another guest at the Los Angeles Alexandria Hotel was stage star DeWolf Hopper (1858-1935).

Hopper achieved fame for his interpretation of the baseball poem “Casey at the Bat.” However, he was more than an orator. Hopper made a couple of silent films in the mid 1910s, including Don Quixote and a silent version of Casey at Bat. He was also a very popular star of the musical comedy stage.

If his hair looks strange, it is because he wore a wig. Apparently, Hopper went bald during his childhood due to a strange illness. He also married five times. One of his wives was future gossip columnist Hedda Hopper.

When Hopper‘s film Casey at the Bat (1916) privately screened at a Broadway theater for a New York baseball team, the star made an appearance, via phone call, from sunny California.

From Picture-Play Magazine:
“Hopper was in the Hotel Alexandria, Los Angeles, and gave the recitation over the long-distance telephone, but so perfectly was every word enunciated that those gathered in New York were able to hear every syllable. This, Hopper declares, was the sixteen hundred and forty-seventh time he recited ‘Casey,’ and gosh only knows how many more are to come!”