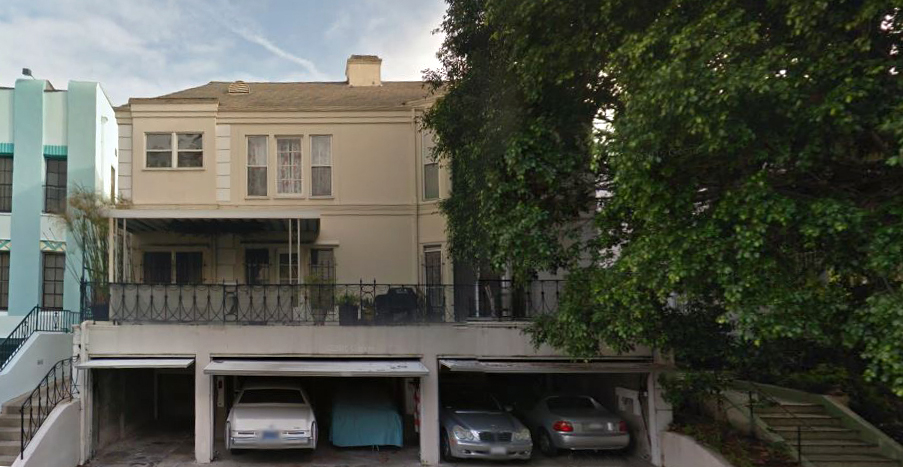 The following is a partially transcribed ghost story told to me by a couple, Willis and CC, during a taped interview. Not only did I change the couple’s names to protect their identity, but I also edited the transcript so that their ghost story is more focused and easier to understand. I also have the couple’s permission to share it.

Keep in mind that the Genesee address is private property, and that Willis and CC’s ghost story took place over 10 years ago. My providing a picture of the building does not mean that ghost hunters should try and get inside to investigate. So please don’t bother the tenants.

Now, let’s get to the story:

CC: “I remember when we lived in L.A. We lived in a beautiful [former] mansion that they [the owners] cut into lofts. Ours was a flat loft, big and square…600 sq. ft.

It didn’t take long for [paranormal activity] to happen to us. Later on, I found out that it happened to everyone, but no one wanted to say anything [about it].

One day, I took Willis’ dog for a walk while Willis was at work. Outside the building, I met our elderly neighbor, and we started talking. Then she kind of blurted it out, “Man, she’s so unhappy that I moved downstairs.”

I kind of looked at her and said, “Sorry?”

She replied, “You know, the ghost. The neighborhood ghost.”

So the next night, Willis takes off his shoes in the living room. We then decided to go somewhere, so he went to get his shoes. They were gone. We looked everywhere for those shoes. Everywhere! After we practically gave up, we found them…in the most unlikeliest of places. We opened the front door, and they fell inside the room. They were leaning against the front door of our apartment.

Willis: From the outside, not the inside.

CC: There were other incidents that happened to us. I would open the curtains in our kitchen that would outlook our street. I’d then step away and when I came back, one half of the window curtains would be closed.

One day Willis got a new cell phone and he was so excited about it. While he was showing it off, the house phone suddenly rings. He wanted to ignore the call, saying, “You know, it’s going to be work, and they are going to ask me to come in on a Saturday.”

I told him that he should still answer. So he looks at the caller ID on his house phone and discovers that it’s his cell phone making the call. Willis got creeped out and said, ‘Let’s go. I’m done. Let’s drive to the coast for the rest of the day.’ (Laughs)

Willis: That place was creepy.

CC: (laughing) He slept in his car one night. There was no denying that it was haunted. It was the craziest thing. In the middle of the night, we’d hear [a loud bang]. There would be big puddles of water in the middle of the living room.

Willis: We’d be sitting there watching TV and we’d look down and see it. No leaks. No reason for it.

CC: Once pictures started falling off the wall, I thought, “That’s enough.” I then decided to talk to the ghost. I said, “If you want to be here, that’s fine. We’ll be here with you. But you should go to the light. If you are not going to go to the light, then you need to respect that we live in this space and not play games with us anymore.” I also told Willis to talk to the ghost.

Willis: I never believed in that sort of stuff.

CC: But it worked. The activity settled down and it was really nice afterwards. Then a few months later, Willis’s job transferred him to another city. So we started packing our belongings because it was a quick move.

One day, I’m in the bedroom with his dog, listening to the radio. I had just folded a box in order to pack clothing, when all of a sudden I hear a voice urgently shout my name. It wasn’t Willis’s voice. As soon as I heard it, the top folds of the box suddenly sprang open. The dog and I fought each other to get out the door. (laughing) It scared the hell out of me. So when I returned to the apartment, I said, “That’s it! I’m not packing this box anymore.”

Oh, she [the ghost] was mad. I remember holding a glass of water while talking. Then suddenly an invisible force slapped my hand, causing my drinking glass to fly across the room.

So [one day] I ended up talking to our elderly neighbor on another walk. I don’t remember her name. But after I told her about our weird experiences, she said, “Oh yeah, she [the ghost] moves my stuff around.” And then she said, “She really likes you. She did this to me when I was moving downstairs. She wanted me to stay upstairs.”

Willis: I remember that she once warned us that the ghost would hide ours shoes. Of course, she said this right after my shoes were hidden. (Cici laughs) At the time, I still thought she was this crazy old lady.

CC: So Willis’s friends came to the house, and they said, “We need to hurry to move you.” Willis asked why, and they said, “Because, man, you told us way too many stories. We don’t want to be here when things start happening.”

In 1948, the owner was V.C. Wogoman. By this time, the house had a separate rental unit occupied by Dewey T. Dahl and his wife Grace.

Dewey died in San Diego, c. 1960. Grace, however, continued to live at the Genesee address.

In 1961, Alice B. Armstrong, a retired school teacher, lived in the main house until her death in 1964.  The house then had a number of different residents moving in and out.  During this time, Mrs. Dewey continued to live in her quarters until the mid-1970s (maybe longer).

Did anyone die inside the house? Extremely possible, but I don’t have any more information at this time.

So… that’s the end of the story for now!