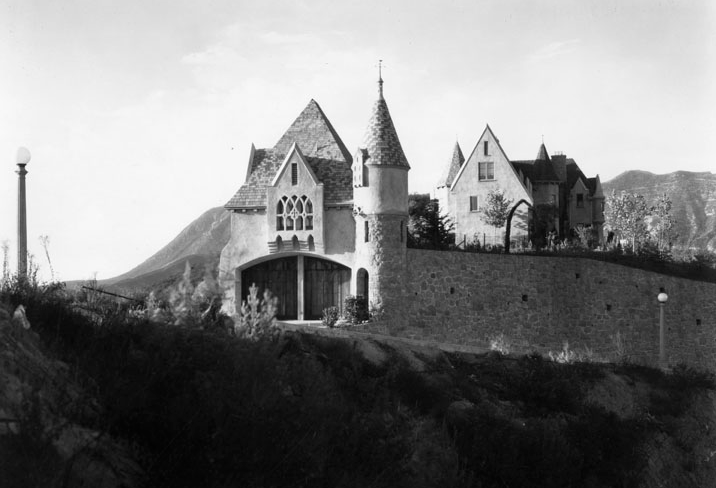 Wolf Lair Castle (aka Wolf’s Castle) is a 1927 storybook mansion built on 3.3 acres in the Hollywood Hills. Its haunted reputation dates back at least 40 years. Back in the 1970s, these ghost stories were spread via word-of-mouth. Then in 1982, it went public with the following article from the Los Angeles Times:

1921 Hideaway Has Turrets, Towers and Maybe a Ghost

Hollywood is as good as place as any to find a storybook castle outside a storybook.

Or so L. Milton Wolf must have thought when he built Wolf Lair in 1921.

Overlooking Lake Hollywood, his Beachwood Canyon hideaway seems like a small fortress with its turrets, towers and ramparts.

But inside, it’s more like a little palace with its gardens, fountains, carp pond and pool, complemented by leaded and stained glass windows – one with a coat of arms – a grand staircase, gargoyles and coffered and hand-painted ceilings.

And what castle would be complete without a ghost? Wolf Lair might even have that, too.

“He died at the dining room table…pitched forward into his minestrone,” Crane added. (Crane received the table as a house-warming gift).

The former owner had been a tenant for two or three years before buying from the Wolf family, according to Crane, “and he took off all the doors upstairs (in the two-bedroom main house) because they opened at night and nobody was there.

A Number of Wolf Lair Tales

“Then during a dinner two years ago, the fire in the fireplace suddenly whooshed up for no reason. And a picture fell off the wall.”

Crane bought the house about 1 ½ years ago and has not experienced, he says, anything so weird. But even if he did, he probably wouldn’t mind. A history, Agatha Christie and Hollywood buff who co-authored the recently published “Hollywood, Land and Legend” (Arlington House/Publishers, Westport, Conn., $19.95), Crane might shrug and even smile if something strange occurred. He could simply add it to his list of Wolf Lair tales.

“After Wolf died in the ‘50s, the house went through a series of rentals,” he said. “First, there was Doris Day, then Efram Zimbalist, then others.”

But few were as colorful as Wolf, a real estate developer who left his fairytale look on several houses in the Beachwood area.

When he lived in Wolf Lair, he kept a gibbon in a tower that had a heater running water and a perch. (“They filmed ‘Witch Mountain’ here in 1980 with Bette Davis and Robert Morley,” Crane said. “He shoots her as she goes down the stairs to the gibbon’s tower.”)

He had a moon and Venus that light up drawn in the ceiling of a cabana by the pool.

He had celebrated architect John Lautner design a gate house in teak and redwood with a green granite fireplace.

He had a two-bedroom suite in the guest cottage designed like a Tiki Room. “Turn a rheostat and stars in the ceiling come out,” Crane remarked. It has a bamboo roof and bare-breasted native girls painted on the windows.

He must have thought of his house as a mini chateau, guessed Crane.

There is no doubt that with Gregorian chants wafting through the main house, Crane thinks of Wolf Lair as home.

“The hard thing about this house, I’ve found, is leaving it,” he said. “One girl I had house sit for me could only get herself to go to work two days out of 14.”

Sitting up on a hill as it does, Wolf Lair has a semblance of distance from other homes nearby.

There is a rural view of trees and mountains and dirt roads.

There is wildlife – “an incredible number of great horned owls,” says Crane in delight. “And a lot spend time in the early evenings on my roof. They thump when they land. Then they take off and come back with some mice.”

Wolf Lair is miles away from the bustle of Los Angeles. Yet is just next door. That simply adds to its aura of make-believe.

After all, says Crane, it was built in “fantasy times,” when people like Douglas Fairbanks Sr. were making films. “And I suppose,” he said, “that the spirit carried over to the hills.”

The Wolfs moved to San Diego in the 1910s. In 1917, L. Milton Wolf tried to exempt himself from WWI military service by stating that he worked as a geographic surveyor for the U.S. government. His excuse was rejected and according to military records, he served in the Navy from 1919 to 1921.

In 1919, he married Mildred Florence Roome in Los Angeles. According to the 1920 U.S. census, he lived with her family while working as a “mining engineer”…when he wasn’t on duty. 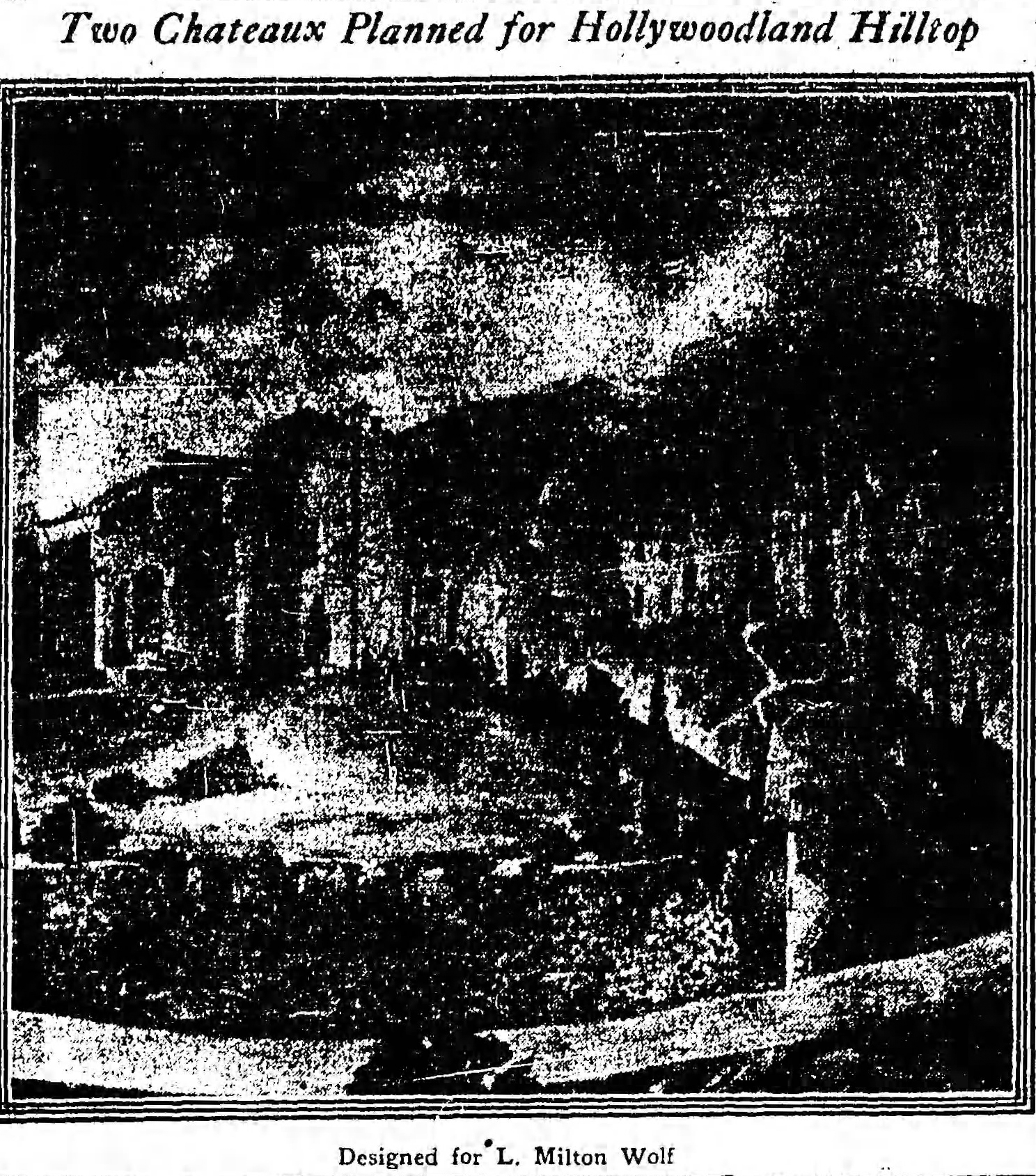 L. Milton and Mildred Wolf had two children: L. Milton Wolf Jr. (b. 1929) and Jacqueline (b. 1934).  They also had a servant living on the premises as well as Mildred’s sister, Beatrice.

In the 1930s, Wolf played a lot of golf at the Los Angeles Country, and traveled abroad with his wife. Both of them, however, shunned publicity. In fact, when their son Jr. died, it barely made the news. The grave marker reads that Jr. died in 1933.

According to the 1940 U.S. Census, Mildred R. Wolf no longer resided at the castle. However, L. Milton Wolf continued to live in his home along with his daughter, Jacqueline, and a housekeeper. Wolf later hired renowned architect John Lautner to add a guest house around 1945.

Because L. Milton Wolf is a difficult person to understand, a few legends have surfaced over the years to try and explain why he also had a secret passageway and hidden room built under the gateway of his castle. One legend maintains that Wolf used this secret apartment to seduce aspiring actresses (with money and promises to help their career) without his wife knowing about it.

Another legend maintains that Wolf owned a gibbon that lived in a tower. While the legend about the secret room being used as a love nest is speculative, the latter legend is true. In the 1950s, Wolf owned a gibbon named Missie. It lived in its own air-conditioned home and sported pink fingernail polish on all of its paws. According to the Los Angeles Times, Missie escaped the castle in 1957 and was caught near the corner of Los Feliz Boulevard and Nottingham Ave. The Times also reported that the pampered monkey preferred men to women.

L. Milton Wolf died in Los Angeles on August 18, 1972. His wife, Mildred, died on August 23, 1978, in Orange County. Both were buried in the family plot at Forest Lawn Glendale. Once again, obituaries were never published on either one of them, so it is unclear how they died.

Following L. Milton Wolf’s death, rumors swirled that Doris Day, Debbie Reynolds, Charles Boyer, Marlon Brando, the Beatles, and the Rolling Stones once lived in the house from the 1950s through the 1970s. However, all of these celebrity tenants appear to be more wishful thinking than true.

According to a person claiming to be Wolf’s grandson, Efram Zimbalist, Jr. briefly lived there in the 1970s. So did actress Shelley Duvall and her boyfriend, Patrick Reynolds. The mansion also became a filming location for Return from Witch Mountain (1978), starring Bette Davis and Christopher Lee. (source: dupontcastle.com)

In 1996, the castle was on the market with an asking price of $4.3 million. It didn’t sell and the price dropped to $2.9 million before Disney executive Phillip Barlow bought it for $2.4 million.

The castle then changed hands over the next decade. According to the movieland directory, Barlow sold it to Oprah producer Debra DiMaio in 2001. A year later, DiMaio sold it to Lionsgate Entertainment executive Jay Faires and his wife, Debbie Matenopoulos, former co-host of “The View.” In 2008, Faires and Matenopoulos tried selling their castle for $7.5 million. However, they couldn’t find a buyer willing to pay that price.

According to a New York Times article published April 27, 2011:

The castle needed major work. The roof leaked. The living room walls had been painted a dark gray, the floors had been painted black, the wall above the Gothic fireplace was covered in shells and there was what Moby calls “a low-rent country kitchen from 1979 with strange terra cotta tiles that were ugly to begin with.” He wanted a restoration, not a renovation.

So far—no further ghost stories have been reported…except for an occasional report of a ghostly gibbon shrieking inside one of the towers. However, when a faux-Normandy castle has a secret passageway, a hidden Prohibition-era wet bar, a turret built for a pet monkey, and an owner that allegedly dropped dead into a bowl of soup, I suppose anything is possible. 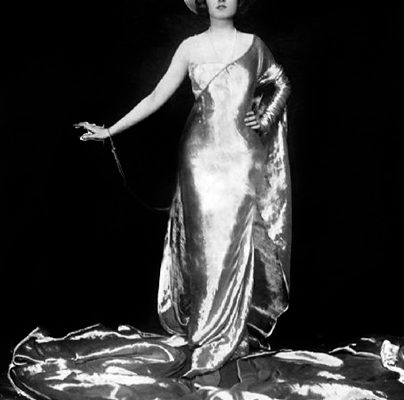