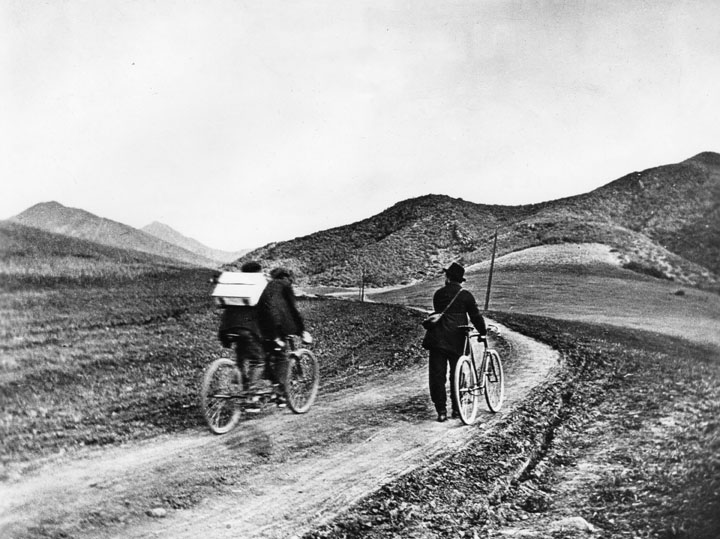 I am not the author.

The Lost Treasure of the Cahuenga Pass

Driving through the Cahuenga Pass and Whitley Heights towards Hollywood, one might not contemplate the haunted legacy left for travelers or would-be treasure hunters who wind their way through the pass each day — one that strikes a ring of similarity to the curses rumored to have resulted from the opening of Tutankhamen’s Tomb. The eerie legend begins in 1864 when a fugitive shepherd from Mexico, named Diego Moreno, told others he had hidden an amazing treasure along the trail leading through current day Cahuenga Pass and Whitley Heights.

But what was this treasure, and how did he end up possessing it?

Early in 1864, a group of agents from Mexico carried a warchest of nearly a quarter of a million dollars in gold, diamonds and other precious items to San Francisco to exchange for guns to aid the democratic struggle taking place in Mexico. They were sent by Benito Juarez, who was leading the resistance to the French-installed theocracy there. But before the agents could reach San Francisco, one of them died a sudden, unexplained death… some would say, the first of many yet to come. The remaining three of the four agents arrived in San Francisco, only to find it full of French spies, so they headed for the hills to divide the funds into six smaller parts for security – and then proceeded to bury the six buckskin-wrapped fortunes in various locations in the area, as deep under the earth as they could manage.

Unbeknownst to the three Mexican agents, Diego Moreno happened to observe their activities — and after they left the scene, the fugitive shepherd unearthed the treasures and wasted no time in heading back toward Mexico, his treasures hidden away from sight. Soon, the three Mexican agents returned to discover the treasure stolen and each suspected the others had something to do with its disappearance. Two killed each other and the third, held prisoner, suspected of their killings. The third agent eventually was exonerated but soon died himself, in a bar he owned near Tombstone, Arizona.

Following the traditional trail of suppliers which wound through the current-day Cahuenga Pass, Moreno stopped at a small tavern in the area called La Nopalera, or Cactus Patch, and he stayed the night. It was during his stay that he reported to have dreamed that he would surely die if he dared to enter Los Angeles with the stolen goods in hand. Unnerved by this premonition, he chose to bury the treasure-filled pouches under a large ash tree. He continued on into Los Angeles, and as it turns out, fell gravely ill. His friend Jesus Martinez aided Moreno as best he could, and to repay his kindness, he told Martinez of the buried treasure. He was said to have told him: “On the side of the pass about halfway from the tavern to the summit on the hillside opposite the main road.” Moreno, ever sicker, fell into violent convulsions and died.

Martinez and his son, Jose Gumisindo Correa, after burying Moreno, headed towards the pass to find out if the story of the buried fortune was indeed true. Just as Martinez discovered the ash tree and before he could begin to dig, he suffered a seizure and died… on the spot. Correa, seeing this before his eyes, thought the treasure cursed, he fled, abandoning the amassed fortune lying just within reach.

Some years later, in 1885, a Basque shepherd who grazed his flock in the hills of the pass, discovered his dog excited by something near a tree. he unearthed a tattered parcel of jewels and coins and thought himself fortunate indeed. He was unaware of the five other such packages hidden in the area. Despite this, he proudly displayed his found treasures in a local tavern and decided to return home to Spain with his newfound wealth. Approaching his homeland, he stood on the rail to catch a glimpse of his arrival — but something terrible happened. As the ship approached the dock, he fell over the rail and into the water, and began helplessly sinking under the weight of the treasure. And why didn’t he release the treasure — if only to save his life? As it turns out, he was so nervous about losing the treasure to thieves, he had sewn the valuables into pockets hidden in his clothing and was therefore unable to free himself from their heavy weight. He perished, dragged down to the bottom of the sea by the treasure itself. 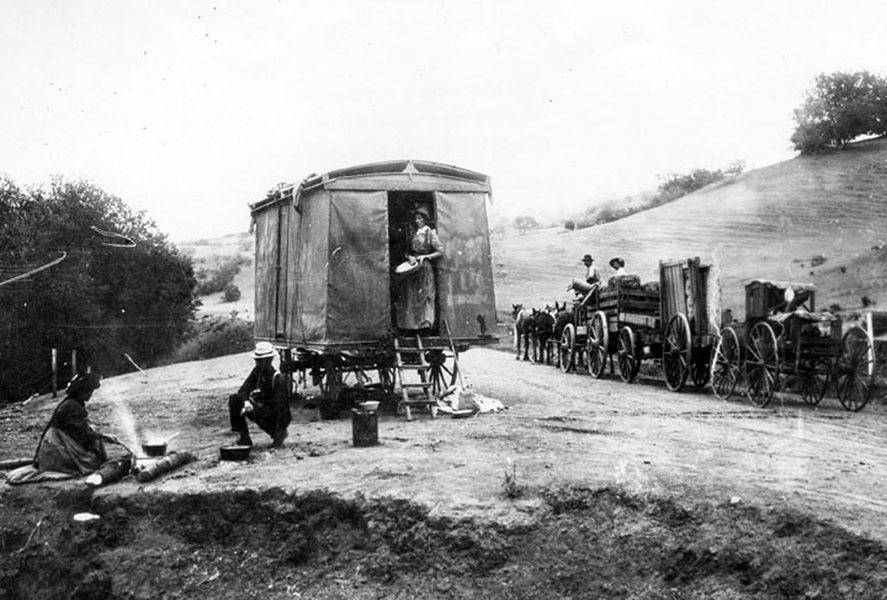 Nearly ten years later, Martinez’ son, who fled the treasure upon his father’s death, had grown older and less fearful of the treasure. He was now a grown man and had held a position as a Los Angeles lawman. It was time to seek out the treasure again. But prior to his attempt to find it, he was killed on the outskirts of town at Boyle Avenue by his own brother-in-law.

Through the many years since the legend began, many local treasure hunters had considered making attempts to locate the leather-wrapped parcels, but all were convinced it was not worth flirting with the curse which had taken so many lives. However, in 1939, Henry Jones, a mining expert from San Francisco teamed up with Walter Combes, a mechanic from Bakersfield, and his uncle, Ennis Combes, an inventor, to see if they could locate the lost treasure — and challenge the curse that followed its legend.

Using Ennis Combes’ newly designed metal detector, the men became convinced they had found the lost treasure about 14 feet below the surface in the parking lot behind the shell of the Hollywood Bowl. The three men asked for and were granted permission by the Los Angeles County Board of Supervisors to dig in the area, provided they granted a share of the find to the local government.

After getting this close, the Combeses had a change a heart, attributed to their fear of becoming the next victims. They departed, taking their metal detector apparatus with them. But the story had captured the imagination of the public — and ‘curse or no curse’, newspapers proclaimed that the search would get underway. Henry Jones assembled a new team that included Ray Johnson, former Hollywood vaudevillian, and Highland Park inventor Frank Hoekstra.

In the heat of the fall sun, on November 27, 1939, three film crews, CBS radio and a slew of reporters and others, joined hundreds of curious onlookers and the would-be treasure hunters as they began to drill through the heavy asphalt outside the Hollywood Bowl.

The carnival-like atmosphere continued as an upstart vendor sold popcorn, a security fence was erected outside the site and hired guards worked overtime, tossing out would-be claim jumpers to the treasure. Each time the animated needle on Hoekstra’s ‘electrochemical recorder’ went wild, they were further enthused to continue the dig. After 24 days of shoveling more than 100 tons of earth and mud to create a huge nine-foot-wide, forty-two-foot-deep hole, they hit a boulder and called their hunt finished.

Not more than a month later, Henry Jones committed suicide, depressed over his treasure-hunting failure and divorce from his wife — his name falling alongside the others who had attempted to locate the lost treasure. Later treasure-seekers were denied permits – the story of the treasure put to rest. Even the one-day hunt by William W. Boyle of Norwalk using his home-made ‘mineral rod’ which he said would locate gold up to 10 miles away, produced no signs of the long-lost treasure.

And so it goes, the mystery of the Lost Treasure of Cahuenga Pass has yet to be solved. Are the bundles of treasure, carried up from Mexico so long ago, still hidden away? Do the leather-wrapped parcels sit quietly under what no-doubt a much different landscape than was found in the 1800’s? Does the treasure lie just underfoot, perhaps even somewhere in Whitley Heights? The description would seem to indicate that it is likely: “On the side of the pass about halfway from the tavern to the summit on the hillside opposite the main road.” Perhaps we shall never know. The mystery of the Cahuenga Pass Treasure may perhaps remain just that — a mystery.

But if ever find yourself digging up on the hill, and you perchance discover a small flap of worn leather or some old fabric and cord, don’t be so quick to ignore it. Who knows. You may have just discovered the long lost Treasure of the Cahuenga Pass! 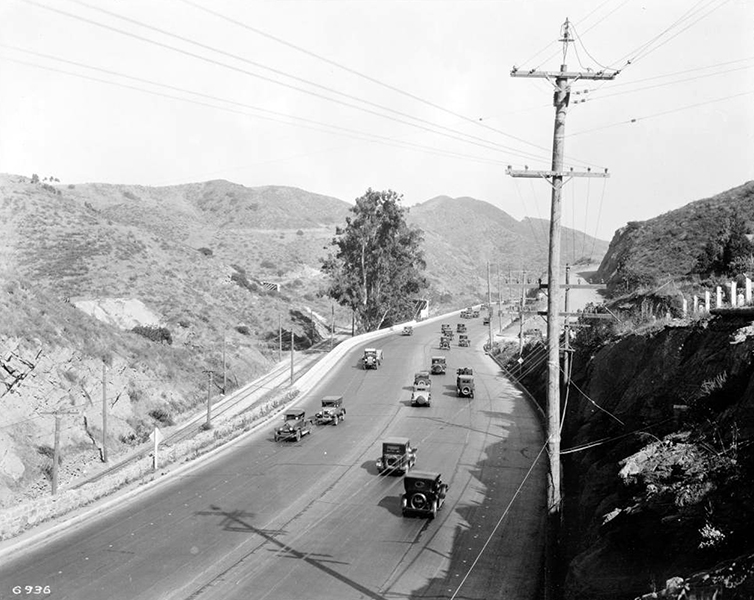 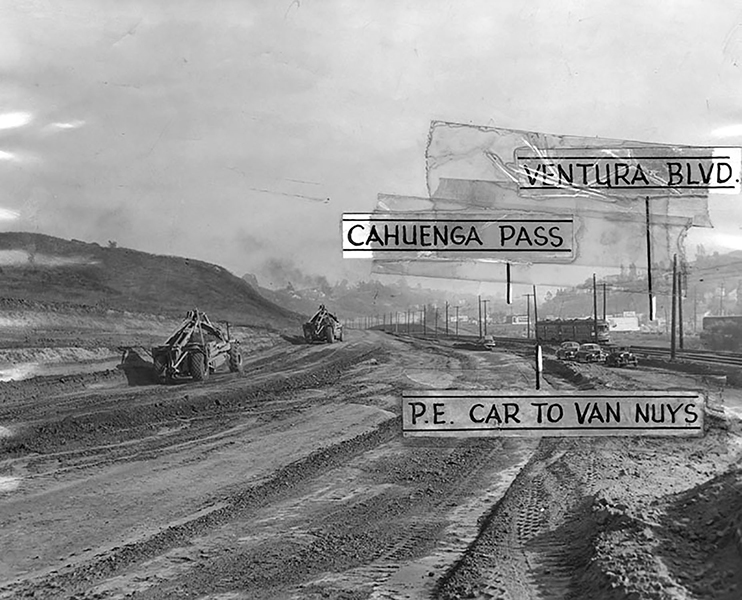 The Hollywood Freeway (U.S. Route 101) construction at Cahuenga Pass in 1947.

About the Cahuenga Pass site:

In 1831, angry landowners took arms against Alta Governor Manuel Victoria and his forces in what became known as the Battle of Cahuenga Pass. The confrontation killed two men, and Governor Victoria received injuries to his face from a lance. Since that time, people have found a few buried cannonballs in the hills near the freeway. 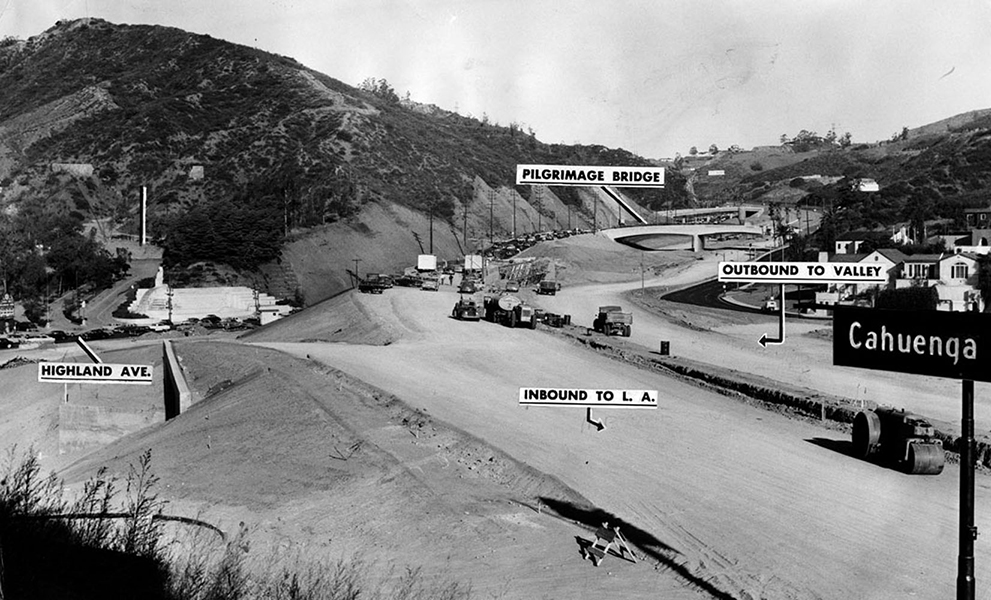 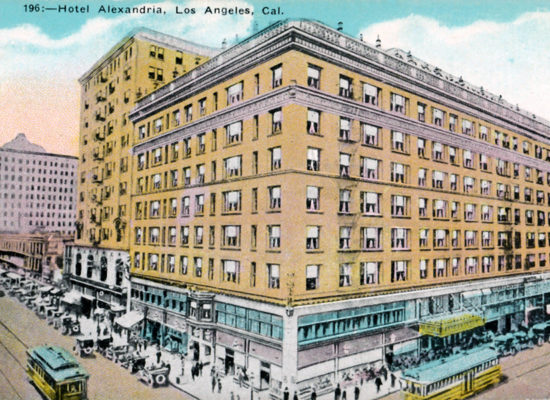 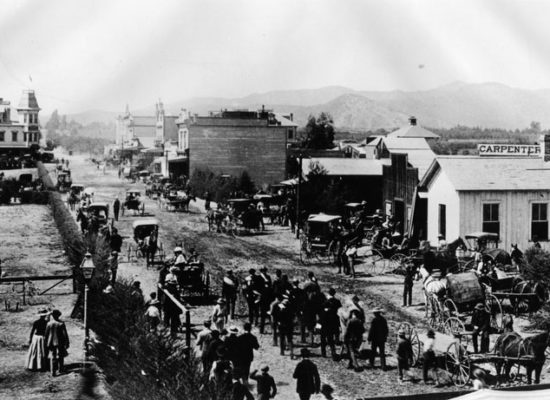