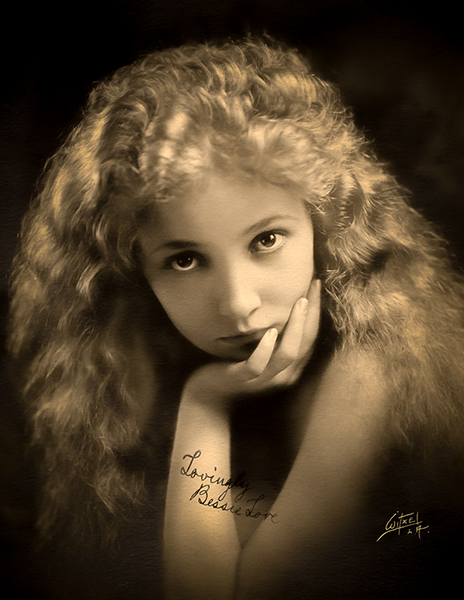 “Mother and I were visiting one of my girlfriends at the studio where Mr. Griffith was putting on a new play. I noticed he looked at me rather hard a couple of times. After a while mother and I were about to go, when Mrs. Brown, the studio matron, asked us if we would stop in at Mr. Griffith‘s office on our way out. For sure we did. That night, at home, mother said to me – I remember it perfectly – ‘Now Bessie; just because Mr. Griffith has given you this big chance in the pictures, don’t let your head swell.’ Oh, but I’ve jumped a piece of the story. During that afternoon, while we two were visiting at the studio and after Mr. Griffith had looked at me so hard several times, the great man asked me to step out in front of the camera and act for a few minutes apart which he explained to me. And I did. And I think – though it was my very first attempt – I must have pleased him, or mother and I wouldn’t have been invited to see him in his office.” — Bessie Love 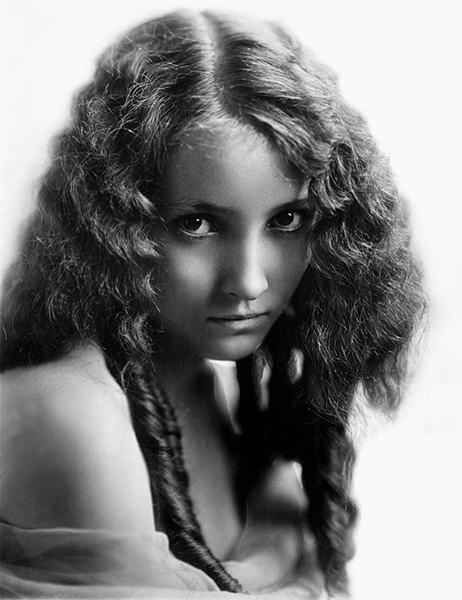 “Down in Texas – I lived as a kid in Midland, you know – it was my ambition to grow up and be a schoolteacher. Of course, all kids’ dreams are funny – to grownups, because – well – because a girl can be a schoolteacher in Texas, or she can get married. And then this blessed opportunity came along. I know I’m talking at random – skipping the years and things – but I like to….Some of my friends at the studio think I resemble Mary Pickford. Do you?” — Bessie Love 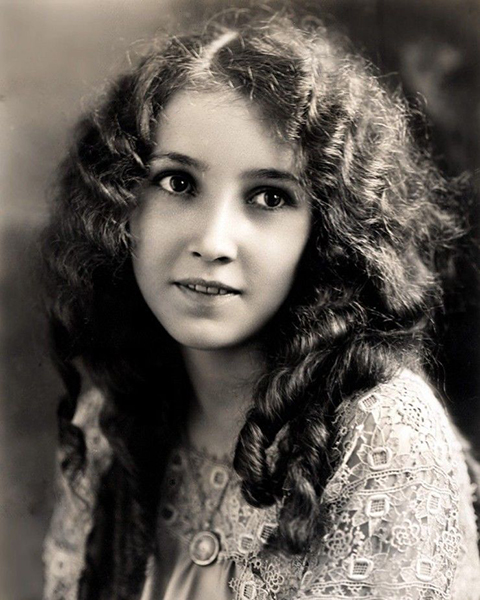 “Do you know, I think if a girl wants to be a truly great actress she must study. I spend my evenings at home, mostly studying. Dad’s a doctor and a great student. And some of I get from mother, I guess. She’s a great reader. I suppose – I suppose my sudden success, never having had the least but of theatrical training, may make a whole lot of other girls – like me – crazy to act in the pictures. Just tell them this, will you? I got my chance like one in a million. And it isn’t easy. Oh, I know about the girls that have acted since they were babies and would ‘just love to be in the movies.’ But they don’t know a thing about it. Once in a long, long while a girl’s born with a face to fit the films, and gets born at the same time with a fitness to go with her face. Do you know what I mean? When that happens, she’s a whole dishful of luck, because it’s poppies to peanuts some director will find her out. And then it’s a whole dishpan full of work – for her. My word, if girls knew anything about the work they have to go through to make good while the camera’s watching you they’d stampeded from the movie studios instead of flocking to them!” — Bessie Love 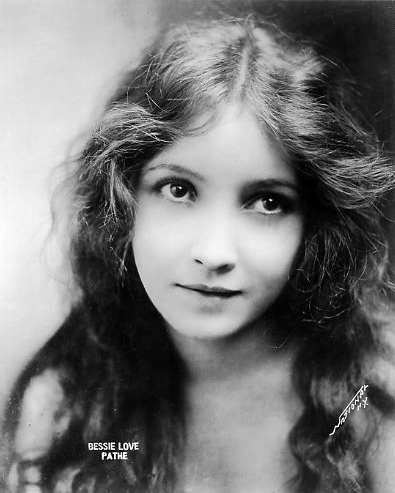 “There is no place like my beloved Los Angeles and my darling home back there….Perhaps there is something lacking in me, but New York doesn’t impress me so much. Eastern people out home have said to me, ‘Just wait until you see New York.’ I don’t know what I expected to see but for one thing, I expected to see buildings that almost touched the sky. Of course, there are the Times and Woolworth buildings and others, but they are the exceptions. I expected them to be all like those. One thing I will say, New Yorkers don’t stop at anything – and they get away with it, too. The subways and the elevators are marvelous. I am told that the people commute from three states. Bit look at the way we get over the ground in California – and in much nicer fashion. We live in our cars when we are not busy and think nothing of going to Santa Barbara to the theater, which on only 135 miles. It seems to me that there is absolutely no home-life in New York….Well, I suppose there are people who can make a home in a big house that looks like a jail, with nothing to look at but more jails, with a cement court for a garden; but I couldn’t, because I’ve never known anything bit lots and lots of room to live and breathe in.” — Bessie Love 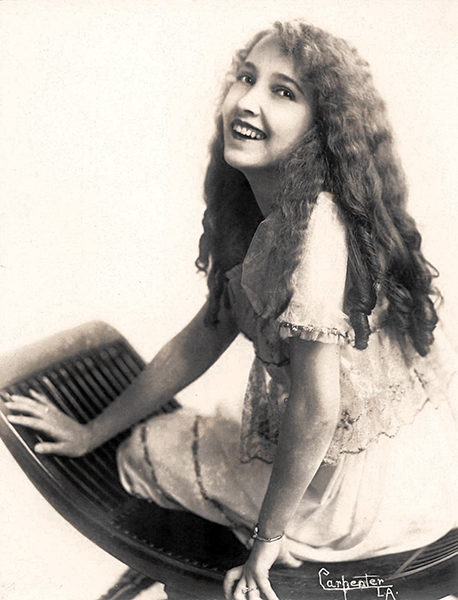 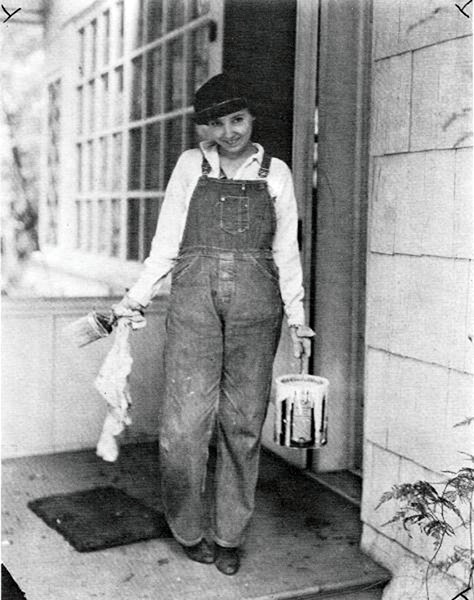 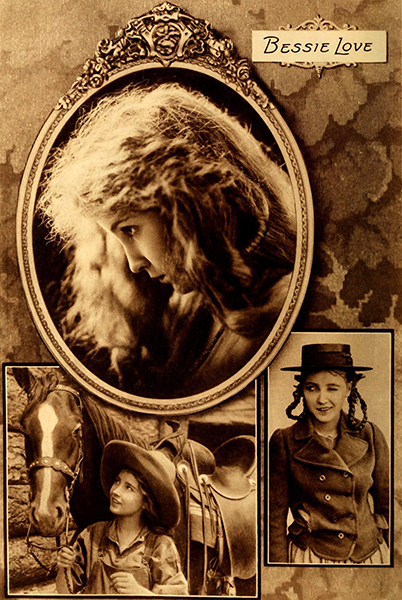 “You see, I was born in Texas – and you must admit that there’s lots of room down there to be born and also to live in. Then we moved to Arizona, and how I loved it – and do to this day – every bit of it, Indians and all. Then we went to California; so you see, I have never know anything but Western life. I have enjoyed every minute of my trip East, especially after the two weeks in Florida. But won’t I be glad to get back to my ‘Little Gray Home in the West’!” — Bessie Love 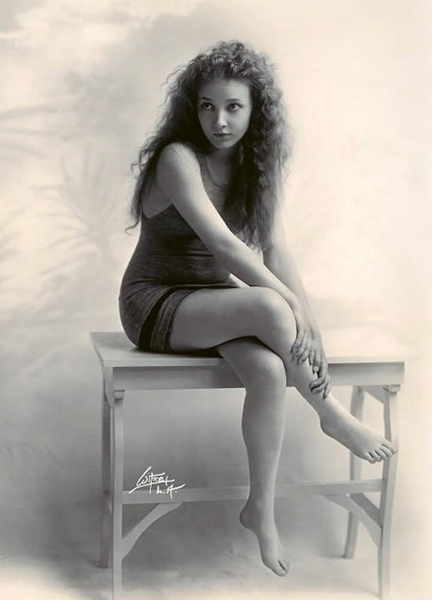 “I never thought about being ‘accomplished’; I just do what I like to do and what I have to do. For instance, I can swim like a fish, as you would realize could you have seen me working down in Florida where I spent a whole day in the water; and I can ride like – everything! And I can drive my car like ‘everything’, too – if that is an accomplishment. When I was learning, I had my chauffeur standing on his head most of the time, while he remarked reprovingly that he didn’t turn corners that way; and poor dad nearly had a nervous prostration the first time he went out with me, but I’m a perfectly safe driver now. Of course, I sing a bit and play the piano, and the ukulele; but that’s not an accomplishment – it’s a habit.” — Bessie Love 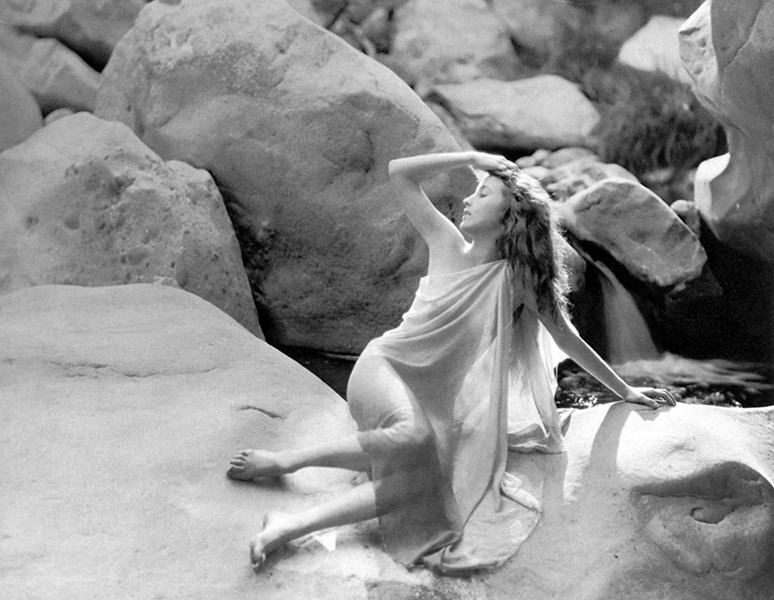 “I don’t want to go on the stage and I do like the pictures. If I didn’t, I wouldn’t be in them. It’s true that I got my big chance as the Swedish maid in ‘The Flying Torpedo.’ I’m working on my 14th picture, and have been working not quite two years. It sounds easy, but it isn’t. If all movie-mad girls knew all they have to go through in order to make good in the movies, they would stampede from the movies instead of flocking to them. Of course, I have had unusual success, but it is because I happened to screen unusually well, and I’ve had a wonderful mother to take care of me. Also, I have been most fortunate in getting the right type of plays and in having the right directors. Sometimes the work is very hard, but it’s always interesting and sometimes it’s just fun.” — Bessie Love 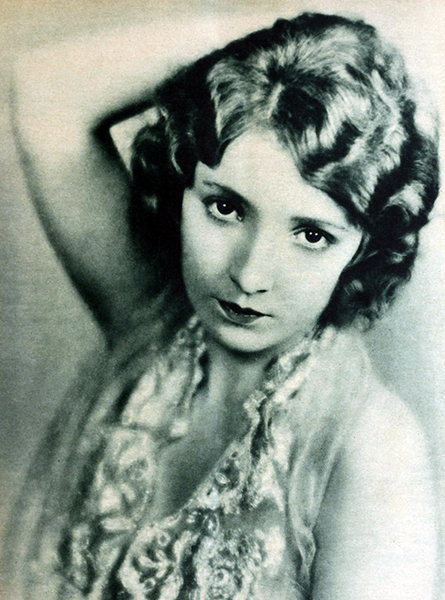 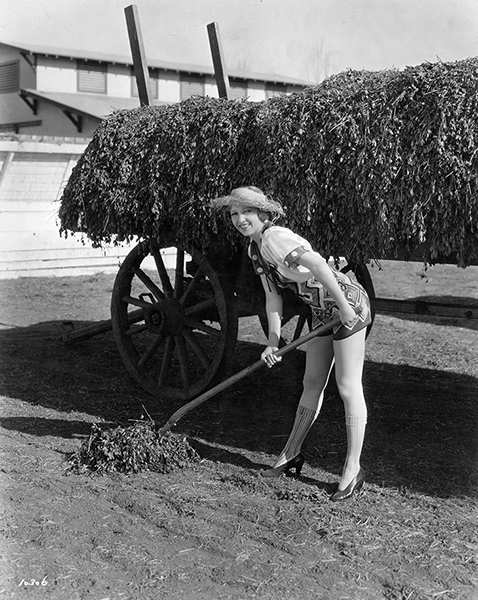 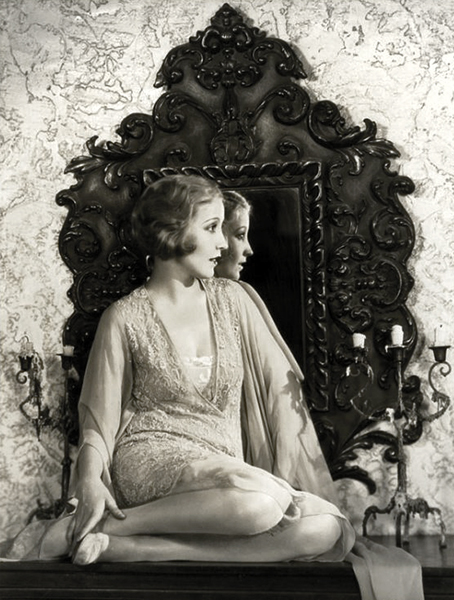 “I really was never off the screen – only for a while I just made ‘quickies’ that nobody ever saw.” — Bessie Love 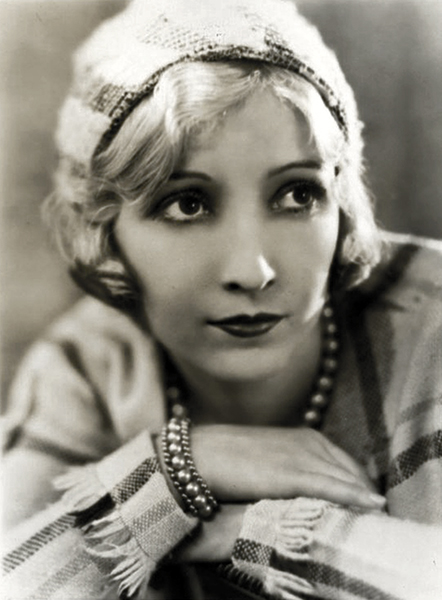 “So after I finished the picture with Harry Cohn called ‘A Matinee Idol’ and talkies were on the way, I decided what I needed was stage experience. And it was a good idea to get it quick while three pictures with me in them were still being shown – you know, so it wouldn’t look like I’d been washed out of them. Especially as I had made one little talkie as an experiment with Eddie Foy for Warner Brothers. Funny, that was vaudeville, too, wasn’t it? So I managed to get into the stage play ‘Burlesque,’ the first of the backstage comedies, playing in San Francisco and up and down the coast. More vaudeville experience, you see.

“After that came the chance with Fanchon and Marco, more vaudeville in the picture theaters. Seventeen weeks of it. It’s a totally different life, a different type of people entirely – people who somehow manage to be generous and friendly and keep their family lives intact, playing four and five shows a day and living in trunks. I loved them.” — Bessie Love 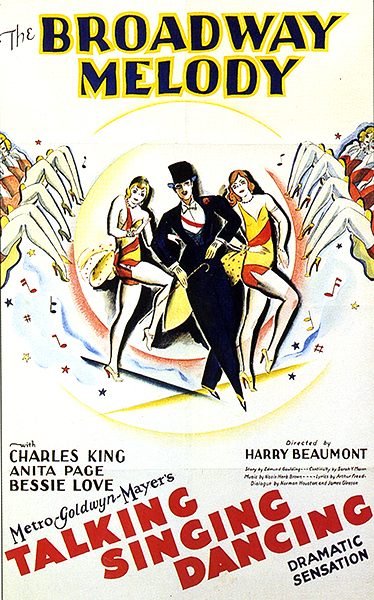 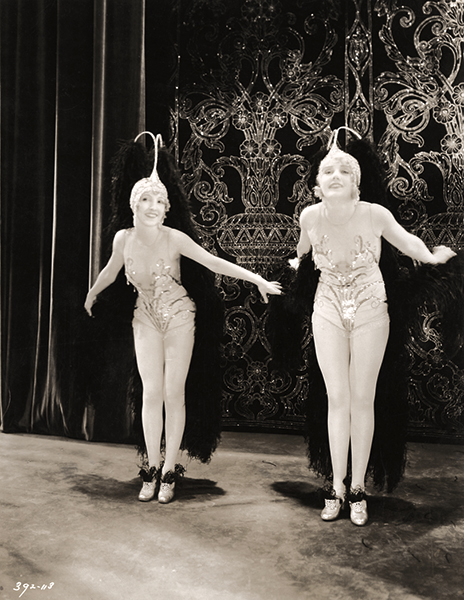 “And then, oh joy, [MGM] wanted me for this ‘Broadway Melody,’ a backstage picture on which all my vaudeville experience would count. Remember how the girls in that – Anita Page and I – are trying to break into New York? That’s just what I had been trying to do in real life. When ‘Broadway Melody’ was completed, no one said a word about contracts. It was with less enthusiasm that I bought a ticket for New York to take up the vaudeville where I had left off. I went back to the lot to get a few things and I met Irving Thalberg.

“‘You can’t go. No, no, no,’ he almost shouted at me…and they were the sweetest words I’d heard in years. So it’s a five-year contract now – which will probably be the end of my picture career.” – Bessie Love 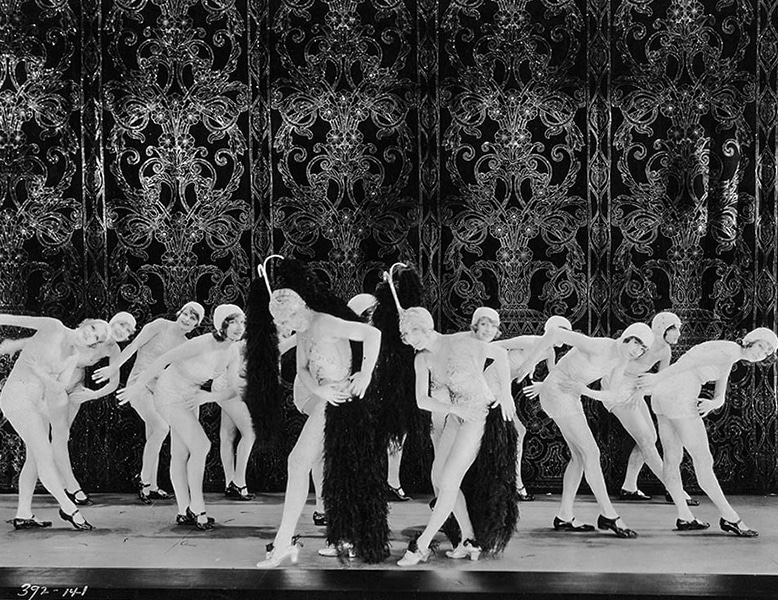 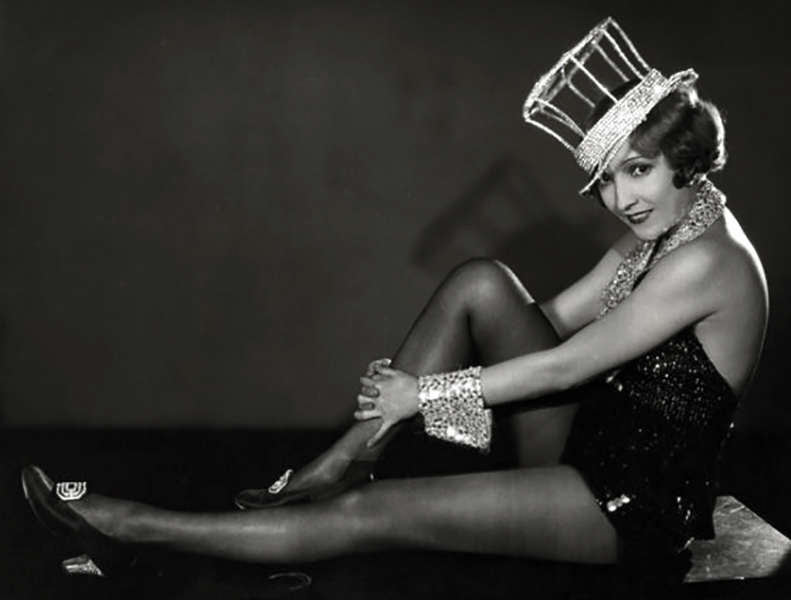 “Getting that part in ‘Broadway Melody’ is what I call a real break. It was the biggest part of my entire career and it came just when I needed it the most. Gee, I was happy when I saw the picture for the first time. And I was still happier when I got my contract from MGM as a result.” — Bessie Love 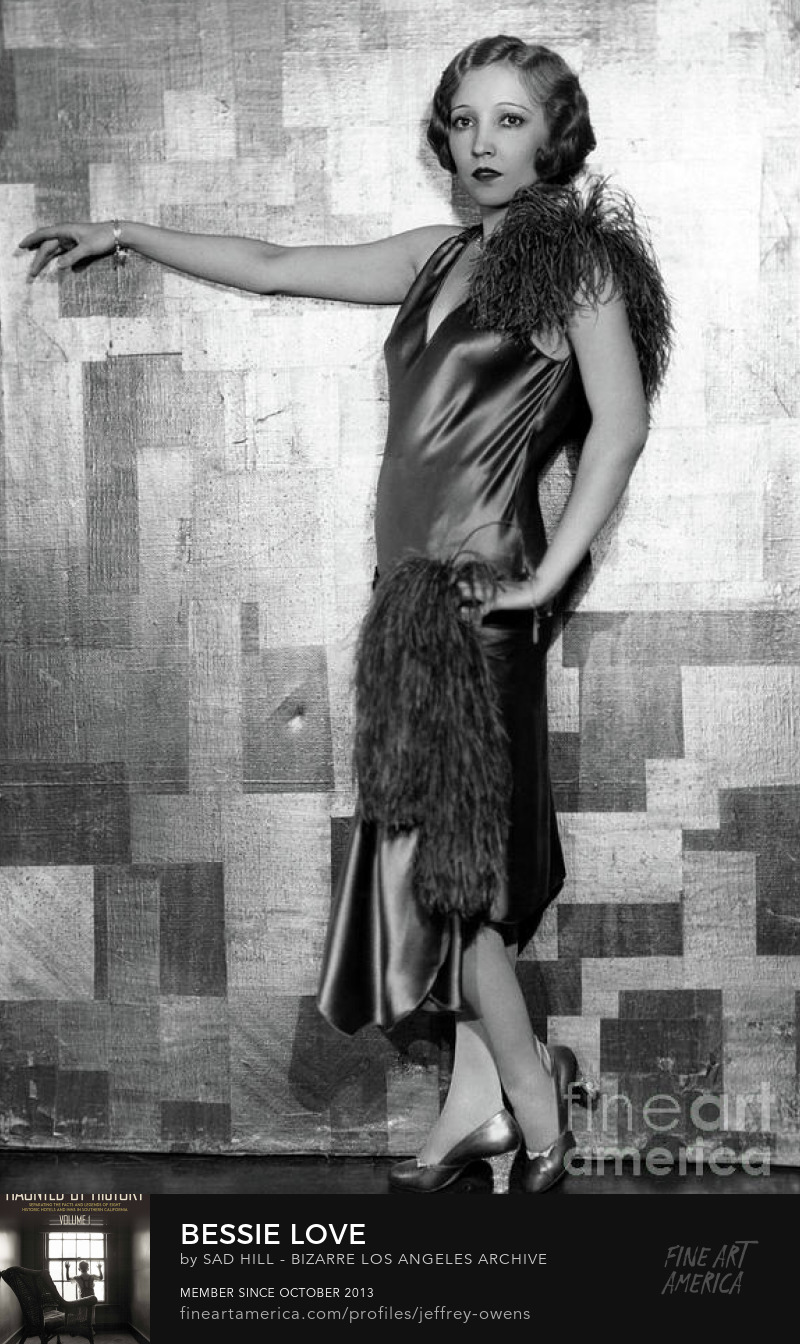 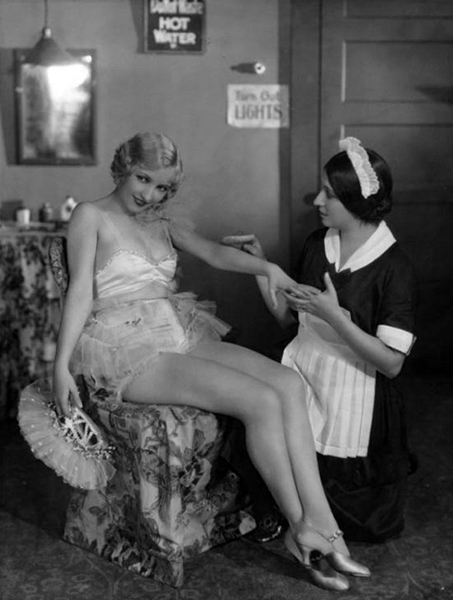 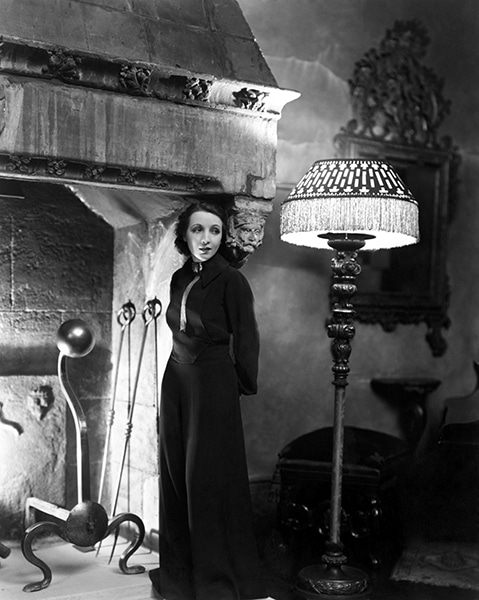 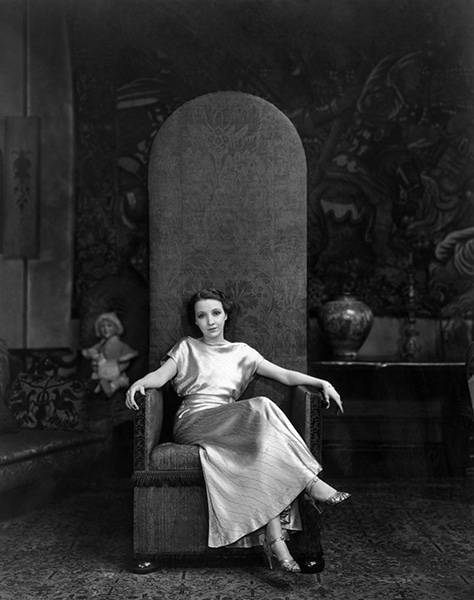 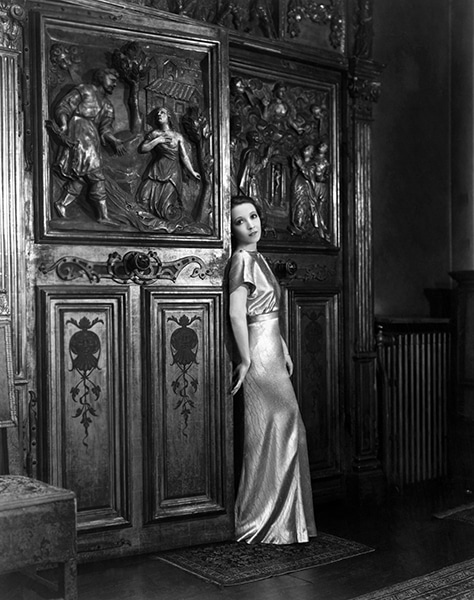 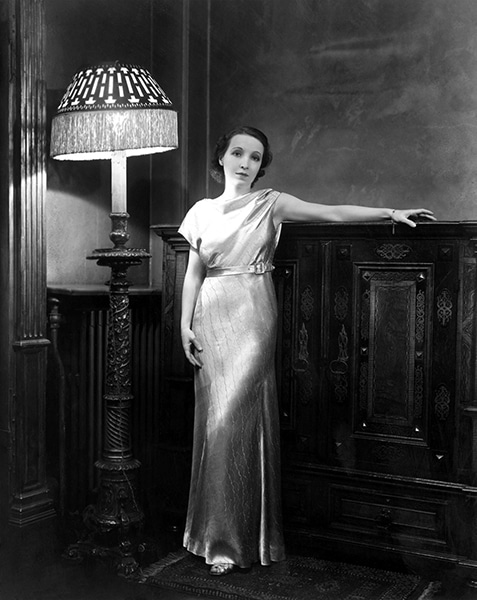 Posing insider in her London home in March 1936. At the time, she was starring in a stage show called Lucky Stars.