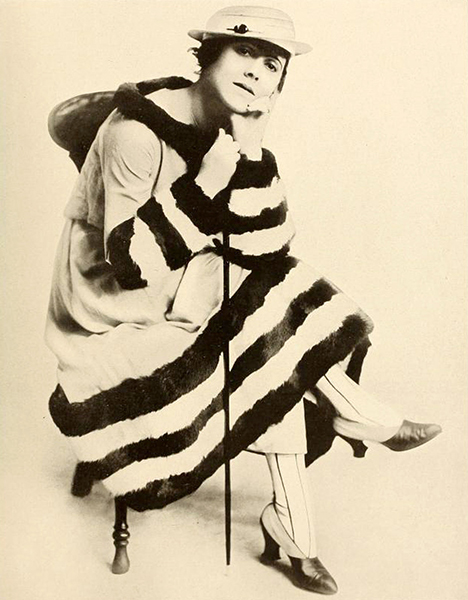 “You know the principal feature of comedy work is that it is so terribly serious.” — Fay Tincher 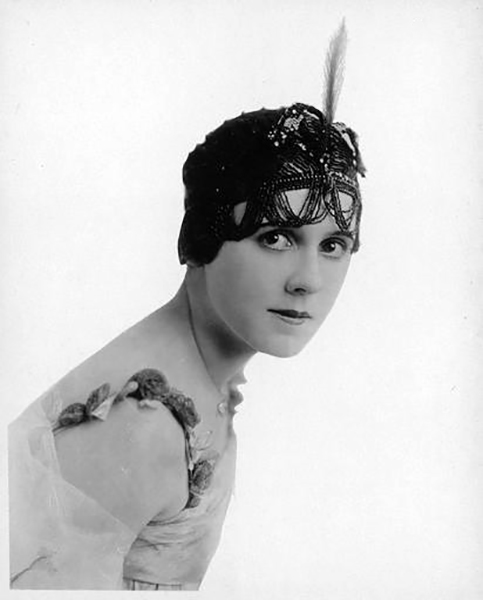 “Returning to New York, I was anxious to get on the stage again, and went to work on the Keith circuit playing the lead in Arthur Hopkins’ sketch, ‘The Dance Dream.’ For the next season, Mr. Hopkins was arranging a much more important part for me in a bigger production. I was to play a vampire part and I never was so excited in my life as when preparing for that work.” — Fay Tincher 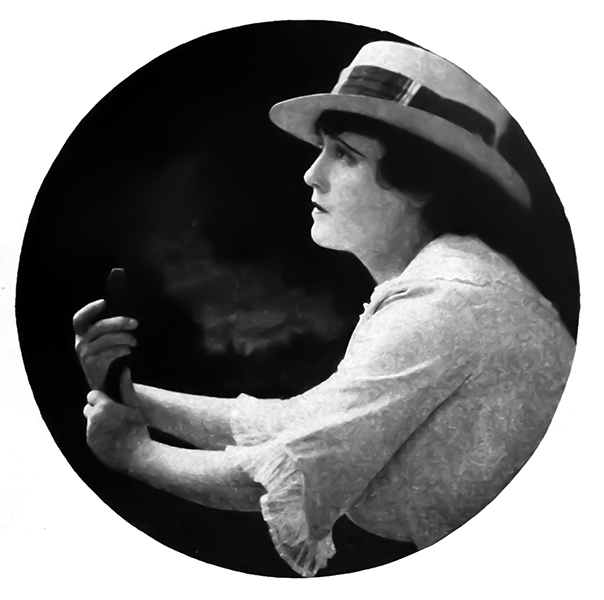 “One afternoon I went to the booking office with a friend while she arranged for time. That was two years ago, about the first of January [1914]. While I sat there, a man came in and began to stare at me. I said to myself, ‘Fay, you must be looking fit today’ and let him stare. Then he walked over to me and said: ‘Did you ever do any work in pictures?’ I hadn’t, so I said, ‘No.’ ‘Well,’ he said, ‘I wish you would come to the Studio and meet Mr. Griffith. I think you are just the type he is looking for.’ I wasn’t at all enthusiastic for I had my mind set on that vampire part, and I had never seen a moving picture, only as a glimpse in a vaudeville bill. I had never been to a regular film show. I went down next day and Mr. Griffith wasn’t there. But he told me by telephone next day to come at once. He asked to register different emotions. I tried. He kept looking at me with a sort of smile. Finally, he made a sarcastic remark and got me mad. I told him I didn’t care for moving picture work; that I hadn’t asked for a job; that he had invited me to call, and I didn’t purpose to be treated that way. In the midst of it, he jumped up and clapped his hands. ‘You’re the one I’ve been looking for,’ he said. ‘You’re just the type.’ So I got my job by getting mad. Of course, I understand why he did it now.” — Fay Tincher

Here is a slightly different version of her story printed in 1918:

“Well, I had been six months on the Keith circuit and a little while in musical comedy, when one day I was seated with a friend in a New York cafe. A strange man came up to me and said, ‘How would like to go into Moving Pictures?’ I replied, ‘I wouldn’t like it at all,’ and turned my back on him. I thought him very rude. He didn’t move off, but said, ‘You resemble Mabel Normand so much that you would be splendid on the screen, I feel sure.’ I never had been to a picture show, didn’t have the faintest idea who Mabel Normand might be, and consequently was not interested. Then he said, ‘I want Mr. Griffith to see you. I am sure he will consider you a splendid type for the pictures. Will you call at this address tomorrow morning?’ I took his card and thought no more of it that day, but next day curiosity had me nibbling at the latch-string of the Biograph studio. Mr. Griffith engaged me at once, had me play a vampire part – think of it – a vampire! At the end of three weeks, when the picture was finished, he put me into comedy, and there I’ve stuck ever since. I said to him once, ‘I don’t know whether I was simply rotten or a howling success as a vampire or why you switched me into comedy, but I do know that it suits my taste better.'” — Fay Tincher 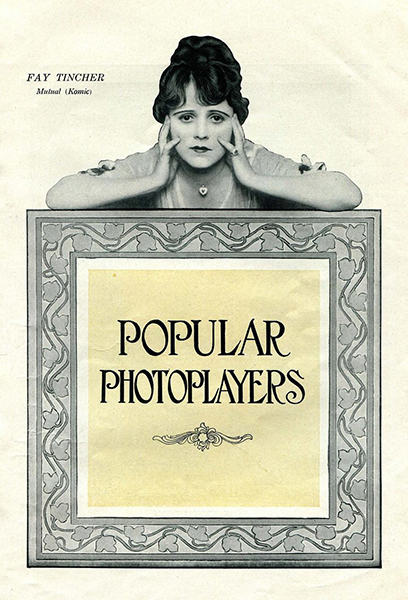 “Before I did real film work, I got my inspiration for the black and white color scheme, now that I think about it. We were sitting in a cafe one night, Mr. Griffith and quite a crowd of us. He was discussing how various types photograph. Suddenly he pointed at me and said: ‘Now take that type – Miss Tincher there – she is a distinct type, all black and white, black hair, black eyes, all the rest white. You can’t go wrong on such a face, for it’s only black and white. It won’t show shadows as the blonde type will.’ I didn’t think much about it at the time. My first picture was: ‘The Battle of the Sexes.’ In it were Lillian Gish, Mary Alden, Donald Crisp, and Bobby Harron. I played opposite Donald Crisp. It was after I came west with the company I started the black and white color scheme. I was the telephone girl in the ‘Ethel and Bill’ series. Mr. Griffith said I looked like Mabel Normand and could do the broad comedy. My part wasn’t very big and I wanted to make it stand out, so I thought, ‘How can I dress most effectively; and then I thought of what Mr. Griffith had said about the face ‘all black and white,’ and I had it. Then I designed and made all my dresses. Those were the days when we all could afford to make our own clothes. I tried to get a dash of style in each dress, but have it just askew. I still design all my clothes, but I have an awful time making the dressmakers think I am sane. I have stopped using all black and white. But I still use those two colors in every outfit.” — Fay Tincher

Again, here is a slightly different version of the same story published in 1918:

“Well, like everyone else, I had to do something different, something to make people remember my work. Really, it was Mr. Griffith who indirectly put the idea in my head. We were all chatting at the studio one day, and Mr. Griffith was explaining about some of the difficulties which confront the director and photographer. He continued, ‘Now with Fay there’s no problem at all. She’s just a plain black and white type, always photographs just as you see her, requires nothing but straight photography, and never is guilty of producing strange effects on the screen.’ That was my inspiration and I thought, ‘Why not be like the newspaper, black and white, and read all over?’ I tried out the effect and got so many letters of commendation for the eccentric outfits that I felt I had attained my objective.” — Fay Tincher 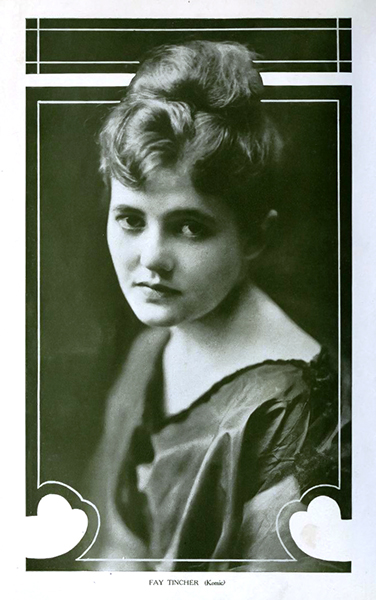 “We motion picture people all hang together, you know. We’re clannish, I’m afraid, but we almost have to be….our time is so largely taken up with our work that we don’t see much of outside people; so we have our good times with each other – a little dinner at the Alexandria Hotel, or perhaps a dance until midnight – no later – at Miss [Mae] Marsh’s home in Hollywood.” – silent film star Fay Tincher 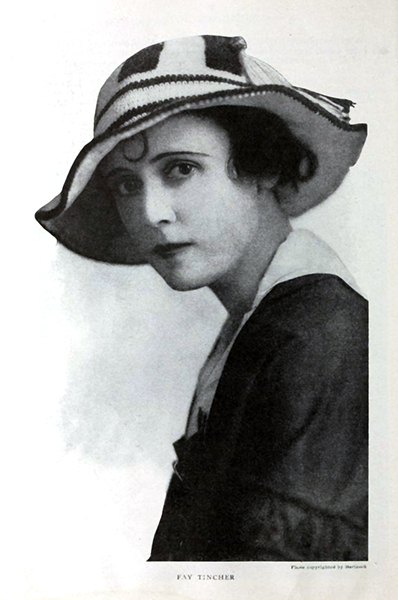 “Well, the most serious situation with me always is getting a laugh over – making my audience appreciate how funny I am. Yes, it is – honestly; and often it’s much harder work than it sounds, too. You see, I’m a comedy actress who takes her work seriously. Sounds strange, doesn’t it, considering what most Motion Picture comedy has been up to the present time. The truth is, that up to the last year or so comedy has never been handled seriously by either the producer or the public, and that is just the reason there has been so much cheap, vulgar, dime-novel comedy – slapstick, the managers call it. I could have done that sort of thing when I first began, and got big pay for it, too, but I won’t do it. I hate it. There’s no art in that sort of thing, and there’s nothing funny in it, either, for people with any brains.” — Fay Tincher 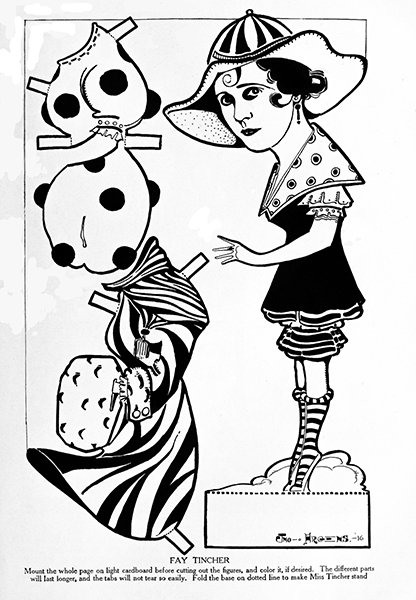 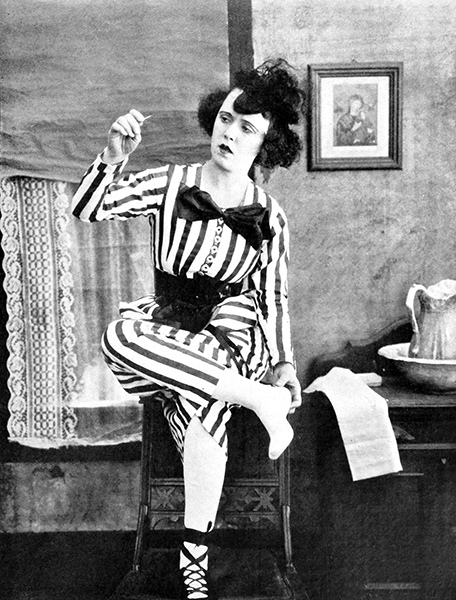 “I make every stitch I wear in the pictures, but nowadays I’m too busy to undertake my street clothes and lingerie, tho I just love to sew.” — Fay Tincher

“True comedy has to be spontaneous. It’s just in the situation itself – in the meaning of the situation. For example, there’s nothing funny about getting hit in the face with a pie, if there’s no reason for it. No, it’s the innocent person getting in wrong somewhere thru some blunder he isn’t conscious of, but which the audience knows all about, that makes a thing funny. And when the situation is right, the more natural and simple – even the more in earnest the actor is – why, the better he is – makes it all the funnier; don’t you see? All that’s necessary is for him to do the most natural thing under the circumstances. He doesn’t have to make a fool of himself to be funny.” — Fay Tincher

Clowning around with Douglas Fairbanks Sr. 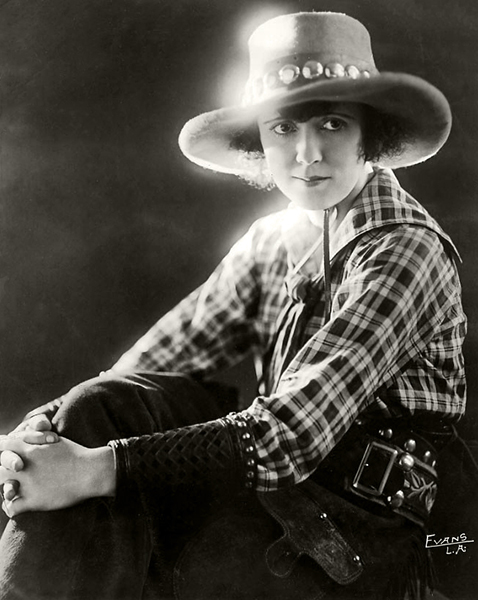 “I often plan my own situations and the more I study them the more I see that comedy on the screen will have to be taken seriously and raised to a much higher level than it has been so far, if it is to be permanent, and I’m glad of this chance to put myself on record as having said so.” — Fay Tincher

“While I was at the World [Film Company] offices one day, they told me my big comedies would be shown on Broadway, at the Rivoli or Strand probably, and I thought I looked very pleased. However, they said to me, ‘Why aren’t you just tickled to death to think your comedies will have a showing on Broadway? What more could a girl expect?’ I said, ‘Of course I’m awfully glad, but after all it’s the fans in the little towns and hamlets thru this country who are going to spell success or failure for me. It won’t make much difference if Broadway likes me and the small towns don’t think my comedies unique and worth going miles to see. It’s the little old reprints which put dollars into one’s pockets.’ And that is what I want – I’d like to please people everywhere, regardless of size of town or prominence of the theater.” — Fay Tincher

“I guess that’s it — greatness was thrust upon me, ahem! It must be in hiding, tho, for I’ve not discovered it yet. But this is my story of humble entrance into the movies. When I was in New York and people wanted to hear all about me, I said, ‘Now tell the truth about me, for I trust this isn’t to be my obituary. I don’t own a bungalow, I’ve never bought a car, I haven’t a poodle or K9 of any kind, and I didn’t run away from a rich home to become a screen idol. They all do that, don’t they? I mean run away from rich homes, at least so the press notices state. When I sift the matter down, however, it amounts to about the same thing in every case. ‘Tis the problem that drove me into the movies – I’ve got to eat!'” — Fay Tincher 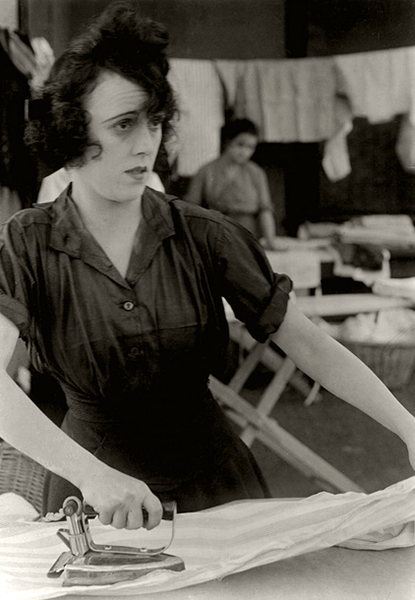 “Comedy-drama is growing in importance every day, and that is the thing I want so much to work into. I love it because it is so real and so human. People love it and need it – the real humor, I mean – clean, and sweet, and funny.” – Fay Tincher