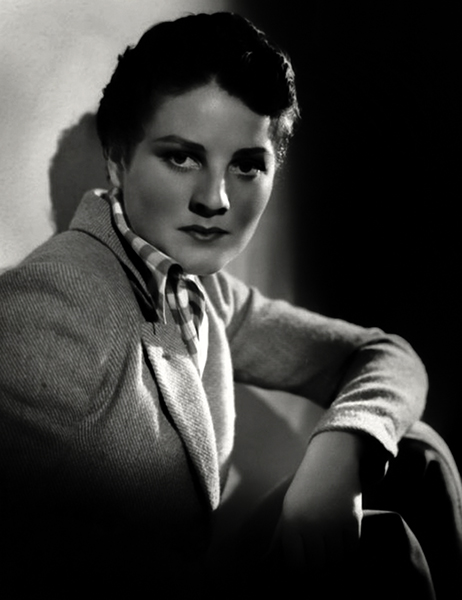 The following is a slight re-working of an obituary for Frances Rich written by Adam Bernstein of The Washington Post, published on October 26, 2007. All I did was take out the obituary feel, but I enjoyed this article for its biographical information. My changes will be marked with brackets ([ ])and ellipses (…). Bernstein’s work is italicized.:

Frances Rich, 97, [was] a one-time Hollywood actress who devoted much of her life to making sculptures of saints and celebrities…

…The daughter of movie, stage and radio actress Irene Rich, [Frances] appeared in secondary roles in minor screen dramas of the early 1930s before sculpting became her occupation.

One of her best-known works was a 10-foot-high statue made from Tennessee marble to commemorate nurses who died during military service. The statue, unveiled at Arlington National Cemetery in 1938, was dedicated to Army and Navy nurses but has since been considered a memorial to nurses in all service branches.

It has sometimes been called the “Spirit of Nursing” monument, said Arlington Cemetery historian Tom Sherlock.

Many of her religious statues showing saints graced churches and museums along the West Coast. She was not a Catholic – nor particularly religious – but developed a specialty in statues of Saint Francis of Assisi. Her Saint Francis statues earned her commissions from as far away as the American College of Greece in Athens.

She also designed a bronze statue called “The Laughing Pelican” (1958) located in front of the Pelican Building (now called Anthony Hall), which housed a student humor publication at the University of California at Berkeley.

In 1931, she graduated from Smith College in Northampton, Mass., and made her Broadway debut in the S.N. Behrman comedy “Brief Moment,” which starred Louis Calhern as a polo player.

She had small roles in films such as “Unholy Love,” “Zoo in Budapest” and John Ford’s “Pilgrimage” and co-starred with Rex Bell in the low-budget western “The Diamond Trail” (1933). Soon afterward, she turned down a studio contract and said she was determined to make a career in fine art.

Ms. Rich once told The Washington Post that an early mentor was sculptress Malvina Hoffman, “who liked some little soap models I’d done of the sets between scenes and rehearsals. It was almost immediately decided that I should go to Europe with her, a guide and friend such as few beginning sculptors have ever had.”

Starting in 1937, Ms. Rich attended the Cranbrook Academy of Art in Bloomfield Hills, Mich. The school was run under the direction of Swedish-born sculptor Carl Milles, a former student of Auguste Rodin’s.

At the start of World War II, Ms. Rich extensively studied mathematics and mechanical drawing and made technical illustrations for airplane production.

Afterward, she dedicated herself to sculpture and had several solo art exhibitions, including one in 1969 at the Palm Springs Desert Museum near her longtime studio. She spent many years in Santa Barbara, Calif., caring for her mother, who died at 96 in 1988.

[Rich died from a heart attack in Arizona at the age of 97].

Biographer William J. Mann in his book Kate: The Woman Who Was Hepburn, speculated that Frances Rich and Katharine Hepburn were lovers.