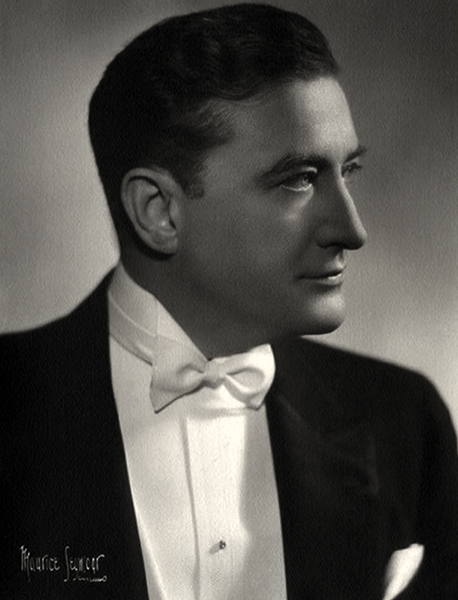 “The pioneers, the real showmen of the pictures, are all gone. Instead, we have only buttonhole makers and pants pressers. The attempts at economy have led them to place before a gullible public a crop of high school kids who have no idea of the art of acting.” – Francis X. Bushman in 1928. 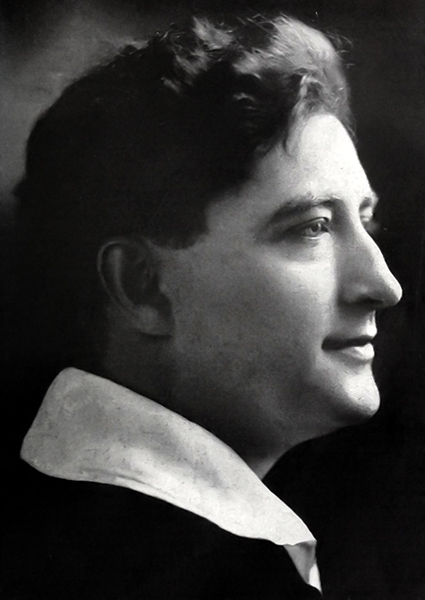 “So, I have the reputation of being ferocious! Funny how old ‘rep’ gets around. In fact, I’m the mildest of men. Besides, a man has a right to keep his body clean and sweet. You see, I’ve gotten beyond the period when a stage hug is charged up to physical exercise.” — Francis X. Bushman in 1912. 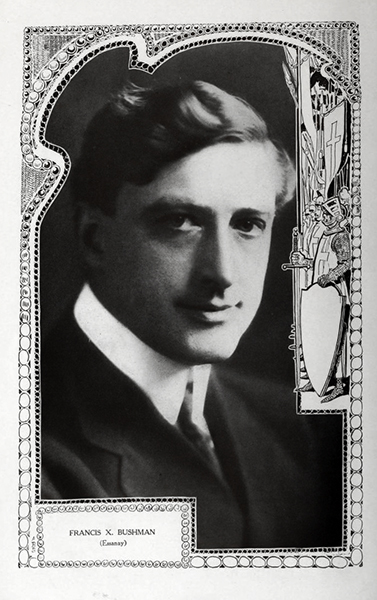 “My people have been Virginians for some 300 years, having come from England originally. I was born in Norfolk, Virginia, and educated at Amendale College, Maryland. My friends have always called me ‘Bush.’ and from an early age, I  showed a fondness for the stage. Yes, my experiences have been quite varied. I started doing boy parts with the old Albaugh Stock Company of Baltimore, and then successively – and, let me hope, successfully – with the Fawcett, Casino, Temple and Lyceum stock companies. Between times, I played on the road in the original ‘At Yale,’ ‘Moulin Rouge,’ and ‘Going Some’ productions, the latter under the Shuberts.” — Francis X. Bushman in 1912. 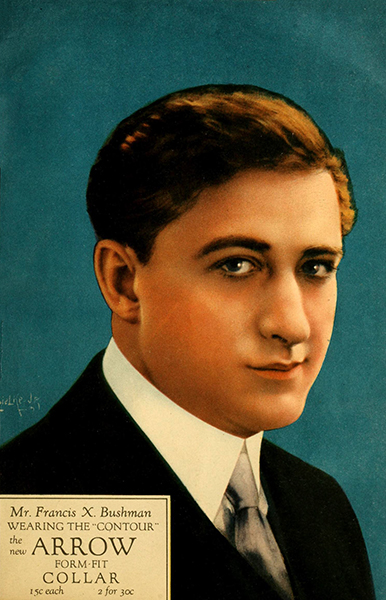 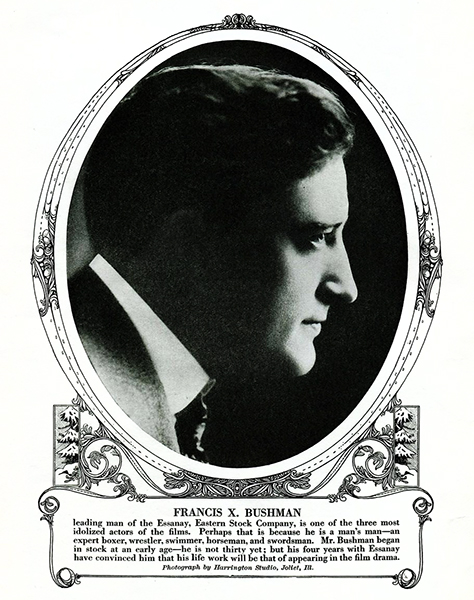 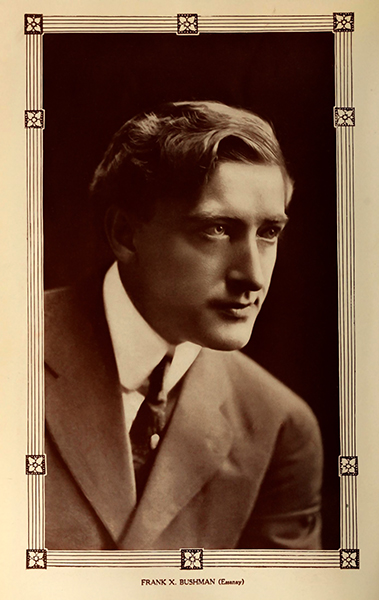 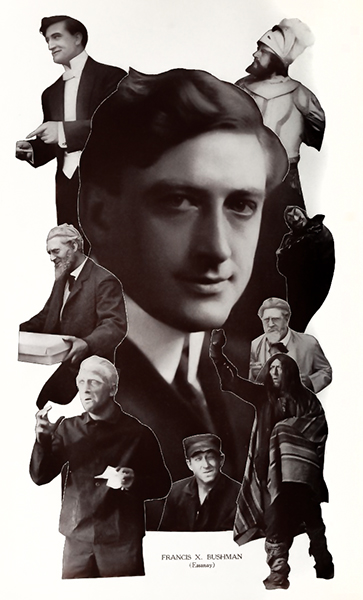 “As to my favorite parts, that’s rather a poser, seeing that I’ve played something like 150 of them. Generally speaking, I prefer character parts…If a lead is good, and strong, and sensible, of course, I like that, too.” — Francis X. Bushman in 1912 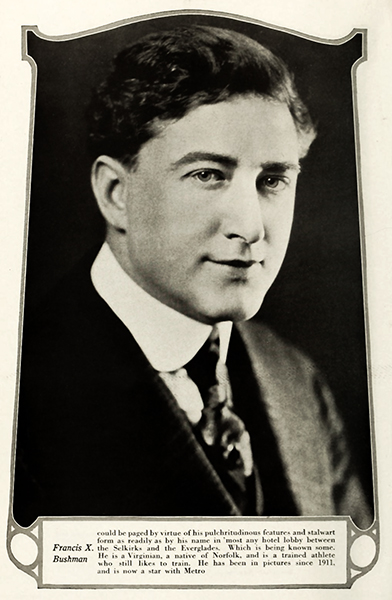 “Well, I’m five feet ten inches tall, weight 176 pounds and like all kinds of outdoor work and play, no matter where they are. In spite of my alleged man-eating habits, I spend a good bit of my time here at home, sometimes reading, sometimes studying up my parts. Oh, I read ‘most everything, with a liking, however, for the classics and philosophers. Poe, Keats and Byron, of the poets, are an inspiration for anyone.” — Francis X. Bushman in 1912. 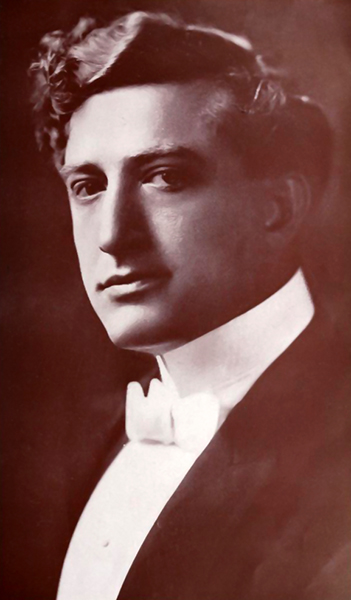 “In politics, I am a Democrat, can sing and play a little and attend the opera when I can. I must confess, too, that I miss the regular theater in some things. There is nothing in all the world like the murmur of many voices waiting on the other side of the curtain, the lights, the music, the laughter, the tears and the applause. Why, even the smell from the paint-frame is good.” — Francis X. Bushman in 1912. 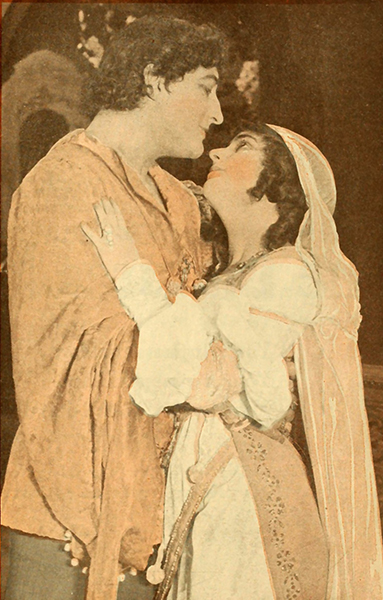 “Mr. Bushman was, and is one of the best friends of my life. We often laughed at the people who thought us lovers, but in the fact that no romantic sentiment ever sprang up between us lay, I think, the secret of our successful work. We planned together, we discussed every play, we thought alike. Acting with us was a matter of give and take; we were just a couple of partners in a business venture – art that’s successful is a business venture, isn’t it? – and we devised situations and business for each other, helped each other, in every way that we could. In that way, I want to say that Mr. Bushman helped me far, far more, I think, than I helped him. Mr. Bushman became my leading man before I had been so very long in the studio, and so you see I sort of ‘grew up’ in his plays!” — Beverly Bayne 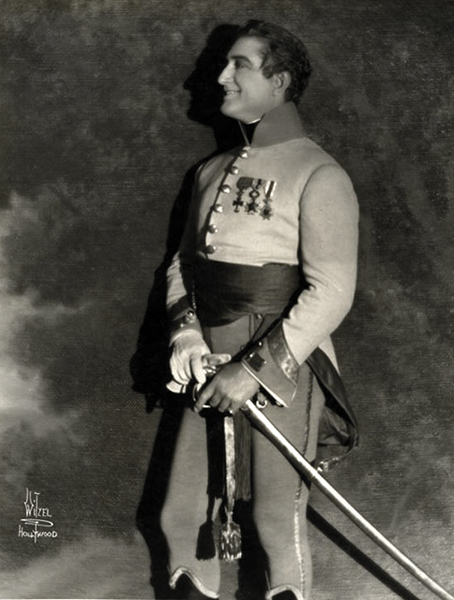 “Mainly, it’s the loss of glamour that gives me pause. The lives of the stars on TV — and in the movies, too — are too open. We know how they live, what they eat for dinner; the mystery is gone. And when mystery goes, glamour goes with it.” — Francis X. Bushman

The quote appeared in Donald Freeman’s column in the San Diego Union on November 13, 1957.