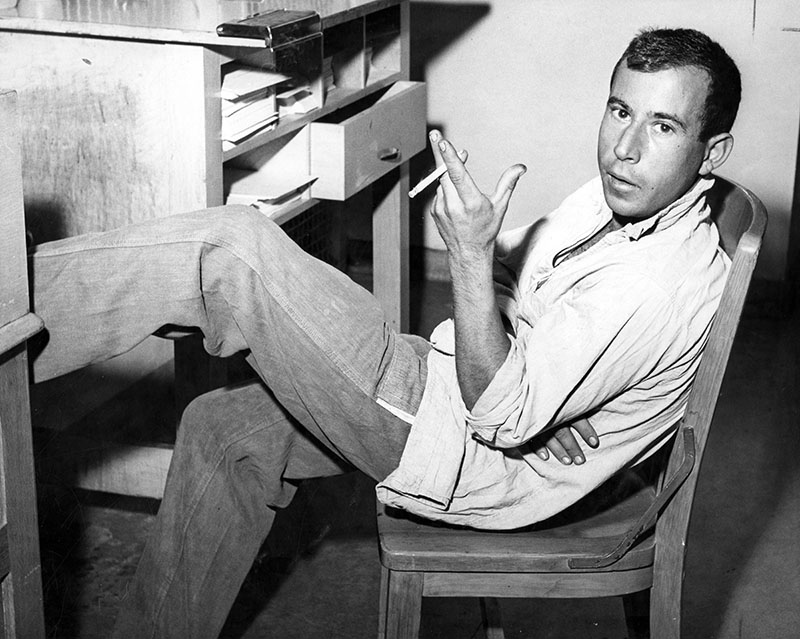 Scheuer, who worked for a Lockheed Martin factory in Burbank, was trying to solve a crossword puzzle at her kitchen table when Bud suddenly attacked her from behind. After receiving 11 stab wounds, she stumbled out of her apartment and called out to her landlord, Forbes Exter, who lived at 11734.

“Help me! Bud just stabbed me and now he’s going to kill himself!”

Exter immediately took Scheuer inside his house and called the police shortly after 7:30 p.m. 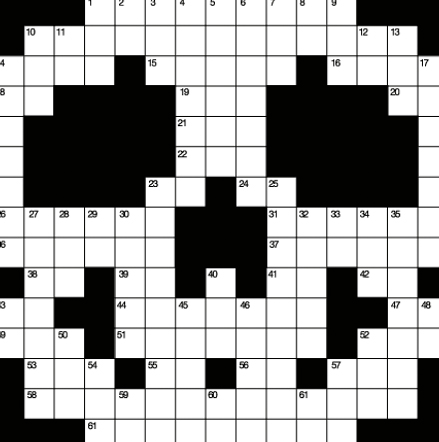 When officers arrived, they found Bud sitting on the front lawn. He told them, “I stabbed my mother. She’s in that house. I wasn’t mad or anything. I’m just no good.”

Paramedics rushed Scheuer to the hospital where she was pronounced dead around 8:42 p.m. (Note: some newspapers claimed that she was dead on arrival). Police officers then charged Bud with suspicion of murder.

At the North Hollywood Police Station, Bud Thompson Jr. told police that he had carefully planned his mother’s murder so that she didn’t have to work so hard to take care of him. He told Detective Sergeant Dan E. Bowser:

“I went down to a nursery and bought the ice pick today. I’ve been drinking quite a bit of vodka and I’m drunk.

“She was sitting in the kitchen working a crossword puzzle when I grabbed her and put a rag over her face and just started stabbing all over.

“I wanted to put her out of her misery. I’m no good to anybody and neither is she. I’m just a drunk.”

Bud also told detectives that he he had tried to murder his mother with a butcher knife the month before, but that a neighbor had wrestled the knife away from him.

Police also learned that Scheuer was a former newspaper writer and the ex-wife of former screenwriter turned best-selling author Morton Thompson. Scheuer and Thompson Sr. met while working together at the Hollywood Citizen-News in the early 1930s.  The couple married and had two children, Milllicent and Bud, before divorcing in 1942. Afterwards, Thompson Sr. moved east, married his New York literary agent, and wrote the best-selling novel Not As a Stranger.

Thompson Sr. didn’t live long enough to see his novel adapted for the big screen. He died of a heart attack on July 7, 1953. Eleven days later, his second wife committed suicide. (How’s that for strange?) 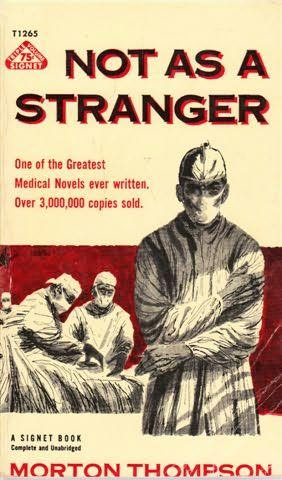 Bud and his sister Millicent grew up in North Hollywood. Records suggest that Bud joined the Navy in 1954 and was released the following year. He then became as a ne’er-do-well who couldn’t hold a job. This led to friction between mother and son that was well-known to their landlord and neighbors.

In court, Bud Thompson pleaded not guilty by reason of insanity. However, after psychiatrists ruled that he was sane, he pleaded guilty and was sentenced to life in prison.