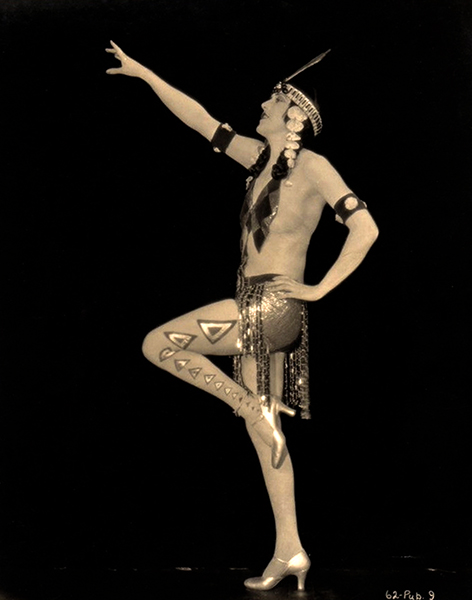 “There’s no easy road to any success. But the myriads of film-struck maids see only the height we’ve reached. They never peer back over the trail we’ve traveled.” – Ruth Roland 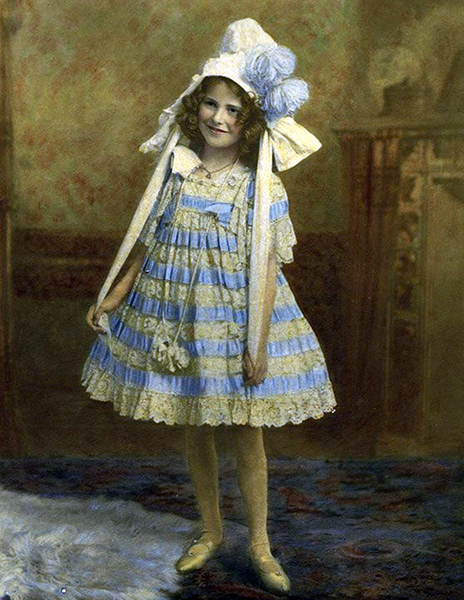 “Why, I have done a million things since the old days. I worked with ever so many companies, and when mother was leading lady and there wasn’t any part for me in the show I used to sing and dance between the acts. My! I was so happy. Then came our trip to Honolulu. I was the first little girl ever to play over there, and they surely were wonderfully nice to me. We stayed in Honolulu six months, but we had been in ‘Frisco only a short while when mother died, and it just seemed for a time I never would get over it, but since I’ve grown up I have learnt to bear it better. But I miss her more than anything on earth.” — Ruth Roland 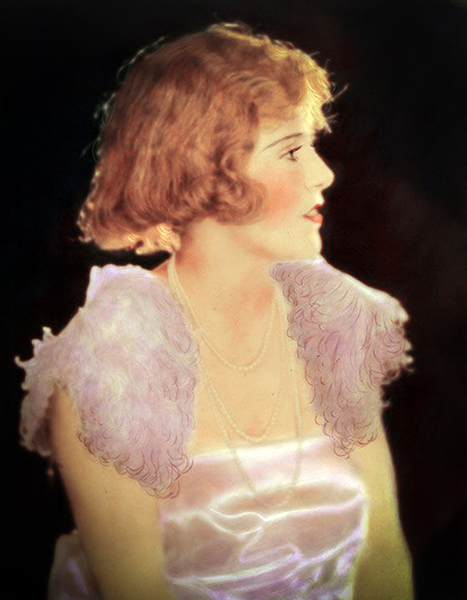 “I then lived with Auntie…I used to help Auntie do all of the million little things it takes to keep a healthy, vivacious girl in clothes. I really went to school during that time. Say, I sure was happy at school. But you know me! I have always been a tomboy – I just love to ride and swim better than anything. Well, I went in vaudeville for several seasons, both big and small time, sang and danced; played in Morosco Stock, also for Belasco in ‘Frisco; had lots of the hardest bumps anyone on earth can get; but just look how well I have prospered by it. Then came a visit one day to the Kalem studio. Mr. Hartigan was then director. Just by chance I tried out for the position of leading woman – well, you know the rest.” — Ruth Roland 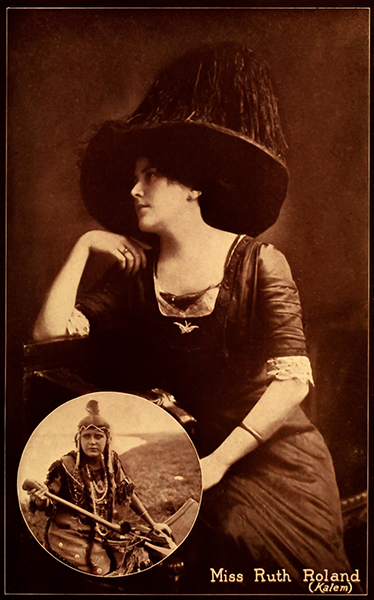 “I’ve been two years with Lubin Co., but that’s not all I’ve done, oh no. I’ve been upon the speaking stage since I was just four years of age. I’ve toured the globe from A to Z, but photoplay’s the place for me!” — Ruth Roland in 1913 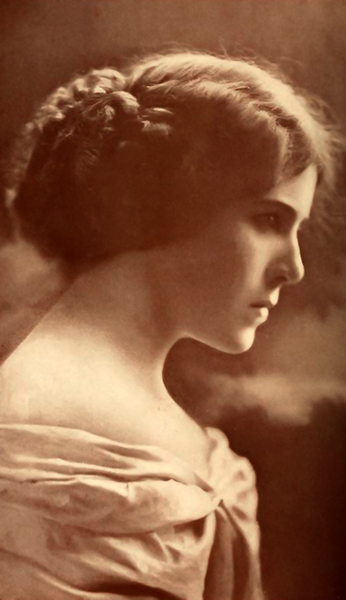 “No use my acting in a play that’s sad and staid in any way. I’d spoil it with my fatal smile, but comedy is just my style. I love to do boy parts and play with Johnny Brennan every day. No, no, I’m not a suffragette. I think the men can run things yet! Maybe I’ll want the ballot when we have to stop running the men. But wearing pants and other things – ahem!” — Ruth Roland in 1913 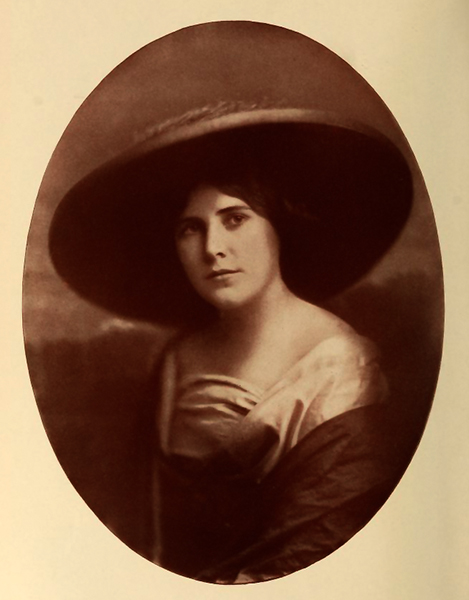 “I’ve played two hundred parts, or so. My hobby? Well, I like to know people like my work and me; it’s fine to make folks laugh, you see.” — Ruth Roland in 1913 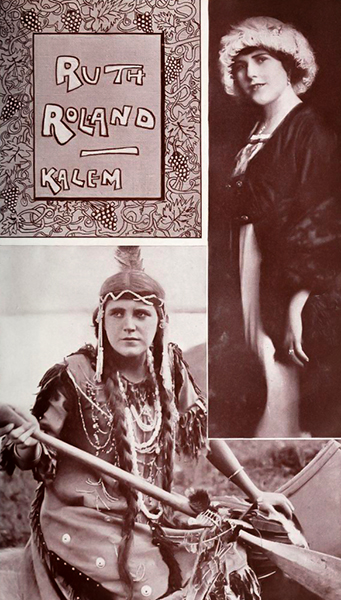 “I’m black and blue, bit I think swimming is the best of all the sports on the sea or shore – there’s not one that delights me more. Then I can shoot a little bit – once in a while I make a hit. Last week, I chased an antelope on horseback over plain and slope. My horse was going at fill speed. I took good aim and drew a bead upon the swiftly moving game, pulled the trigger, and down it came!” — Ruth Roland in 1913 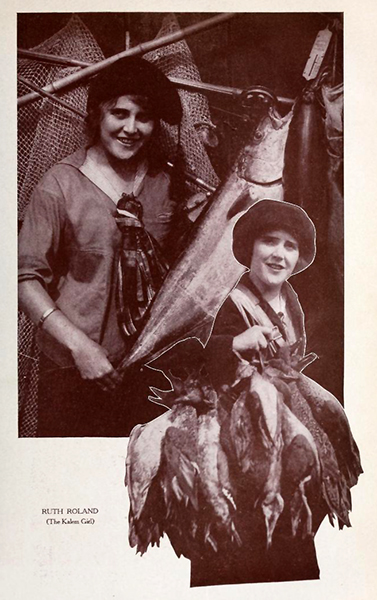 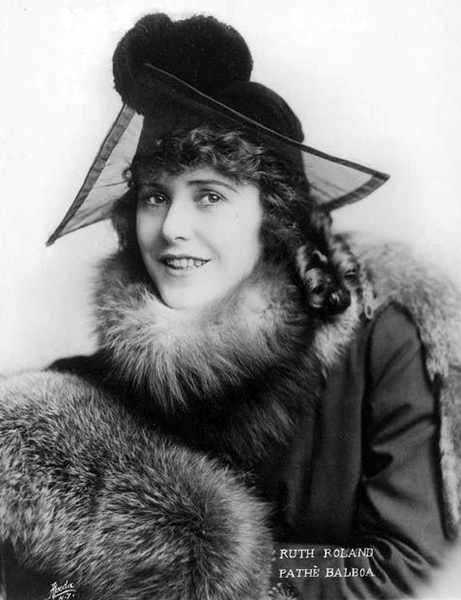 “I do love to make people laugh. We have the hardest time in life, anyway, at best; so why not smile all the time we can? Yes, indeed, and I am an optimist of the first degree.” — Ruth Roland 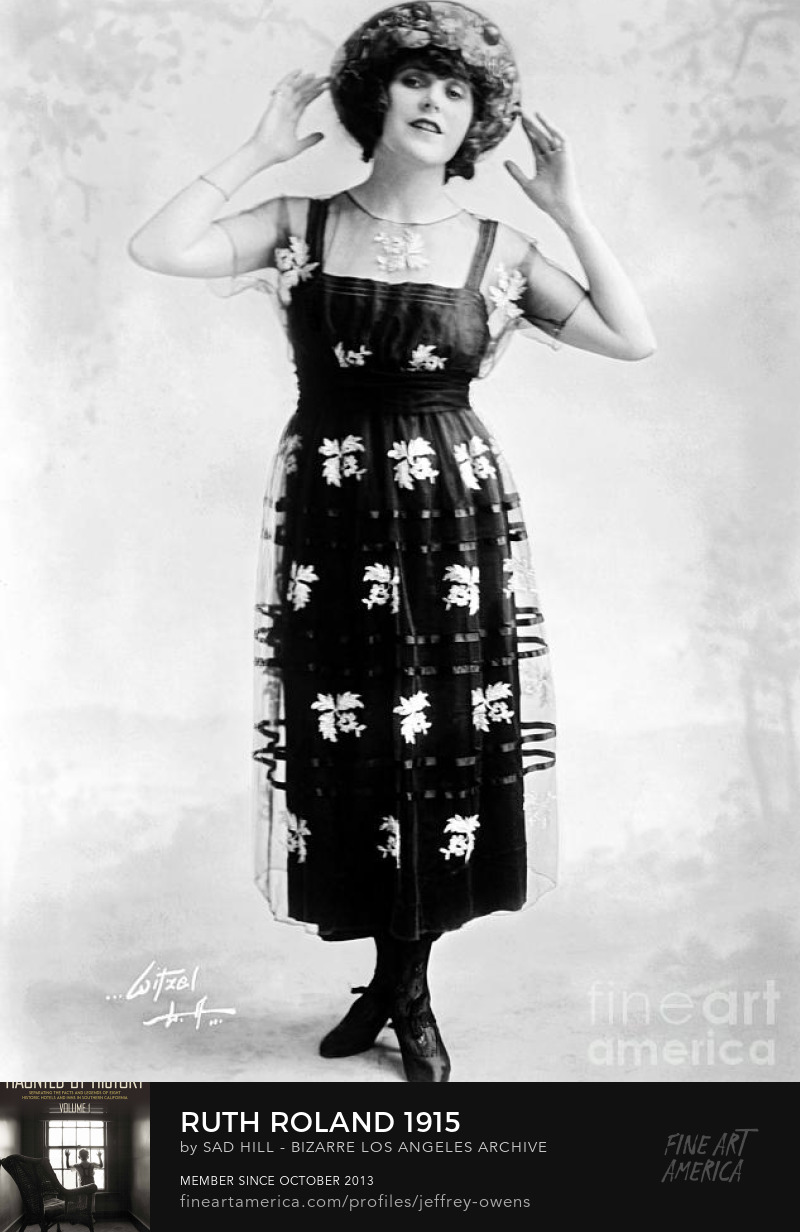 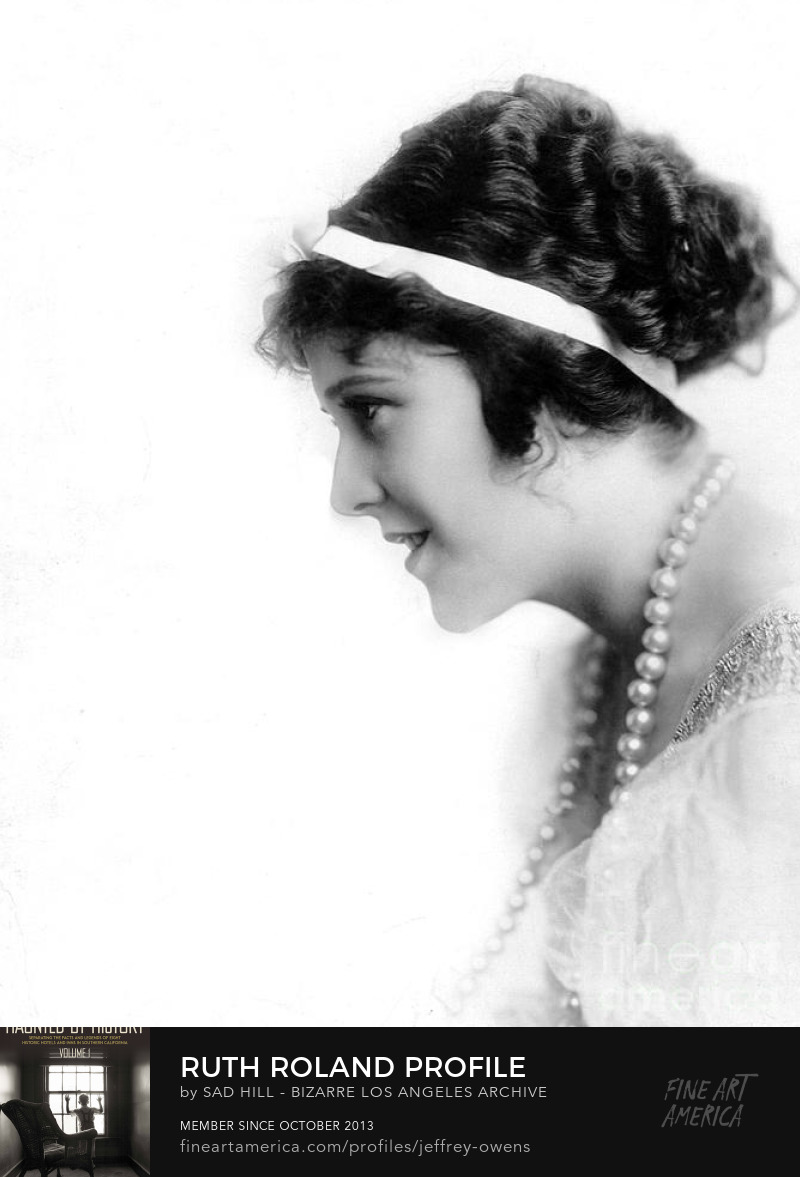 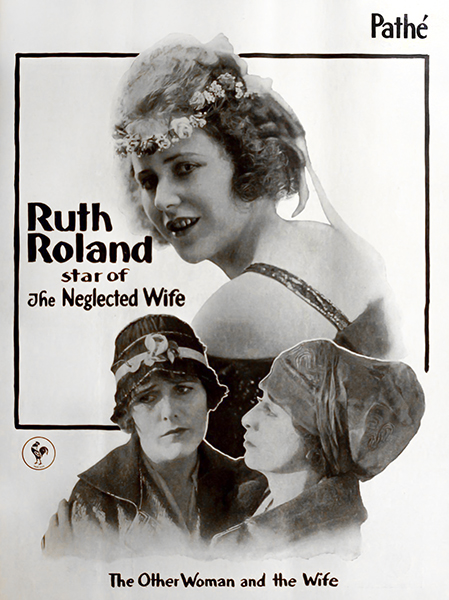 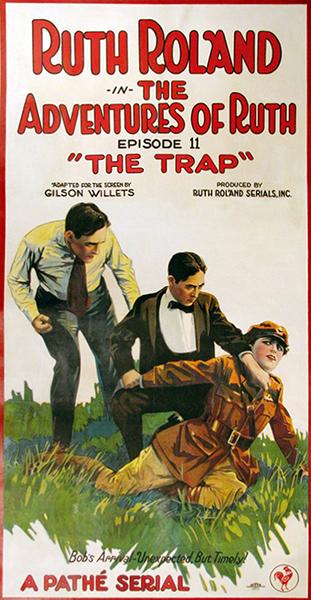 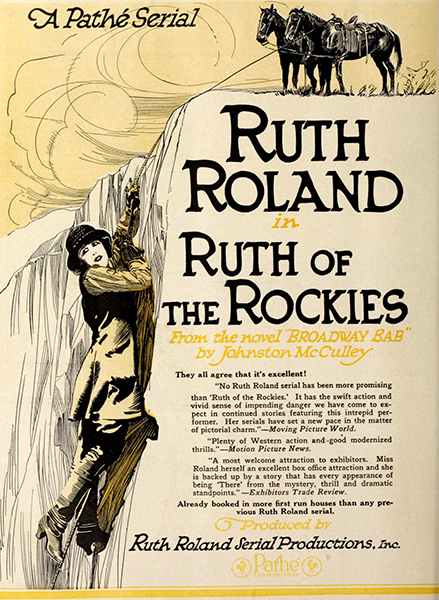 In 1923, movie serial action queen Ruth Roland purchased 61 acres along Wilshire Blvd. and Vermont Ave. (west of the Ambassador Hotel), which she named Roland Square. She then temporarily lived in a gray two-story house at 3828 Wilshire Blvd. from 1924 to around 1928.

After buying Roland Square, she built a Tudor style real estate office with a large electric sign. (Note: Street sign suggests that it was located on the corner of Wilshire and Fairfax.) Roland‘s real estate company then subdivided and immediately sold most of the land for a large profit in 1923. In fact, she boasted that her square was mostly sold out before she placed lots on the market. One of her early clients was screen comedian Billy Bevan, who bought two large city blocks along Wilshire. Her agents also bought land from her.

“I have always adored Los Angeles,” Roland told the Los Angeles Times in 1931, “and felt it could do no wrong. That it would grow and prosper. Nothing could have swayed my confidence in its future.”

In 1927, Roland was touted as the wealthiest woman in motion pictures, worth between $5 and $10 million. She was not averse to holding onto property until she could sell it for outrageous prices. Because she was still a big star, Roland admitted that she rarely visited her real estate office, which housed three employees.

After her film career ended in the 1930s, she continued to successfully invest in real estate until her death in 1937 from cancer. 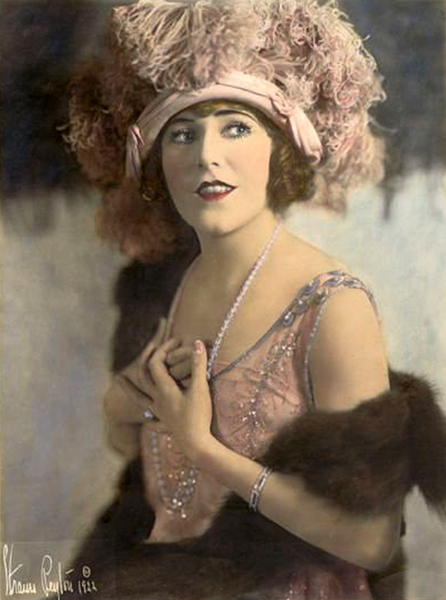 “Roughly, it costs me fifty thousand dollars a year to be a star. This figure is the necessary expenditure for my personal life and does not include the production of my films. It is apportioned to cover: upkeep of home and cars, one thousand dollars a month; clothes, minimum of fifteen thousand dollars annually; fan mail and photographs, fifteen hundred dollars a month; publicity, press agent’s and secretary’s salaries, five thousand a year. These are minimum figures. Usually my expenses run over the amounts given.” — Ruth Roland in 1925. 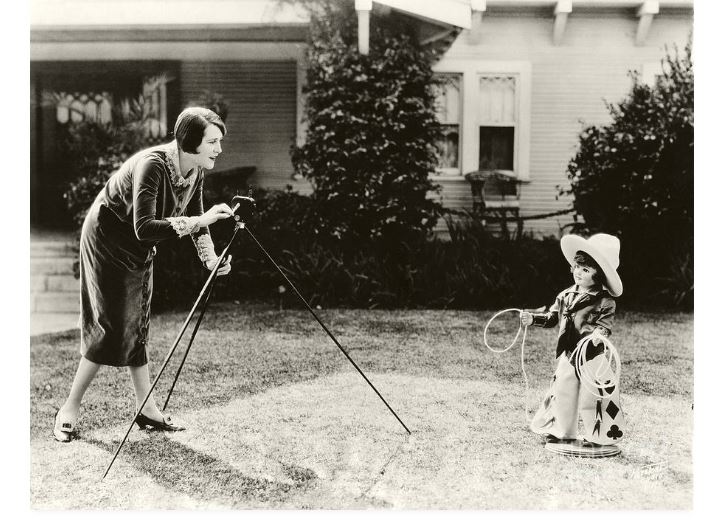 Roland films a doll with a Pathex miniature motion picture camera in 1925. The doll is dressed as one of her past screen characters. 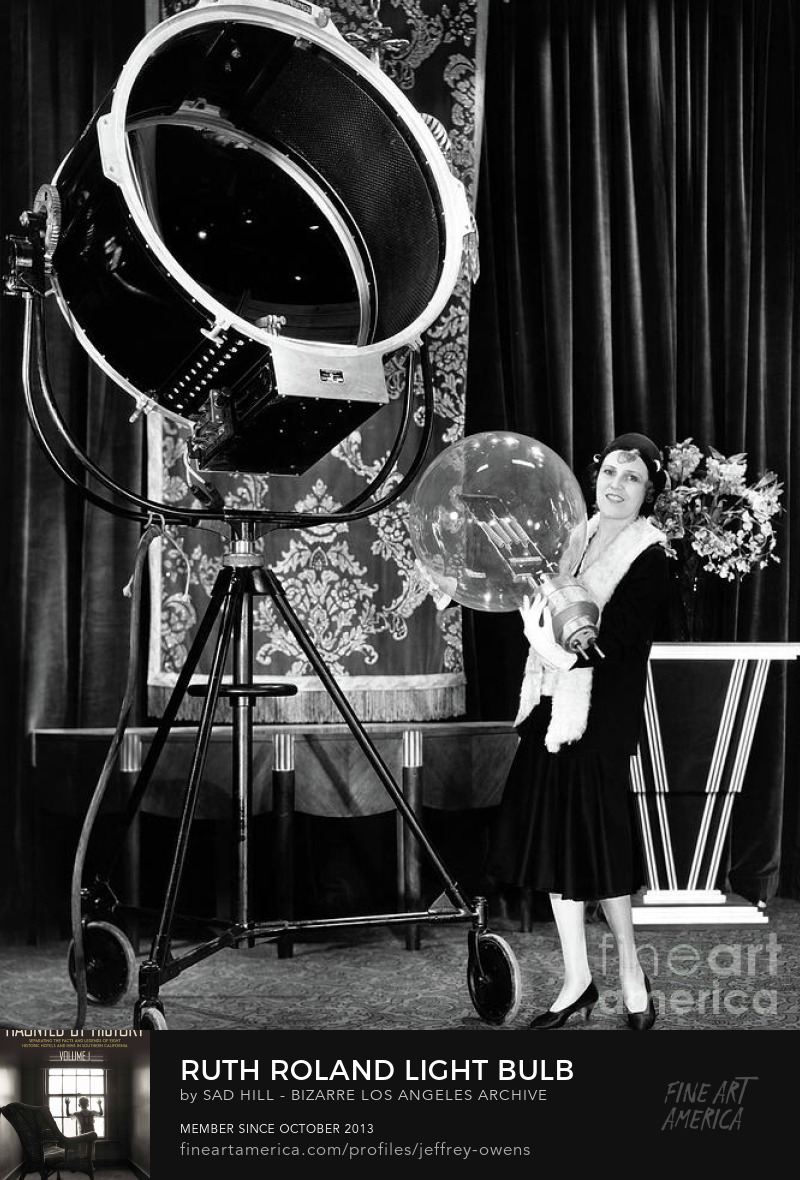