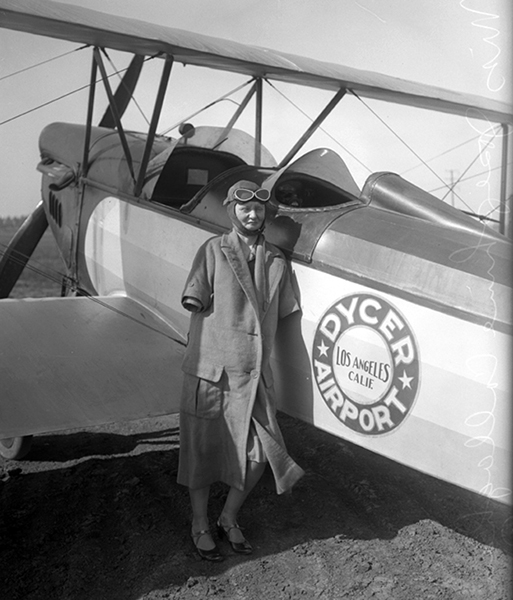 ABILENE, Tex., September 28, 1929 (UP) – Death wrote the last entry in the aerial logbook of Miss Josephine Callaghan, who distinguished herself as an aviatrix despite the fact she was born with clumsy stumps instead of arms.

Her body was here today awaiting removal to California where relatives live. When it was lifted from the twisted cockpit of her airplane yesterday, after it plunged from 2,000 feet to a cotton field near here, a logbook and a letter fell from a pocket of her flying suit.

The letter told of the girl flier’s determined struggle to obtain a pilot’s license. The log detailed progress of her flight from Los Angeles to Washington, D.C., where she intended to prove to authorities she was qualified to fly despite her physical handicap. It indicated she had spent Thursday night at El Paso, Tex.

Derry Berry, manager of the Abilene airport, witnessed the crash and said he believed Miss Callaghan lost consciousness or that the controls of her airplane froze. Her body was removed with difficulty from the cockpit in which the controls were specially fitted to be operated by the girl’s half-arms.

Berry found the logbook and letter.

It was learned through relatives that Miss Callaghan made her first solo flight in August 1928, at the Dycer airport at Los Angeles, where she was graduated from a flying school with the praise of her instructors.

Callaghan was a 40-year-old wealthy ranch owner and sportsperson that lived in Encino. Her father had been a San Francisco stockbroker who had made a fortune. Once she decided to take up aviation, she sold most of her livestock and bought a Lincoln Page bi-plane “equipped with a stick extending shoulder high. At the top of the stick is a padded forked rod and in this Miss Callaghan inserts one of her shortened arms.”

Apparently, her seat was also raised and the foot rudder was moved up and back. Switches and throttles were also rearranged so that she could control them with her stumps. (Source: L.A. Times)

Callaghan was certainly an overachiever, telling the Times: “Why I can pilot that plane easier than I can drive an automobile and look at the time I save. Also, it’s the greatest thrill in the world and I ought to know because I’ve been riding my jumpers in horse shows for several years and have driven all makes of automobiles.”

Ironically, at the time of her crash, she was attempting to fly to Washington D.C. to convince the Department of Commerce that she deserved a private pilot license despite her handicap.