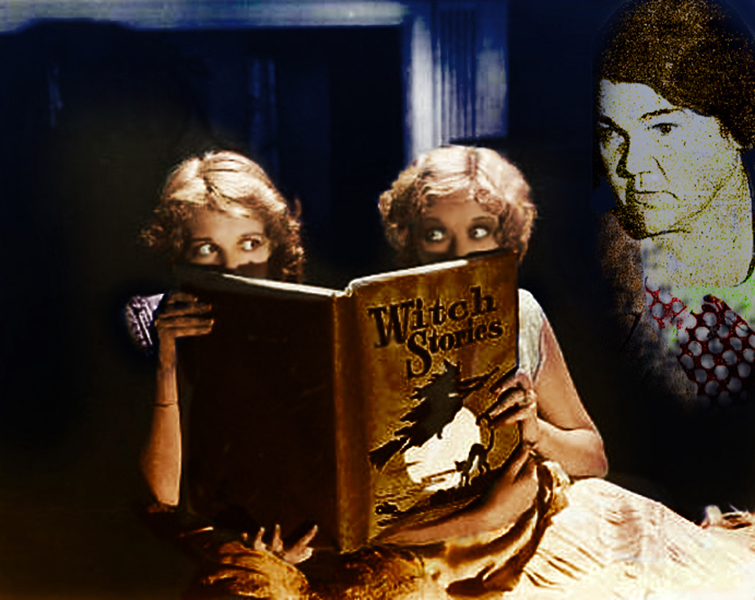 Newsflash from the Past: No Trace Found of ‘Witch-Woman’

LOS ANGELES, November 15, 1929 — (UP) — Police said today that had no trace of the so-called “witch woman,” hunted for beating 4-year-old Tommy Hetherington last Wednesday after luring the boy from his mother’s parked automobile.

Several suspects have been taken into custody, it was said, but were released when they established identity.

Eleven children in Los Angeles have been spanked by a mysterious woman during the last nine months.

On Wednesday, November 13, 1929, a mysterious woman abducted four-year-old Tommy Hetherington from his mother’s car at the corner of Fifty-first street and Broadway. She then took him behind a neighboring house, pulled down his pants and whipped him, using her hand. Afterwards, the woman promised to buy him candy for being a good boy if he followed her to South Park. He complied and she led him inside a park restroom, pulled down his pants a second time and whipped him with a switch she had snatched from a bush. Afterwards, a traumatized Hetherington mysteriously appeared alone at his aunt’s house on East Forty-ninth Street.

Hetherington’s parents called the police, who investigated the crime. An off duty police Officer named Quivanen admitted that he had seen the mystery woman leading Hetherington behind a house close to where he lived. He also told detectives that he thought the woman and child were friends of his neighbor and that the woman was not behaving in a suspicious manner.

Earlier that year, on January 16, 1929, three-year-old Bobby Henry was taken from a department store on Broadway by a “gray-haired woman wearing glasses.” The beaten child was later found in an empty house located at 1128 Manhattan Place. A police investigation at the location found pieces of a glass lens on the floor and were convinced that the child had kicked the abductor in the face.

An investigation into the Henry beating led police detectives to question 49-year-old Mrs. May Lake, who had wandered into an “optical shop” with a black eye and a broken pair of seeing glasses. Mrs. Lake convinced detectives that she was not in the vicinity of the incident at the time of the attack.

Then on November 15, 1929, two days after Hetherton was attacked, the Witch-Woman struck again. Dressed as “an elderly woman,” she had stepped out of a “shabby automobile” to grab six-year-old Dick Catlin, who was standing alone on Fifty-fourth Street between 6th and 7th. The boy evaded the abduction by striking the woman on the hand with a rock he had been carrying. Two seven-year-old children, Frances Keeler and Bobbie Perrick, told detectives that they had witnessed the incident.

Immediately following the incident, a detective visited Mrs. May Lake and discovered a scratch on her arm. Even though Mrs. Lake claimed that the scratch was from a recent fall, the detective arrested her for child abduction and assault.

The police brought six victims and their parents to the police station. Mrs. Lake and four other women, all wearing prison denims, were then marched into a room and lined up. None of the children identified Lake (or the others) as the Witch-Woman. During the procedure, a woman identified as Mrs. Sally Hanson called the police station to report that a strange woman had “tormented” her child in Pershing Square while she had gone shopping. Detectives went to the park but could not find any trace of the culprit. Detectives soon dropped Mrs. Lake as a suspect and released her from custody.

On August 12, 1930, the Witch-Woman showed up at the Southern Pacific Station in downtown Los Angeles. While there, she singled out 10-year-old Virginia Lee Huffman, who had just arrived in Los Angeles with dreams of breaking into motion pictures. After Huffman’s mother had left her daughter in the waiting room to make a phone call, witnesses saw a “mannish-appearing woman” sit next to Huffman. The woman then began to slap and kick the child, who screamed for help. While many witnesses assumed that the Witch-Woman was Huffman’s mother punishing her child, a man “angered by the brutality of the whipping” intervened. The Witch-Woman turned and attacked him, too, before running out of the train station. One newspaper article claimed that the Witch-Woman had screamed out, “Red Top, come and kill this child!” before fleeing.

A few days later, on June 22, 1933, nine-year-old Marcelle Blynne was walking home from school during the lunch hour when the “Witch-Woman” appeared and said, “Come here, honey, and I’ll buy you some candy.” Marcelle ran to her house on 4th Street, entered and locked the screen door. Marcelle told police that the Witch-Woman flashed a toothless grin before hurrying away.

A new police description of the Witch-Woman was released: “American, 50 years of age, 5 feet in height, brown sunken eyes, no front teeth, wearing glasses, a blue dress with white apron and a hat tied under the chin with a white ribbon.”

On March 1, 1934, the Witch-Woman approached six-year-old Arthur Miller after the boy had stopped at a grocery store on his way home from school. She told him that his mother had died in a car accident and that he needed to follow her. The Witch-Woman then led Miller to the home of W.L. Donaldson (442 E. 43rd Street), where she rang the doorbell. When she was satisfied that no one was home, she quickly turned and began striking the child in the face and body with a stick she had been carrying.

After the child had fallen into a semi-conscious state, the Witch-Woman ripped the pillow case from a porch chair and started to choke him as she sat on top of him.

Around this time, the Donaldson’s car pulled into the driveway. As Mr. and Mrs. Donaldson approached the front porch, they startled the Witch-Woman, who quickly fled through bushes into a neighbor’s yard.

The police were immediately called and a crowd soon gathered around the unconscious child. With police sirens wailing, the Donaldsons spotted the Witch-Woman “lurking” around the edge of the yard and called out to the police to apprehend her. Officers then arrested Betty Kocalis, a 37-year-old mother of six children, who lived at 4241 South Olive Street, on suspicion of kidnapping, child stealing, and assault with intent to do bodily harm.

At the police station, Kocalis became violent and started babbling incoherently as detectives readied her for an identification test. Moments later, the Donaldsons and Arthur Miller singled her out in a police lineup. Kocalis proclaimed her innocence by telling officers that her own six-year-old daughter, Betty Jane, had been beaten by the Witch-Woman a few year ago.

Detectives checked into her story and discovered that they had, in fact, investigated the incident. According to their report, Betty Jane had been dragged into an alley and beaten by a mysterious woman described as being 50 years old, 185 pounds with wrinkled skin and gray hair.

District Attorneys were not convinced that Kocalis was innocent, and on March 24, 1934, her trial began with her husband and six children in attendance.

Virginia Wilholte, Jack Fosterling and Arthur Miller testified that Kocalis was indeed the Witch-Woman. In fact, Fosterling had been beaten near Kocalis’ home. 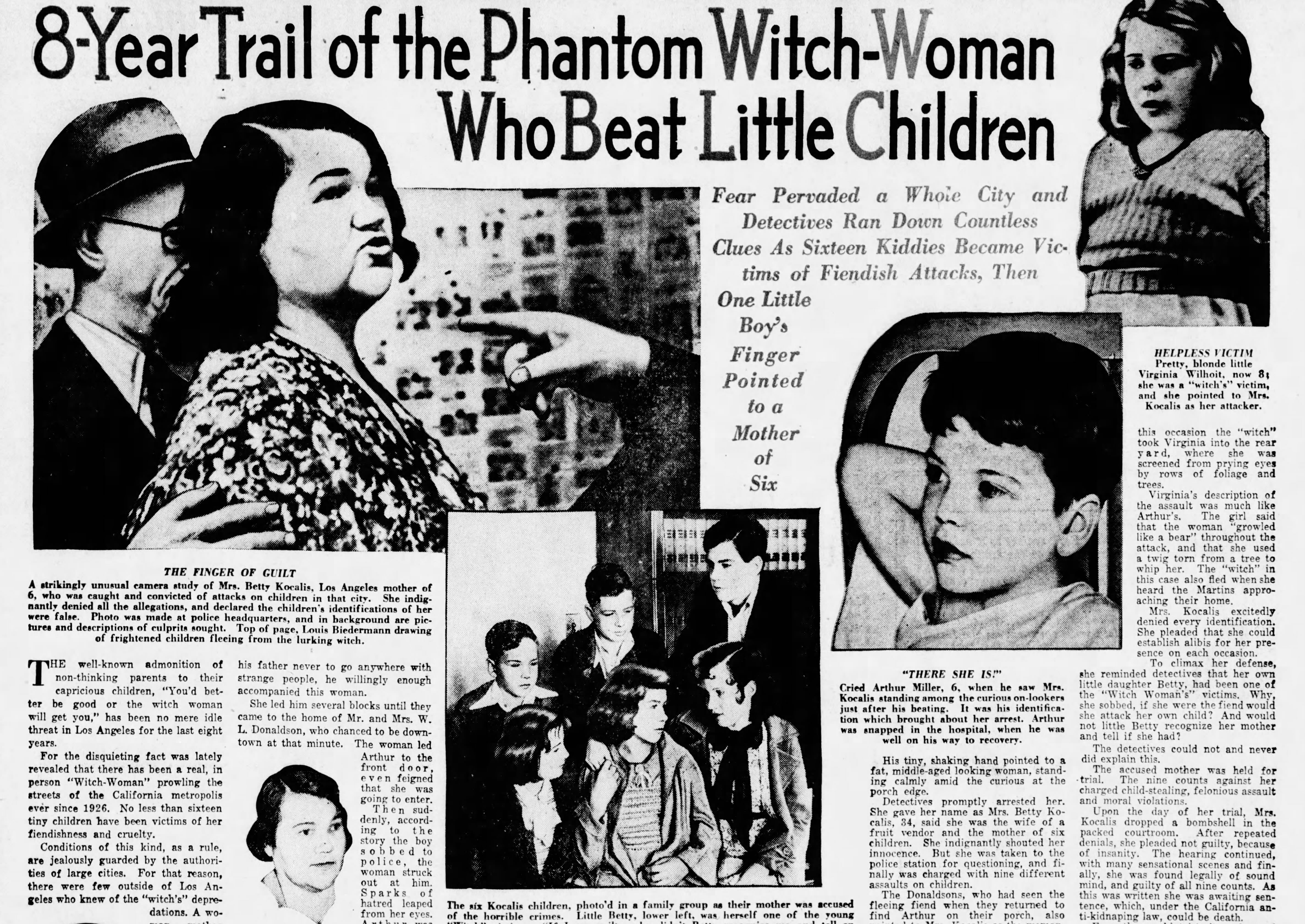 The children’s testimony, as reported by Los Angeles Times, indicated sexual abuse. To bolster this accusation, prosecutors accused Kocalis of molesting her victims by beating bare bottoms with a leather strap until she had reached a state of exhaustion.

On the stand, Kocalis denied encountering Fosterling or Wilholte and said that she had found Miller semi-conscious in a gutter after he had been struck by a car. She told the jury that she had carried the unconscious boy to the Donaldson’s house for help. When prosecutors asked why she ran from the porch, she replied that after discovering that no one was home, she had gone next door to seek assistance. The prosecution refuted her claims by presenting medical reports on Miller, who had been hospitalized and treated for a beating, not a hit-and-run car accident.

On June 6, 1934, the court found Kocalis guilty on all counts. Her attorneys immediately filed an insanity plea, but dropped it before a sanity hearing could take place.

The court fined Kocalis $1000 and sentenced her to serve three years to life at the Tehachapi Women’s Prison. Her husband, Christopher, a café owner, stayed married to her until his death in 1959.