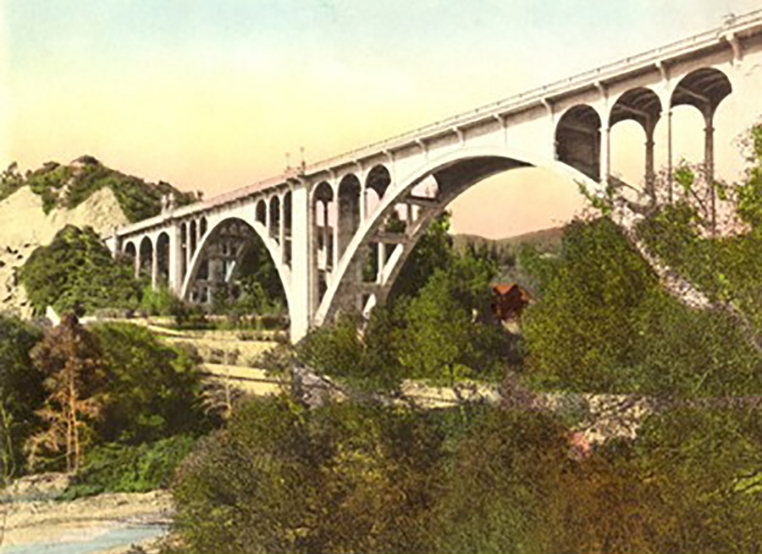 Los Angeles Times, June 2, 1915 — Bowed with grief, Mrs. M. Roma of No. 1225 West 35th Street, Los Angeles, accompanied by her son, Rafael Roma, of San Francisco, left last night for the northern city with the body of another son, Joseph M. Roma, whose corpse was found by workmen Thurdsay morning under the Colorado-street bridge.

Both the mother and her son refuse to believe that the dead man committed suicide. They believe that while viewing the scenery at this spot which he loved so well he was overcome by the heat, lost his balance and plunged 200 feet below to his death.

Los Angeles Times, June 7, 1915 — With the suicide early yesterday morning of Alfred T. McDonald, a young Canadian, 26 years old, the Colorado-street bridge over the Arroyo Seco has claimed its second tragedy within the past ten days.

Sick and tired of his life Joseph M. Roma, a mere youth, of No. 1225 West 35th Street, Los Angeles, gave the longest and highest bridge in the world its “blood-christening” just ten days ago.

The young Canadian had suffered for nearly four years with asthma and since his coming to Pasadena the latter part of March had been many times at the very brink of death. When he heard of young Roma’s suicide he told his friends at the Aberdeen Hotel on West Union street, where he lived, that he would go that same way some time; and if he learned he had tuberculosis he would go very soon.

Saturday his physician told him that what he feared was true. He had tuberculosis; but he could be cured after a long, long time.

So, that night, when he sat down for supper by the side of his friend, L.N. McKelvie, who had been his ministering angel, McDonald told him what the doctor had said. Then, looking into his face and smiling, he said: “I shall go very soon like the poor fellow did last week. If some time you miss me you will find me where they found him.”

At 8 o’clock he disappeared, but it was not till late that McKelvie learned that he was gone. He and another friend went to the Colorado-street bridge. There they found the body hanging by a short slender rope. He had been dead for hours.

The police were notified and his body was taken to Reynolds & Van Nuys undertaking parlors, where it lies, awaiting instructions from relatives.

He leaves two sisters and a brother. One of the sisters, Miss Margaret McDonald, lives at Portage la Prairie, Montreal. A married sister resides in Quebec, while the brother is in North Dakota. McDonald was almost penniless, having exhausted his funds in hospitals, where he had been treated for 34 months. Little is known of the dead man here.

Los Angeles Times, January 9, 1916 — The Colorado-street bridge, the longest, highest bridge in the world, claimed its third victim yesterday afternoon, when F. J. O’Neal, a prominent businessman of Guelph, Ont., leaped from the structure into space, falling with such terrific force on the rocky bed below that he died within 15 minutes.

R.W. Lange of No. 1093 North Catalina street and P.E. Powell of No. 1125 North Wilson avenue, who witnessed the tragedy, were horrified. They ran to the end of the bridge and saw the man writhing in agony a hundred feet below. His left arm was crushed and his body bruised, and there were internal injuries.

When the two witnesses first noticed him they were attracted by his fine appearance, for he was well-groomed, of fine physique, and just the kind of man to attract attention anywhere. He was carrying an overcoat over his arm, and when his pockets were searched to identify him a gold watch was found, as well as several letters which indicated that he was a man of prominence.

He came here several days ago with his wife, suffering from a nervous breakdown, in hope that the change would restore his health.  Yesterday he went for a walk which took him over the bridge. He gazed with seeming fascination up and down the arroyo, when suddenly he started running and made the death leap.

His wife, who is stopping with relatives at No. 294 Winona avenue, was not informed of her husband’s suicide until late in the afternoon, and although almost crazed with grief and shock, was bearing up last night. The body is at Reynolds & Van Nuys awaiting orders from Coroner Hartwell.

Los Angeles Times, February 17, 1922 — “Suicide bridge” claimed its 12th victim today when George W. Jackson, 50, landscape gardener, leaped to his death from the parapet of the Colorado street bridge to the hard pavement of Arroyo drive, a sheer drop of 100 feet.

Los Angeles Times, April 14, 1924 — Believed to have been despondent over ill health, J.R. Woodward, 76 years of age, 776 North Minter avenue, Pasadena, committed suicide yesterday morning by leaping off the Colorado-street bridge in Pasadena, to the dry river bed, more than 150 feet below. He was killed instantly.

Two small boys saw the man take his leap and reported the incident to the Pasadena police. The body was removed to the undertaking parlors of Morgan and Pierce, Pasadena.

Wed. 27, 1927— Pasadena, CA— Twenty-two sticks of dynamite were found planted beneath the famous Colorado street bridge yesterday, revealing what may have been an unsuccessful attempt to destroy the span. The dynamite sticks had been lashed together and to them was attached a time fuse, which had failed to operate, and a quantity of wiring. 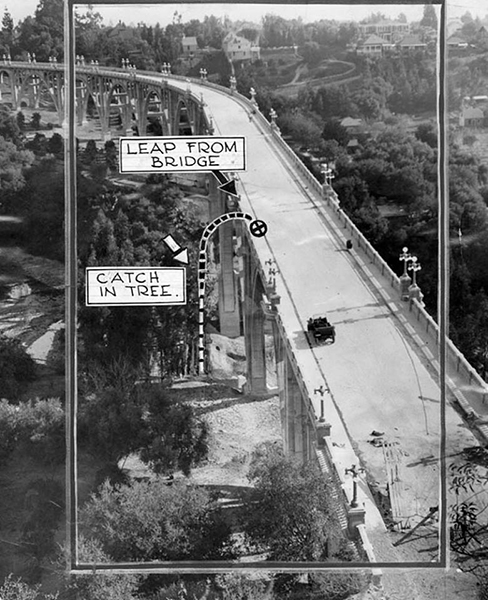 First Time Act Has Not Been Accompanied by Death

PASADENA, August 8, 1928 — Dare-devils who have gone over Niagara Falls in a barrel had reason to be jealous of 17-year-old Jay Page of 70 Vinedo avenue, who is alive and well today after leaping from the Colorado-street bridge last night at a point where the span is more than 100 feet above the rocky Arroyo Seco bed.

Young Page, who is employed as a tree trimmer by the Bastian Beele Tree Surgery Company is the twenty-second person to leap from the bridge and the first to live to tell of his experience.

“I always wanted to be the first to do something and I guess even Lindbergh would have been afraid to try it as I did without any parachute and in the dark!” exclaimed Page today.

The tree trimmer was walking across the span with a girl companion and Robert Thomas of 2243 Figueroa Place, last night, when Thomas said to Page, “Well I know one thing you’re afraid to do, and that is to jump off this bridge.”

“If you’ll pay for my funeral if I fail, I’ll try it,” retorted Page, who is reported to have “never taken a dare.” The party halted about 150 about 150 feet from the west end of the bridge at a point where the tops of three giant eucalyptus trees reach to within ten feet of the bridge railing.

Ignoring the warning cries of the girl in the party that “You’ll be killed!” Page tossed his coat to Thomas and without any hesitation hurdled the railing.

The others in the group declared that their “hearts stopped beating” when they saw the youth’s body shoot into space 100 feet above the canyon floor.

Page attempted to save himself by gripping the first limb of the eucalyptus tree, but his fingers lost their grip. With a final effort, he threw his arms about the tree trunk and managed to halt his descent after dropping through limbs for about six feet.

After “shinnying” down the tree, Page climbed the Arroyo Seco bank and rejoined his friends.

“If I ever do kill myself, it won’t be by jumping off anything — I don’t like the sensation,” he averred. 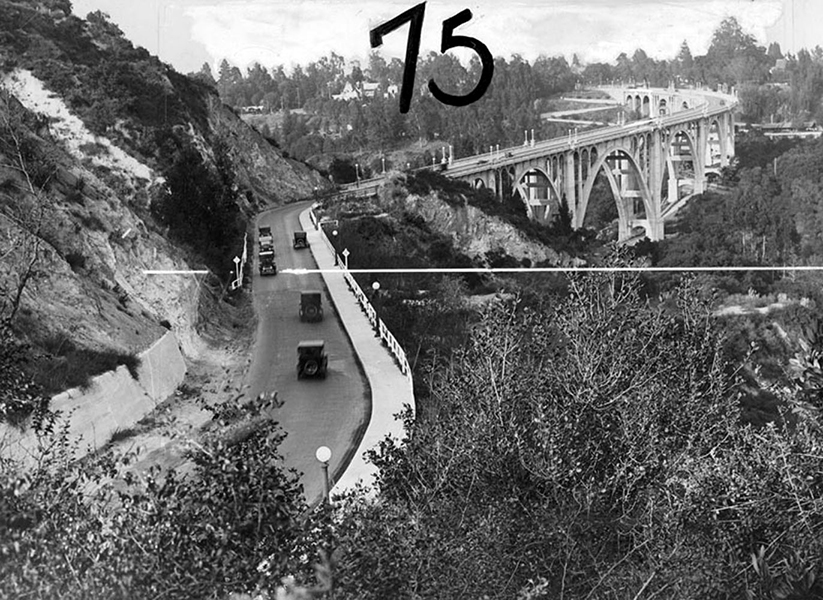 Los Angeles Times (July 8, 1936) — After removing all marks of identification from his clothing, a man about 40 years of age last night climbed to the center arch of the Colorado-street bridge, Pasadena, and became the seventy-fifth person to leap to his death from the classic structure which spans the Arroyo Seco.

C.B. Cordner of 535 Prospect Terrace, Pasadena, who was driving across the bridge about 7:30 p.m., said he saw the man leaning against the arch and thought he was drunk. As he drew nearer, however, the man climbed to the archway and jumped before Cordner could stop him.

An effort will be made to identify him through fingerprints, police said.

However, before Pasadena city officials could vote on the measure, two more people attempted to jump from the bridge on July 17. One succeeded and the other didn’t. The seventy-sixth victim was 38-year-old Albert Rafferty of Los Angeles, who left behind a wife and seven-year old daughter. The suicide note found on his body said that he was “tired of working for $20 and $25 a week and there appears to be no future.” The one who failed was Henry Hernandez, who was physically restrained by a transient named Fred Reagan until the police arrived. Hernandez was arrested for vagrancy and sentenced to 30-days in jail. Hernandez told police that he was depressed because he was unemployed and that he had recently had a fight with his parents.

Around midnight on July 21, police arrested a 25-year old Glendale resident named Olive Matthews walking near the bridge. In her pocket were two suicide notes. Apparently, Matthews had spent the past few years grieving the death of her mother, and had planned to kill herself. The Pasadena Police later released her after she promised not to end her life.

That same day, (literally hours after Olive Matthews was arrested and released) the Pasadena Board of City Directors unanimously voted to reject the $7000 expenditure, and the suicides continued… 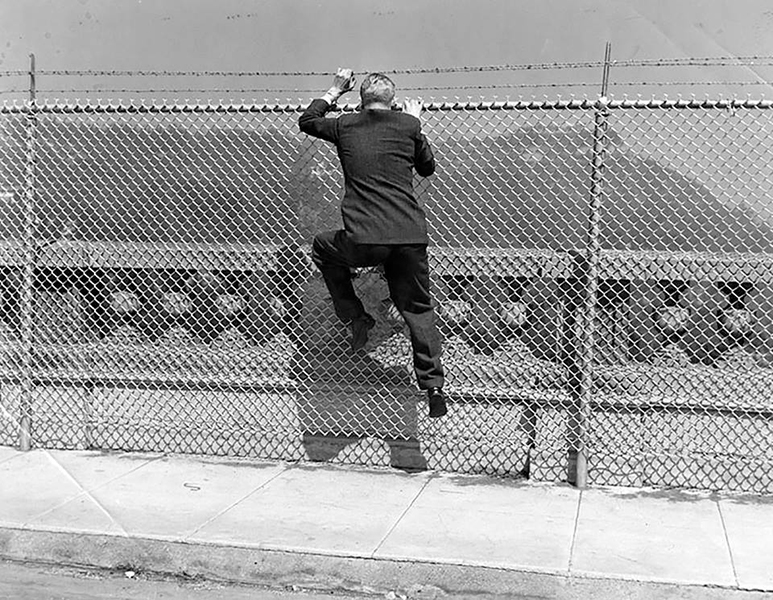 One Side Ready to Stop Deaths From Arroyo Seco Bridge

LOS ANGELES TIMES – July 29, 1937 — One side of the seven-and-one-half-foot woven wire fence, designed to discourage would-be suicides who might choose the Colorado-street bridge in Pasadena as their springboard into eternity, is now in place and the rest will be completed “within a few days” according to Harvey Hincks, Pasadena City Engineer.

The heavy barrier, when finished, will begin inside the balustrade on both sides of the span about sixty feet inside each approach and extend 1394 feet. The whole will be crowned with several strands of heavy barbed wire.

Funds for the fence, which became a city issue in Pasadena after ninety-one persons ended their lives in dives to the floor of the Arroyo Seco will be supplied by the State Highway Commission. 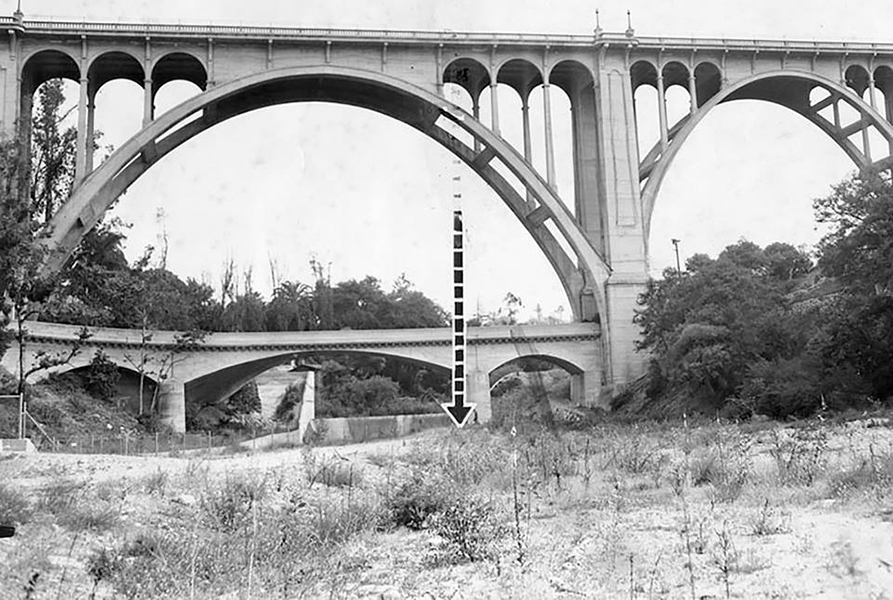 Herbert John Reeves, 26, of 716 S Madison Ave., Pasadena, wrote a note in which he said, “I know what I’m doing” and willed his property to his mother.

His father, Herbert Reeves, a California State Deputy Commissioner of Corporations, said that his son had been ill and despondent since serving in World War II as an Army weather observer and radio technician and recently was under treatment at the Sawtelle Veterans Administration Hospital.

Reeves, who served as a deputy sheriff from July 19, 1948, until last December 19, was seen standing on the outer southern parapet of the bridge by Francis P. Cherry, a motorcyclist, of 273 Mar Vista St., Pasadena. Cherry shouted a vain warning, then summoned police.

The Colorado St. Bridge was nationally known as a suicide spot until the Pasadena Board of City Directors in 1937 authorized construction of the high fence, topped by three strands of barbed wire. Up until that year, 79 persons had jumped to their death from the structure. The fence was denounced by many people as “unsightly,” but in the past 12 years there had been but one suicide, according to official police records – until yesterday.

Other persons have taken their own lives by leaping from nearby, smaller bridges spanning the Arroyo Seco and from lower abutments under the main Colorado St. span, but the woven wire fencing discouraged several other would-be suicides since its construction.