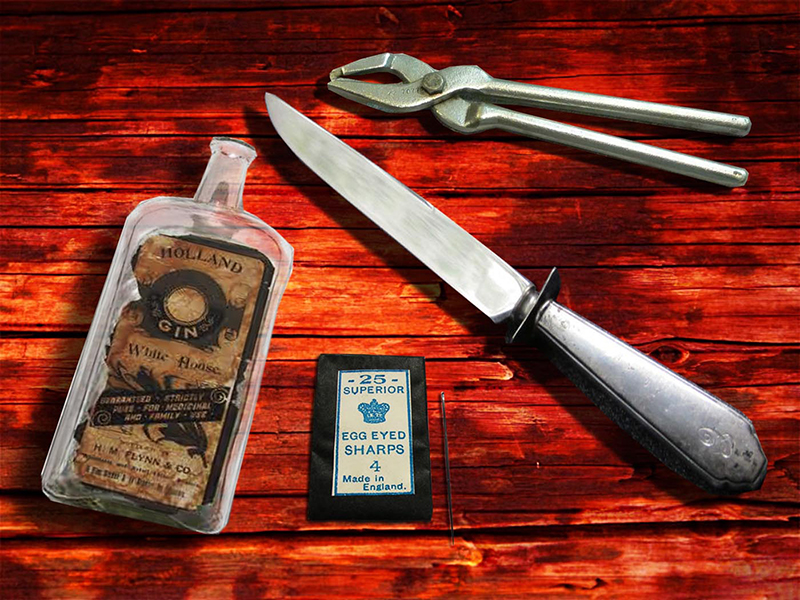 LOS ANGELES, August 2, 1930 – (UP) – A cook’s carving knife, a pair of pliers borrowed from the carpenter, a bottle of Holland gin and a needle and linen thread, saved the life of a seaman stricken with appendicitis, and as a result Dr. David R. Robbins, Los Angeles surgeon, recently was presented with a huge silver loving cup by the Planet Steamship company.

A little more than a year ago Dr. Robbins and his wife left Los Angeles on the steamship Noorderdyk for Germany, where the doctor was going to study for a year. He left all his surgical instruments at home, intending to buy new ones in Germany.

Three days out of Panama, the Noorderdyk received an S.O.S. from the steamship Corvus saying that Henry Lohse, 21-year-old sailor, was stricken with appendicitis.

The Noorderdyk steamed to the Corvus and when they met Lohse was transferred to the Noorderdyk. Dr. Robbins was asked to save the man’s life.

Dr. Robbins borrowed a carving knife from the cook, made the incision with a needle and thread borrowed from his wife and disinfected the wound with Holland gin. A piece of rubber tubing from a shower bath was used to drainage. As a result of the operation, Lohse is hale and hearty, hauls on the main brace and lustily sings, “Blow the Man Down.”

Because he used such strange instruments, Dr. Robbins refused to accept any pay for the operation.

Dr. David R. Robbins was 37-years-old at the time of the unusual operation. His wife’s name was Blanche.