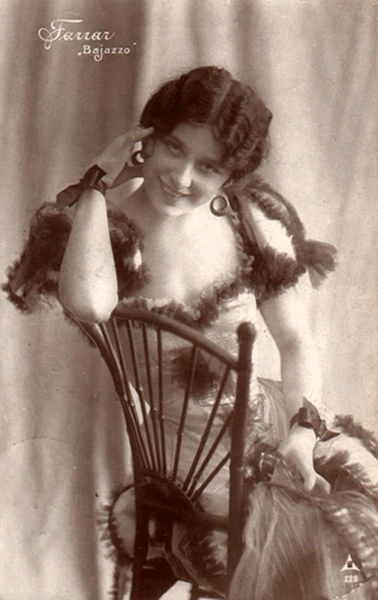 “I don’t believe that the people would really have any interest in seeing me in pictures. They came to the Metropolitan to hear me sing, but if I should lose my voice overnight, do you think they would still come to see me? No! And they would make unkind remarks, too; I am afraid I should be an awful failure if I relied on acting alone.” — Geraldine Farrar 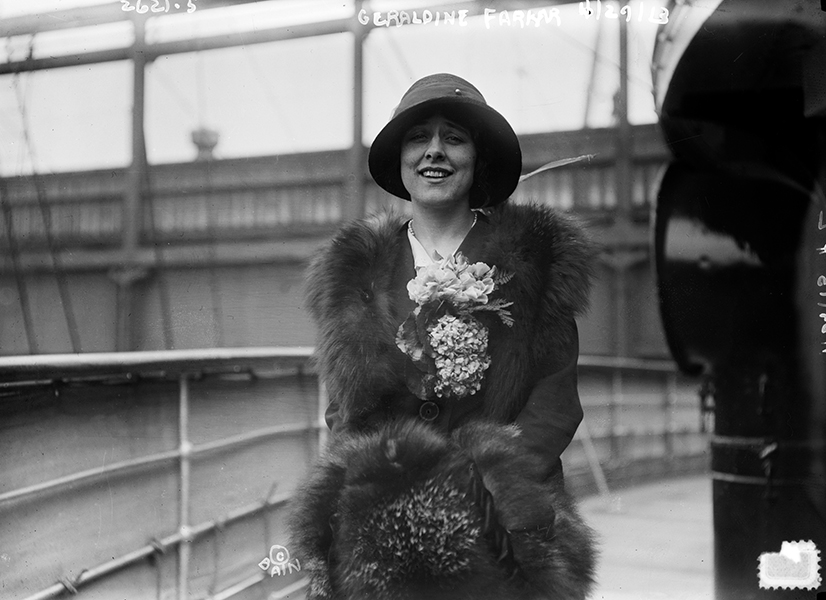 “How cruel it is that riches, or at least comfort, come to most people when they are too old or too weary to enjoy life or the beauty of countries and peoples they have never seen!” — Geraldine Farrar 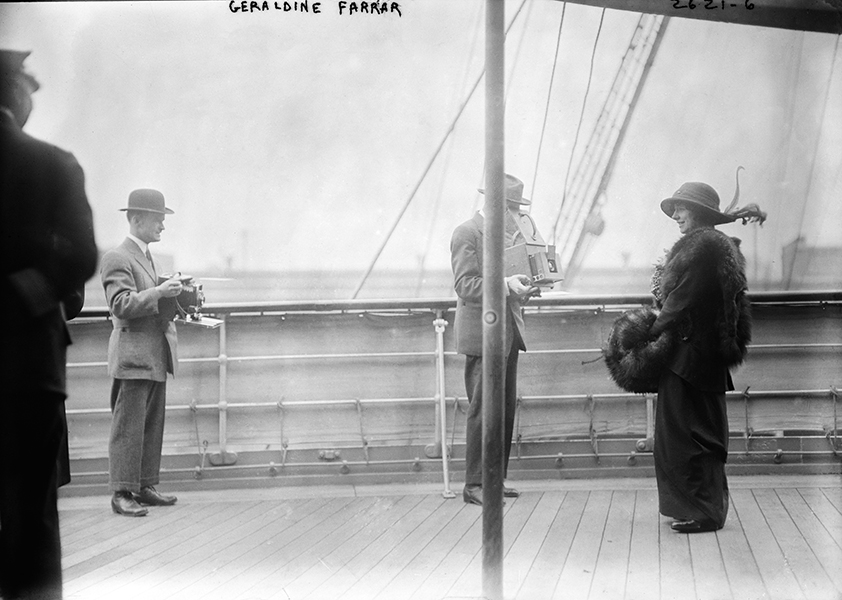 “Really – to perpetuate one’s youth one should have a photograph taken every day – until the age begins.” — Geraldine Farrar 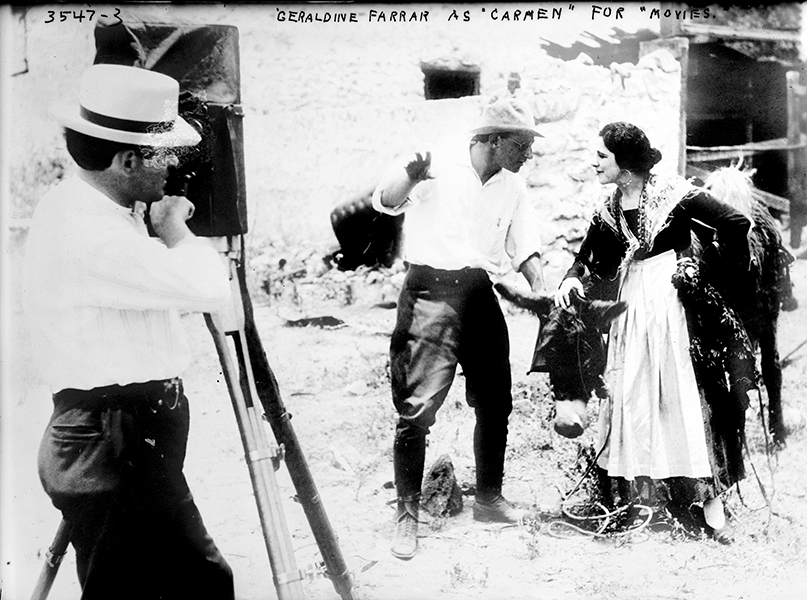 “The only way to really live forever is on a picture screen. The chap who invented the movie camera found the eternal-youth spring that Ponce de Leon missed.” — Geraldine Farrar 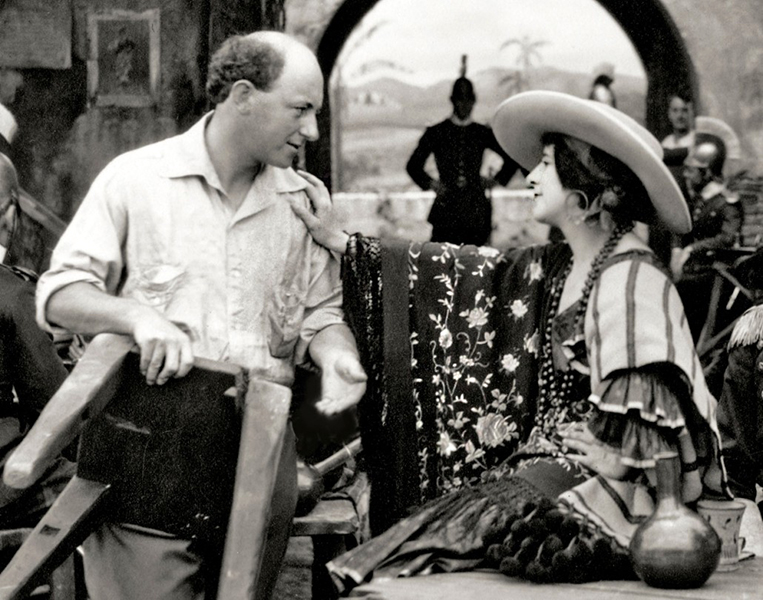 “I love the freedom of the pictures. It is as if bonds that strapped down the spirit were broken. In grand opera, every gesture, every movement has to be in perfect accord with the score. And even the most wonderful music ever written isn’t altogether forgivable for holding the actress prisoner. But here. Ah, here it is different. At first I asked Mr. DeMille if there were any time limit to playing certain scenes. He said: ‘You act them just as long as you please.’ So now I emote for 50, 75 or a hundred feet if the spirit moves me. And you know I believe Carmen is being truly interpreted for the first time.” — Geraldine Farrar

Photo: Cecil B. DeMille and Geraldine Farrar on the set of Carmen (1915). 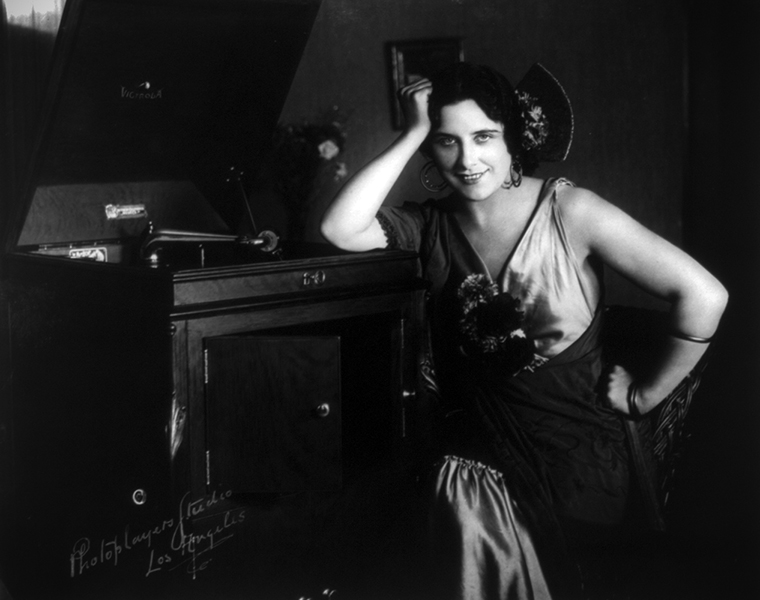 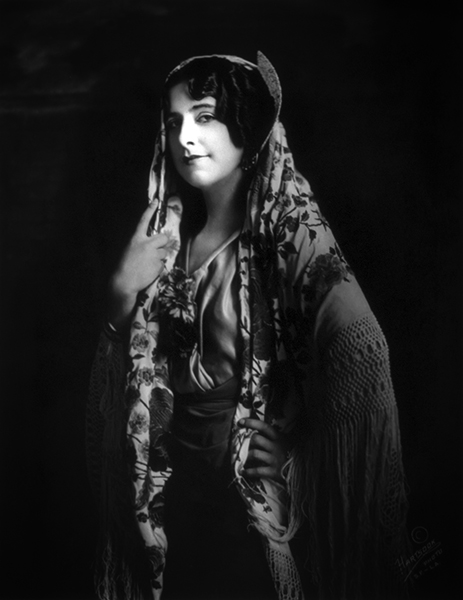 “I avoid late hours, love the out-of-doors, and strive always to have a great enthusiasm and to keep well and happy.” — Geraldine Farrar 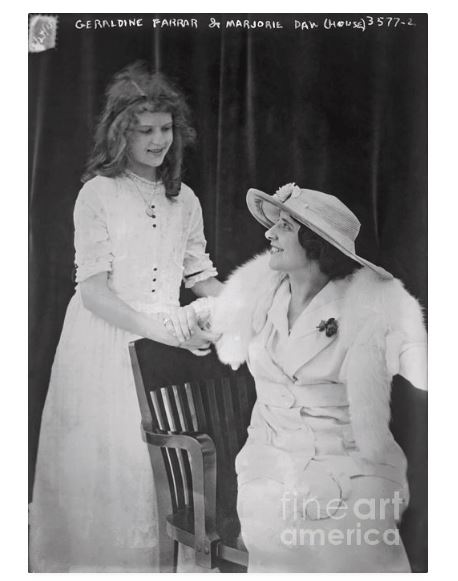 “Miss Farrar saw me one night in ‘Out of Darkness,’ which I did with Charlotte Walker. She said very nice things to me the next day when I met her at the studio. I had been worshiping her a long time, of course, like all the girls at the studio, and I used to walk back and forth in front of her dressing room and listen to her practicing. Then one day she was going by my dressing room, and she heard me singing. She rapped and asked if she might come in. I was awfully embarrassed, especially as my dressing-table was topsy-turvy, but Miss Farrar only smiled and said, ‘You ought to see mine sometimes,’ and that made me feel all right. She made me sing for her right then and there. I was so frightened I’m sure my voice cracked some, but she seemed to like it. She was just divine, gave me a number of lessons herself, and promised to see that I have vocal lessons.” — Marjorie Daw (pictured) 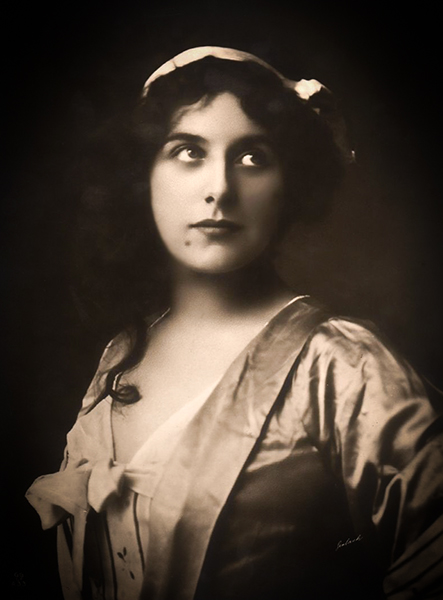 “I would advise 90 out of every 100 not to study singing! I will not advise anybody personally – never have and never will! A girl may have a great deal of splendid talent, a lovely voice, a charming personality, but how can you know whether it is going to amount to anything? She may not have anything up here! And that amounts to so much, you know. A lovely voice without brains amounts to very little in the long run.” — Geraldine Farrar 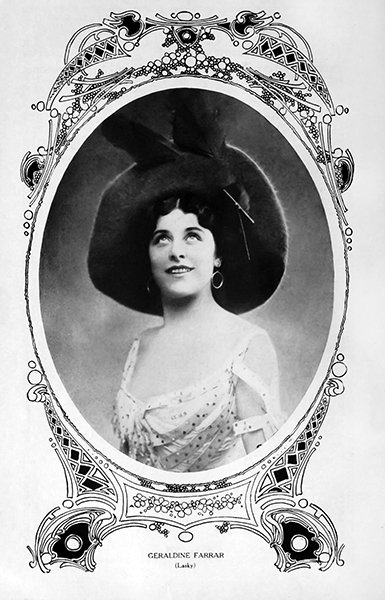 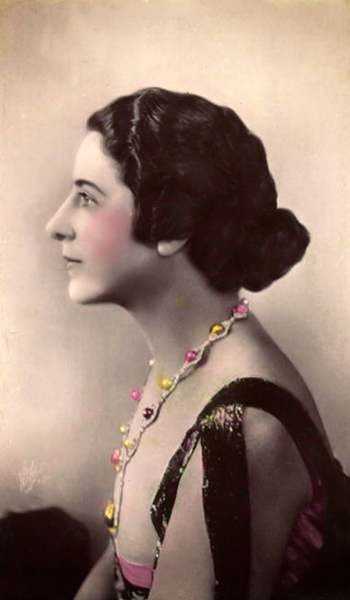 “Although I never give advice for anyone to follow, I have decided ideas about the training of a girl who wants to go into grand opera. I think by the time a young woman is 18, she should have begun her serious work, for by that time her musical bent will have declared itself, and she will know whether vocal or instrumental music is to be her chosen metier, and something definite about the range and possibilities of her voice if she is to become a singer. A girl must never forget that good tone production depends on good health. Her food must be plain and wholesome. In regard to the amount of vocal training to be taken every day, one cannot lay down absolute rules. The quality of her voice and state of her health must determine that.” — Geraldine Farrar 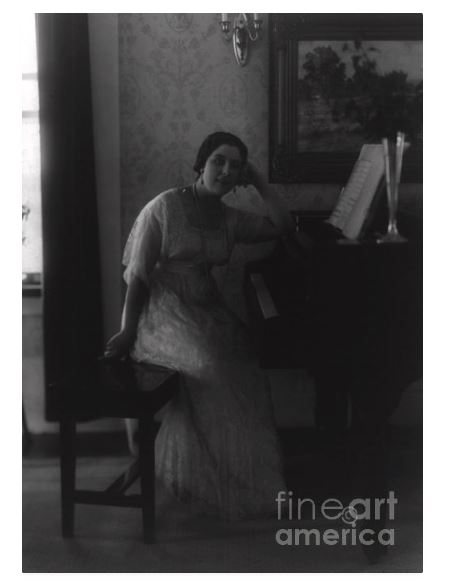 “I, personally, do not favor opera translated into English. I don’t think it is musical, and I don’t see why people should favor changing from the language in which it is written. The literature should mean as much as mere vocalism….I am a strong believer in the value of European study for girls, especially for an operatic career. It is indispensable. Be sure not to quote me as saying that I do not favor European study for American girls. But don’t quote me as advising them to go to Europe, either, for, as I said before, I never give advice. The proportion of lovely voices that we have in this country is very large, but the proportion of ability is pitiably small. I don’t know whether that could be fostered by proper education or environment. We have, unfortunately, no subsidized conservatory, nor any school, which gives results. Whether it is the teaching hasn’t brought it out, or whether they lack that certain stratum of musical ability, I don’t know. That is an open question. I do know that I hear lovely voices much more in proportion than I see people who are interesting. “ — Geraldine Farrer 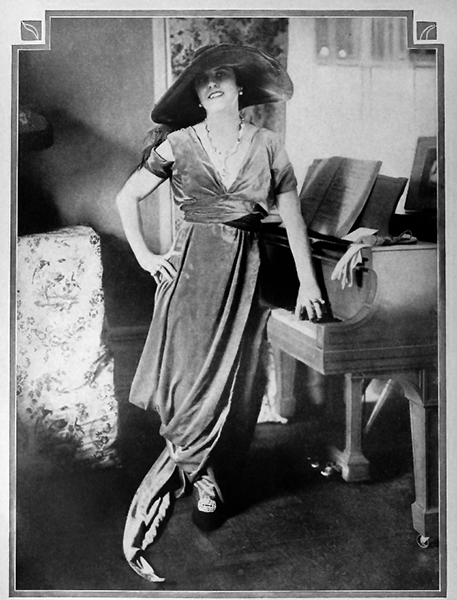 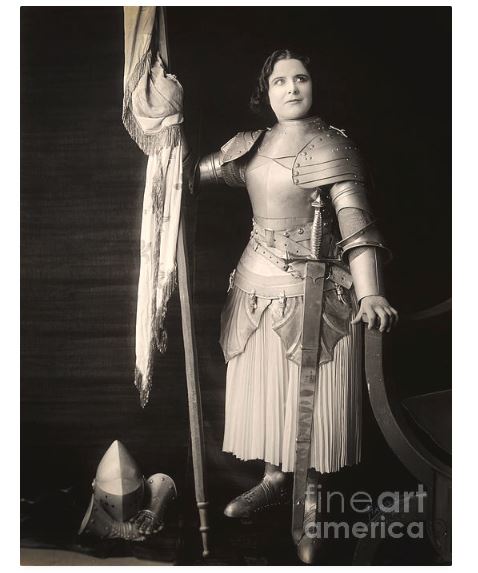 “Work! And Moving Pictures! They are the most fun; I enjoy them so much that they are surely recreation for me. Of course, there can be no comparison between them and my singing in opera or concert. They are entirely different; but, as I said before, they are great fun.” — Geraldine Farrar 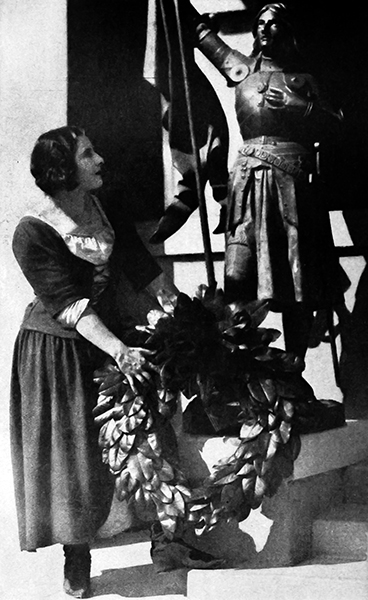 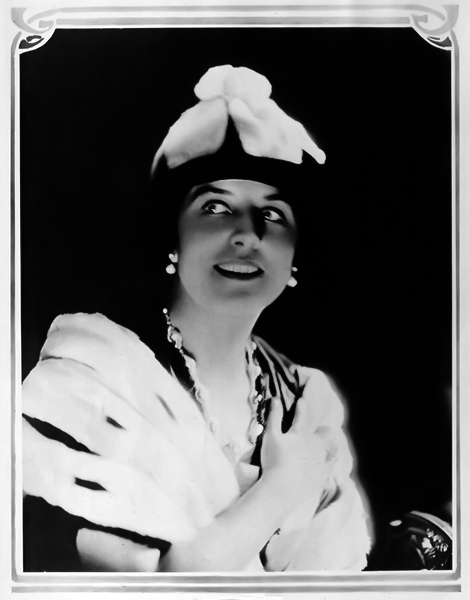