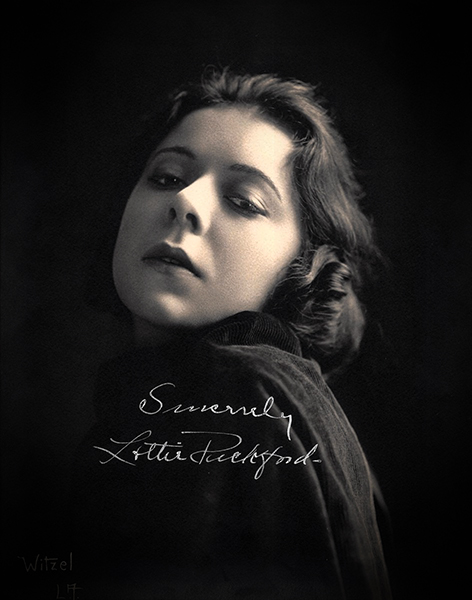 “Last January I came out to California with Mary and the Famous Players. I like the work in Los Angeles, but I knew there was no chance of getting very far with that company as long as they were featuring Mary. One Pickford at a time is enough for any company to feature; so the offer from the American at Santa Barbara received ready consideration.” — Lottie Pickford 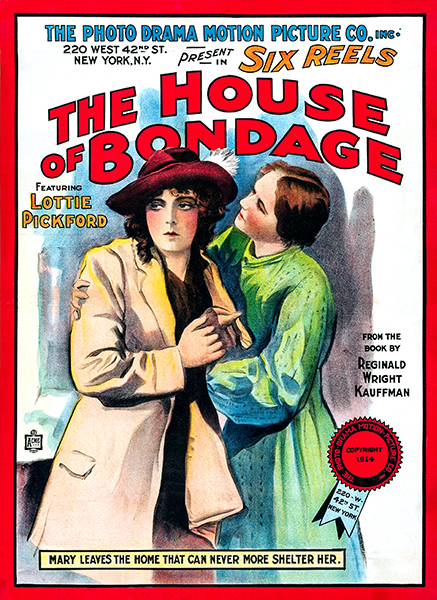 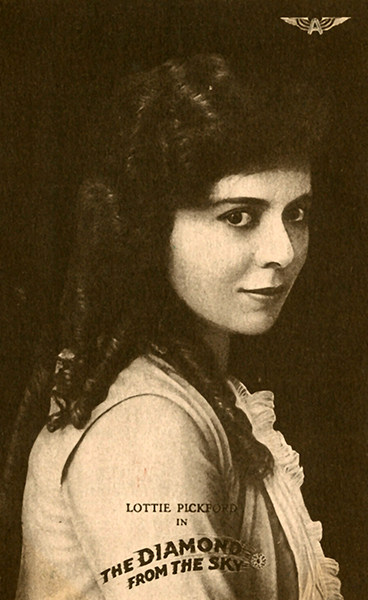 “As I understand it, The Diamond from the Sky’ will be the screening of a complete mystery novel, and it will take thirty-five weeks to finish it. So far they have not told us much about it. I guess they want us to help the public do the guessing, as they just carry us along from chapter to chapter.” — Lottie Pickford 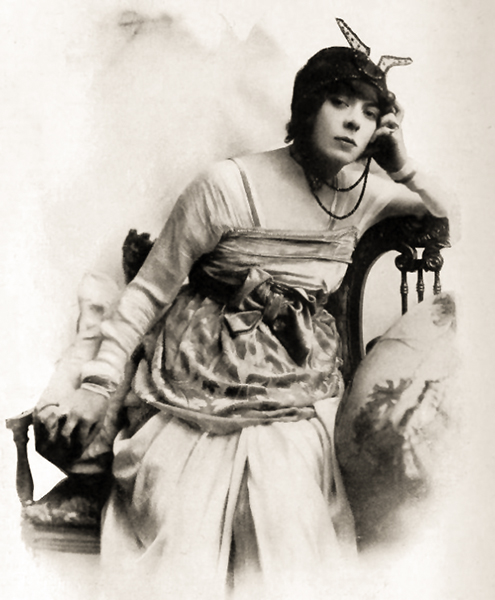 “I think I have played almost every character, from the young girl of sweet sixteen to the heavy woman, commonly called the villainess, but I have no choice, and enter into any part hoping to do my best.” — Lottie Pickford 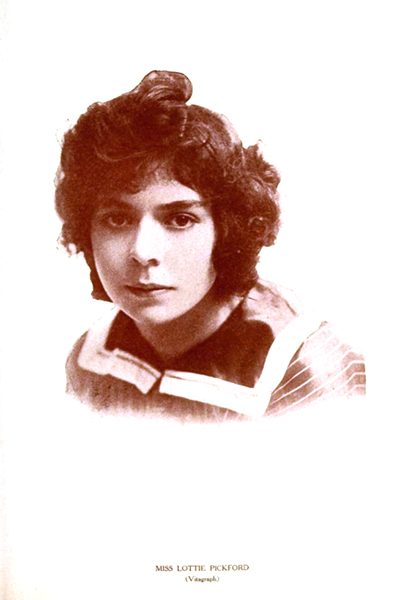 “Mary’s story has been published lots of times, and mine is about the same. Usually when Mary had a good part, I understudied her both ways from Little Eva.” — Lottie Pickford 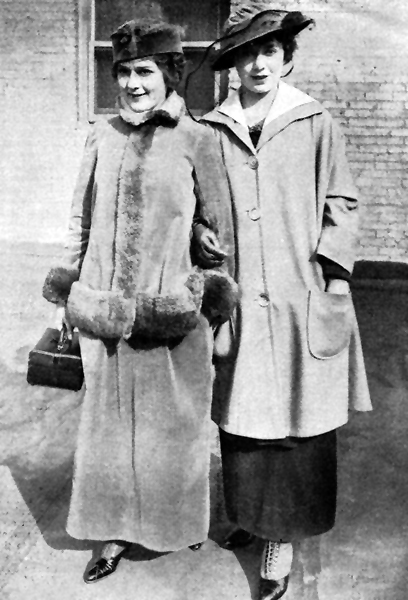 “I am nineteen; was born in June, 1895; and you may tell my friends in the audience that although I am younger than my sister Mary, I have always been thought the elder. You see, we have made Mary the baby of the family and look upon her as a child, forgetting that she is twenty.” — Lottie Pickford 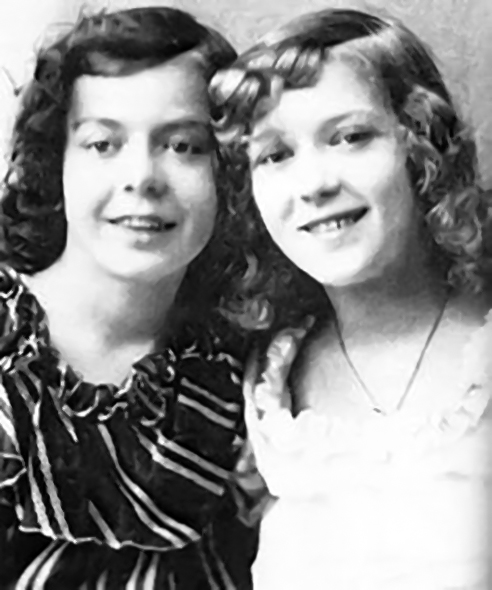 “We have always been inseparable, and always will be, in spirit if not in body. Perhaps it is because we are so different that we get along so well. I have been accused of being more aggressive than Mary and perhaps I am, because I have a horrible distaste for turning the other cheek when someone swats me. It’s just the same when anyone is unkind to Mary. You see I feel something like a big brother toward her now that I am so much bigger and I would and do fight just as readily for her as for myself, and that is some readily, I can assure you!” — Lottie Pickford 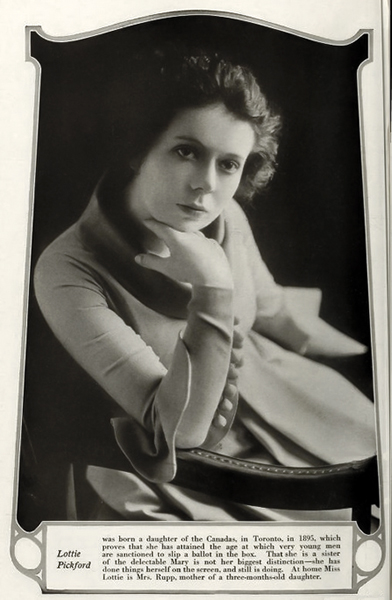 “I was christened Lottie Stella after mamma, whose name is Charlotte, but I’ve never featured the Stella. I never did like that name, but as it means ‘star’ perhaps there may be something prophetic about Mamma’s christening idea. At least I hope so.” — Lottie Pickford 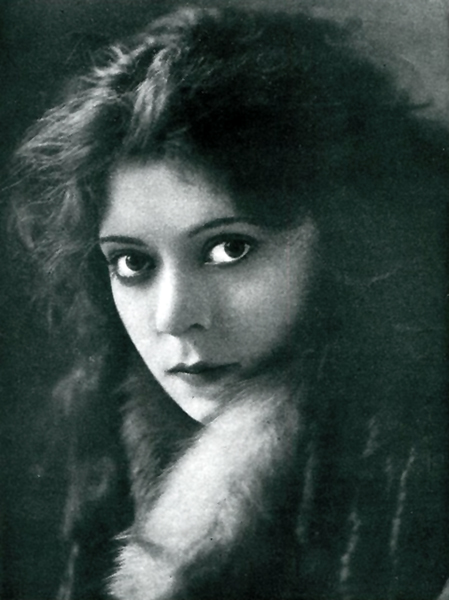 “I have been jealous of [Mary] in the past, but it has been something of  a secret with me. It had nothing to do with her success. It was only because I thought Mamma paid more attention to her than she did to me.” — Lottie Pickford 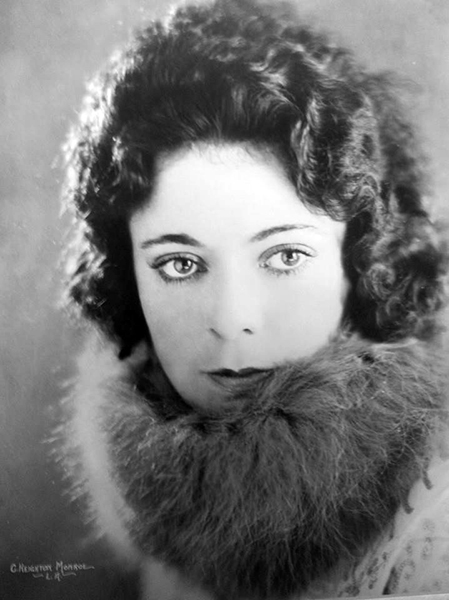 “Let me tell you (this very confidentially) no one will ever have to fight for me!” — Lottie Pickford

Couple Kicked, Slugged and Robbed by Ruffians When They Stop Near Group

LOS ANGELES, November 9, 1928 – (AP) – Although Lottie Pickford, sister of Mary Pickford Fairbanks of the films, and the actress’ escort, Jack Daugherty, tonight accompanied detectives on a two-hour automobile tour of a part of East Los Angeles, they were unable to locate the place where they said they were beaten and robbed and Miss Pickford was abducted earlier this morning.

At the end of the two-hour journey though a part of East Los Angeles which has a large negro and Mexican population, police said they had made little progress with the investigation.

LOS ANGELES, November 9, 1928 – (AP) – Fingerprints taken form a small coupe, from which Lottie Pickford…and her escort, Jack Daugherty, former husband of the late Barbara La Marr, were dragged, beaten, robbed, and Miss Pickford kidnaped earlier today, were being studied tonight by police fingerprint experts. The attack and kidnapping, which occurred about 3 o’clock this morning, was reported by the police several hours later, after Miss Pickford had been released and returned to her home.

Miss Pickford displayed ripped clothes, bruised wrists, ankles and legs, and told the police that her assailants had kicked her body until it was a mess of bruises. Daugherty’s left ear was bruised and bloody and he had two welts, one on the back of his head and the other on his jaw, from the blackjacks of their assailants.

Detailed descriptions of the kidnapers, of whom there were four, were given to police by Miss Pickford and Daugherty. They were described as being about 19 and 20 years of age with the exception of the apparent leader, who spoke Spanish and appeared to be a few years older.

Miss Pickford told police that Daugherty was escorting her home from a nightclub in her own car when they became confused as to their direction and stopped to ask a group of four men on a street corner the route to Hollywood. She said that as Daugherty got out of the car the four attacked him, slugging and robbing him [of $15]. One then got in her car while the others hung on the running boards, and they rode nearly a mile to a lonely spot.

There she declared she fought the gangsters as they robbed her of a purse, attempted to steal a platinum bracelet, and forced her from the car. She said that while two of the gangsters attempted to assault her she groaned, “Oh Madre,” the Spanish word for “Oh, mother.” and that the leader ordered his accomplices to desist. This assailant put her back to where Daugherty, just regaining consciousness, was staggering about, Miss Pickford stated.

She added that the Spanish speaking man, upon releasing her, had said he would return her “to her husband,” and that he ordered Daugherty not to call for help.

Had Guns and Blackjacks

“Two of the men had guns,” said Miss Pickford, “as well as blackjacks.”

She added that while two of them were beating her one said, “let’s take her to the shack,” and that they said “lots more, but I can’t repeat it.”

The police fingerprinted Daugherty and Miss Pickford as well as taking prints from the car and its steering wheel in their effort to obtain clues to the identity of the assailants.

Police detectives had no luck finding the alleged robbers. A later newspaper report stated that Pickford and Daugherty had driven with another party to a “Negro resort” on Central Avenue, which was probably the Dunbar Hotel. After the hotel’s nightclub closed, thugs allegedly robbed Pickford of $75 cash. Pickford also claimed that she had hidden several diamond rings in her shoes and a pearl necklace in her dress, which were not taken by the robbers. Her $4,000 platinum bracelet, however, was bent from someone trying to remove it.

Los Angeles Times (December 26, 1928) Investigators from the office of Dist.-Atty. Fitts last night were making a complete check on the Christmas Eve party at the home of Lottie Pickford, at which, Hollywood police report, Jack Daugherty, former husband of Barbara La Marr, and Daniel E. Jaeger, “retired” businessman, engaged in a vicious fight, which sent Jaeger to the hospital for treatment, while Daugherty slipped away.

A long-standing enmity between the two men is blamed for the personal encounter which, police assert, is the culmination of other tilts, and was brought to a climax at the Christmas celebration. The District Attorney’s interest in the affair is said to be based on a report that beverages stronger than allowed by the Wright Act were served at the party and the resultant investigation is expected to uncover the source of the asserted liquor, and the persons responsible for its delivery to the home of the film actress.

Hollywood police took notice of the party, according to their report, when neighbors telephoned the station that a “wild fight” was in progress at the Pickford home, 6622 Iris Drive.

When Detectives Puckett and Robertson arrived, they reported, most of the guests were leaving. They did not find Daugherty and they said neighbors told them later he had slipped out of a side door as they entered the house. They found Jaeger, however, in a battered state. He had bruises about the head and face and his right hand was bleeding profusely. The detectives learned that during the fight Daugherty had bitten Jaeger’s hand, nearly severing the middle finger.

Jaeger was taken to the Dickey & Cass Hospital, where his wounds were treated. He refused to make any formal complaint against Daugherty. He said he is a “retired capitalist” and gave his address as Miss Pickford’s home.

The detectives said that Miss Pickford appeared herself to have been struck during the course of the battle but she asserted she was not hurt and regretted the whole affair very much as both men are friends of hers.

The few other guests at the party who were present when the detectives arrived said that jealousy over the affections of Miss Pickford was the cause of the fight.

Even before the fight broke out, the party at Miss Pickford’s home had become so boisterous as to make neighbors to telephone a complaint to the Hollywood police station…

Several weeks ago the names of Daugherty and Jaeger were linked with that of Miss Pickford in connection with the story of an asserted attempt by three unknown men to kidnap her. At that time, Miss Pickford told the police that she and the two men were in a party which visited a negro resort on Central avenue. Jaeger, she said, left the place long before she left for home in company with Daugherty. It was on their way home, she said, that the three men waylaid them, beating Daugherty and kidnapping her but subsequently releasing her.

Jaeger was a mystery man. Some newspapers hinted that his name might be an alias. Not only did Jaeger refuse to have his picture taken, but he refused to charge Daugherty for severing a tendon in his middle finger.  He also refused to answer questions about his past.

Pickford left her house shortly after Jaeger was taken to the hospital and she refused to appear in public until the scandal had quieted down. In her absence, rumors swirled that Jaeger was the one who had assaulted Pickford, and that Daugherty had attacked him because of it. Other rumors maintained that Pickford was privately having her injuries treated in an undisclosed medical facility. Jaeger’s name had also been indirectly linked to Pickford and Daugherty’s mugging a few weeks back.

A few days after the fight, Pickford told the press, “Oh, the boys just raised a little whoopee, but they’re good friends now. I don’t know what the scrap was about – I didn’t get here until was about over – but I know they have patched up the row now and there won’t be any complaints.”

In January of 1929, police arrested Jaeger on a Hollywood Boulevard street corner and charged him with suspicion of forgery after police claimed that he had written bad checks.  Once again, Jaeger’s name was used with caution and it is not clear what happened to him.