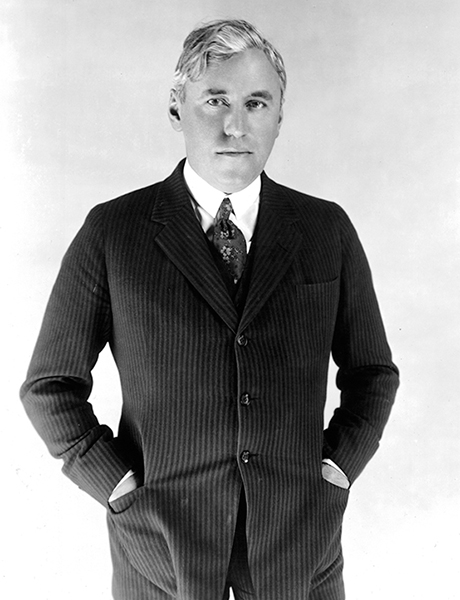 “The way to write a good moving picture comedy is first to get your idea; you’ll find that either in sex or crime. Those two fields are the great feeding grounds of funny ideas. Having found your hub idea, you build out the spokes; those are the natural developments that your imagination will suggest. Then introduce your complications – that makes up the funny wheel. If I could find a writer who could do this with success – that is to say one I could trust to turn out two comedies a week in such shape that I could hand them out to the directors without going over them myself, he could name his own salary. I mean that literally. He could prepare his own salary vouchers. That is how rare comedy writers are.” — Mack Sennett 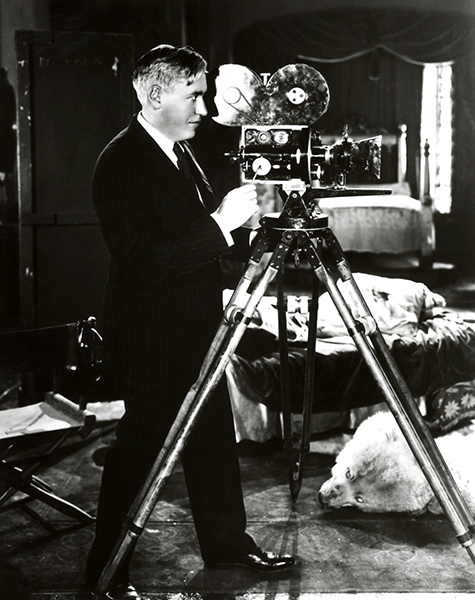 “It is the rarest thing in the world to find a real idea in the mail. If we can find even a germ of an idea in any scenario, we buy it and ask the writer for more. But nearly all those sent to us are merely silly strings of crazy incidents. It is not possible to be really funny without being logical. You will notice in our wildest rough comedies that the story as probability and sequence.” — Mack Sennett 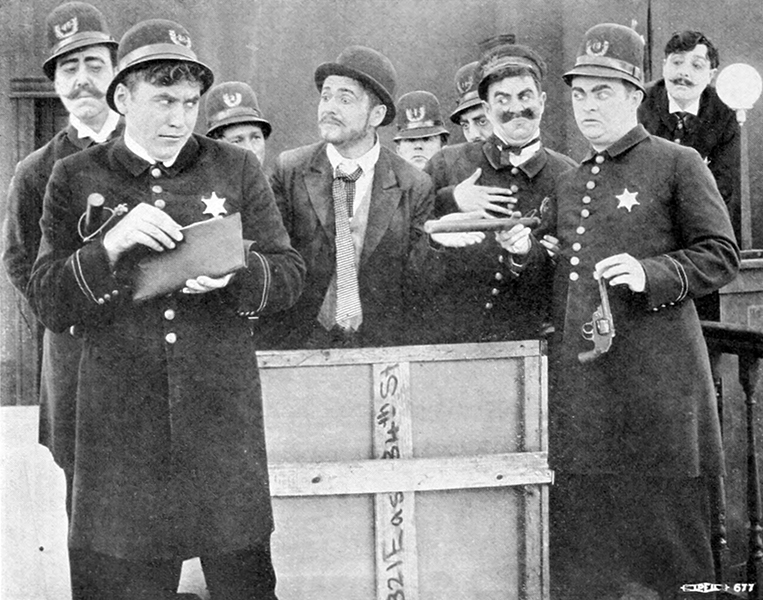 “Good comedies are so rare that even our hired scenario writers seldom turn out a perfect one.” — Mack Sennett 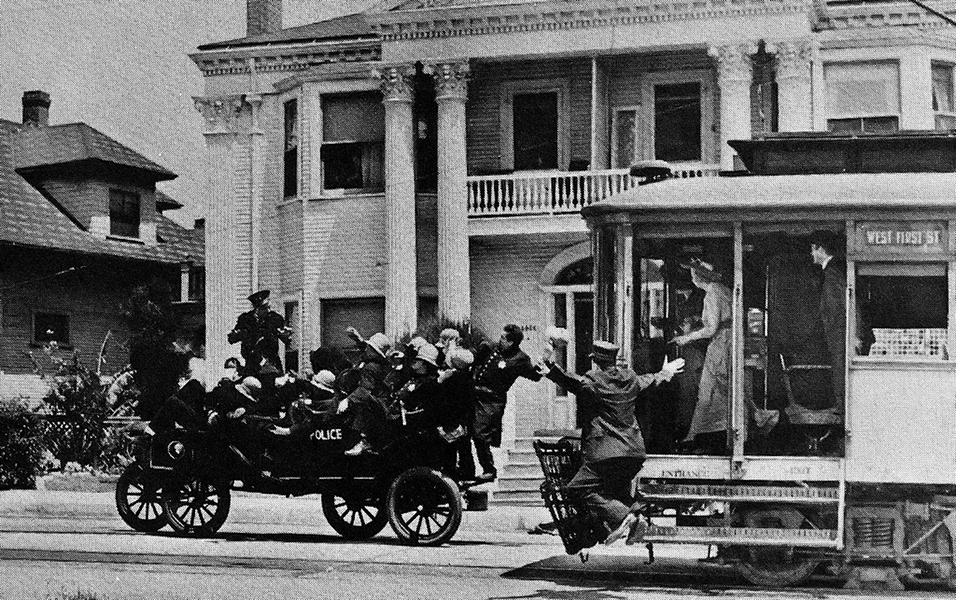 The Keystone Kops in action. 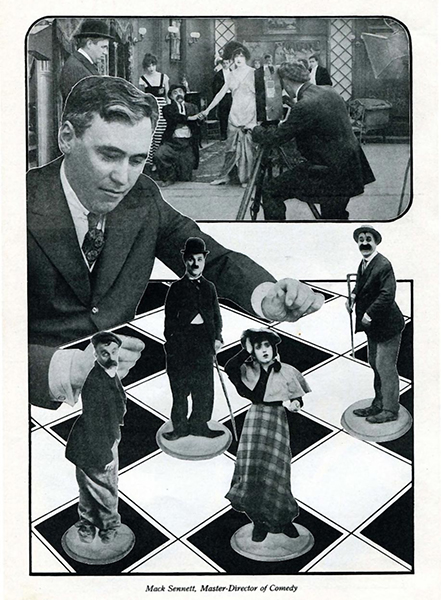 “We have tried famous humorists and I can say with feeling that their stuff is about the worst we get. Every writer to whom we talk about scenarios is very airy and off-hand about it. ‘Oh yes,’ he says, ‘I get you. What you want is just a lot of action.’ Which is just what we don’t want. What we want is a real idea – a logical, compelling idea. We add the action.” — Mack Sennett

“We maintain a staff of picked writers, who, on account of their close relations with our comedians, are better able to fill the requirements of their individual needs than the outside contributors, who do not seem able to comply with our wants, through lack of inside knowledge. This department is under the capable supervision of our managing editor, Hampton Del Ruth, who has adopted methods whereby all submitted matter is carefully filtered through his staff. This policy I have advocated in fairness to the outside writer who extends to us the courtesy of submitting his work for our approval. Our records show a purchase of exactly three scenarios within the last 16 month’s operation. The scenarios, as a whole, remain unproduced, but the vague idea which warranted their purchase in each particular case has been carefully defined and merged to advantage with our own scenarios which later reached production.” — Mack Sennett in 1915

“If you fall down a flight of stairs, you must do so with some degree of naturalness, even though it be uncomfortable. Action that shows anticipation is flat and unconvincing. Everything must be impulsive. I consider initiative one the very essential assets of a comedian – the ability of the actor to take full and instantaneous advantage of every glance and gesticulation of his associate players during the progress of a scene. Given the finest situation that may be conceived, if it not be psychologically reached and artfully cloaked with naturalness, done apparently on the impulse of the moment, the effort is valueless. An intent to make an audience laugh must be obscured, for should they suspect the comedian of the mechanical intent, they would fail to respond.” — Mack Sennett in 1915

“The production of a story having once been conceived is largely a question of technique. Certain rules must be adhered to in the photographic construction. Such technique may be acquired by study. Then humor is an inherent gift. You may explain to an actor how to bring into simultaneous play all the many and varied elements of a comedy climax, but unless there happen to be in his system that indefinable something, he will fail to concentrate on them all at the right moment. Anyone may learn the technical part, but everyone cannot learn the creative part. One may have in his makeup everything but the faculty of discerning the exact moment when to ‘pull’ the big trick. He will lack the possession of the tempo, the speed; that you can’t impart. It is psychological.” — Mack Sennett in 1915

The Fatal Mallet (1914). With Charles Chaplin and Mabel Normand. 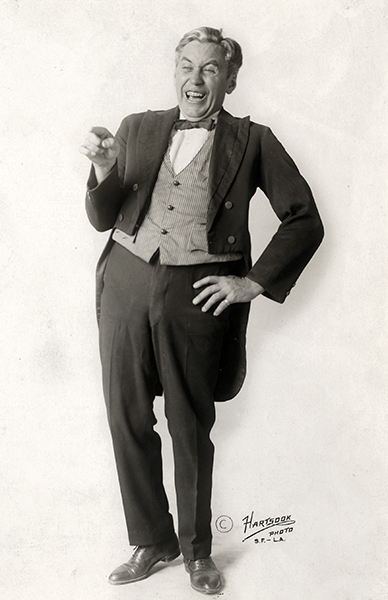 “I never succeeded very well on the stage. I never could agree with the directors. It always seemed to me that they made mistakes in dragging in situations for the sake of getting a laugh. I thought their comedy was too forced. They didn’t let us act naturally. I was glad to go into moving pictures for the sake of trying out my own ideas. They seemed to have justified my complaints made against the directors under whom I worked. If you want to make people laugh – laugh all over – you must convince them.” — Mack Sennett 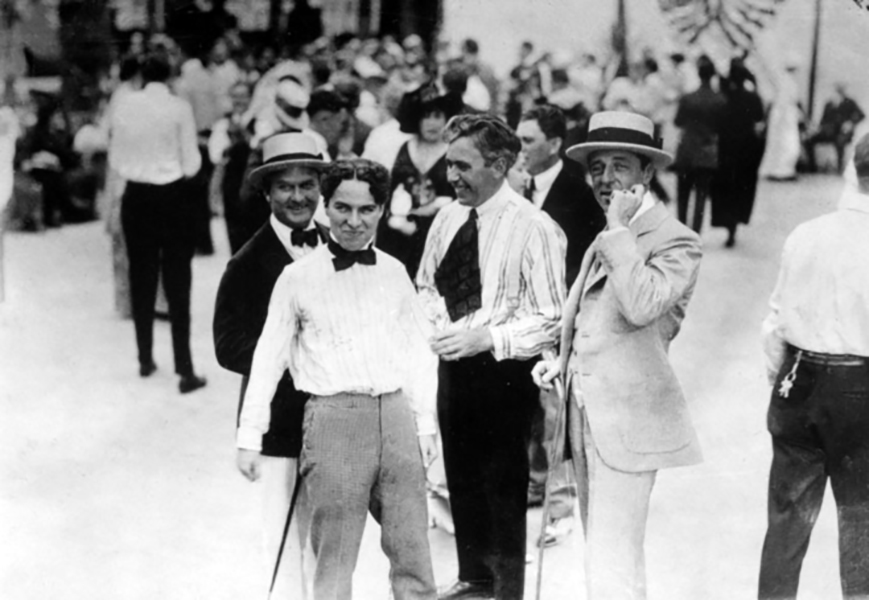 “In the making of a picture, you little realize how hard it is to get a laugh. You may have to strive for hours, but when you get to the real point you just touch the situation as with a feather – make it appear to the audience as a causal incident – that is the secret. In a well-constructed comedy there is running through it some little thing – apparently it is inconsequential, but when the big moment arrives, it is that little thing that precipitates the laugh and brings about the climax.” — Mack Sennett in 1915 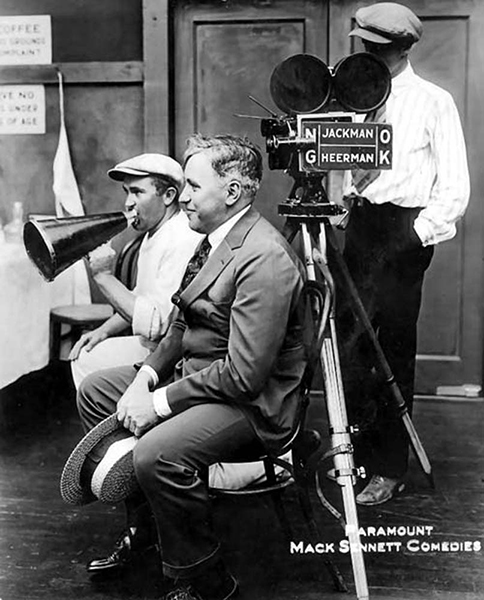 “I always had my crews working on two or more projects. I found the more money I put into writing a picture, the cheaper it was to shoot and the better it came out. The ill-prepared films were the ones that cost a lot of money.” — Mack Sennett 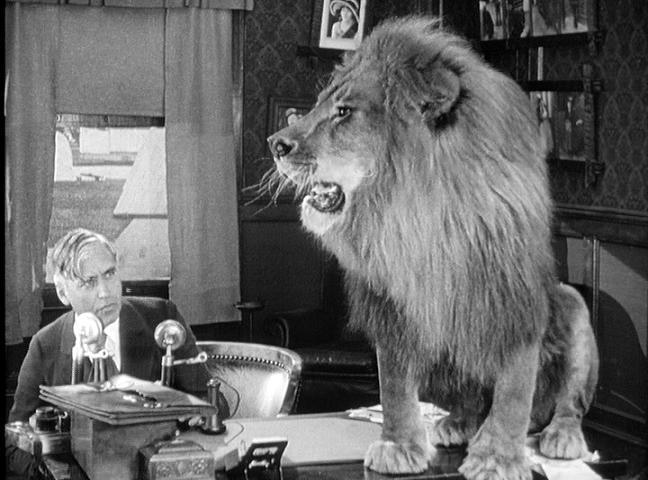 “The secret of [managing a company] is in the doctrine of non-resistance. If you think to yourself ‘I wish this fellow would not cut in on my work,’ you are hopelessly lost. The salvation of your nerves is to surrender yourself to anyone who wants your attention. The reason that people get on the average man’s nerves is that he gets on his own nerves. I don’t get on my own nerves. Impatience or irritability would kill all the pep in sensitive, high-strung people such as I have to do with.” — Mack Sennett 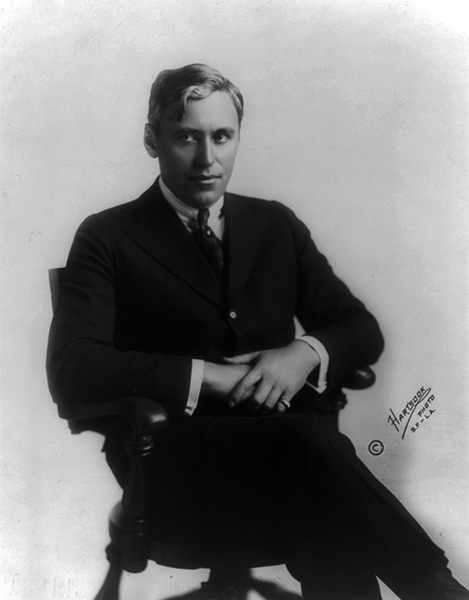 “I feel sorry for the men who are trying to break into the picture game. It is getting harder every year.To begin now at the beginning and come in competition with directors who have learned through long and hard experience will be an ordeal to try any man’s courage.” — Mack Sennett 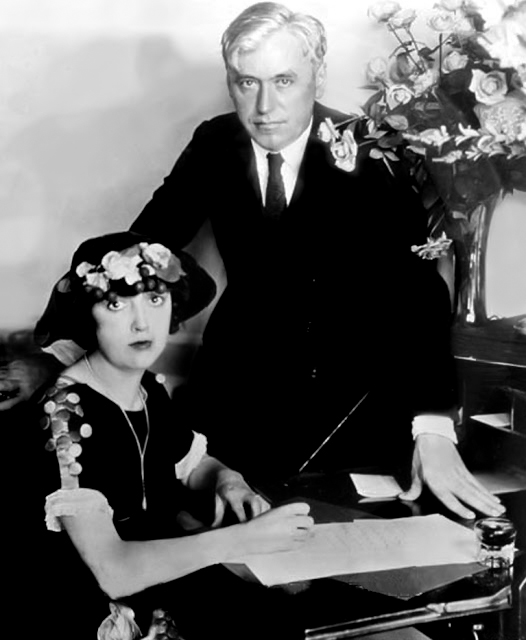 “When Miss [Mabel] Normand first came to my company, she got such a small salary that I can’t think of any word short enough to tell about it. Now she gets the second or third highest salary paid in the picture business.” — Mack Sennett 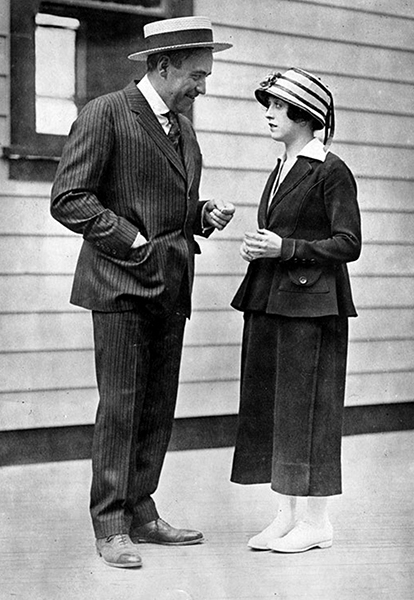 “Miss Normand is such a wonderful success even more on account of her head than her good looks. She is quick as a flash and just naturally funny. She is funny to talk to. She seems to think in sparks.” — Mack Sennett 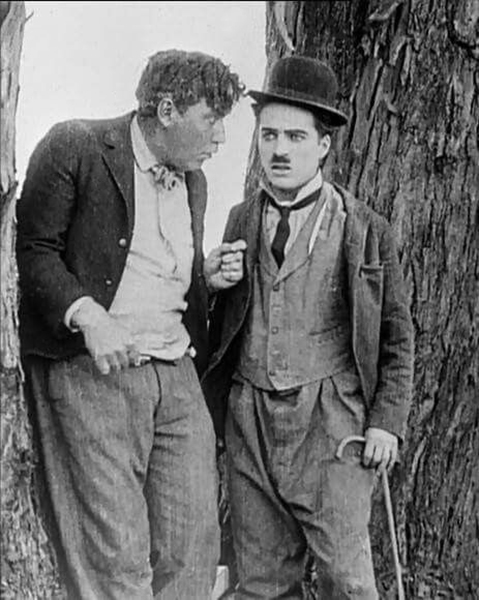 “The great difficulty of mastering the movie picture business is keeping up with incredible rapidity. You can understand how rapid are these changes when I tell you that we couldn’t possibly put over today the comedies we were producing with success six months ago. They made a big hit six months ago but are entirely out of style now. Rough horse play has suddenly vanished form moving picture comedy. The moving picture comedy now demands subtle effects.” — Mack Sennett 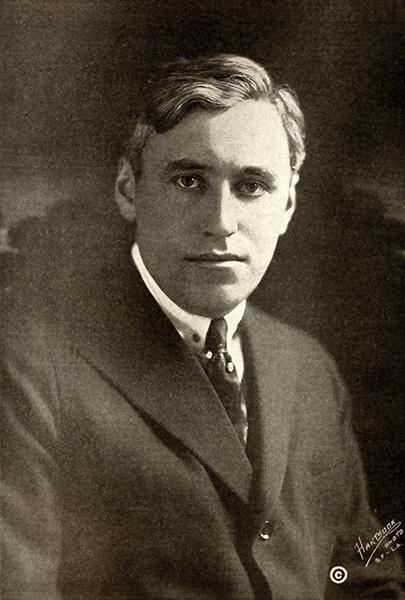 “There is a lot of money to be made in pictures – fortunes. But it takes great judgment and a game spender. No one who stops to think about the cost can ever succeed. The cost is simply not to be taken into consideration.” — Mack Sennett 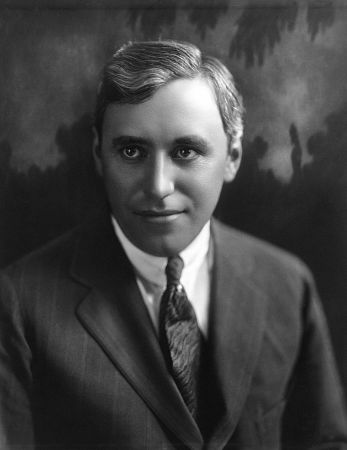 “The moving picture business is the business for a man who is up on his toes and thinking fast.” — Mack Sennett 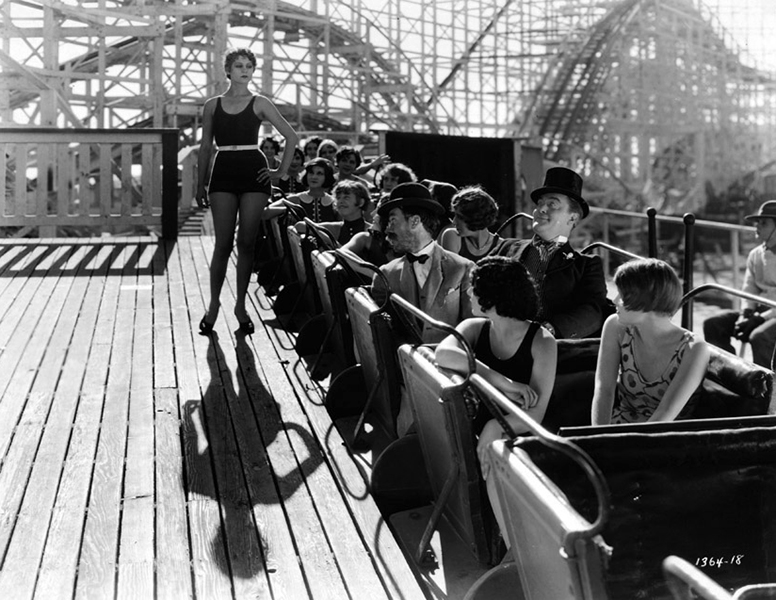 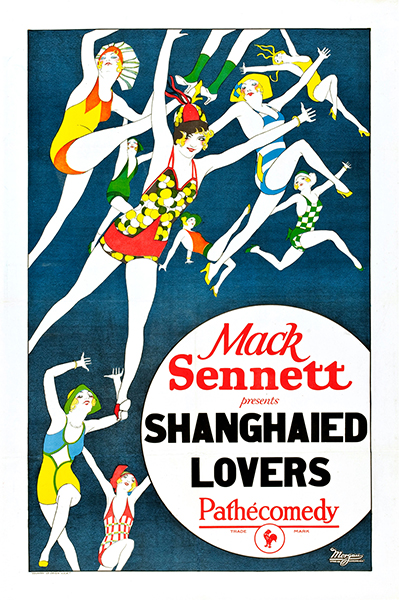