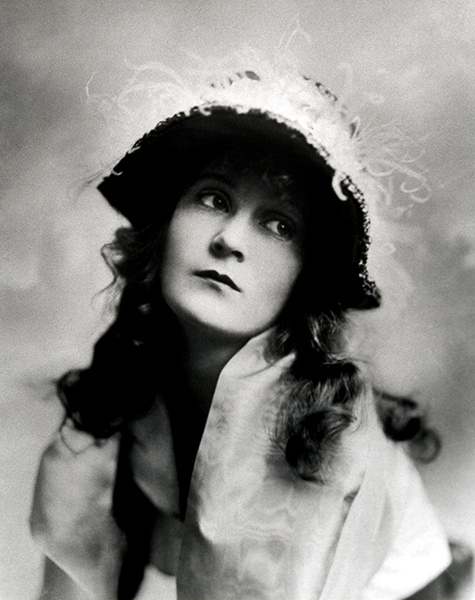 “I had always wanted to act and used to go home and mimic the people I had seen before a mirror. I wanted to be like Lovey, too, but I was an awful gawk I suppose, like most growing girls.” — Mae Marsh 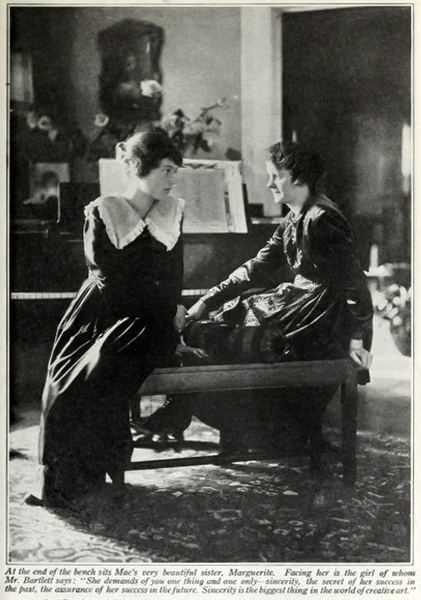 My sister didn’t think that I really had any dramatic talent and I just could not persuade her to take me to the studios, so one day I followed her and got into a quiet corner where I could take in everything, and the first thing I knew Mr. Griffith came over to me and I was so anxious to get a chance to try acting that I quite forgot to be frightened.” — Mae Marsh 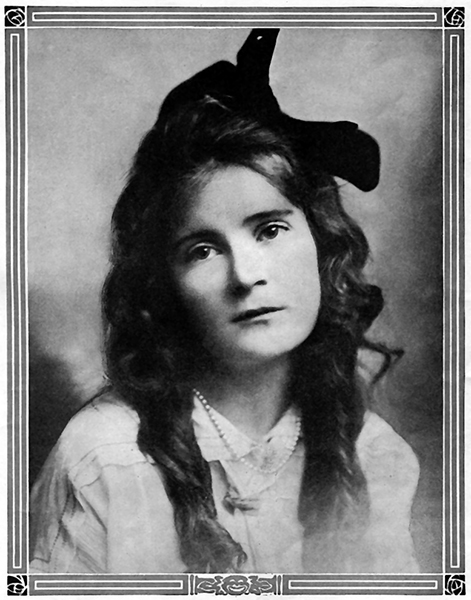 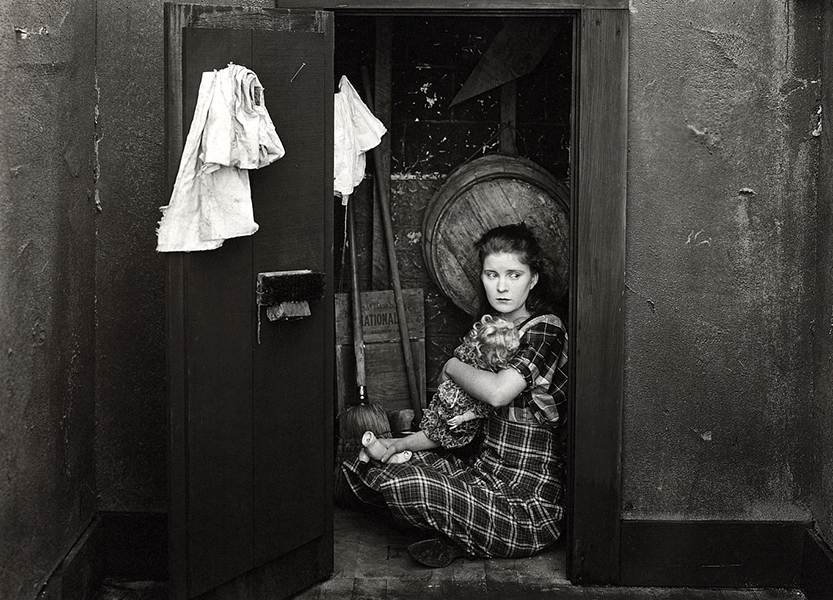 “Do you know, I have gone through a whole lot, for a girl my age. I have had a world of experience – years of it – crowded into one brief month. Our whole family, father, mother, five sisters and a brother came West to San Francisco a year before the earthquake and fire. Oh! I’ll never forget a moment of it! We all managed to get to the street but we were dressed only in our nightgowns. Our house collapsed and everything we had in the world went with it. For a month we lived with hundreds of others in Golden Gate Park. Experience in life? Well, you ought to have been there, and you would got a-plenty!” — Mae Marsh 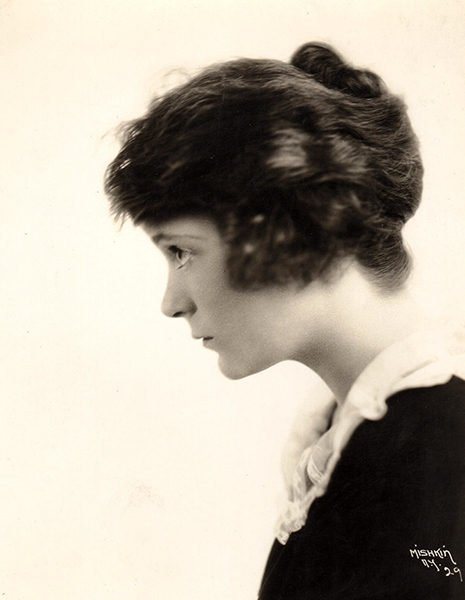 “I just love gardening. I like to get my old duds and get to work and dig and rake and see the things grow. People just don’t know what oranges and peaches or apricots taste like until they eat their own. I love my work and I wouldn’t do anything else, but when I leave the studio I forget it until I go back again. No, I think of how nice the garden is going to look when I get through with it and ‘of the folks inside’ and how good everything will taste to them.” — Mae Marsh 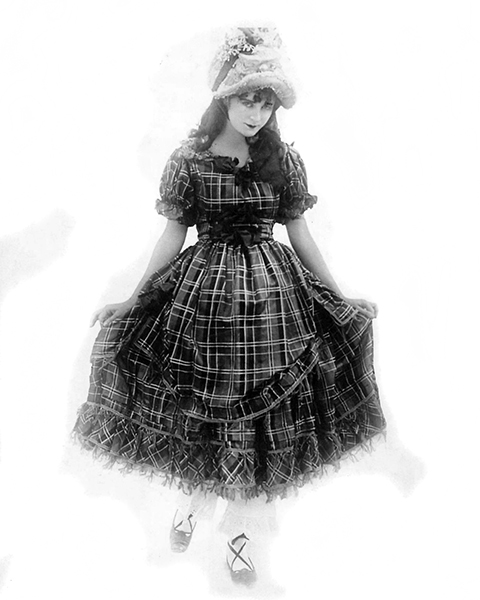 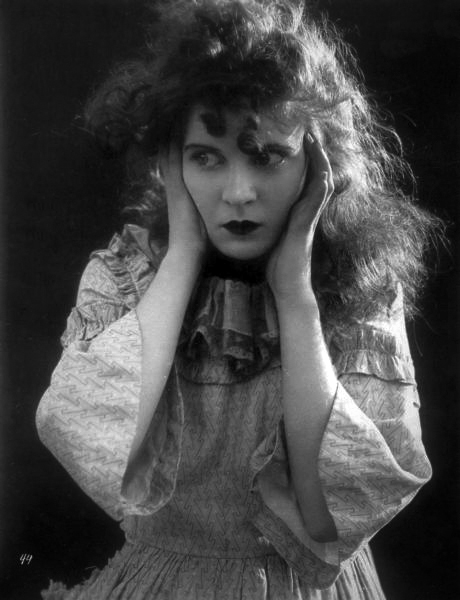 “I suppose that sort of subconsciously I have the idea that I must show a difference in my manner, but I had done so much of the picture work and so thrown myself heart and soul into that it is really difficult for me to separate myself from it.” — Mae Marsh 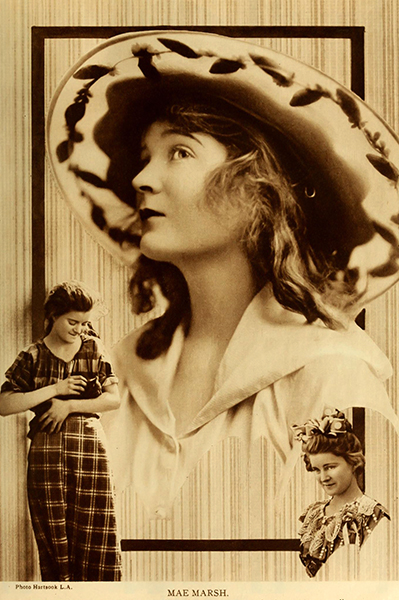 “The most interesting sort of role to me is one that is out of the conventional; that isn’t a type at all, but the exception, and that requires the expression of delicate moods and fixed emotions. That sort calls for every bit of brains one has; it means devotion, patience and unbelievable effort, but one is always stimulated because of the unending difficulties. When you are really advancing even the seeming drudgery is never tiresome.” — Mae Marsh in 1916 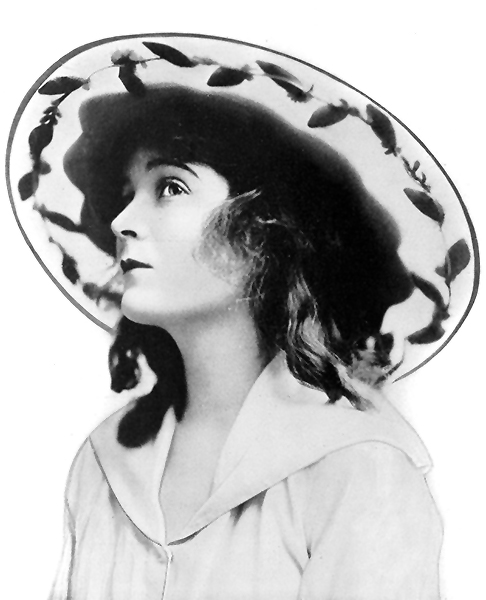 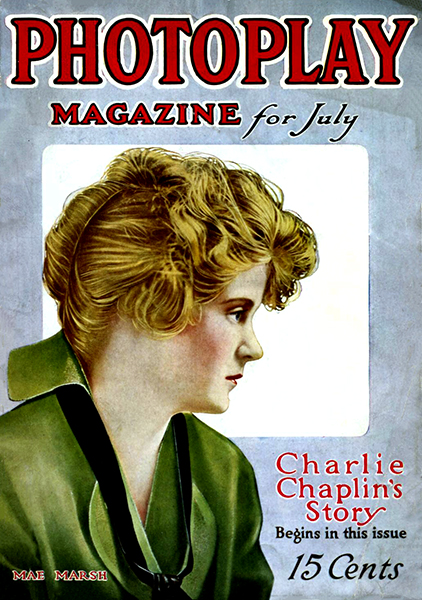 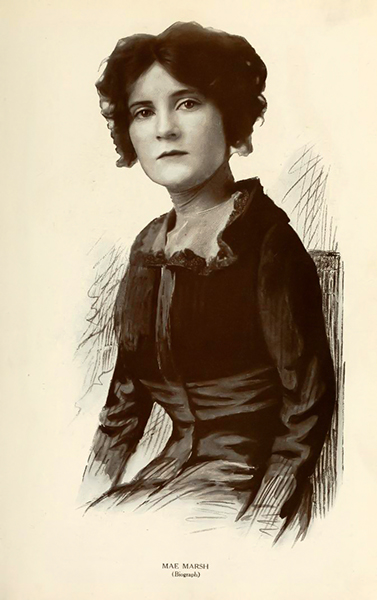 “No, clothes count very little, and looks count less. Of course, no girl seriously objects to looking attractive on the screen, but that does not make success, and there is no real satisfaction in it. The one thing that really counts is the stimulus that comes from creative effort and the satisfaction of having made a vital character really live on the screen so that it reaches out to folks and makes them feel.” — Mae Marsh in 1916 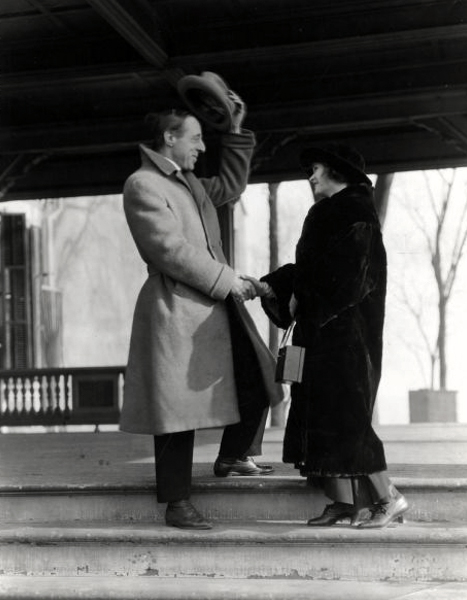 “The pictures have, thus far, produced just one genius. That is Mr. Griffith. He has combined a natural literary instinct that few men ever learned called, ‘Being camera-wise.’ Whatever success I have made is mostly due to his directing. I can’t work with other directors. I feel like a horse with a driver that doesn’t know the road. It always seems so clear in Mr. Griffith‘s mind just what he wants.” — Mae Marsh 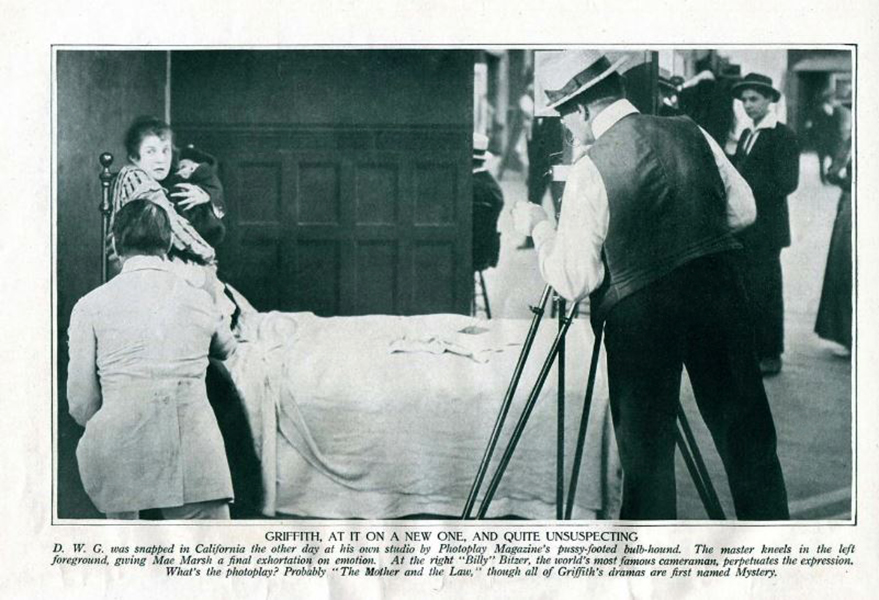 “I can’t recognize myself in any of them. I have seen ‘Intolerance’ twenty times, I suppose, and it never occurs to me that ‘The Girl’ in the modern episode is myself. It is all Mr. Griffith. When I watch her actions I am no more able to disassociate Mr. Griffith from them than I am able to watch the Babylonian spectacles without thinking of him. In his pictures everything – scenery and players – is just so many instruments in his orchestra.” — Mae Marsh

“I guess I never quite got away from the Griffith habit. I mean, he seemed to pervade the entire organization. It is a little curious though – my experience in ‘Intolerance.’ We all felt that Mr. Griffith was so much more interested in the Babylonian part of the picture than in anything else, that it gave me a certain sense of responsibility that I never had before. I am sure I never worked so hard – never put so much of myself into my work, if that’s the way you want me to say it.” — Mae Marsh 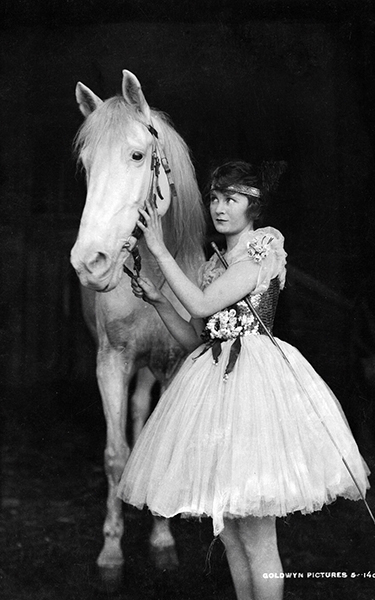 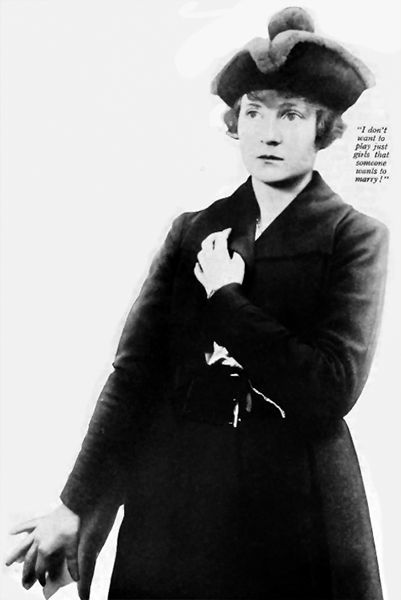 “I don’t want to play just ‘sympathetic ingenues….’ There is nothing to them – no special reason for telling what happens to such characters. I want parts like Applepie Mary in ‘Home Sweet Home,’ or the gamin in ‘A Child of the Paris Street,’ or the boy in ‘The Wharf Rat.’ These are real individuals – not just girls that someone wants to marry, or wants somebody else not to marry, and all that sort of rot.” — Mae Marsh 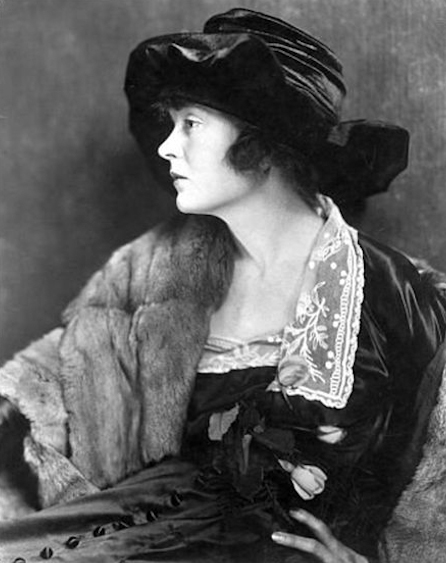 Mae Marsh, famed for her role as Flora, the little sister in D.W. Griffith‘s silent film epic, “The Birth of a Nation,” died of a heart attack Tuesday at her home in Hermosa Beach. She was 72.

Miss Marsh was 19 years old when she was cast in “The Birth of a Nation,” two years after Griffith discovered her watching a Mack Sennett comedy being filmed on an old Biograph Studios’ lot here. He was captivated, he said later, by her “frail, wispy look.”

The petite, auburn-haired, blue-eyed actress appeared in several films before being cast as Flora in Griffith’s Civil War movie. Her famous portrayal of the tragic events in the life of a girl swept into the reconstruction period made her one of the silent film era’s most popular actresses earning as much as $250,000 a year.

Two years after appearing in “The Birth of a Nation,” she starred in another Griffith classic, “Intolerance,” and then left Griffith to become Samuel Goldwyn’s original “Goldwyn Girl.”

Other early films in which she appeared included “Cinderella Man,” “Polly and the Circus,” and “The Beloved Traitor.”

Miss Marsh, who was born Nov. 9, 1895 in Madrid, N.M., attended the Convent of the Immaculate Heart in Hollywood before being discovered by Griffith.

She won the George Eastman Award in 1957, naming her one of the five leading actresses of the silent film era, along with Mary Pickford, Gloria Swanson, Norma Talmadge and Lillian Gish.

Miss Marsh came out of retirement in 1931 to appear in a speaking role in “Over the Hill,” and continued making movies, including several in Europe, into the 1950s. 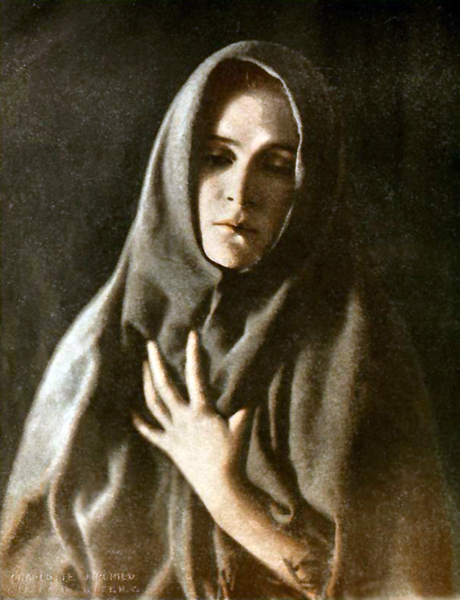 One thought on “Mae Marsh – photos and quotes”