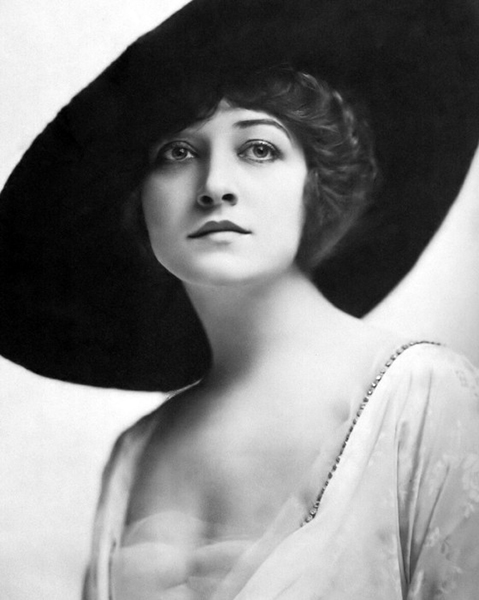 “If I hadn’t gone into the movies, I might never had discovered that a day is made up of morning, afternoon, and evening, instead of afternoon, evening, and night. I never before realized that there was such an hour as nine A.M. I realize it bitterly now that I have to get to the Famous Player’s studio at that hour, but really the acting itself is a lark.” — Pauline Frederick 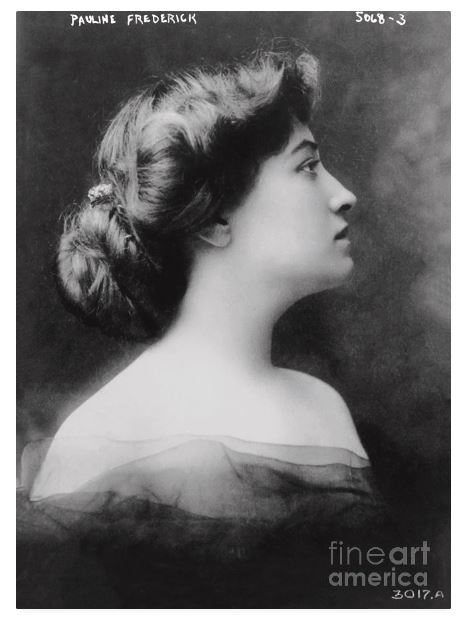 “I made my first appearance on the stage at the Knickerbocker theatre with “The Rogers Brothers in Harvard,” September 1, 1902. My rise was perhaps too rapid for my head, for soon afterwards I found myself rehearsing a small part at the New Amsterdam; and, as a director, in came Mr. Erlanger. The stage manager had told me how to play my part, and notwithstanding Mr. Erlanger’s explicit instructions, I followed my first idea. He ordered me, with characteristic abruptness, to change. Angrily, I made my own interpretation even more marked. Then I think he swore at me – he does at almost everyone, even his friends! – and I ‘sassed’ him. ‘Young lady,’ he said, with a certain ominous calmness, ‘you get out of this theatre – now! And I want you to understand that you can’t have another part on Broadway!’ It was the Emperor of the stage, speaking. I don’t remember just what I said. But my remarks had the desperation of the done. I challenged him by all the stage gods to make good his threat. The others looked at me with the pity that may be in the eyes of spectators at the execution. A few years later after ‘Samson,’ I had charge of a booth at an Actors’ Fund Fair. Along came Mr. Erlanger. I hadn’t seen him since the Battle of the New Amsterdam. ‘Hello, girlie!’ He had the most cheerful sweetness in the world. ‘Well, I see you came right back and horned in, after all!’ Not an incident, nor a particular, ever escapes his mind. I was dreadfully embarrassed. I grew scarlet. He turned to go. ‘I knew that’s just what you’d do!’ he exclaimed, shaking a finger at me. And then I laughed, too.” — Pauline Frederick 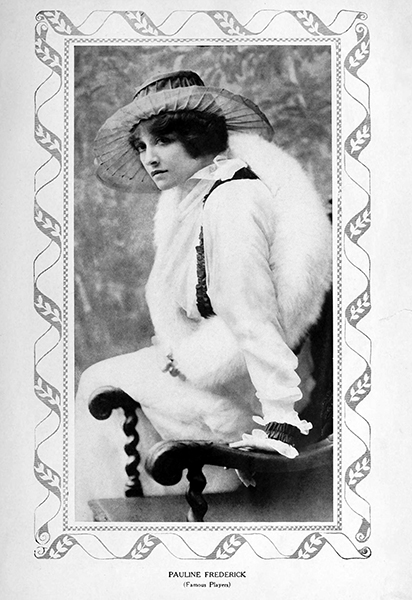 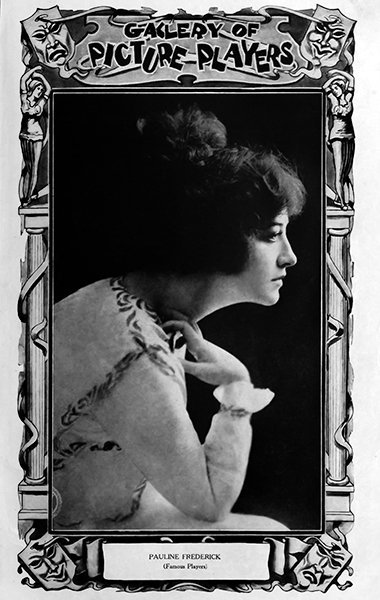 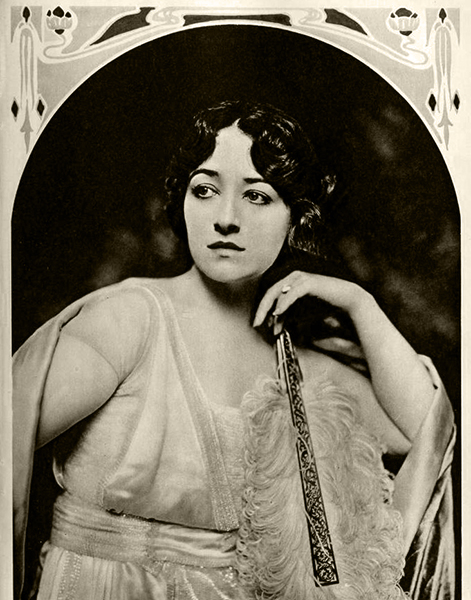 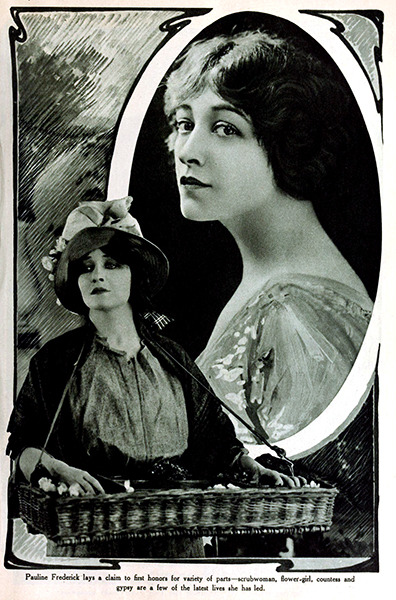 “I hate the movies. For the past eight years, I have been making pictures – almost all of them terrible. When I first went into the movies, I felt that I had found a medium which would develop my acting ability. I wanted the experience, I have always loved to work. I made several pictures that were good. If you remember, in my first stories, I had considerable success. After that, I came to realize that it wasn’t my acting ability they wanted; it was just my name.” — Pauline Frederick 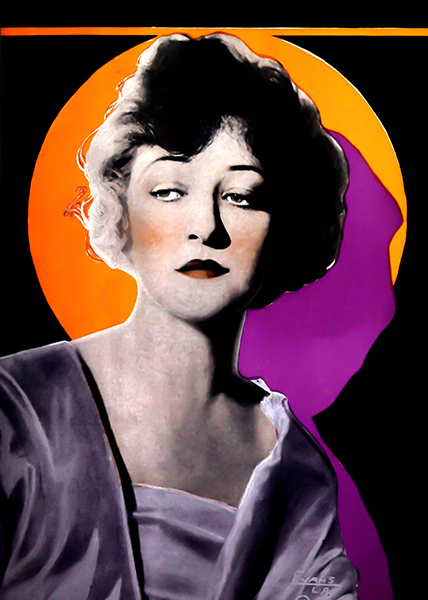 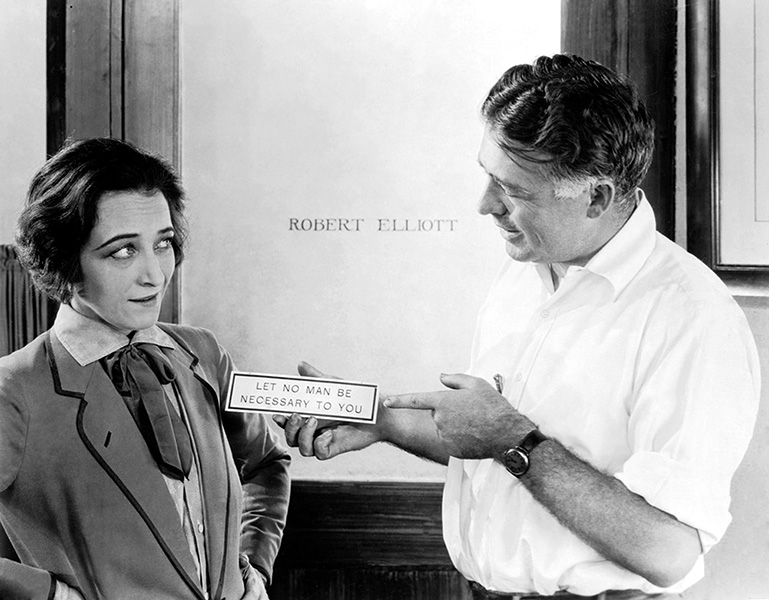 “I’ve been resting on the name of Pauline Frederick for eight years. My stories were terrible. They made me do any kind of story, no matter how bad, because they felt that my name would carry it. They almost had me whipped. I had gotten to a point where  I was ready to quit. I felt that I had ceased to exist, that I was merely an automoton who was being used for her reputation, and that I had better throw the whole thing over.” — Pauline Frederick

Photo: Director Clarence Brown presents a plaque to Frederick on the set of Smouldering Fires (1925). Both stand in front of Robert Elliott’s office door. 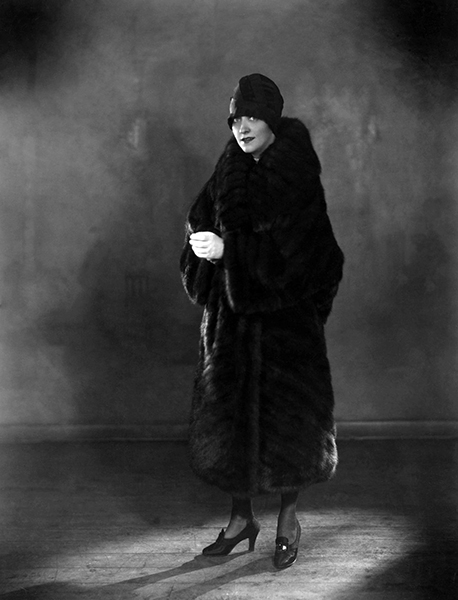 “I’ve got a lot of people depending on me. I found I couldn’t lay down on my job. I was a nervous wreck and ready of a sanitarium. Then I decided to go back to the stage. To see of there was any of the real Pauline Frederick left. To find out if I could act after all these years of waste. I went back to the stage two years ago. It has been my salvation.” — Pauline Frederick