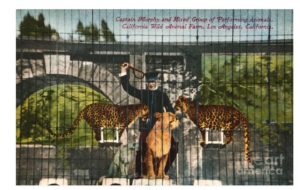 Charles Bernard Murphy was a vaudeville animal trainer who once performed under the name Carlo Bernardi. He eventually dropped his stage name and went to work as a freelance character actor and renowned animal trainer in motion pictures. His film career began in 1910 with the Selig Polyscope Studio in Los Angeles, where he also worked as an animal trainer for the Selig Zoo (California Wild Animal Farm) in the 1910s.

In 1920, Universal Pictures hired him as the superintendent for its Universal Zoo until the zoo disbanded in 1930. While there, he was personally responsible for wrangling Universal’s troublesome lion “Tarzan.” In fact, Murphy was credited with saving actor Charles Bickford’s life when the lion attacked him during the making of a jungle film.

After his stint at Universal, Murphy worked as a character actor/stunt man/animal wrangler in numerous B movie Westerns, especially those featuring Hopalong Cassidy.

On June 11, 1942, while he was driving a a team of running horses during the filming of a Western film outside of Kernville, CA, his wagon flipped over and fatally crushed him. He was 60 years old when he died.