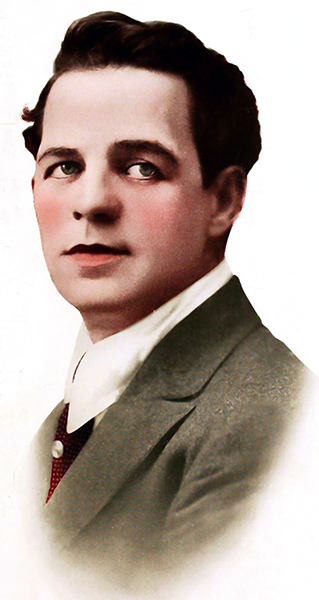 “I was born in London, England, but before I was old enough to become fully aware of the beauties of the largest city in the world, my family came to the United States. So, you see, I’m English by birth only. I’m Californian through and through by adoption, for my parents moved to San Francisco when I was only a few years young. I was educated at Berkeley, a suburb of San Francisco, and it was in ‘Frisco that I received my stage experience. But first, immediately after leaving school, I tried a little bit of everything, in an effort to find my natural bent. I prospected, tried civil engineering, but the minute I first trod the boards (it was with the Belasco stock company, in 1906) I knew that I had found my proper sphere. And I’ve been at it ever since. I have worked with Ye Liberty stock and have played New York and Chicago in a Liebler Company production. I have also had a try at vaudeville, having been twice over the Orpheum circuit in a dramatic act for Martin Beck.” — Edwin Coxen