“A few years ago motion picture producers regarded youth and beauty as the prime essentials to successful film plays. Youth and beauty are glorious things but they have their limitations. Without real ability as an added accomplishment, they can go only so far. Producers of the early days of motion pictures who held to that theory that anyone with youth and beauty could be developed into a star are now robbing the legitimate stage of its great stars. The public demands real acting and the producers are meeting that demand with artists of reputation and proven worth.” — Theodore Roberts 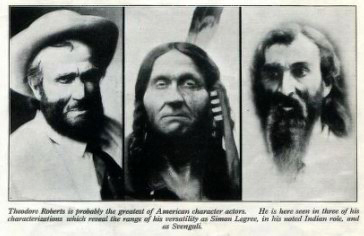 “It is just a year ago since I forsook the legitimate stage. At first, it was rather strange and disconcerting. After years devoted to perfecting voice and articulation, it seemed like depriving a workman of his principal tools. I also found the narrow restrictions of the camera’s vision an annoying feature. I could never tolerate the close proximity of another on the stage with me. I wanted lots of room and needed it because I am a large man. That was the most difficult thing I had to overcome, but I have overcome that as well as other pet aversions acquired in my thirty-five years on the stage. Now, I like it so well that I will not go back to the spoken drama as long as they will allow me to remain before the camera. For one who has knocked about the world for a generation, this is a wholly agreeable life. One enjoys that independence which only comes from living and working largely in the open with the nights you own without restriction. Unless some of our most widely read philosophers are radically wrong. the end of another generation will see me still in the harness.” — Theodore Roberts 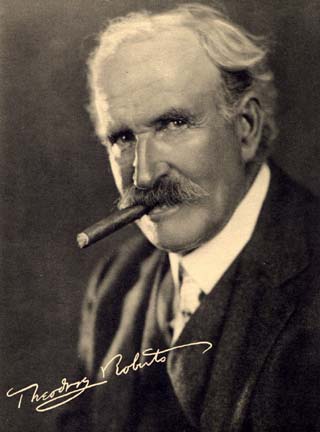