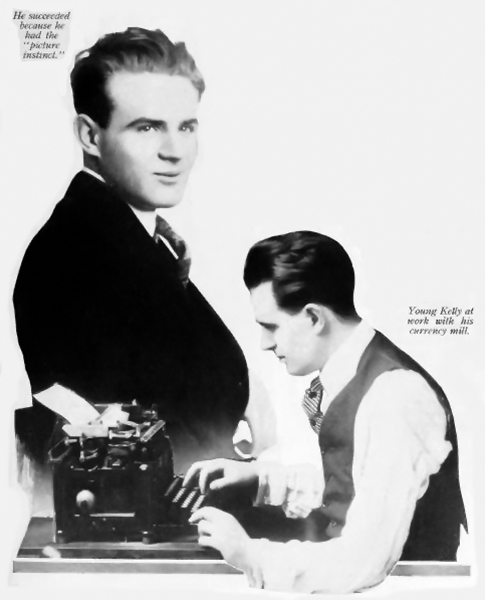 “When I adapt a story or a play, all I am selling is my technique. When I write an original photodrama, I am selling an idea, which, once gone, depletes my stock in trade just that much.” — Anthony Paul Kelly, who went by Tony Kelly. 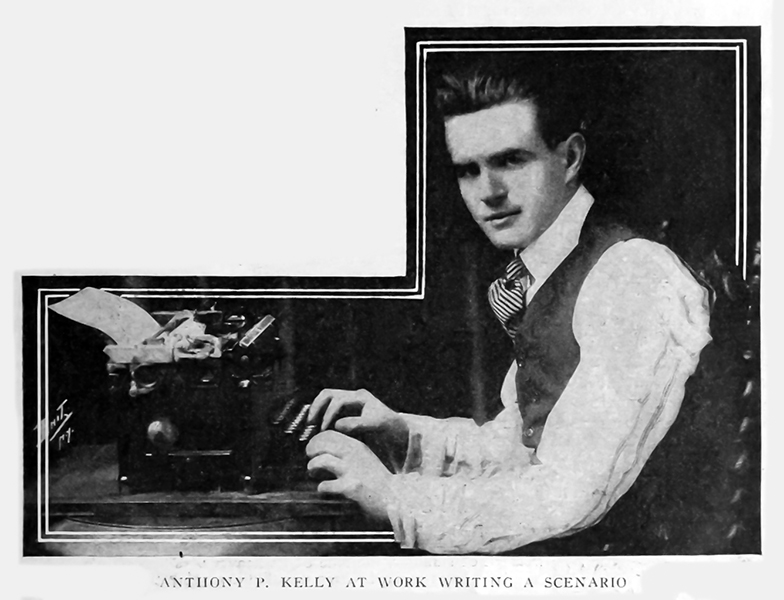 “As a reporter I was a joke. I used to write the most fantastic, flowery stories about the most unimportant incidents. I suppose I had too much imagination. One day, I collected a few fragments of this surplus imagination, tied them in a bundle and shipped them to the Vitagraph. A check came back, and I found that I had turned out a one reel picture story. That was all the encouragement I needed. I set to work in earnest, and I must have had a natural knack, for the checks kept coming with a regularity that was for months, a constant source of astonishment. Since then I have sold scenarios to practically every important producing corporation in America.” — Anthony Paul Kelly

Kelly worked for the Los Angeles Examiner when he submitted his scenarios.  He was paid $25 for every story idea that he sold.

“It is necessary for a producer, especially if he is turning out a regular program, to have staff writers who can be relied upon to deliver stories if the outside supply fail. I have always felt that these writers should not be required to handle contributed manuscripts. Not that they would

deliberately steal ideas – though the temptation to bolster their standing with their employers at the expense of unknown authors must be very strong, when they run short of ideas. Sometimes they seem to come into your head from nowhere, sometimes from a brief newspaper article, sometimes as an absolute opposite of some story in a magazine. When a staff writer has read a score or more manuscripts, and then sits down to write a story of his own, it is quite natural that he may unconsciously adopt as his own, the germ of a plot in one of the contributions he has read. But one of the most frequent complaints from the tyros is that after a manuscript has been rejected, the story has been recognized on the screen. Of course, if it is the same, in detail, it is a clear case of pilfering. But this must be remembered: The moving picture deals with fundamentals. Your story may have dealt with the ungrateful child theme. There is nothing original about that, but the variations are numerous. Yet when you see a photoplay dealing with an ungrateful child, you immediately recognize your own story. The tyro does not realize that everything depends upon the treatment, not how similar his story is to thousands of others.” — Anthony Paul Kelly

“The big future for the scenario writer lies in the study and development of character. It is not sufficient that my subtitle informs the audience that Mrs. Jones is a society leader, and that the actress playing the part wears expensive gowns. My story must make Mrs. Jones’ actions those of a society leader, as different from those of a shop girl as the shop girl’s would differ from those of an immigrant woman, just landed from Ellis Island. They may be ‘sisters under the skin,’ but the motion picture camera cannot photograph behind the cuticle. The great pictures are those which make the sisterhood clear, at the same time keeping the characters different and consistent. The emotion of grief is universal, but the manner in which grief is expressed is personal. The greatest opportunities in the moving picture world are awaiting the author who makes a study of these requirements, This does not mean merely going to picture shows and writing things that are like the ones already done. The author must acquire the true picture instinct. At the risk of being considered high-brow, I would say that familiarity with musical form is quite as valuable as literary ability. In both, the musical composition and the scenario you first must establish an attractive theme, then you embellish it, and, increasing your force and your tempo, work up to a big climax. Tempo is a word that is just beginning to be understood in moving picture by writers and directors. It means the increase of speed as you approach the big scenes. The scenario is developing into a distinct art form. It is because so few understand this that plumbers, lawyers, novelists and others, are astonished at rejections of manuscripts which they believed to be absorbingly interesting and original stories.” — Anthony Paul Kelly