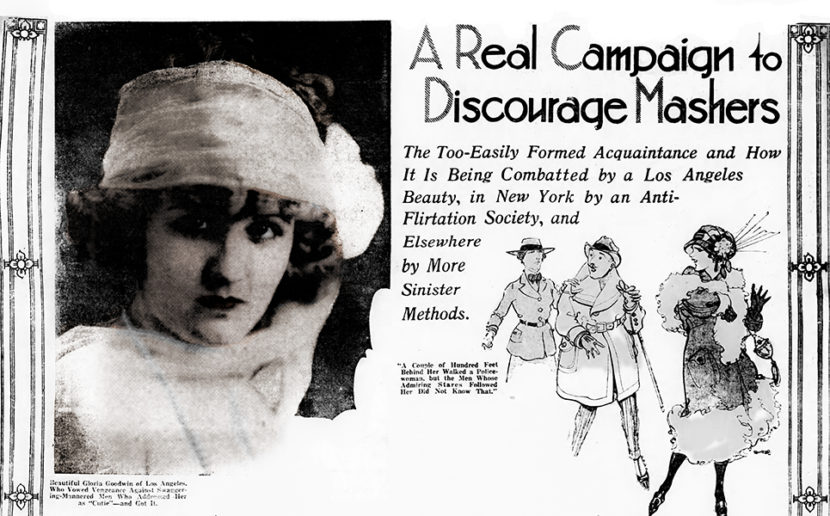 How Gloria Goodwin busted male ‘vamps’ on the streets of Los Angeles in 1922.

For this article, I merged excerpts from The Star Press (December 15, 1922) and The Morning Call (February 18, 1923) to make one article. I am not the author of the article, but I felt that it was important, from an editorial standpoint, to use actual text for clarity and to capture the voice of that era. I edited the material, however, to make it appear as though it was one article. It wasn’t too difficult a task since the latter article lifted much of the earlier article’s material, word-for-word.

It took a girl to sweep the streets of this town clear of male mashers, and that girl acted like a charm. Good reason, too – for she was a charmer of acknowledged ability!
She is Gloria Goodwin, who may fairly be called the Lure of Los Angeles. Tall, blonde, exceptionally attractive, Miss Goodwin is youthful and spirited as she is sensible. Accordingly, when swaggering-mannered men, passing her on the street in the evening, addressed her as ‘Cutie’ and made other advances, she became so incensed that she swore vengeance.
It was about this time that word went about concerning plans of the police for ‘cleaning up’ Los Angeles. Here, ran the thought of the girl who recently was graduated from college, was her chance. She visited the police department and volunteered her services when the most energetic efforts of the uniformed police failed to make the streets safe for unescorted ladies.
Chief of Police Oaks accepted the offer and assigned Policewomen Mabel White and Claudia Proffitt to assist her. The women planned together, and working alone, they came up with a scheme. Goodwin accepted the role of the ‘Lure Which Destroys’ – mashers!
As a result, Miss Goodwin left headquarters alone, trailed by the two policewomen, and as she passed through the brilliantly-lighted streets of the business district her beauty made her an instant target for masculine attention. She moved casually toward the residence section, where the streets were not so bright.
‘Where are you going, Cutie? Want to take a ride?’ Those were queries shot at her again and again from the depths of limousines and roadsters and touring cars and plain flivvers that ran slowly along, as if waiting for someone. Police described it as a case of competition on the part of the mashers (also called gashawkers), who vied with each other in their efforts to entice one or more of the girls to enter the waiting automobiles.

A middle-aged man, who had the appearance of one well established in the world of business was the first to be arrested. He sauntered slowly around the telephone building as though waiting for someone.

Miss Goodwin, with two officers trailing 100 feet behind her, was the first to be accosted by this middle-aged masher. As she passed him, walking rapidly, he raised his hat and bowed. He mumbled something which she nor the officers could distinguish.

Miss Goodwyn walked on. Mrs. Proffitt and Mrs. White, the policewomen, then walked past the man. When near Mrs. White he gave a forced cough. He raised his hat to Mrs. Proffitt.

Then before the officers realized it, this middle-aged man had two girls in tow. He walked rapidly away with them. The policewomen followed and detained him. His explanation was that one of the women was his wife, that they had been married five years and that he had been waiting for her and her chum. He was only the first of the nineteen arrested that evening.

Several other mashers, all conducting themselves in a like manner, were picked up around the telephone station and on Seventh street near South Rampart. Each made advances to Miss Goodwin and to the policewomen.

The next night, between 9 o’clock and midnight, twenty-four mashers fell into the hands of the officers. The assortment was much the same as that of the first night of the drive, when the Westlake district was the scene of the operation. The 24 men who were caught actually accosting women or girls on the streets varied in age from 18 to 50 years.

The business section of Hollywood and vicinity of the moving picture studios were visited first. Eight of the 24 mashers apprehended were found in these districts. Leaving Hollywood the officers went again to the Westlake district for a survey and to note what effect the drive which started in that district had brought.

The masher was not as much in evidence in Westlake as he had been the previous evening when the drive opened. Only six men, three of them were youths, were taken in this district.

More than half of the 24 arrested men were married, they stated. Several of them pleaded that their arrest and the resulting publicity if their names were made known, would ‘ruin their lives.’

‘Think of that next time,’ said Sergt. Norgaard.

They all vowed that there would be no ‘next time.’

‘Bring them in from now on!’ was the order of Chief Oaks. And pretty Gloria Goodwin is going about the work of luring mashers from the streets of the California city.
Liked it? Take a second to support Bizarre.Los.Angeles on Patreon! 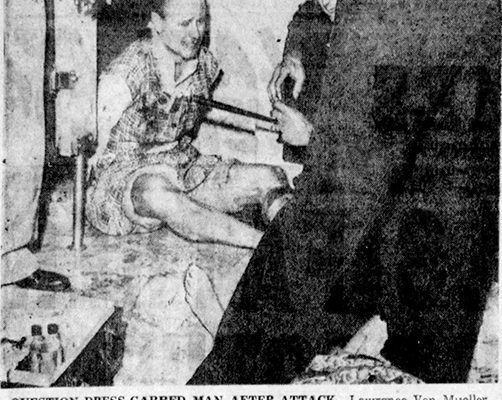