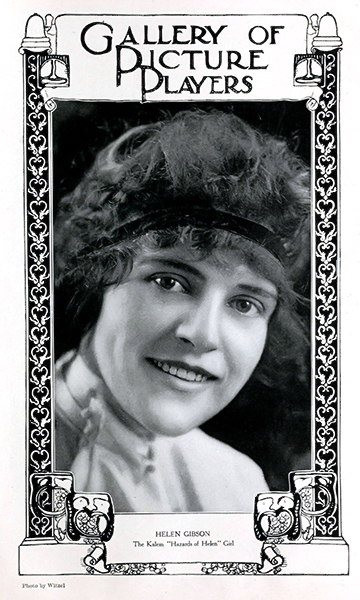 “I have heard that they call me ‘The Girl with Nine Lives.’ Well, if the description is right, I am pretty certain that I have lost eight of the nine already, for it is a rather weird coincidence that in my career as the ‘hazardous Helen’ there have been just eight occasions when I really did come within a fraction of an inch of losing my life. But I am not afraid; I am just going to keep on carrying out the actions of thrilling scenarios. Only I hope the ninth extra narrow escape is a long, long way off.” — Helen Gibson 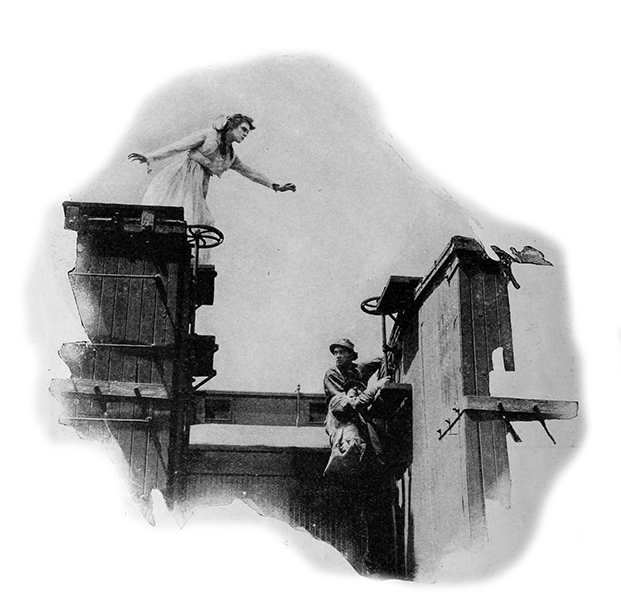 “The one narrow escape that will always remain in my mind occurred when I was called upon to jump from the top of a railroad station to the top of a train that was speeding by. Of course, you can easily see that we are not able to rehearse the thrill scenes of the ‘Hazards’ very thoroughly, since once is enough for anyone to perform most of the deeds. I had measured the distance from station to train very carefully, however, and had tried the jump with the train stationary. Then, when I told the director I was ready, the camera was placed in position, and the train went a great distance down the tracks and prepared to get up speed. You can imagine my feelings as the train came rushing toward me. I had to calculate the moment of my leap to the fraction of a second, for a miscalculation would send me between the cars of the train. When the right moment came, I flew from the station and landed squarely atop the train. I had calculated the jump correctly; but the sudden shock of landing on a speeding train was greater than I had imagined, and before I had secured a grip on the slippery car-top, I had rolled to the end of the car. The next second I felt would send me to eternity, but just has half my body had fallen between the cars, I secured a firm grip on one of the small air transoms that you see in the top of the car. In what seemed a terribly long time, but was really only a minute, the train had been brought to a stop. The director was running about, half crazy by this time, and the camera man told me later that it was sheer force of habit that kept him turning the crank, for his wits had completely deserted him. We certainly were fortunate, for the camera got it all.” — Helen Gibson 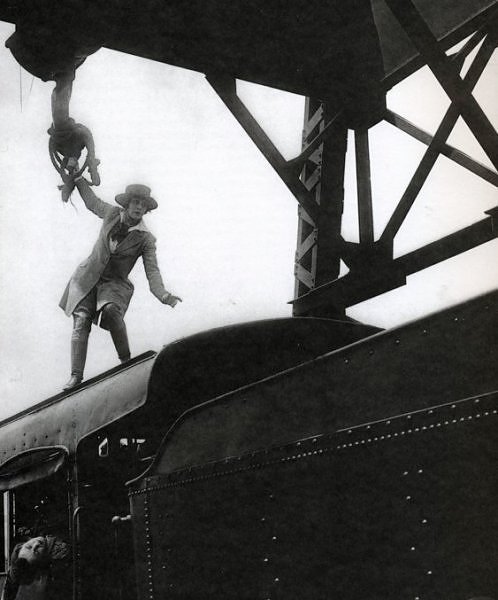 “Another thrill that almost tore my nerves to threads, if I have any nerves, was the drop form a railroad bridge to the top of a speeding train that was going under the bridge. I also remember well the time when, riding on the coweatcher with another player, I had to lift a man from the tracks before the locomotive, I really that that was among the worst of my experiences, for, besides myself, I had also to consider the lives of the other players. You can be sure that hair all but stood on end while we were holding the player for the few minutes that elapsed before the train could be brought to a stop. We had to go a certain distance to carry out the action of the plot. Narrow escape number eight had come in the same picture a few minutes earlier, when I had walked along the runway of the locomotive to get to the coweatcher. In rounding a curve, I very nearly lost my balance on the narrow perch. Number nine? I don’t know when it will come, but I’m not worrying. As long as the fans want railroad pictures I’ll keep on taking risks playing in them.” — Helen Gibson