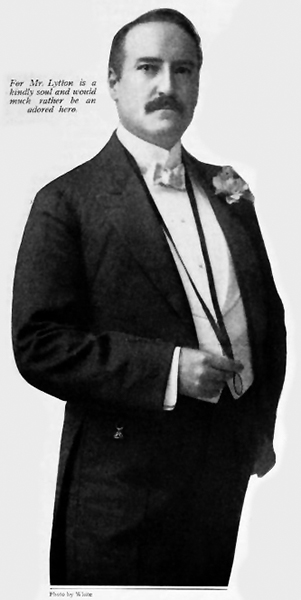 “I went to the Vitagraph studio on appointment with Mr. J. Stuart Blackton. I was told he would see me ‘presently.’ I waited three hours, and then took my courage in my hands and went into the inner office. Mr. Blackton was pointed out to me, and as soon as he had finished a conversation with another visitor, I introduced myself. We had quite a chat, and then he said: ‘What a pity you were not here sooner. I have just cast an actor in a part that would have fitted you admirably.’ ‘But I have not just arrived,’ I told him. ‘I have been waiting three hours.’ That seemed to impress him, and summoning a director he told him to take the other actor out of the cast and put me in – presumably actuated by a sense of justice. From that time I was a regular member of the Vitagraph company until I resigned five years later. The moral of this is the element of chance that enters into success.” — L. Rogers Lytton