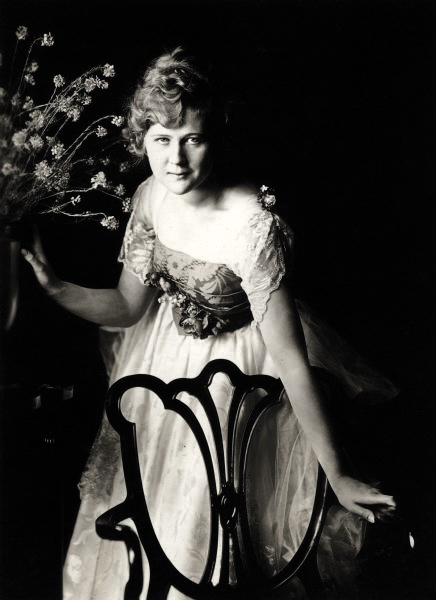 “My first stage experience? There were no theatrical people in our family. All my people were church people. Then father died, and my sister went to New York. She sang nicely, and had hopes of obtaining a place in a choir. But she found such positions scarce, and when she had a chance to go into the Winter Garden chorus, she took it. I was at school in a Virginia convent then. One Christmas, I came home for the holidays and we went over to New York to see my sister. Down in the convent, I had wanted to be a nun, but the moment I got inside that dressing room, I knew it was my official home. Finally my sister got me a position in the same show with her. Another sister remained at home with mother. The sister who was in the chorus with me fell in love and married a Pittsburgh man. Then mother met with financial reverses, and it was up to me to help support the family. We came out to California on account of my younger sister’s health. I brought letters from the east, and Mr. Morosco engaged me at once for ‘Nobody Home.’ And there you have the ‘cut-backs’ of my life.” — Mary MacLaren 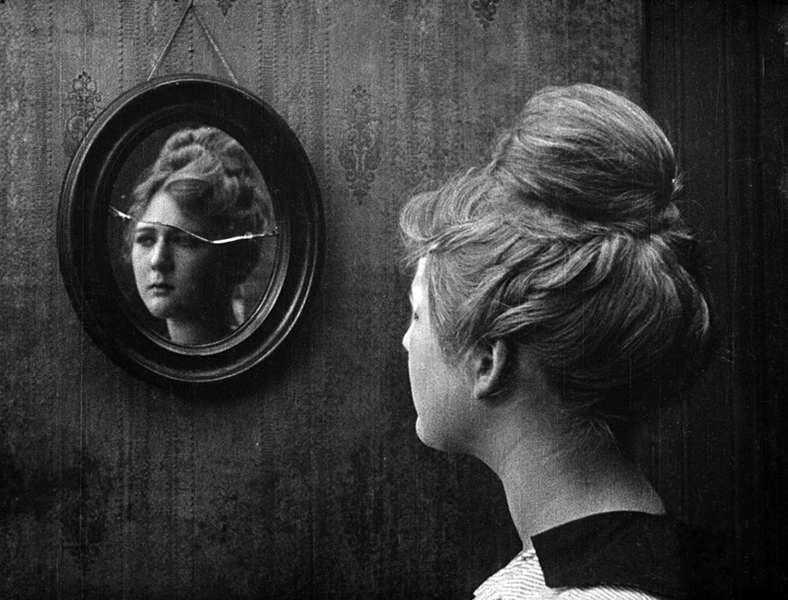 “Well, I don’t think I was ever discovered. I think I just happened. You see, when musical comedy left the Morosco theater I had nothing to do. I had no money to go back to New York, and my mother and sister were practically dependent on me. One day a friend took me out to Universal City, and introduced me to the Smalleys, but I think they both forgot me at once. I went home rather discouraged. Later I got work at the Universal as an extra girl. Our little stock of money was gone pretty fast. We were really almost in want sometimes. So far as my shoes were concerned, though I never put pasteboard in the soles of mine, I did get to the point where I painted my shabby dancing slippers over and over again with oil paints, in different colors, each time a darker shade. We lived in a very tiny flat indeed, and mother did every bit of the work, assisted by my sister, and made my clothes. Then one morning, – I remember it was a brilliant day in May, – I was standing and watching the Smalleys direct a scene. I was feeling very blue despite the beauty of the distant mountains and the greenness of the nearby hills and the sunlight over everything. I had walked from home to Universal City to save my bus fare that morning. I think my dress was a little shabby, and I daresay I looked woe-begone enough. Anyway, Mrs. Smalley was talking to Mr. Smalley, and she happened to look over at me. I heard her exclaim: ‘Shoes!’ I looked down at mine. They were very neat and presentable, – I had just cleaned them nicely that morning, and I couldn’t imagine what she meant. Mr. Smalley looked over at me then. He recognized me. He came right over and began to tell me of a wonderful story that he and Mrs. Smalley had discovered in Collier’s. They thought I was exactly the type. They asked me about my work and my experience, and they they gave me the story to take home and read. That night I sat up late. I read and re-read that story, until I felt that I was that very girl. The next morning, I met Mrs. Smalley and we talked some more. She was very kind and lovely to me. She put me very much at my ease about the part, which is one reason I never was a bit nervous in any of the scenes. I felt every one of those scenes, and someway Mrs. Smalley knew exactly what to say in directing, so that I was able to express the way I was sure the girl in ‘Shoes’ felt. Ever since ‘Shoes,’ I have loved to play poor girls. I didn’t care a bit for my elaborate dresses in ‘Saving the Family Name.’ My sister said I revel in rag-bags!” —  Mary MacLaren 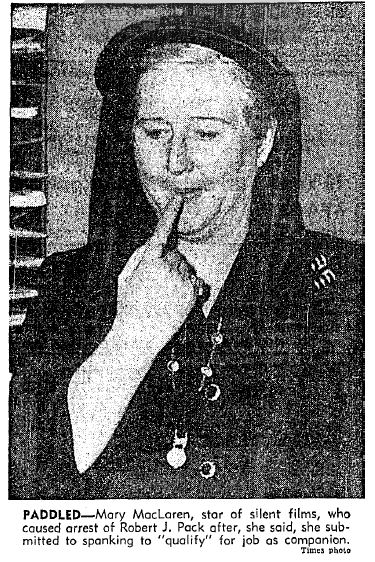 THE LOS ANGELES TIMES, July 24, 1951. Mary MacLaren, star of the silent screen, made a personal appearance last night at the Wilshire Police Station to sign a complaint against a man who offered her a job.

Miss MacLaren, who runs a boardinghouse at 127 N. Manhattan Place, told police she placed an advertisement seeking employment as a companion. The ad, the actress said, contained her phone number.

Early yesterday afternoon she received a telephone call from a man who gave his name as Mr. Bickford of Beverly Hills.

“He offered me a very good job,” she said, “board and room at his country estate, 18 miles from Glendale, clothing and medical expenses, plus $175 a month.”

The actress, who said she found this much of the offer “very attractive,” went on to tell the rest of the offer.

It seems the wealthy Mr. Bickford had a daughter, Bobbie, 14, whom he had to spank when she was bad. The actress, to qualify for the job, would have to submit to a “test spanking” to be sure she could fit into the routine of the Bickford estate, he said.

Miss MacLaren called the police after first making an appointment with the man. Sgt. William McFarland hid in a closet at her home. After witnessing the spanking administered to Miss MacLaren, he arrested Bickford, who turned out to be Robert J. Pack, a salesman, who lives at 729 Union Ave.

Pack was booked at the City Jail on a morals charge. 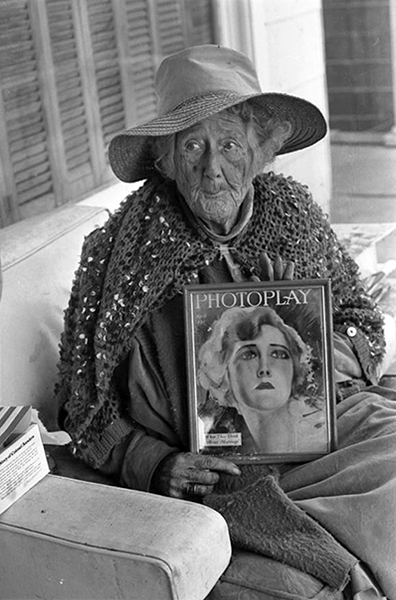 Former silent film star Mary MacLaren at her home in 1979.

To give some idea as to what her life was like in her final years, the following info was pulled from her 1985 obituary in the Los Angeles Times:

Six decades ago, when Miss MacLaren was a striking beauty, her face adorned the cover of Photoplay magazine and she was romanced on the silver screen by the likes of Lionel Barrymore and Douglas Fairbanks Sr.

But the old star ended up alone, living in two rooms of a once-grand house on North Manhattan Place near Beverly Boulevard she had bought in 1917 with her movie profits from such films as “Shoes.”

In 1979, county officials tried to declare her incompetent for living amid too much clutter and too many pets.

But the spunky Miss MacLaren rallied the important and the nostalgic alike in a town that sometimes turns a cold ear to the downtrodden. She was a bit of show business memorabilia that few could ignore.

When county officials sought to gain conservatorship over Miss MacLaren‘s finances–claiming she was living in “submarginal conditions”–amid dogs, cats, Kentucky Fried Chicken boxes, flies and pigeons–the Superior Court commissioner called her “a delightful lady” and ruled she could manage for herself.

During those lean days, the old star was reduced to selling off treasures, such as an autograph from Charlie Chaplin, which brought her $120. The inscription read, “to an old, old, old friend.”

At one point, Miss MacLaren fell victim to a self-styled “bishop” and part-time hypnotist and magician named “Rev.” James Griffis, who moved in and tried to take control of the rambling home and its decades of memories.

But the old star fought on.

Miss MacLaren won a court battle and Griffis moved out and the aged actress continued to live in her beloved surroundings until 1983, when the home was finally auctioned off.

Before long, Miss MacLaren moved into the convalescent home, where on Sunday acquaintances described her as “a lovely, lovely, lovely lady, just as sweet as could be.”

Author Anthony Slide had this to say about her:

A visit to Mary MacLaren was certainly an experience. One sat down gingerly on the decomposing couch on the front porch, wondering what it might contain that was still alive. It was difficult to get her to talk about films when her current interest was astrology. A trip inside the house could prove horrendous. The stench of cats was pervasive, and one stood by silently as Mary showed you a room whose sole and permanent inhabitants were those kittens. Stray dogs and cats and stray people gravitated toward Mary. The animals were relatively harmless. The people less so: she recounted stories of one female lodger who tried to force her to eat poisoned pancakes.

A strict vegetarian, lunch was a baked potato and a cup of tea at the local Sizzler, and afterwards, Mary would stand outside and feed the pigeons, much to the irritation of the restaurant management.