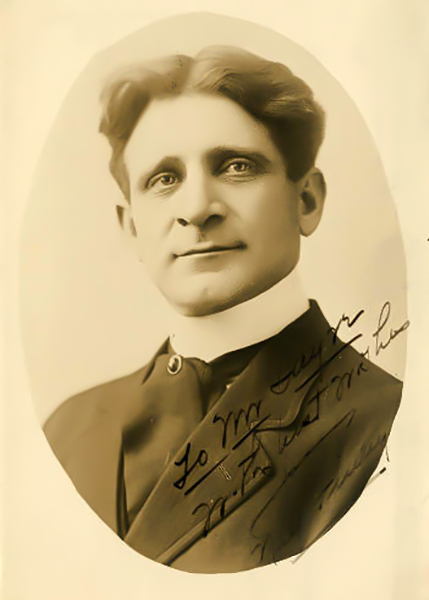 “You know, most anybody can be nice, but you’ve got some work ahead of you to make everybody in the audience honestly hate you. The villains generally have the best acting parts in the story. They make the situations for the hero-boys, and make them stand out. If you want to see a leading man lose his goat, just put one of these milk-fed villains in the cast. I have been treated mighty rough by some of these red-blooded heroes, but I’d rather get a punch on the jaw from a regular fellow than a slap on the wrist from one these cute Willy Boy leading men.” — Ned Finley 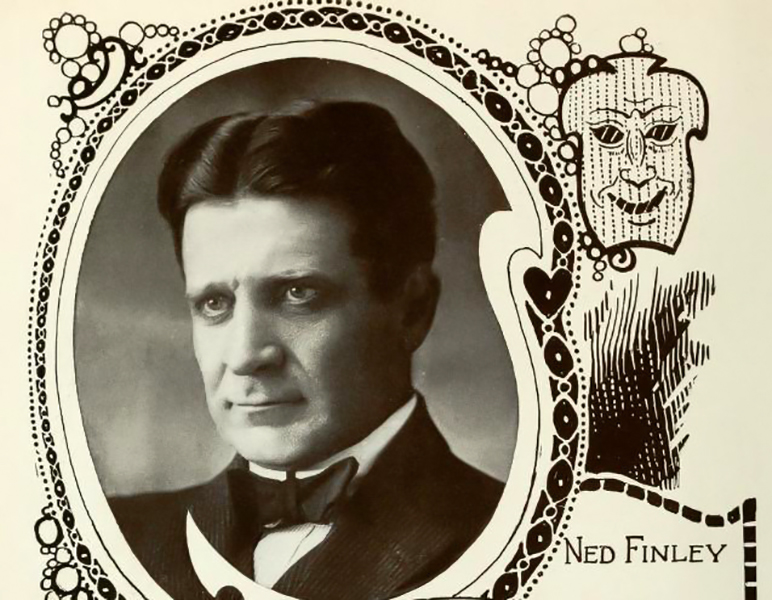 “I’ve been making a study of human nature these many years, and what success I have made in my character work is from association with all kinds and classes of people. I’ve hobnobbed with the country’s best known financiers, and captains of the industry; also I’ve been pals with the lowest types of dope fiends. I’ve been everywhere there is to go; been a tramp nearly all my life – not exactly the boxcar variety, but tramp nevertheless. I’ve been around the world seven times; have gone abroad in the cabin deluxe, and peeled potatoes on the same boat, to get back to America. I’ve lived the whole route from doughnuts to terrapin and from park benches to the Waldorf.” — Ned Finley

“There’s a bakery on 8th Avenue, near 38th Street, where a bunch of us broken actors used to eat (when we had the price) – got a big slab of coffeecake and coffee for a nickel. One day, I measured the cake, and, as near as I could figure, I had eaten enough to pave Broadway from the Battery to 135th Street, including curbs. But I always kept a good front. It was sure some joke to have seen me on Broadway in the old days with an English walking suit on, twirling my stick and with a cigar butt that had been working two weeks. It’s a good thing the wind never disarranged my coattails or I’d sure have been arrested. You know, there was no picture work to help through the summer then, but there was Coney Island. I was in the San Francisco earthquake show in Dreamland one summer, but I was one of the stars. Four of us got $15 a week and about 60 more got $10. Never had to do more than 15 or 16 shows a day, 25 on Sundays and holidays and a ballyhoo parade around the park between shows. Coney was a lifesaver for many a tramper.” — Ned Finley 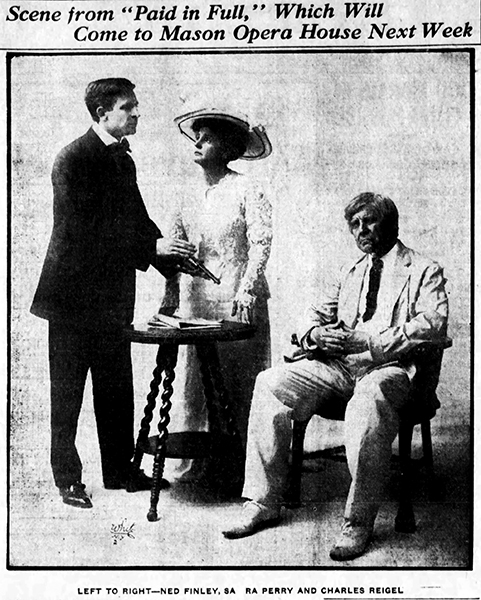 “It’s not so long ago that I was broke in Philadelphia. My credit was good at the old Hotel Continental, but I hadn’t a cent. One day, I heard the boss of a milk route firing a driver. I butted in, got the job and was told to report at the barn at 3:30 am. I borrowed a dime from the night clerk for carfare and sat up till time to go to work. As a milkman, I was a howling success; got a raise each of the four weeks I was there. Then I had to quit and come to New York for rehearsal for ‘ Paid in Full.’ When we played Philadelphia, I called my old boss on the phone and told him there was a pair of seats at the box-office for him, but didn’t tell him who I was. When I came on the stage that night, that Dutchman came near falling out of his seat when he saw his old driver playing the best part ever written.” — Ned Finley 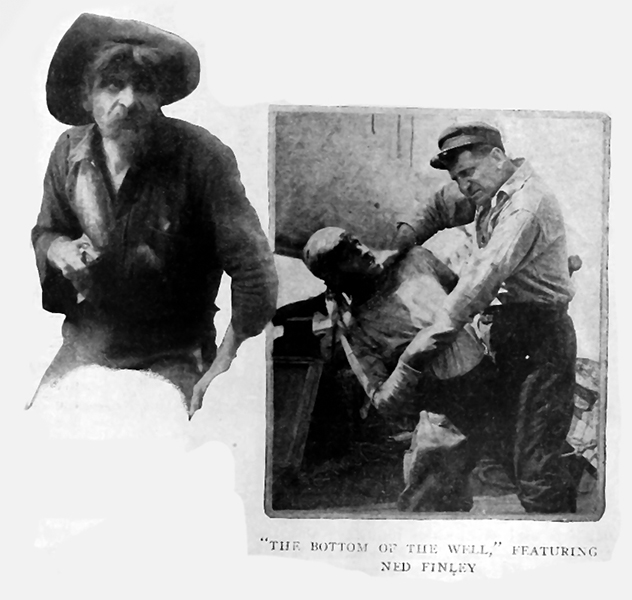 “No, no more stage for me, as long as they will keep me busy in pictures. When I left the Vitagraph (by request) last year, I was going to revolutionize vaudeville, but vaudeville refused to be revolutionized, and I was blamed glad to get back in pictures.” — Ned Finley

“In my picture career, I have died a great many times, some horrible and some peaceful deaths. In the old one-, two- and three-reel days, it was a cinch to die two, three and even four times a month, but with these days of big features, I’m in luck to pass away six times a year. Yes, I guess the features are here to stay, but I’d like to bet some money the exhibitors would like to see the old days of short pictures.” — Ned Finley

About a decade and a half ago, when the film first took the imagination of the theatre-going public, Ned Finley was the “Bill Hart” of his day. For 17 years, he lived on an income that ranged between $1,000 and $2,000 a week.

As the years went by, other stars crowded the old-timers out of the focus and Ned Finley experienced one reverse after another. Early today, he took an inventory. He was 48 years old [he was actually 50] and passe as an actor. His wife had left him a year ago to live in Salem, VA.

He had just a few pennies left and countless numbers of pawn tickets. The money he invested in a poison. He went to he room in the hotel, undressed, wrote a few letters and took the poison.

“I have already taken a poison,” he wrote as he waited for death. “I write this at 2:30 o’clock, 10 minutes after taking the supposed fatal dose. I feel very much alive – no bad effects.”

The ex-star waited for the last fade-out – but nothing happened.

At 3 o’clock he wrote again:

“I have just taken the second poison. Don’t know much about it. The druggist said it would kill half a dozen dogs. The other didn’t work.

“I suffer no pangs of conscience. Don’t believe I have any such thing. Hope this is goodby.”

Ned Finley, real name Charles Campbell Hammit, was not just a forgotten screen villain. He was an early silent film anti-hero, who also directed for Vitagraph in the early- to mid- 1910s. He made a name for himself playing a rugged leading man opposite Edith Storey and Clara Kimball Young in a number of successful films shot in Esmerelda, Asheville, and Hendersonville, North Carolina, in 1913-1914. These were branded as “Blue Ridge Dramas.”

By 1915, Finley began to play more villainous character roles. Then in 1917, as Vitagraph’s prosperity began to weaken, the studio released him from contract. He was viewed as an old-timer and that his two-reel “Blue Ridge Dramas” were no longer popular. He also may have suffered from mental illness or had a drug problem, which made him difficult to work with. Or perhaps, he was insistent that he be allowed to resume his leading man roles in North Carolina. Whatever the case may be, after his dismissal, Finley continued to play smaller villainous roles for the remainder of the year.

Hoping to launch a comeback as a leading man, Finley returned to Esmerelda, North Carolina, with his new production company, Ned Finley Films Inc.,  to resume his “Blue Ridge” 2-reel Western dramas released through the General Film Company.  He boasted that he had collected $100,000 in financing and that he planned to build a studio in either Bat Cave or Esmerelda. However, it became obvious over time that Finley was on a self-destructive course. Rather than move to California to find more work or accept the fact that two-reel westerns were no longer popular, he continued to use an outdated formula, hoping that his nostalgic return to North Carolina would somehow reignite his career.

His Western two-reelers did not make money and later that year, his wife and leading lady (a former Vitagraph player), Marion Henry, left him, taking his son, Ned Finley Jr., with her.

In January 1919, Finley attempted suicide by slashing his wrist with a razor in Central Park. New York policemen found him unconscious in a “clump of bushes” near the bridal path entrance and saved his life. That June, Finley attempted suicide once again, this time slashing his wrist with a large knife. Although his life was once again saved, the laceration was so deep that doctors amputated his left hand in order to save his life. Conflicting reports claim that blood poisoning from an earlier injury had necessitated the amputation.

In late December 1919, Finley returned to North Carolina for one last visit. While there, he expressed his plan to film “Blue Ridge Bandit” and that he had hired “a new Ned Finley in the person of Dick Campbell with all the brilliant dash of the most popular stars on the screen now, and also Adele Kelly, formerly leading lady with the Vitagraph producers.”  But something went wrong during the filming, and Finley returned to New York while the rest of the film cast and crew worked to complete the film.

Back in New York, Finley wrote an acquaintance of his announcing his plan to commit suicide on a certain date before signing his letter “Failure.”

In September of 1920, Finley, now a broken down drug addict, had fallen behind a week’s rent at the Hotel de France in Manhattan, where he had lived for 17 years. In his final days, he pawned over 20 of his personal items to buy enough cyanide and strychnine to end his life.

On the morning of September 27, a hotel maid knocked on his door. After not hearing a response, she knocked again an hour later. Fearing the worst, the hotel owner contacted the police, who forcefully entered the apartment. Finley’s body was found on his bed.

According to several newspaper reports, Finley had left three confessional notes which were numbered. These notes read:

No. 1 – I have already taken what the druggist said was cyanide. I bought it on the pretence [sic.] to poison a dog. At the time I write this, it is 2:30 o’clock, just ten minutes after taking the supposed fatal dose. I feel very much alive and have had no bad effects.

No. 2 – I have some strychnine which I am going to try next, and hope this takes my life. I will wait until 3 a.m. before I take it.

No. 3 – Three a.m. I have taken a quantity, but don’t know how much, of strychnine. The doctor said it is enough to kill several dogs. The acid did not work. I am suffering no pangs of conscience. Don’t believe I have such a thing. Hope this is goodby [sic.].”

Police noted that Finley’s handwriting had become irregular at the end of his third note as if “Death agonies shook his hand before it had finished the confession, so that the last words were almost illegible.”

Dr. Henry Hohman, an assistant medical examiner on the scene, saw a pile of white powder on the Finley’s dresser and stated that “the reason the cyanide and strychnine did not kill him quickly was that he was evidently under the influence of morphine when he took them.” However, after the white powder was tested, Dr. Hohman changed his conclusion to say that one of the druggists must have sold Finley bicarbonate of soda under the guise of cyanide, but that Finley had taken enough strychnine to “kill an elephant.”

Police detectives discovered that Finley had only one cent to his name, which was found on the chiffonier inside his room. They also discovered other notes next to his hotel bill. One of his handwritten notes asked the Actors’ Fund of America to give him a cheap funeral and that he didn’t want his friends attending it. Another note requested that his belongings be given to his estranged wife.

One thought on “Ned Finley – photos and quotes”