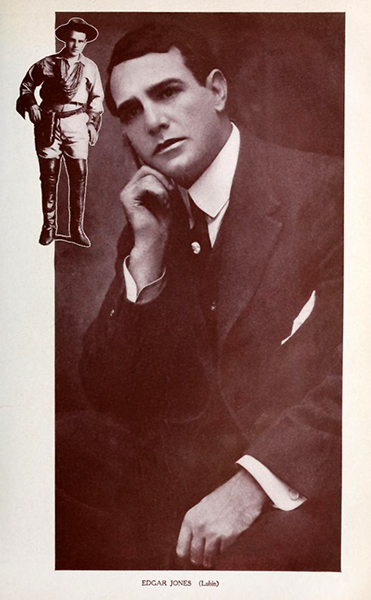 “I was born in Steubenville, Ohio, and after leaving school, embarked in the business of frame-making with my brother. Desiring to broaden my horizon, I went to New York and secured employment in the art department of Siegel, Cooper & Co. The work was confining and when, one day, I was told that night work was expected at intervals, I resigned. Through an actor acquaintance, I heard ‘supers’ were needed for ‘Arizona,’ then playing at the Academy of Music with Dustin Farnum. I made application and was engaged for the magnificent sum of $1 per night.” — Edgar Jones in 1913 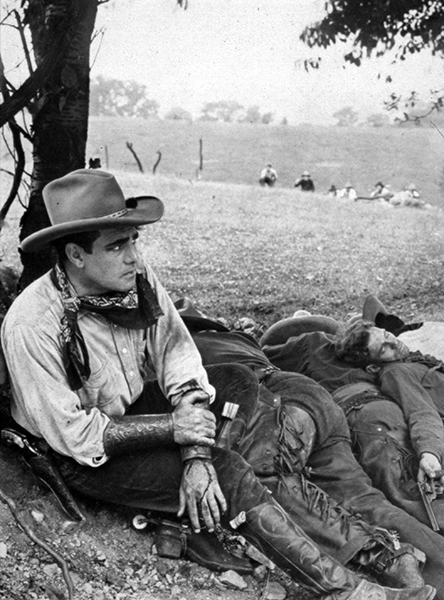 “Strange to say, my first appearance was as a cowboy. I went to Mr. Edgar Selwyn, the stage manager, and asked permission to buy and wear my own shirt, as the one furnished by the company was none too clean. He smiled and granted permission. I think it attracted attention toward me, for on the third night after my opening, he came to me and said he was going to join Kyrle Bellew in ‘A Gentleman of France,’ and asked if I cared to go also. Of course, I jumped at the chance. I did not collect my salary for those three nights in ‘Arizona,’ so I can never say I have lost money in the theatrical profession. Mr. Selwyn made me his assistant and gave me a small part. This was at Wallack’s Theater, under the management of the Liebler & Co. Mr. Selwyn being called to London, Oscar Eagle took charge of the stage, and under him I was again advanced. Mr. John Flood, who was playing ‘Henry of Navarre,’ took an interest in me and advised me to join a stock company for the sake of the experience. I did so, and while playing in Pennsylvania, met Clarence Bennett, author of ‘The Holy City,’ and was engaged to play Marius. I played the part four seasons from coast to coast. The next year found me in ‘stock’ in San Antonio, Texas. The following season, I was engaged for Henry Miller’s part in the ‘Great Divide.’ Last season, I signed again with Liebler & Co. for Miss Viola Allen’s production of ‘The Herfords.’ After a run in Boston, we toured the South. After the company closed, I was brought in touch with Mr. Lubin and accepted an offer to pose in pictures. The odd part of my stage career is that it began and ended with Liebler & Co. The ‘Silent Drama’ appeals to me and has wonderful possibilities, and I hope to be seen, doing the best that there is in me, by the Moving Picture fans for many years to come.” — Edgar Jones in 1913