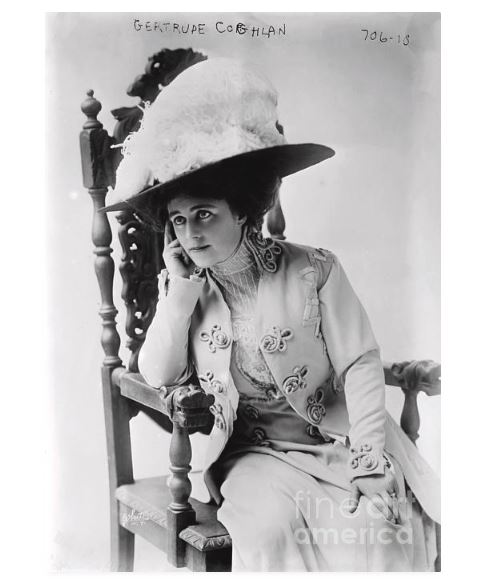 “Thank you; do you know, I can’t realize that I’m to be one of the ‘as is’ profession. But I like pictures so well, that I’m anxious to like the making of them.” — Gertrude Coghlan 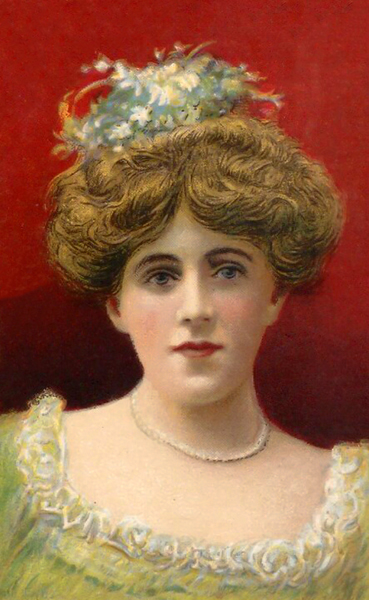 “I made my stage debut when I was 16, with my father. He was Charles Coghlan, and English actor, and was the first one to come to this country and use the natural method of acting. Up till then, actors would eat the scenery and all that kind of thing, you know. Augustus Pitou, Sr. – my father-in-law now – brought my father over here when I was a tiny baby. My mother and I were brought, too, of course, and since then I have crossed the Atlantic 40 times – that doesn’t mean once each year though. Odd, wasn’t it, that Mr. Pitou, Sr., and our family were such friends and I didn’t meet his son until just a short while before we were married, eight years ago. And odder still, my husband, for years before he had met me, had pictures from scenes hanging in his room, which my father had painted and for which I had posed! But where in my ‘life history’ was I? Oh, yes – my father brought his art of natural acting over here and made such a success of it that he stayed. I was a delicate kiddie and my parents used to send me across the ocean a couple of times a year and then I studied painting at the South Kensington Art School in London, intending to adopted as a ‘career.’ But my father introduced me as Juliet, to his Romeo, when I was 16, and I liked the stage so well that I gave up the thought of devoting my time to art and played with my father till the time of his death. We toured the country in ‘The Royal Box’ and my father arrange the role of ‘Becky Sharp’ for me. He died before I appeared as ‘Becky,’ but I played that role for two seasons. Then I starred in ‘Alice of Old Vincennes,’ played with Mrs. Pat Campbell in ‘The Sorceress,’ was in  the all-star cast at the Fifth Avenue theater, New York, before it became a vaudeville house; played ‘Beth’ in ‘The Traveling Salesman and was ‘Shirley Rossore in Henry B. Harris’ ‘The lion and the Mouse,’ 1000 times. I was playing ‘Shirley’ out on the coast when Mr. Pitou, Sr. presented my aunt, Rose Coghlan, in a production out there. He had brought his son with him and that was how and where I met  Augustus Pitou, Jr. We were married that year and each year thereafter, I was going to give up my work on the stage and settle down at home and keep house. But I didn’t give it up until two years ago and now we’re compromised on motion pictures. And, I guess that’s all except that I’m tired out from staying up nights watching dress rehearsals.” — Gertrude Coghlan