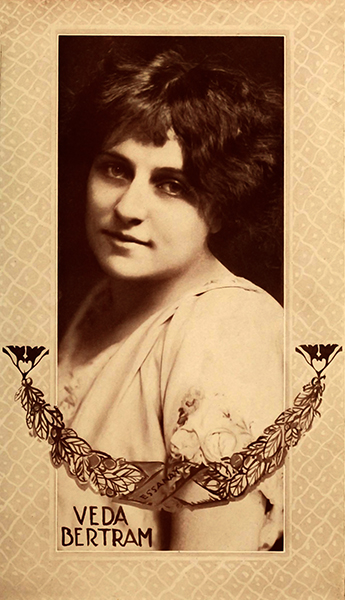 “Well, I am not particularly proud of any of my work, because after viewing it on the screen I can always see where I might have done better….I enjoy seeing my errors in order that I may perfect myself.” — Vedah Bertram in 1912

“I studied at Wellesley four years, and then I went to New York, where Mr. Anderson met me a few months ago, through the mutual friendship of Pauline Chase and Maude Moore, and offered me a position as a leading woman of his western company.” — Vedah Bertram

“My intention when I left college was to go into the legitimate field of acting; but I met Mr. Anderson during one of his visits to New York, and he offered me the position of leading woman of his company. I accepted, thinking that the experience would be of service to me. The longer I remained, the less I thought of my original ambition, and now I am completely settled in my conviction to continue in this branch of the work as long as I remain an actress.” — Vedah Bertram

“My parents forbade me to go on the stage….My folks were so bitterly opposed to my appearing in pictures that I have assumed a name. Vedah Bertram is not my real name….I will not be 21 for two more years, and until that time, I am not independent.” — Veda Bertram [she was already 20 years old]

“I am proud of my work, and love the life I am living, but out of deference to scruples which my parents entertain, I respect their wishes and will not tell you who I am. If I were to do that, you would greatly surprised, I assure you, for my father is a well-known professional man and writer in Boston, my brother is a noted lawyer in New York and I have a list of prominent friends, graduates with me from Wellesley in the class of 1911, scattered all over the world. Promise that you will not try to learn my identity.” — Vedah Bertram

“I have no ambition to become a great actress.” — Vedah Bertram

Photoplay Star Sister of a Prominent New York Attorney; Was a Wellesley Girl

Oakland, CA, August 26, 1912 — Death brought an end the career of Miss Adele Buck, member of a prominent New York family and a star in moving picture dramas under the name of Vedah Bertram, at Merritt hospital this morning. Miss Buck had been suffering from acute appendicitis and a general breakdown for some time and had been under the constant care of physicians. She failed to survive an operation.

The serious illness of the young actress brought out an interesting tale of a clash between parental authority and histrionic aspirations. Because of the dislike of her parents for the profession which she has chosen, Miss Buck had been playing star parts in a moving picture company at Niles under the assumed name of Vedah Bertram.

Miss Buck was the daughter of a well-known Boston writer and the sister of a prominent attorney of New York. She was a talented, well-educated girl and a graduate of Wellesley college. There she developed marked ability as an actress and determined to seek the stage as a profession on her graduation, planning to go into the legitimate. Her plans were violently opposed by her parents; nevertheless Miss Buck decided to persevere in her choice and awaited an opportunity to go on the stage.

Six months ago, she was given an offer to act with a moving picture concern operating here and so made her way to California. Hoping to keep her actions from her friends and relatives, she assumed the name under which she has been acting. She fell in love with her work and quickly made a success, being given star parts. Some time ago, she fell ill and sought advice of a physician in Niles, to whom she revealed her true name for the first time.

She was removed to Merritt hospital, where it was found that she was suffering from acute appendicitis and a general breakdown. She was put under the care of two physicians, and as she continued to lose strength, fears were held for her recovery. She revealed her story after an operation was decided on to save her life, leaving instructions for the notification of her parents in case of failure. She continued to grow worse after the operation and died this morning at 10 o’clock.

Telegrams have been sent to the parents of the girl in the east with news of her death. The body will be held pending some word from them.

Veda Bertram, aka Adele Buck, was the daughter of a wealthy publisher and society person named Jerome Buck. Adele Buck and her father did not get along (which may have intensified after her parents’ divorce.) She also may not have had a close relationship with her mother, too, which explains why she lived with her grandmother in 1910. There is some speculation that her mother may have died prior to 1912.

At that time, society folks viewed movie acting with disdain so it is not terribly surprising to have disagreeable parents. However, Jerome Buck deeply resented his daughter’s new profession. Judging from her one major newspaper interview in April 1912, she used her growing fame to either needle him or get his attention in a passive aggressive way.

According to IMDb, Bertram worked in 24 one-reel western films in the first half of 1912. However, she had a health crisis. She became pregnant and opted for an illegal abortion that led to a fatal infection. On July 26, 1912, days before her scheduled operation, the San Francisco Call published her true identity although it never mentioned her abortion.  The Call also reported that her “father had been notified [via telegram] and is expected to arrive in a few days.” The article further states that her father “hopes to greet his daughter before the critical operation Doctor Clark says must be performed to save her life.”

Before going into surgery, Bertram knew that her life was in danger. Keeping a brave face, she told the press: “I do not believe this will result in my leaving the motion picture stage. I have become strangely attached to the life which it seems to me must be much more congenial than the so called legitimate. When my father arrives, I shall explain the situation to him and I feel sure he will not object to my continuing in my chosen work. I have become wedded to the life and I will be a motion picture actress as long as I am an actress at all.”

It appears as though Jerome Buck did not show up.  Following her operation, Bertram stayed under doctor’s care. No health updates were given until August 20, when newspapers reported that her “recovery is considered doubtful.” Six days later, she died.

Bertram/Buck‘s body was sent back to New York. Funeral services were held on the evening of September 4 at her grandmother’s house at Sheephead Bay. She was buried the following morning in Woodlawn Cemetery in the Bronx.

The Brooklyn Daily Eagle reported that “a few days before Miss Buck died, her father, Jerome Buck, the advertising manager in the Brooklyn branch of a Manhattan newspaper, had gone North on a vacation. The relatives do not know his whereabouts, and say that although he knew his daughter was ill, he left word at his office that under no circumstances whatever were letters or telegrams to be forwarded to him.”