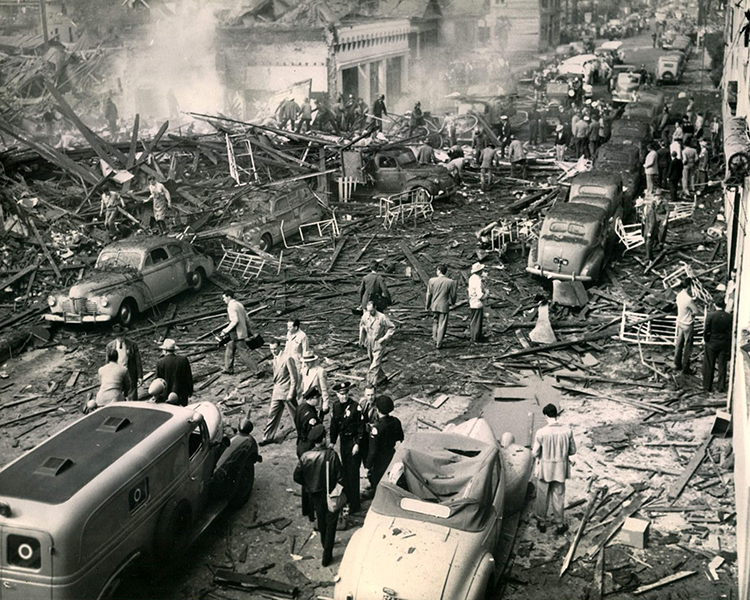 (The following article is actually a recap of a historical event that happened in 1947, revisited by the Los Angeles Times in 1997.)Since the film industry moved west shortly after the turn of the century, Los Angeles has been on the cutting edge of what has come to be called the information age. And, though it is seldom recalled, the first convergence of live television and disaster–a staple of today’s TV news–occurred in response to the city’s most deadly industrial accident.

Television made its American debut at the 1939 World’s Fair in New York. Within a year, Paramount had dispatched the brilliant Klaus Landsburg to build an experimental TV station–W6XYZ–in Los Angeles. Landsburg, who had invented a widely used FM radio receiver while in his teens, fled his native Germany shortly after the Third Reich classified his pioneering work on radar and sonar as a national secret. In 1936, however, Landsburg had participated in experimental television broadcasts of the Berlin Olympics.

He arrived in Los Angeles with an unequaled technical background and an abiding belief–gleaned from his Berlin experiment–that live television had the power to fundamentally alter people’s understanding of the world around them.

There were 350 home television sets in Los Angeles on Feb. 20, 1947, when Landsburg’s system was put to its first great test. At 9:45 a.m., a vicious chemical blast at the O’Connor Electro-Plating Co. ripped apart a four-block area in the manufacturing district on Pico Boulevard between Stanford Avenue and Paloma Street, leaving 17 dead and 150 injured.

Within minutes, W6XYZ reporter Dick Lane–later an institution on local TV–was broadcasting live from the scene to a tiny but transfixed audience.

The explosion that destroyed or damaged 116 buildings had opened a crater 22 feet wide and 6 feet deep. The blast shattered windows across a 1-square-mile area and was felt as far away as Long Beach and the San Fernando Valley.

Mayor Fletcher Bowron was soon on the scene, comparing the disaster to the 1933 Long Beach earthquake, which caused 102 deaths and thousands of injuries.

Relatives of the dead, injured and missing gathered amid the confusion. Among them were the families of the plating company’s chief chemist, Robert M. Magee, 35, and his assistant, Alice Iba, 22, whose bodies were never found.

As telephone and electrical wires dangled in the street, police picked through evidence, finding body parts.

A twisted 15-foot pipe had been hurled over a four-story building, landing a block away, where it killed a 10-year-old boy riding his bike.

Trembling switchboard operator Edna Aukerman was left sitting in her swivel chair out in the open, surrounded by shards of glass.

A young man visiting the plant with his salesman father struggled to safety as firefighters pulled the body of his father out of the rubble. Others workers were bleeding and moaning; some were tinted green by chemicals.

Father Luis Antlitz, shaken by the blast at nearby St. Turibius Catholic Church, sprinted four blocks to the scene, holding up his long brown Franciscan robes. He and four other clergymen began anointing victims with holy oil.

The O’Connor Electro-Plating Co. had been in business in the same one-story brick building for almost 20 years. The plant was managed by Robert J. O’Connor, son of the company’s founder. O’Connor knew little about chemistry, so he had hired Magee, who presented impressive credentials. But in truth, Magee had been working as a foreman at a local dairy and was only an aspiring chemist without even a high school diploma.

For almost a year, Magee worked on a revolutionary process for polishing aluminum, anxiously waiting to get it patented. He was using a mixture of 140 gallons of perchloric acid and 70 gallons of acetic anhydride, nearly as volatile as nitroglycerin. It was imperative that the acid be kept under refrigeration. But an hour before the blast the refrigeration unit broke down. About the same time, as investigators later surmised, Magee apparently inserted a plastic rack into the solution, triggering the blast.

The coroner’s inquest found no criminal negligence on the part of the O’Connor family and laid responsibility for the devastation on Magee.

The City Council later passed an ordinance giving the fire and health departments more power to regulate dangerous chemicals. Two days after that, W6XYZ, the first station on the scene, was granted a commercial broadcast license as KTLA-TV Channel 5.