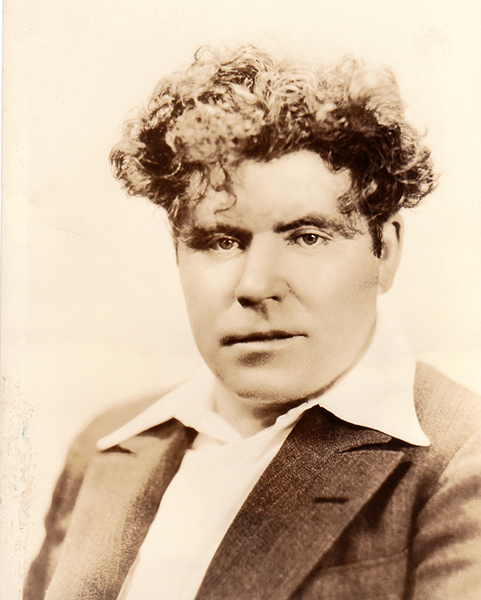 “I have no whine at fate. I began with nothing and have ended with more money than is good for one. . . I write because I love to. . . I have perhaps less academic training than any man who has ever succeeded at writing in America. . . I will never be the artist I thought I would. Words are not elastic enough. . . I have done as nearly that which I set out to do as any American writer ever has.” — Jim Tully (1886-1947) 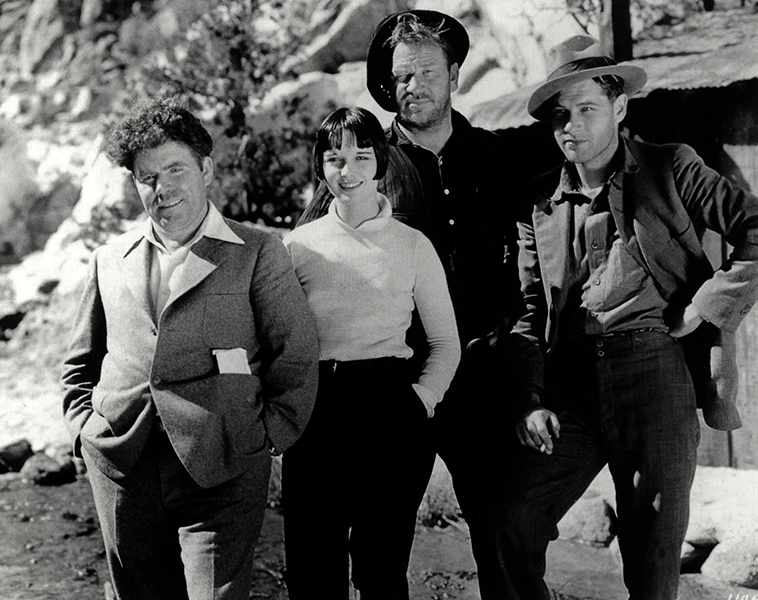 “My first book was bad, and is now forgotten. I found myself, I think, in Beggars of Life, which I wrote in six terrifying weeks, while living with a bootlegger. . .” — Jim Tully

Photo: On location for the screen version of Beggars of Life, starring Louise Brooks, Wallace Beery, and Richard Arlen. 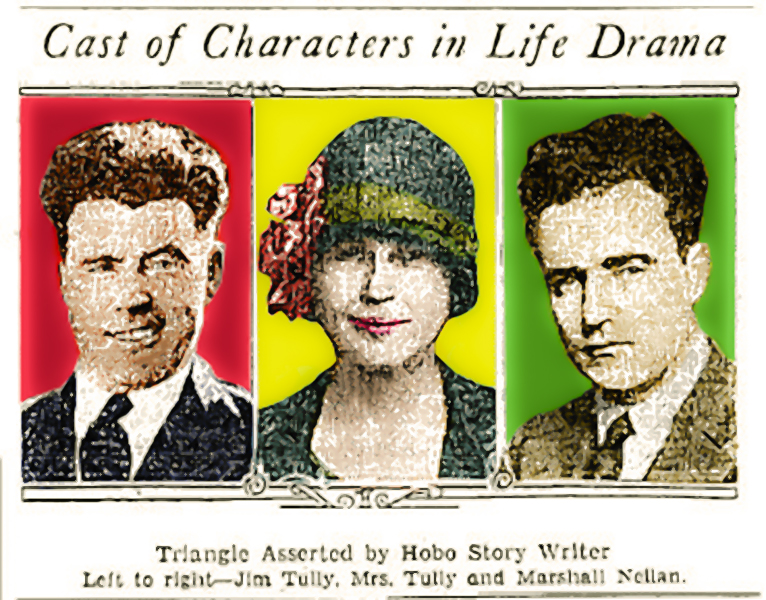 Jim Tully and Wife Make Up Once More

HOLLYWOOD, April 17, 1929 – (UP) – Jim Tully, hobo novelist and scenarist, and his wife, Margaret Byers [sic] Tully, have been reconciled again, it was learned here today.

Their contested divorce action, the second instituted within a year and scheduled for trial tomorrow, will be withdrawn, it was said.

Mrs. Tully, in her complaint, said that the writer was a “Man of no conventions and very few morals” and accused him of excessive drinking.

In his cross-complaint to her suit, Tully charged her with misconduct with Marshall Neilan, the screen director.

Neilan answered the charges against him by accusing Tully of attempted extortion. Tully offered to not name Neilan as a correspondent if Neilan would pay $25,000, Neilan claimed.

Mrs. Tully filed a previous action about a year ago but that was withdrawn after a reconciliation.

Margaret Rider Myers, the daughter of a building and loan executive, met famed novelist, Jim Tully, after a lecture he had given at the University of Southern California’s Pen Point Club. Myers was a student at the time and after a six month courtship, she and Tully married on January 24, 1925.

Tully had been married before, but his first wife of 13 years had divorced him in 1923 on charges of desertion.

The Tully-Myers marriage was stormy at best. Tully was the most hated man in Hollywood, a reputation he enjoyed for being disagreeable, crude and for writing very frank commentary about celebrities. Previously, he had worked with Charles Chaplin as a ghostwriter for the comic’s memoirs. Margaret, on the other hand, worked as a publicist, often using the name “Marna Tully.”

Tully was known to bring in his hobo friends to his house for an occasional night of binge drinking. During these parties, he would not only offer them his own bed to sleep for the night, but also his wife’s bed—while she was present.

On May 6, 1928, Margaret attended a party at the home of a prominent male movie star living in Santa Monica. While there, she met film director, Marshall Neilan, who had broken off a date at the last moment and had arrived alone at the party.

Neilan and Mrs. Tully spent the evening talking over drinks. After the party, he drove her to his home located at 601 Camden Drive in Beverly Hills for a “clandestine meeting.” Mrs. Tully’s car remained parked near the Santa Monica house.

According to Tully, his wife boasted about her infidelity repeatedly between June 14 and June 28, knowing that he and Neilan had been longstanding “bitter enemies.” The constant mentioning of the one night stand caused “grievous mental anguish…rendering [Tully] wholly unfit for efficient work for the last seven months.”

Mrs. Tully claimed that she had been coerced into admitting her infidelity under her husband’s threat of physical harm. She filed for divorce that same month but had dropped it at the request of Tully. Their truce, however, did not last long.

In September 1928, Mrs. Tully filed for divorce a second time. This time, she asserted that her husband had kicked and hit her while in a drunken state. She also charged him with using profane language, humiliation tactics, nagging, bringing another woman into their home for immoral purposes and for flying into a rage after news of their last reconciliation had been published.

Mrs. Tully estimated that their household was worth about $150,000 and that her husband made about $2000 a month as a writer. Pending the divorce hearing, the court ordered Tully to pay his wife $50 a week.

Despite the nastiness of their back and forth accusations involving her alleged affair with Neilan, the Tullys reconcile a second time in April 1929 (as the above article mentions). However, on November 20, Mrs. Tully left Los Angeles for Las Vegas to establish a new residence and to compile a Dictionary of Slang. According to her divorce petition, Tully had fought with her in front of guests and had told her that he wanted her to leave him. In fact, he threatened bodily harm if she didn’t move out adding that he would leave the United States for the South Seas Islands after he was done with her.

On February 24, 1929, a couple of weeks after Tully knocked John Gilbert out cold at the Brown Derby, Mrs. Tully filed for divorce in Las Vegas, citing “extreme cruelty” and that her husband’s “temperance was too much to bare.” This time, Tully did not hit back. Mrs. Tully’s only demand in her petition was that she be allowed to resume her maiden name. Her wish was granted the following day.

February 13, 1930 — Los Angeles Times –The grudge John Gilbert, film star, holds against Jim Tully, hobo author, as a result of a magazine article Tully wrote about him two years ago was by no means ended by their fistic encounter on the night of the 2nd inst.

At Palm Springs yesterday, where he has been vacationing since the fight, Gilbert emphatically declared he is “by no means licked yet.”

In other words, Gilbert explained, the fact that Tully bested him in their first encounter hasn’t frightened him in the least in so far as Tully is concerned.

“I’m not hurling any defiances or challenges at Tully, nor am I predicting a fight if we chance to meet again,” Gilbert said. “But my opinion concerning the man hasn’t changed in the least. What happens in the future depends on the circumstances of our next meeting.

“The mere fact that Tully knocked me down hasn’t frightened me, nor has it changed my opinion about his prowess as a fighter. I firmly believe the results will be far different if it ever happens again. The circumstances were all against me the night at the Brown Derby.

“But there’s one thing sure, and that is this: If I feel as I did the night we met in the café there’s going to be trouble.”

Told that Tully remarked he had “better take care of his picture work and let me alone,” Gilbert merely laughed and had no comment to make.

Tully reasserted he is not and was not looking for trouble with Gilbert, and that the latter provoked the battle before scores of patrons at the restaurant, but that he will protect himself whenever and wherever the occasion presents itself.

Since the fight Gilbert has been sojourning at Palm Springs with his wife, Ina Claire, New York stage actress, who came here for the talkies. He denied reports he went to the resort to get into condition for another meeting with Tully.

In April of 1928, Jim Tully wrote a scathing poison pen article for Vanity Fair called, “John Gilbert — the Screen’s Most Romantic Hero Has No Glamour for Hollywood’s Severest Critic.” In the article, he portrayed Gilbert as a lecherous mama’s boy, who turned his back on his impoverished father while living an extravagant lifestyle.

Tully even quoted Lon Chaney as saying, “Mr. Gilbert is a young man with a romantic face, almost a high school education and a conceit that through pampering and soft handling has passed all belief. He is a good actor and thinks he is much better. He has forgotten the meaning of tact from disuse of that quality. He loves to impress folks with his greatness by being unpleasant to them.”

Gilbert was so offended by Tully’s article that he claimed that he had vomited after reading it. He also felt compelled to oversee the publishing of segments from his own biography in PhotoPlay Magazine to defend himself.

On the evening of February 2, 1930,  after Gilbert had entered the Brown Derby, one of his friends pointed out Tully eating in a booth. Gilbert marched over and tried to instigate a fight by stating, “Get on your feet!”

Tully stood and the two began to square off while Sid Grauman tried to diffuse the situation. The fight, however, didn’t last long. In fact, it was over after one punch. Tully knocked Gilbert cold and the star had to be escorted out of the café. Meanwhile, the “Most Hated Man in Hollywood” sat down and finished his meal.

MGM’s publicity department quickly went to work. They ordered Tully and Gilbert to pose as friends for photos. Later that same year, MGM cast Tully as a supporting character in the Gilbert film Way of a Sailor. And if that wasn’t bizarre enough, Tully worked as Gilbert’s voice coach during the production. 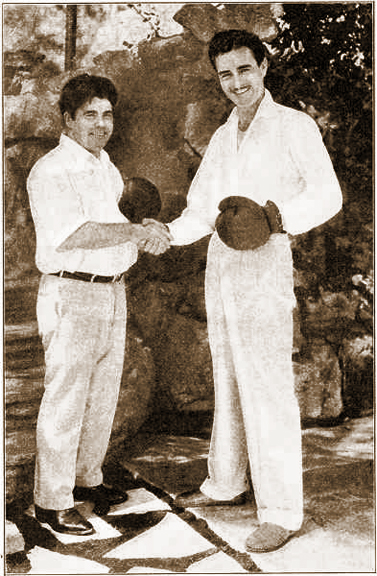