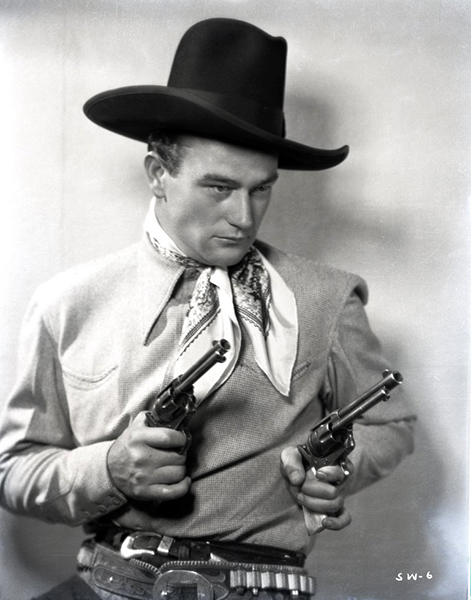 “When I started, I knew I was no actor and I went to work on this Wayne thing. It was as deliberate a projection as you’ll ever see. I figured I needed a gimmick, so I dreamed up the drawl, the squint, and a way of moving meant to suggest that I wasn’t looking for trouble but would just as soon throw a bottle at your head as not. I practiced in front of a mirror.” — John Wayne 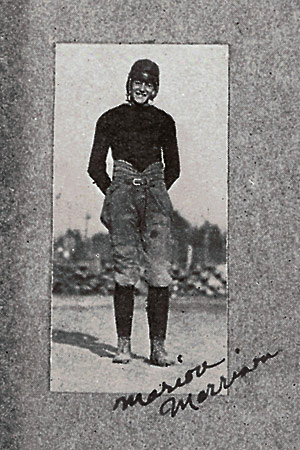 Marion “Duke” Morrison (aka John Wayne) played for the 1924 Glendale Union High School Dynamiters football team. He was the Dynamiter’s star player, senior class president and (believe it or not) the sports editor of the Glendale High School newspaper.

The team’s coach (probably not the man pictured) was James Pierce, who went to work at Glendale Union in 1924. Pierce, who stood 6’4,” would later star in Tarzan and the Golden Lion in 1927 as well as become the first radio Tarzan. Pierce got the gig following his engagement to Edgar Rice Burrough’s daughter, Joan, after the two met at a party. 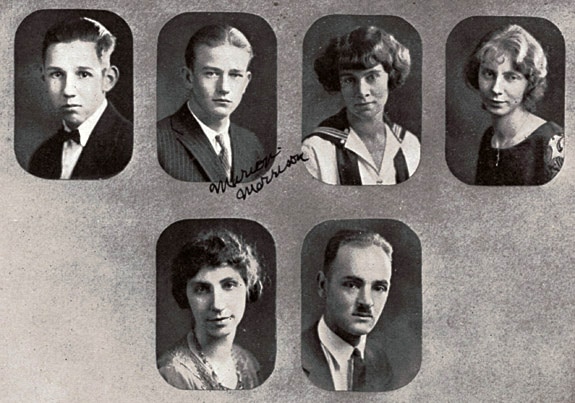 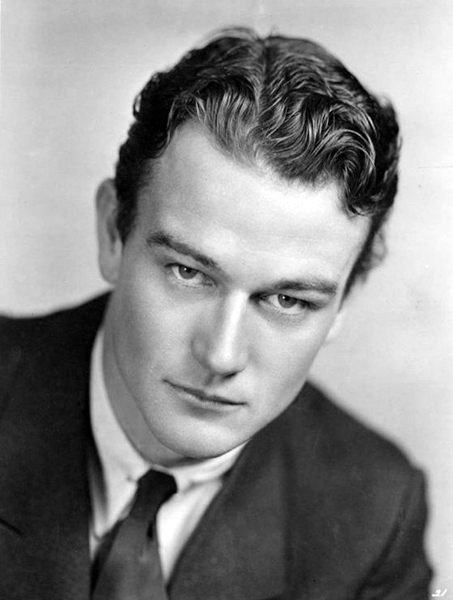 Source: John Wayne: The Life and Legend by Scott Eyman. 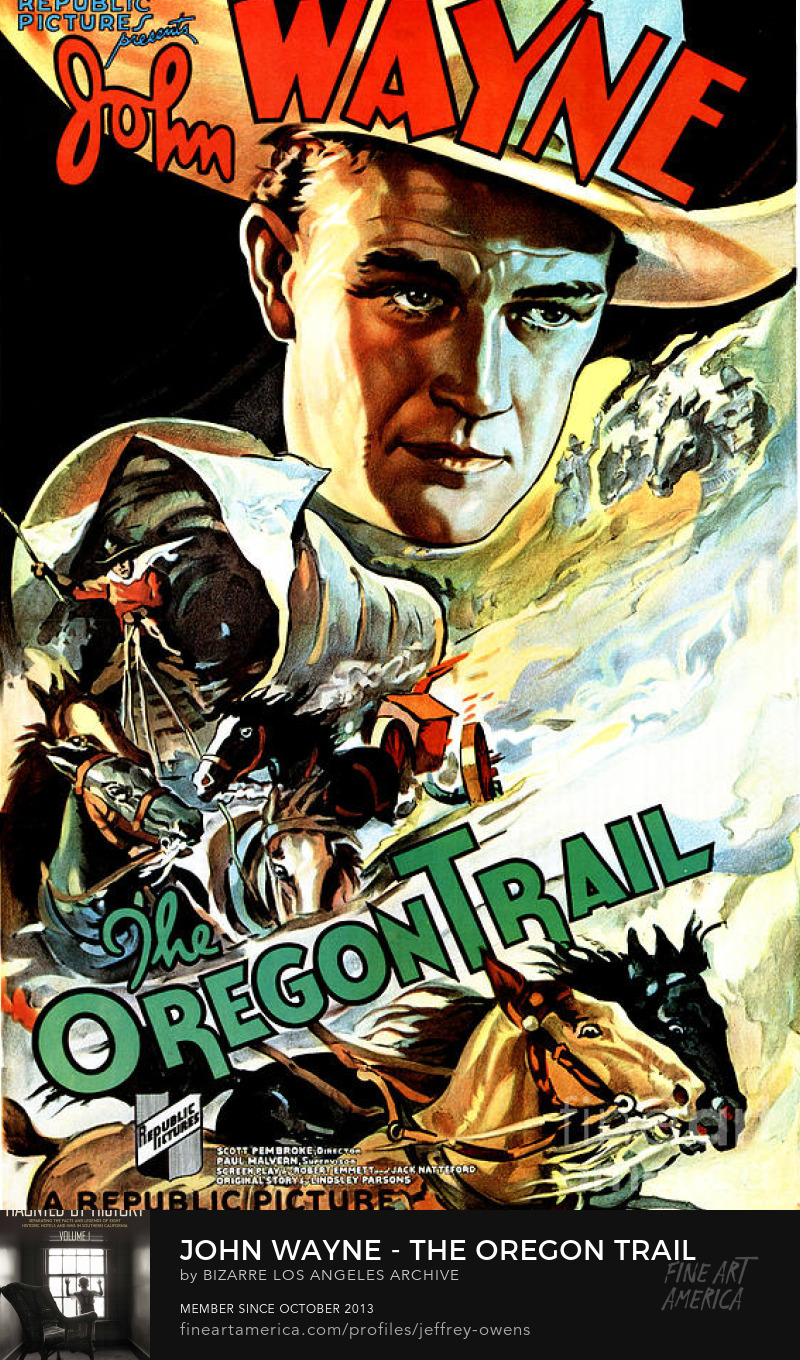 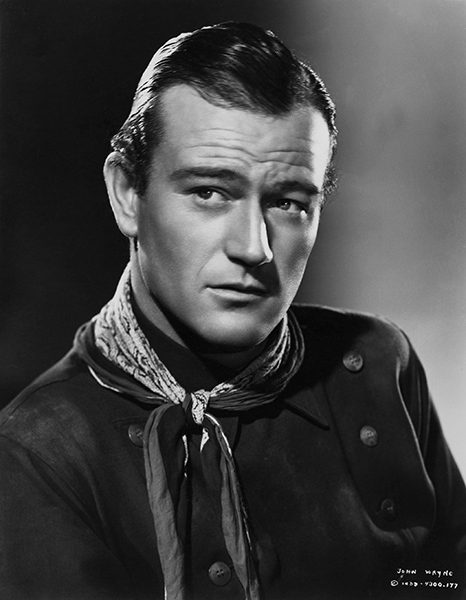 “Stagecoach was a milestone in film history as well as in John Wayne history. It took my father out of ‘B’ movies and put him in ‘A’ movies. Interestingly, it did the same for westerns as a film genre.” — Michael Wayne, his eldest son. 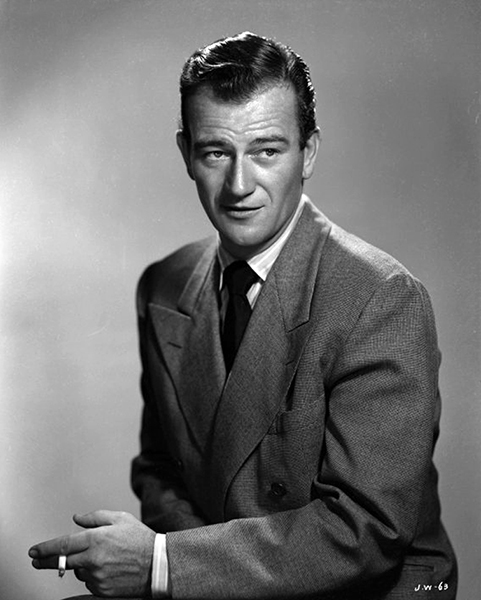 “If a kid came to ask me how to prepare for a screen career, I guess what I’d say would be to go to school, learn to handle liquor, mix with people, get into trouble, work in lots of different jobs, and always remember his reactions to things and people. That is the best equipment in front of a camera.” — John Wayne

“Every morning, he would just scream and destroy somebody, like the time he lost his temper with Lee Aaker, who played my son Johnny. Lee was just a kid and made mistakes in several scenes, blowing his lines or opening a door at the wrong time, and Wayne would walk around the set saying, ‘What are we going to do about that goddamn kid?’ Then Wayne would calm down and apologize, but poor Lee became quite terrified.” — Geraldine Page. 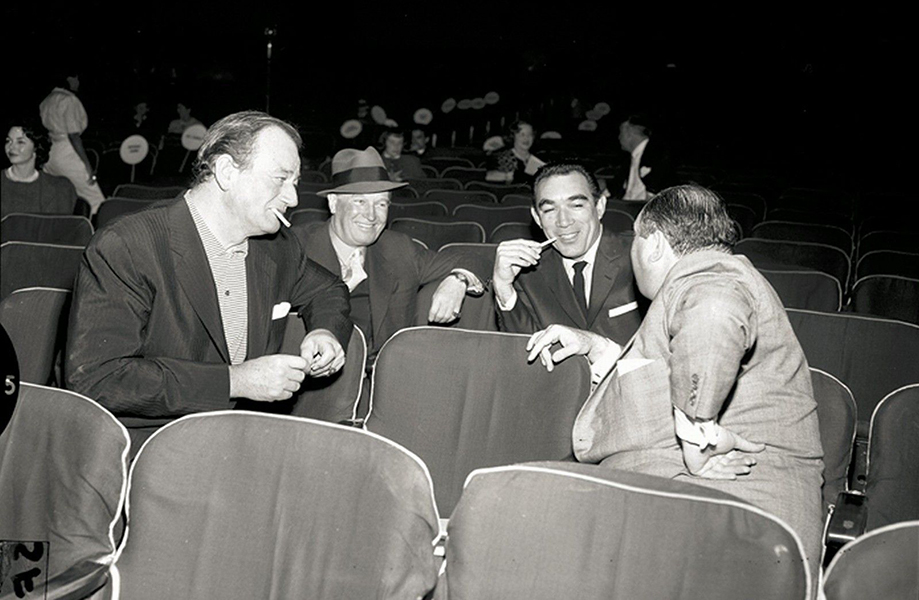 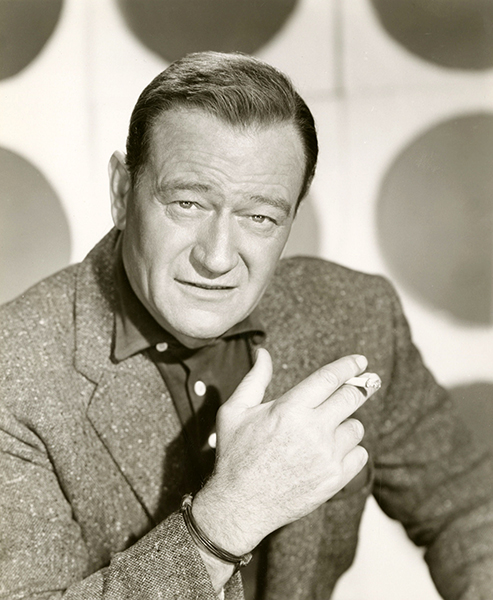 “After 30 years in this business, the pendulum finally has swung to the actors – and everybody hollers. We’re only getting the money that used to go to the relatives of the studio bosses. At least, we work for what we get. And that’s more than you can say for a lot of the nephews around this town.”  — John Wayne 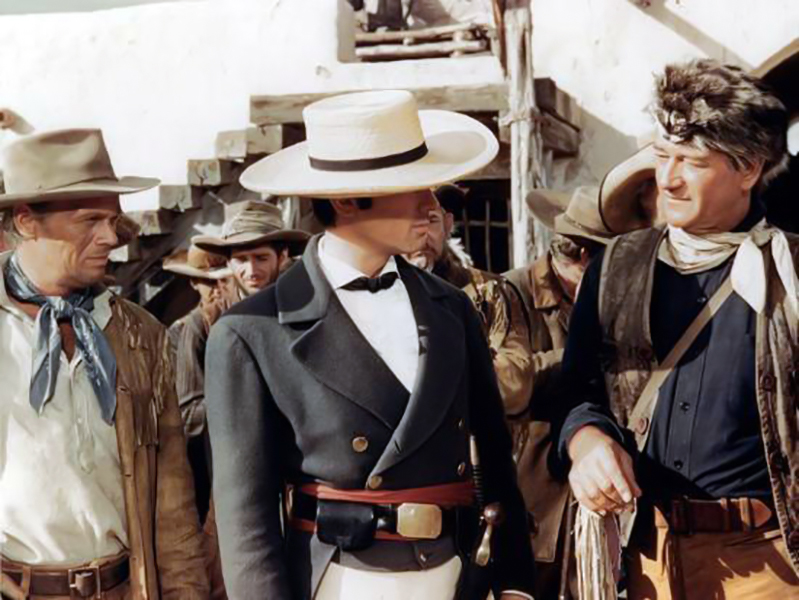 “This is going to shake hell out of people all over the world. And that’s what I want most of all to accomplish. I want to remind the freedom-loving people of the world that not to [sic] long ago there were men and women in America who had the guts to stand up and fight for the things they believed in. The people of the Alamo realized that in order to live decently, a man must be prepared to die decently. There were no namby-pamby pussyfoots, malingerers, or skedaddle in that brave band. They were rough, lusty, hard-fighting, hard-drinking, hard-loving men who held to one common conviction, that freedom is worth fighting and dying for, and they gave their last drop of flood to be true to it. In San Antonio, Texas, the Alamo is venerated as a shrine, but it does not belong to Texas alone. It belongs to the people everywhere who value the priceless treasure that has always been bought with blood; freedom…remind freedom-loving people all over the world of the kind of guts my country is built on. You think I’m a cornball? Well, I’m not ashamed to be proud of my country!” — John Wayne

Photo: The Alamo (1960). With Richard Widmark and Laurence Harvey. 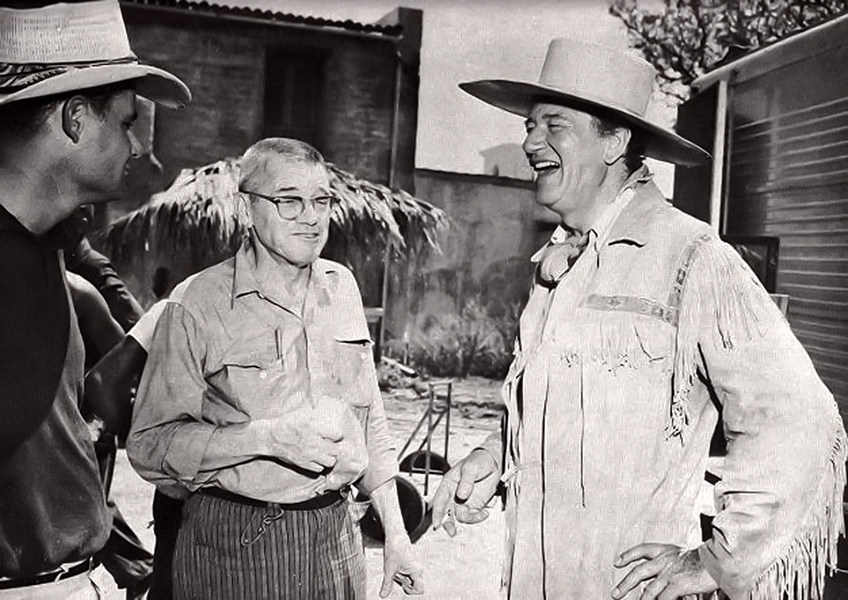 “This big, lovable bum is one of the worst suckers you ever saw. He has blown over a million bucks on friends — or even some guys who tell him they went to school with him. It makes me want to shoot him.” — James Edward Grant (center), screenwriter of The Alamo in 1960.

It’s true. Wasteful spending had depleted Duke‘s finances. When his directorial debut The Alamo went over budget, he shrugged it off, thinking he had the money to pay off the extra costs. Later, he found out he was almost bankrupt as the result of a handful of money-losing investments. One of his losers was the Culver Hotel, which had gone downhill after he bought it. 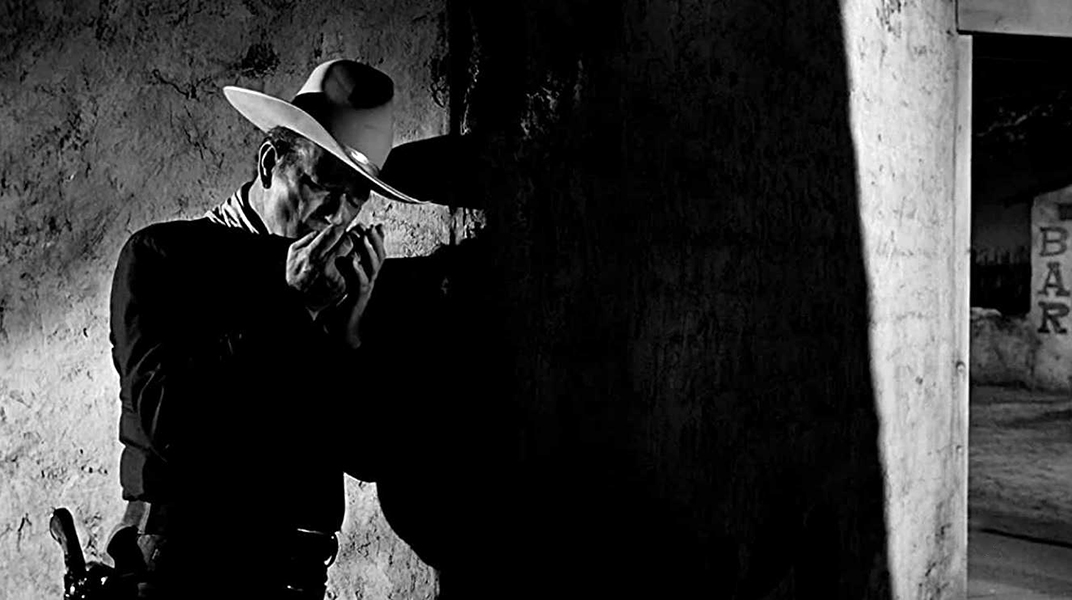 “I want to play a real man in all my films, and I define manhood simply: men should be tough, fair, and courageous, never petty, never looking for a fight, but never backing down from one either.” — John Wayne 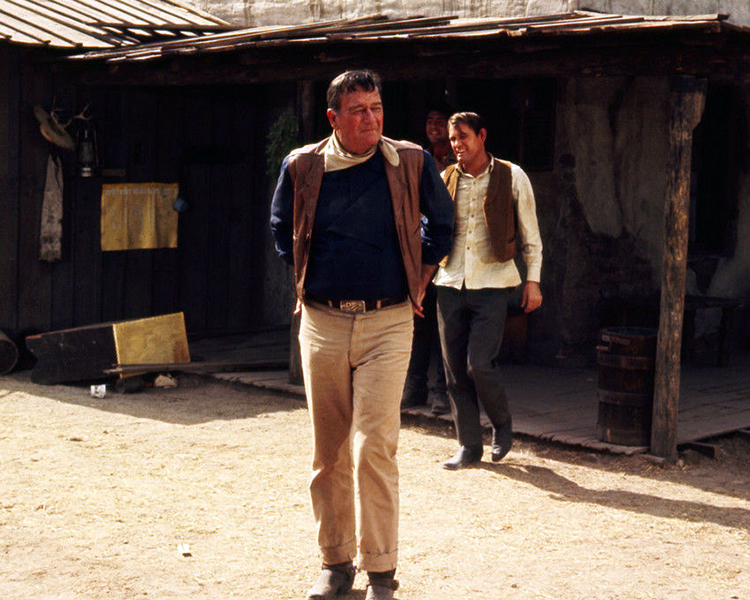 “That feeling of helplessness, of being a burden to your family. That’s what hit me hardest of all when the doc told me I had cancer of the lung.” — John Wayne

Photo: The Sons of Katie Elder (1965). With Earl Holliman and Dean Martin.

“I’ve known Jane Fonda since she was a little girl. I’ve never agreed with a word she’s said, but would give my life defending her right to say it.” — John Wayne (or at least, attributed to him in 1979).

Earlier, John Wayne was asked what he thought of Fonda‘s activism against the Vietnam War. He replied, “I think she’s a little mixed up in her thinking.”

Jane Fonda responded to his comment, by saying, “I don’t know the man, but I think he’s got guts.”

When Fonda won her Academy Award for Klute, John Wayne showed up at a party to congratulate her. Both agreed to respect their political differences. 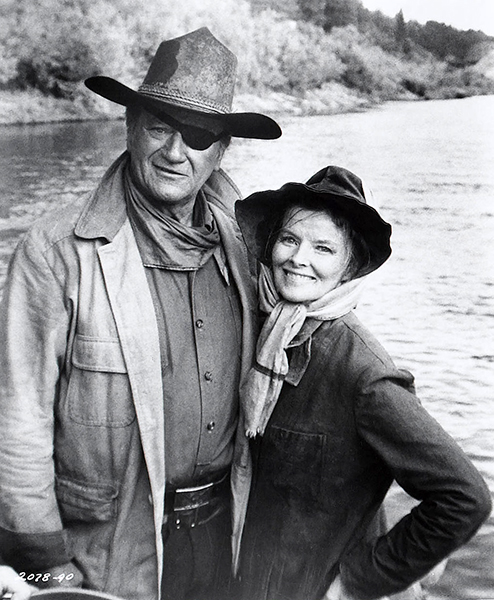 “As an actor, he has an extraordinary gift. A unique naturalness. Developed by movie actors who just happen to become actors. Gary Cooper had it…. A very subtle capacity to think and express and caress the camera – the audience….So that the audience does not feel that they are watching. But feel a real part of what is going on. The acting does not appear acting. Wayne has a wonderful gift of natural speed. Of arrested motion…” — Katharine Hepburn

“People started sending me letters that I’d fallen off my horse one too many times, that I’d been bounced on my head as a baby. There’s still a little group that continues to ride me. I try to answer them but they keep sending me these maniacal statements.” — John Wayne, discussing the hate mail he received from “ultra right-wingers” for supporting President Jimmy Carter’s decision to give the Panama Canal to Panama in 1977.

* The term “ultra right wingers” is taken from the 1977 article and is not my own spin. In fact, the name of the article is “John Wayne is NOT, repeat, NOT a pinko.” 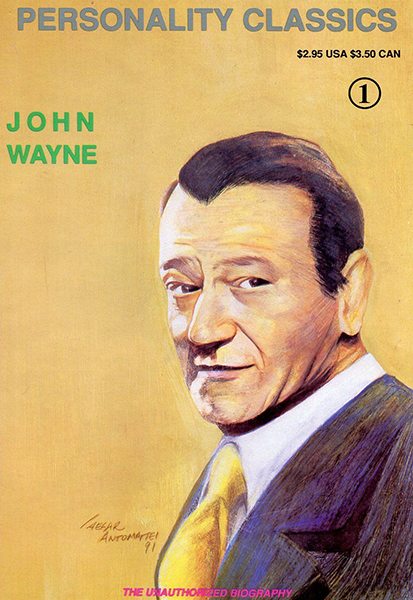 The cover of an illustrated comic book style biography, published in 1991.