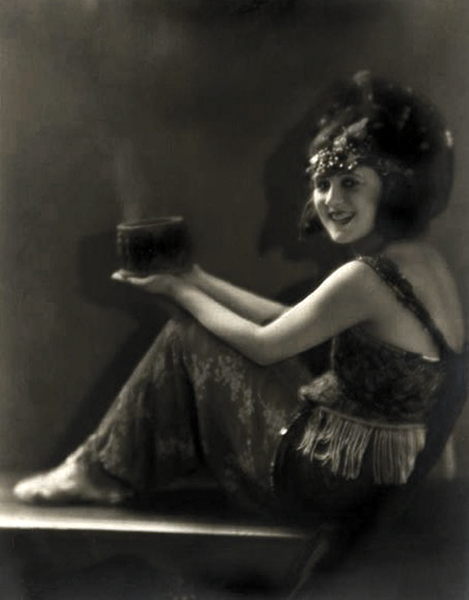 She was born Maryon Eloise Aye in Chicago, Illinois, in 1903. Her father, James, was an attorney and her mother, Eloise, was a homemaker. She also had one younger brother named James Jr. In 1911, the Ayes moved to Los Angeles and lived in a house on Ivar Street. Her father worked as an agricultural supply salesman.

According to her own press, when Aye was around 14-years-old and on a “school vacation,” she was “discovered” by Roscoe “Fatty” Arbuckle, who got her into the Balboa Film Studio in Long Beach, CA. (Another variation of the “discovery” story maintains that Mack Sennett had seen her walking on the beach and had offered her a job at his studio. Neither version makes complete sense because the details are hazy.) What IS known is that she worked as an extra at the Balboa Film Studio in 1917 and/or 1918. While there, she romanced a motion picture cameraman named Sherman William Plaskett, who was 10 years older than her. On March 11, 1918, a month before her 15th birthday, the couple filed for a marriage certificate in Santa Ana, CA. On the license, she claimed that she was 18. 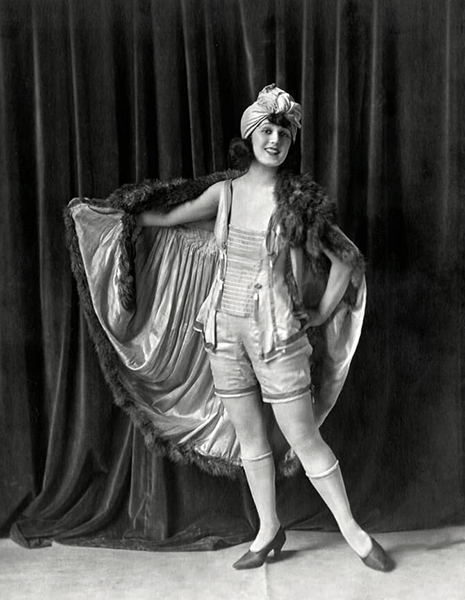 Aye, now a shapely, 16-year-old widow, signed a short term contract with the Mack Sennett Studios as a bathing beauty. However, she was not specifically hired to appear in films. She was mostly consigned to making personal appearances in  Midwest and Eastern Coast movie houses. In 1920, she left Sennett to work in New York as a chorus girl on the Orpheum theatre circuit and in a vaudeville revue called the Bothwell Browne’s Bathing Beauties. While at Bothwell Browne’s, she met and married a dynamic press agent named Harry D. Wilson, who worked for the vaudeville company. Wilson was known for his high energy and quick wit. He also knew how to build beautiful women into stars. He began to heavily promote his bride as a former Sennett Bathing Beauty and “Follies” girl, which secured her a short contract with Fox Sunshine Comedies. When the couple moved to Los Angeles, she immediately found film work as comedian Larry Semon’s romantic lead in The Hick (1921).

With only one high-profile screen credit under her belt, she promoted herself as a “leading lady.” She also boasted that her breaking into the movies had been “easy.” Although Semon wasn’t  interested in working with her again, other producers came forward with contracts.  Aye soon found herself playing opposite William Fairbanks and Guinn “Big Boy” Williams in Western film shorts. In late 1921, Rogell-Halperin Productions, under the Western Pictures Exploitation Company, signed her to star in a series of films opposite Western star Bob Reeves. As a publicity stunt, Wilson, her husband, arranged for Aye to be the first film performer to sign a contract with a “morality clause.” Playing along with the stunt, she responded by saying “Well, anyway, there is nothing to prevent me from dipping bread in chicken gravy – and that’s my worst dissipation.” (Note: Because the producer and production company were never identified, the signing was probably a fake photo op to get Aye’s name in the newspapers. In fact, much of the same verbiage was recycled a year later in another breaking story of her recently signing a morality clause for the first time.)

In early 1922, Aye indicated that she no longer wanted to work in comedy and that she wanted to put her Mack Sennett and vaudeville days behind her. Wilson may not have liked her decision to stop making comedies because he concocted an odd publicity piece that showed a cartoon psychologist peering into her empty head with a telescope. The copy also used the word “temperament” in determining what roles she should play. (Note: Wilson would use the psycho-analysis to belittle her intelligence years later.)

While Aye spent most of 1922 appearing in Westerns. Wilson presided over the newly established Western Association of Motion Picture Advertisers (WAMPAS).  He then made sure that Aye became one of its first WAMPAS Baby Stars, a title given to up-and-comers that are predicted to become major screen personalities. As part of the publicity, she drove a fancy car with her name emblazoned on the sides. She also starred in a a comedy short opposite Stan Laurel and directed by Broncho Billy Anderson. 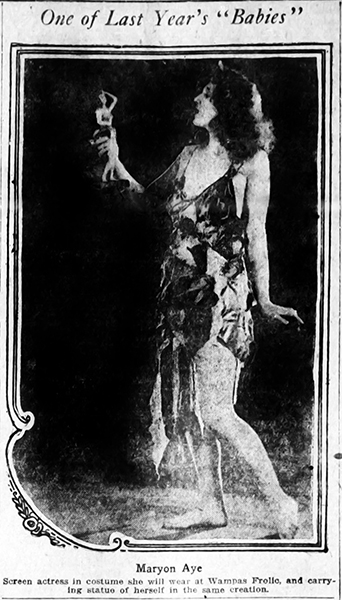 Aye soon graduated from lead roles in B Westerns and comedy shorts to supporting roles in higher quality, more serious pictures. She appeared as a maid in Marshall Neilan‘s The Eternal Three, and as Bryant Washburn‘s love interest in The Meanest Man in the World.  She also signed a five-year contract with Hollywood Productions, a branch of the Truart Film Corporation.

And then the bottom slowly fell out…

In the summer of 1923, shortly after signing with Hollywood Productions, Wilson left her. Her contract also yielded no new films. After her contract expired, she signed with Fox Studios in early 1924, thanks to her friendship with director John G. Blystone.

While it is not clear why Wilson left, Aye hinted that she had grown tired of his publicity spins and that he had lost romantic interest in her:

“Give me a non-professional husband!” she wrote. “Nothing is so wearing as too much of the same thing, and I believe an actor or director would give one no rest from shop talk. Besides, a man outside the studio is far more apt to remain the lover, for to him you can preserve the glamour of the screen. Nothing destroys his illusion of you, for he is unlike the man inside who knows all about illusions!”

That summer, she divorced Wilson on grounds of desertion. As part of their settlement, she agreed to “receive $50 a week from her former husband…and to have all the publicity Wilson can give her.”

After making three films at Fox (as a supporting character),  she found herself once again without a studio contract. To keep her name in lights, she turned to the Los Angeles stage and scored a huge hit as a flapper in the comedy “White Collars,” a play that ran from 1924 to 1925. Her film career, however, fizzled. Her final screen credit was Irene (1926), a comedy starring Colleen Moore. Afterwards, she worked uncredited…if she worked at all.

By the late 1920s, Wilson had become one of the top press agents in Hollywood, handling stars like Jackie Coogan, Colleen Moore, Corinne Griffith, Dolores del Rio and (later) Lupe Vélez. However, his efforts to publicize Aye were either non-existent or purposefully spiteful. For instance, in 1925, an article by Russell A. Birdwell published a large photo of Aye, announcing that she had failed an intellectual-themed screen test.  This was followed by an embarrassing ad for a Los Angeles plastic surgeon as well as a bizarre photo op of her kissing a trained bear on the mouth.
In 1927, Aye once again returned to the stage in “The Ruined Lady” followed by the risque play,”The Married Virgin.” The latter’s plot sparked controversy as to whether it was trash or a morality lesson. After the play’s rocky start in San Francisco, the production moved to Los Angeles. LA Times’ Edwin Schallert wrote:
“The best that can be said for it is that the worst has been done to it, and that no great loss has been occasioned because of this.”
Aye responded to his criticism by saying, “If I felt the play was bad, I should not appear in it. But I do not think so.”
By 1930, Aye‘s parents were divorced and her brother Jr. lived at home with his mother. According to the 1930 and 1940 U.S. Census records, he worked as an actor and writer for the motion picture industry. To make ends meet, Marion Aye worked as a theatrical actress and nightclub performer. She also fraternized with other stars who were no longer considered high profile celebrities. In 1932, her address was the Mayfair Apartments at 1760 Wilcox Ave. 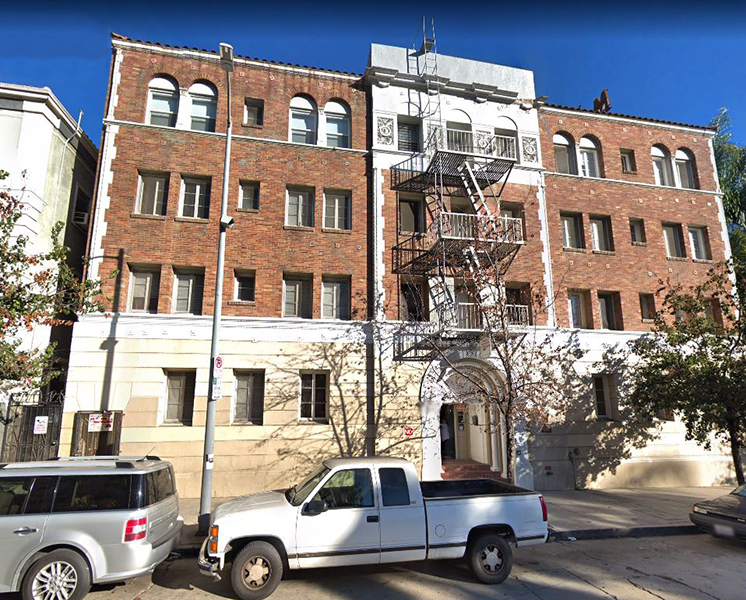 She heavily relied on Wilson’s monthly alimony checks. Wilson, however, died in 1933 at the age of 36 from an illness. After his death, she fell into a depression and temporarily moved in with her mother at 6370 Franklin Ave. On May 16, 1935, she attempted suicide by taking poison. 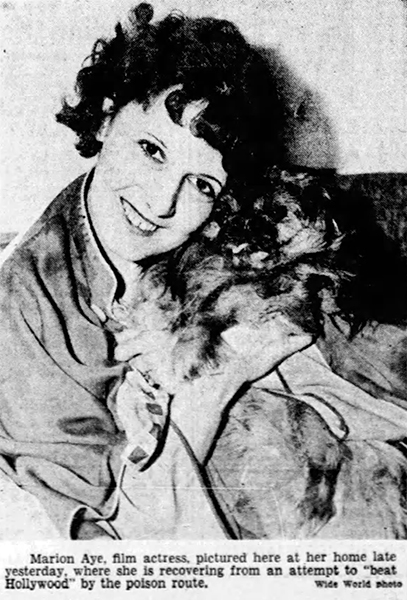 “Friends console me by talking about what I used to be,” she told the Los Angeles Times. “But I’m sick of living in the past.”

Her mother Eloise was more optimistic, saying, “She was just discouraged. Everything will come out all right. I know.”

On September 22, 1936, she married Ross Wilson Forrester, a character actor who had also been in the “White Collars” theatrical cast many years ago. At some point after their marriage, he left the acting field to work for the Hughes Aircraft Company while Aye continued in vain to make a “comeback.”

After mother Eloise died in February 1951, Aye once again fell into a deep depression and began to express suicidal thoughts. Forrester, her husband, did not take her threats seriously. Then on July 10, 1951, after failing to get a role on a television play, she consumed a fatal dosage of bichloride of mercury while staying in a Culver City motel. When her husband discovered what she had done, Aye was “in a semi-conscious state.” Her last words were,  “I dropped one of the tablets on the floor and I’m afraid the dog will get it.” Forrester called the medics and Aye was rushed to a hospital. By this time, she had slipped into a coma.

She passed away on July 21 (11 days later) and was quietly buried next to her mother at Forest Lawn Glendale. In 1953, Forrester married Pauline Garon, another forgotten silent film star, who  happened to be one of Aye‘s closer friends. They stayed married until his death in 1964. 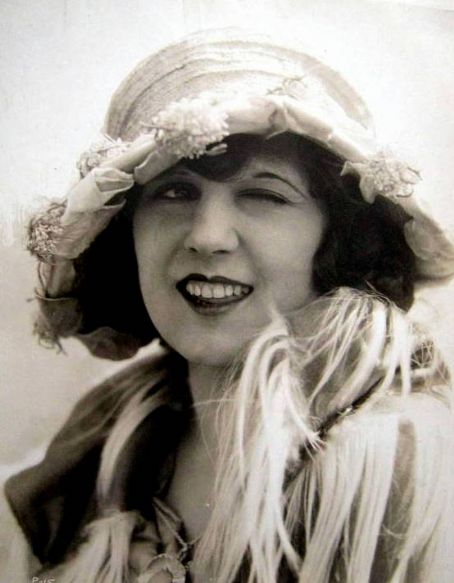