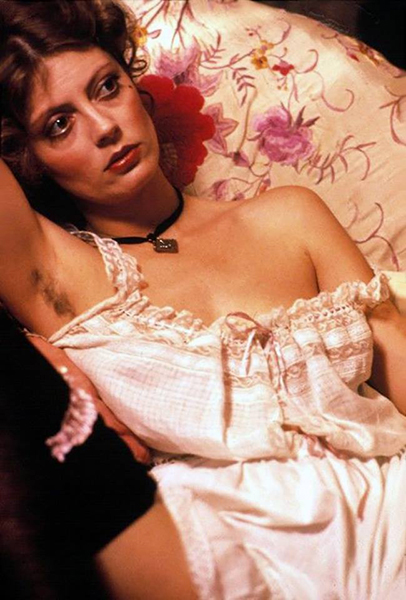 “I’ve stripped…nude scenes have nothing to do with modesty…you’re the only one exposed. Being unclothed is simply having nowhere to hide.” — Susan Sarandon

“My face – I feel I’ve earned it. When I see pictures of myself from when I was younger that face looks blank to me.” — Susan Sarandon

“Hollywood isn’t expected to lead. They follow the polls, like politicians. It’s hard to have the courage of a vision in that business.” — Susan Sarandon

“I’m proud that I’m still in the business and happy about it. And that I’ve learned so much from my failures. I still haven’t gotten it right, so I’ll keep doing it for a while. It takes so much to fight the inertia that’s natural to me. Acting keeps me moving and asking questions and seeking, so I’m pleased with that. I’ve had such a varied career. If my life were a charm bracelet, I’d have a lot of different charms on it.” — Susan Sarandon