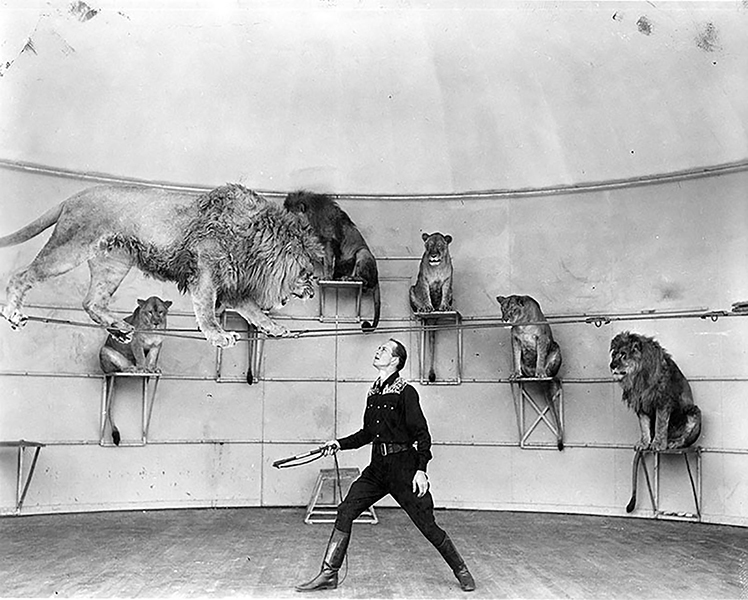 “They would murder me if they thought I was afraid of them. And I’ll tell you the truth – I am. Man, when I’m in there with those cats, I’m acting.” — Dick Walker, the resident lion tamer at Jungleland in Thousand Oaks. Here he is in 1960, preparing for an appearance at a fair in the San Fernando Valley. (LAPL 00120006)

In 1959, Erskine Johnson described Walker as a mid-thirties WWII war hero, who wore a toupee. He was born and raised in Montana and had originally aspired to be a mathematician. When the U.S. entered WWII, Walker entered the military and saw heavy combat. Walker told Johnson that he was a “Purple Heart Marine Veteran of Iwo Jima.”

After returning home from the war, Walker ended up in Southern California as a restless young man. He visited Jungleland and became fascinated with the park’s lions. He then resolved to join the circus because it appealed to his sense of adventure. Jungleland’s chief lion tamer Mabel Starke hired him to clean the cages and care for the animals. (Some accounts claim that he got his start working for free.)

Over time, Walker’s tenacity impressed Starke, and she agreed to train him as a lion tamer. At first, he was awkward and was occasionally injured on the job. Starke’s stinging criticism may have also injured him, too, because he ended up secretly taking ballet lessons under the G.I. Bill to improve his precision and grace.

In the 1950s, Walker married his sweetheart Dolores, whose mother (Ruth White) worked as a gorilla trainer with the Ringling Bros. circus. Before long, they adopted a son named David.

By 1958, Walker had become Jungleland’s premiere lion tamer. He made his television debut in Danger Is My Business (1958). The following year, he appeared in the Victor Mature film, The Big Circus (1959).

He continued to appear around Southern California until Jungleland closed in 1969. He then “did the math” and summarized that there really wasn’t much of a future in the lion taming business. In 1975, he changed careers and went to work as a computer expert in Santa Maria, California.