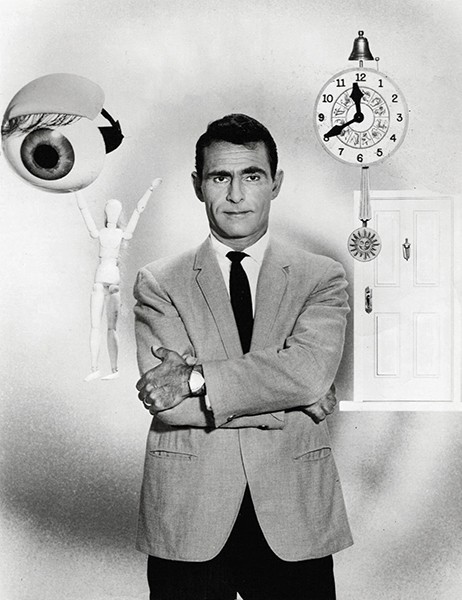 “There is nothing in the dark that isn’t there when the lights are on.” ― Rod Serling

“The new form is the no form. In terms of literature, in terms of the motion picture maker, the new form is to wing it. Get that formless piece of clay and do it anyway you want. Don’t look at the way Rodin carved and don’t look at the way any of the masters carved or painted or wrote. Find your own milieu. If it comes in the color of purple, with mobiles hanging from the sky, if that’s your bag, you do it. Why are we to say that’s wrong? In terms of that then, professors today should know what the young writer’s problems are today, at least, vicariously, and should also say don’t preoccupy yourself, don’t tear hair, don’t fret, don’t pull off your shirt in tatters because you’ve missed a comma, because you have a run-on sentence, because you split an infinitive. The hell with all that. What is of the essence, what is key, what is major, is what have you put down as an idea. This is what’s important.” — Rod Serling

Here is an interview with Serling from 1970:

“It is simply this. I have lost creative control on a series that I created. What the show is going to be now is ‘Mannix’ in a cemetery. I’ll still be fronting it, giving my little spiel, but the title is strictly a misnomer. It won’t be Rod Serling’s anything anymore. Contractually, I have no control at all on what goes on the screen. It was always that way, but I never knew it. Frankly, I didn’t even look at the contract when I signed. And for that I guess I have to blame my ego. I figured, well, obviously I would have control on the show. Gradually, after we went on the air, I began to realize the position I had allowed myself to be placed in. The people at Universal Studios found me, thereafter, to be irascible, a persistent gadfly, but with, I believe, some justification. I suppose I could just say I’m leaving, and then they’d wave that contract at me. But I won’t publicize the show. If anybody is kind enough to write fan letters to me about the show, I’ll forward them on to NBC and Universal. So I’m not actually washing my hands of the show. I’m just toweling them off.” — Rod Serling

“I’ll be standing in front of the cameras – 5 feet 5 of solid gristle. Otherwise, except for the five shows I wrote out of the 15 for next season, I won’t even set eyes on the material. I have no say-so in choosing the actors. My main objection is the way they want to change the show – to make it more ‘suspenseful, they say. There was even rash talk of changing the title to ‘Rod Serling’s Suspense Gallery.’ For all I care, they can call it ‘King for a Day.’ All they want now is ‘suspense’ and wailing winds, which isn’t what ‘Night Gallery’ was ever supposed to represent. Suddenly, I’d look at a ‘Night Gallery’ film and I couldn’t recognize my script. I couldn’t ever find out how or where it had been changed or who did what. And, typically, nobody would admit to not liking my words. I could only sense that they didn’t want the more thoughtful, cerebral items. The type of script that won an Emmy for ‘Night Gallery,’ for instance, is exactly what they don’t want now. What they want now, I gather, is the supernatural but with action. You don’t walk past a cemetery – you’re chased. Typically, since ‘Mannix’ achieved higher ratings opposite us, the idea is to imitate their formula instead of beating them with thought and quality. I must say they’ve been cordial about it. All smiles. They want my presence but not my pen. They consider having me front the show as a plus. Actually, they’re patting me on the head which, considering my height, isn’t too hard to do.  I can only say now that the hallmark of next year’s series should be a glittering inconsistency – some lovely, some lousy.” — Rod Serling