“You see I don’t know much about acting. I’m an entertainer, or that is how I have always thought of myself in the past. So what I do in a film…is to try to react as honestly as I can to what people say to me in each situation.” — Ann-Margret

“I have been called a female Bobby Darin. I can’t understand this, because I have never seen Bobby Darin work. I move around because — well, I feel like moving around.” — Ann-Margret in 1961.

In the photo, she is auditioning for Dick Pierce (far left) of RCA records. Scott Smith is on the piano. 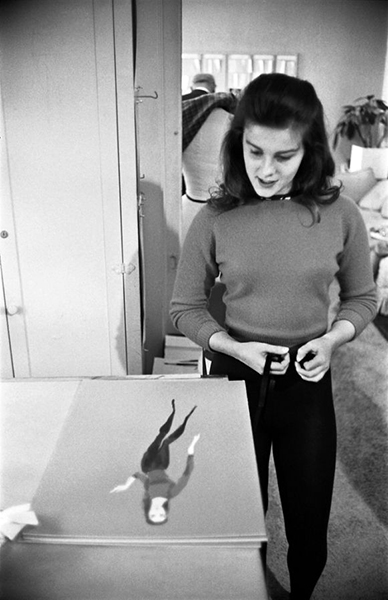 “I’ve been single-minded about it and I’ve had to strive to achieve it ever since. Thank heavens, my parents understood my desires and my ambitions and never tried to make me into anything else. It was just the opposite; they helped me in every way they could and this wasn’t always easy. My father is an electrician and although we were never poor, we didn’t have much money to spare for all the singing and dancing lessons I took.” — Ann-Margret

“She makes you wonder whether to give her a stick of gum or a bracelet.” — George Sydney, director of Bye Bye Birdie and Viva Las Vegas

“I always have genuine emotions. I really feel all the things the character I play feels. I love the experiences I have. I enjoy feeling all these emotions which I haven’t experienced in real life, but it is extremely exhausting this way.” — Ann-Margret

“My inhibitions all leave me when I start to sing and dance, but the same thing doesn’t happen when I act. It is a very different thing then. I feel the way I would if it were really happening to me. I don’t know whether this is the way it should be, but it is how it is.” — Ann-Margret

“I love to come to work every day. It is a gas! And if I can go home completely exhausted, I’m happy. Otherwise I’d often be tied up in one great big knot. Speed unwinds me. I don’t drink or smoke, so when I’m nervous or tense I go out on my motorbike and ride around for an hour or two. That relaxes me.” — Ann-Margret

“We both felt a current, an electicity that went straight through us. It would become a force we couldn’t control.” — Ann-Margret

“Cities have personalities and Las Vegas could use a psychiatrist.” — Ann-Margret

“There is nothing new in my life. I have nothing to say.” — Ann-Margret

“When I find I can’t live without somebody, I’ll want to marry him. That hasn’t happened yet. He’s got to dominate the household. He’s got to be very strong inside and tell me what to do, because I can’t stand making decisions. And like every woman, I suppose, I want someone who will love me more than anything else in the world.” — Ann-Margret

“I have so many moods, I would be very hard to live with. I must have a man who completely dominates me. I want to be dependent on him, with no ifs, ands or buts.” — Ann-Margret

“Why do people complain about violence [in the movies]? Don’t they realize that violence is an important part of everyone? The animalistic side – why does everyone want to cover that? They get embarrassed. That’s the greatest part of you.” – Ann-Margaret

“Inside Ann-Margret there has always been a funny person wanting to come out.” — Allan Carr, her personal manager in the 1960s  and 70s.

“Ann-Margret is a very little girl who closes a bedroom door, looks into a full-length mirror and becomes something great.” — Pierre Cosette, her former co-manager.