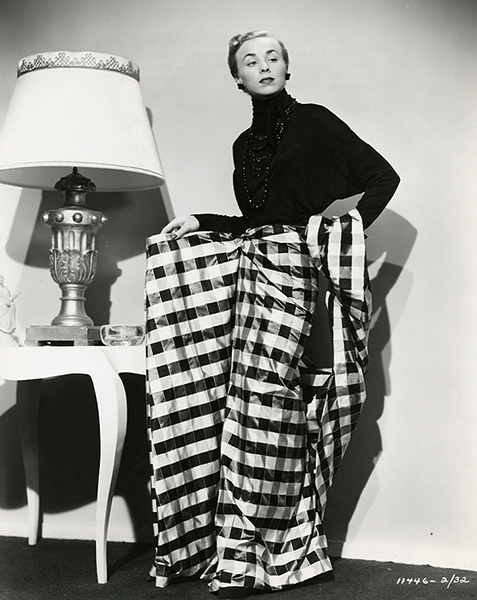 Gini Adams, the slim young woman who models Irene’s sophisticate clothes, might have been an Olympic swimming star had it not been for the war.

“I was training for the Olympics with the Los Angeles Athletic club swimming team when the Olympics were called off,” she said here Tuesday while having a gray rince on her short, blonde hair.

Soon after, while she was teaching swimming at the Beverly Hills Hotel, a model’s agent spotted her and asked her to model for him.

“That ended my professional swimming,” she went on.

For several years she did photographic modeling. Then came her job with Irene, who is the leading designer for Metro-Goldwyn-Mayer as well as the head of her own wholesale business.

“I told a sort of white lie to get the job,” she confessed. “I told them I had done lots of fashion shows, although I had done only two since most of my jobs were for fashion photographers.”

This is her second visit here to model Irene’s clothes.

“I never tire of Irene’s clotes,” Gini said. “They are the type of clothes I personally like.”

She admitted that right now she’s most excited about a trip to New York.

“It will be my first visit there,” she continued. “And I want to eat at the automat, see the Rockettes, and all the other things tourists want to see and do.”

When asked if she thought swimming was responsible for her sleep figure she said no.

“Actually I weighed much more when I was working as a county lifeguard,” she replied. “I weighed 148. When I first started modeling I went down to 110. Now I weigh 120.”

The only thing about the traveling job that she doesn’t like is that she gets lonesome for her test pilot husband. She flew back to see him last weekend after being away for five weeks. Her tour will last about three more weeks, and then it’s home to her husband and apartment.