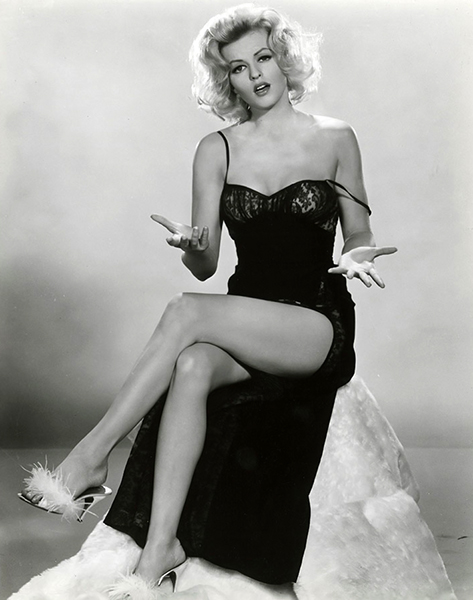 Meri Welles was born Mary Janet Carsey in Dallas, Texas, on February 27, 1937. Her father Charles was car salesman. Welles was a middle child with an older sister and younger brother.

When she was around 18 years old, Welles married Gene A. Cates. However, their marriage was short-lived.  The bright lights of Hollywood lured Welles out of Texas to Los Angeles following her Texas divorce.

Her first break was in a small role in Roger Corman’s Little Shop of Horrors (1960). During production, she met and fell in love with one of producer Roger Corman’s stock players, Mel Welles (real name  Ira W. Meltcher) and on May 29, 1959, the couple married in Los Angeles, CA.

The following year, she appeared in an episode of Alfred Hitchcock Presents.  When Mel Welles moved to Europe to find work, Meri Welles left, too. In Rome, she worked as a featured extra in Cleopatra (1963) and appeared in a few televised Greek tragedies for a major television network. She also appreared as an extra in The Pink Panther (1964). After her marriage to Mel Welles fell apart, she came back to Hollywood and was cast in a small role in A House In Not a Home (1964) with Shelley Winters.

In 1964, Jospeh Levine announced that he planned to make a biopic on Jean Harlow starring Carroll Baker. Low budget producer Bill Sergent Jr. jumped on the bandwagon by announcing that he, too, planned to make his own Harlow biopic.

“The next day, Sargent and his staff started a mad dash to get their version of Harlow on the screen first.

“They viewed dozens of actresses before signing two relatively unknown players and putting them under exclusive contracts.

“Finding their acting prowess inferior to their physical endowments, Sargent sent them both a dramatic coach, who prescribed eight-hour-a-day sessions for a month.

“The producer paid for the lessons and advanced each $200 a week spending money.

“One of these incipient Harlows, stauesque blonde Meri Welles had caught Sergent’s eye washing Elizabeth Taylor’s back in a scene from ‘Cleopatra.’ She had also caused a minor stir in Hollywood several months ago by stalking into a casting office and demanding an audition for one of Polly Adler’s prostitutes in ‘A House Is Not A Home…’ That day, she wore a sweater that barely reached the mid-point of her thighs, and nothing else, no skirt, no shoes, no stockings. She won the role.”

Or did she? Weeks later, Sergant hired Carol Lynley to play Harlow.

Unable to get a foothold in Hollywood, Welles studied acting under Lee Strassburg and Lee Meisner but work was hard to come by.

On August 29, 1970, she married Michael Myer Moses in Riverside, CA. By this time, she had dropped her stage name and became Mary Carsey again. In 1971, she starred in a stage version of Cabaret in Desert Hot Springs, CA.

By 1972, she was back in Texas. When Betty Hutton dropped out of a dinner theatre production of “Here Today” in Lubbock, Texas, Mary Carsey took her place for the run of the show.  Carsey died later that year,  on August 27, 1973, at the age of 36. An online source claims that it was from a heart attack. She left behind two children from her previous marriages.

One thought on “Meri Welles”